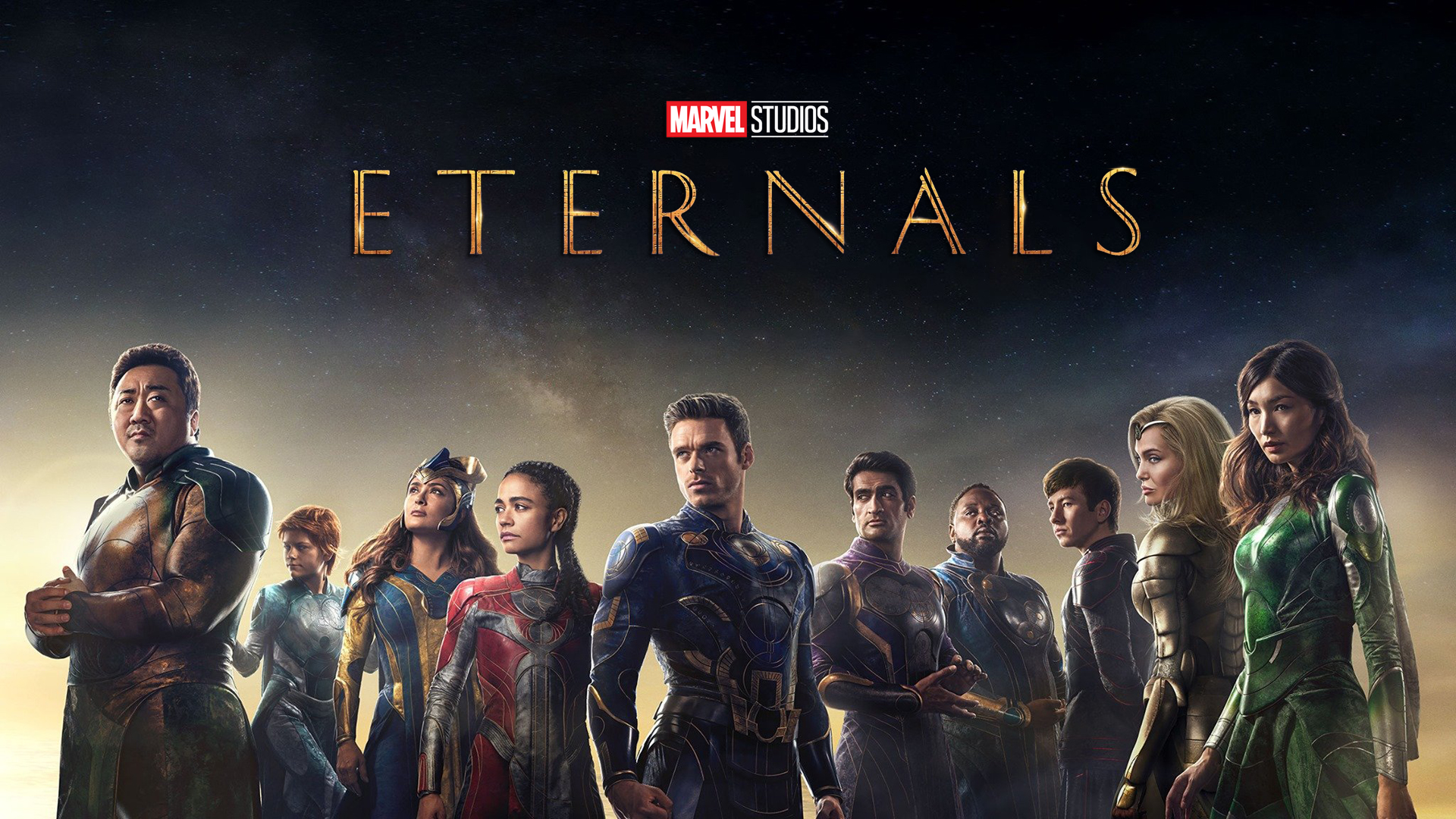 I’ve been looking forward to this for the past year. Not just because I’m an Eternals fan, but also because I believed that the debut of this particular group feature film would make up for the failure of The Inhumans, the one entry which qualifies as a dud in the Marvel Cinematic Universe’s history. With big names like Salma Hayek and Angelina Jolie attached to the film, one would think that’s a cash-cow guarantee. Unfortunately, life doesn’t come pre-packaged with guarantees and, appropriately, neither does Eternals. Yes, the film contains many firsts for an MCU movie. But while it’s not a bad film, it doesn’t hit the mark like most MCU films.

PLOT: The Eternals have been among humanity for thousands of years. They look human, but their origins are shrouded in fable: They come from the planet Olympia and 10 of them were sent to Earth in 5000 B.C. by a group of gigantic armored cosmic beings called the Celestials in order to combat Deviants, monstrous predatory beings who threaten to wipe out humanity. The Eternals are the illusion-casting perma-child Sprite (Lia McHugh); the energy projecting Kingo (Kumail Nanjiani); Ajak, the group leader, fast-healer and the Prime-Eternal capable communicating with the Celestial head Arishem (Ajak is Salma Hayek); Ikaris, the titan-like stoic carrying secrets (Richard Madden); the empathetic Sersi (Gemma Chan); Phastos, a genius inventor (Brian Tyree Henry); the dependable Makkari (Lauren Ridloff); the wry and cynical Druig (Barry Keoghan); the mighty Gilgamesh (Don Lee); and the battle-ready Thena (Angelina Jolie).

Eternals are immortal (though they can be killed), nigh-indestructible, and possess individual powers of their own: Sersi can alter the state of matter (turning a Mack truck into harmless flowers), Makkari is a speedster, and Ikaris is basically Superman. They’ve been on Earth for 7,000 years, the last 500 of which they’ve spent apart, living separate lives on Earth after having defeated the last of the Deviants in the year 1521. Though they’ve been involved in events in human history (from the fall of Babylon to the bombing of Hiroshima), they’ve not gotten attached since part of their mission was to allow humanity to develop naturally.

By 2021, the Eternals on Earth are akin Russian sleeper agents or spies from one of the Jason Bourne films: Living unassuming civilian lives for the most part until they’re activated for a mission. Sersi is living in London as a museum researcher with her boyfriend, Dane Whitman (Kit Harrington); Ajak lives in a house in rural South Dakota, and Kingo (the least civilian of all) is the biggest film star in Bollywood movie history. A series of worldwide earthquakes coinciding with the re-emergence of some of the Deviants brings some of the Eternals back together, forcing Sersi to reveal the truth of her existence to Dane, who up until that point, couldn’t quite understand the distance in their relationship. The appearance of Ikaris and Sprite reunites the others, taking them on a worldwide journey that reveals their true purpose and, without revealing details or spoilers as to why, leading to an inevitable showdown with their Celestial “masters”.

MY TAKE: The failure with The Inhumans was because it had nothing that connected it to anything established in the MCU. Eternals avoids that by mentioning Thanos (who actually IS an Eternal), incorporating the Blip into the plot, and explaining (so far as they know) why they never got involved in affairs, such as aiding the Avengers. However, the former gave their characters development over the course of eight episodes, something this film was mostly unsuccessful at. Sersi is the central character of the film and is given the most attention. McHugh’s Sprite is angsty, androgynous, and gives the group some needed spunk. Kingo is a narcissistic movie star, Phastos gave up on humanity and lives in suburban America as a parent in a gay marriage. Hayek, who didn’t get top-billing, didn’t make the most of her screen time to make the gender-swapped Ajak into something better than a stock character tribal chief. The same goes for the film’s biggest box-office draw, Angelina Jolie. Her Thena, who in the book is the Prime-Eternal and first cousin to Thanos, is too war-like and borderline obsessed with battle.

The film does contain several “firsts” for the MCU: The lovemaking scene between Eternals is one example (although reports of it being a sex scene are highly exaggerated as it wasn’t explicit with nudity), a same-sex African-American couple with a child, a hearing-impaired super-hero, a group where half of the members are women and one is at the helm, its main cast is intentionally diverse (with only four White characters of the ten Eternals), and the addition of three (technically, four) new super-heroes in the MCU via the post-credit scenes.

I mentioned earlier that it has elements of Jason Bourne films. Well, Highlander can be added in there as well since these characters are also immortals living secret lives and both films began with scrolling narrations. The visual effects were great, especially the battle scenes involving either Sersi or Ikaris, though the latter’s battle pose and flat laser-eye blasts are derivative of Superman (who actually gets a mention in this film). The Deviants didn’t get much characterization due to being a predatory species. Additionally, as monstrous as they’re supposed to be, they were about as frightening as those insect-like alien monsters from Starship Troopers (1998). 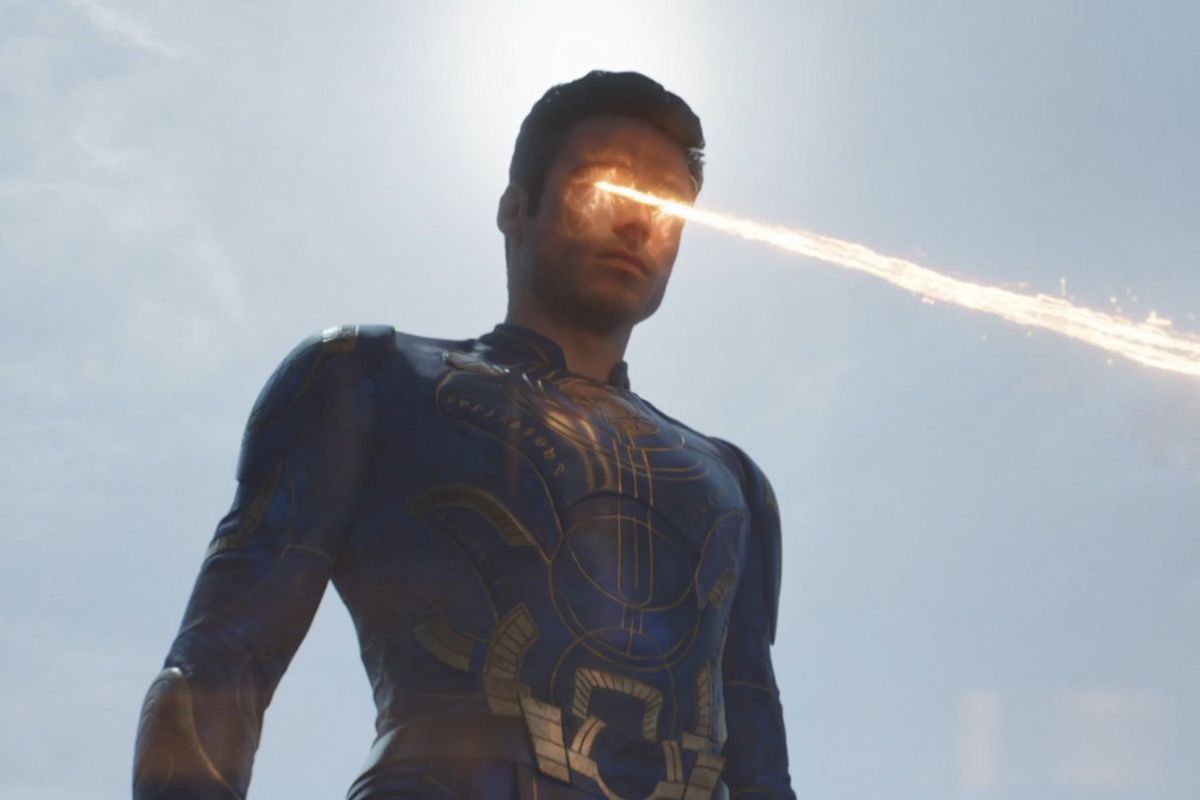 Though it does connect with the greater MCU, it would’ve helped if it had something that lead into it so that audiences could’ve been prepared for it. It seems to allude to parts of the MCU, like the rings used by the Celestials and Phastos resembling the ones used in Shang Chi or the Deviants living under the sea, which could be a reference to the rumored future MCU appearance of Namor the Sub-Mariner. Additionally, references to the source material are made, such as the conflict between the Eternals and Deviants. However, the film takes several liberties with source material, which I expected, but not to this extent. The Eternals in the film and their history are inspired by the alternate versions shown in Jim Krueger’s Earth X and the retcon to Eternals history done by scribe Neil Gaiman.

The last thing I want to comment on is director Chloé Zhao. Had she involved less characters, the story wouldn’t feel like a glass with more contents than it’s designed to hold. But given that an Eternals sequel is slated to be in the works, she’s got a chance to get it right the second time. I do like how the progression of existence is used heavily as a theme. It’s manifested via the flashback scenes, and in music as the film is respectively book-ended with “Time” by Pink Floyd and “Feels Like the First Time” by Foreigner. I personally rate the film as just OK. It’s not as bad as critics made it out to be, but it’s not a slam-dunk/home run like most of the MCU films are either.