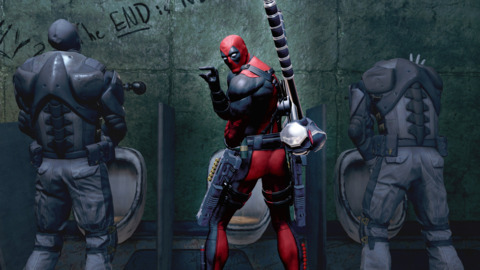 Deadpool Is Hitting Theaters February 2016! Here Are The Reasons Why (Video).

Yesterday, word came down that screenwriters Rhett Reese and Paul Wernick (Zombieland), first-time director Tim Miller, and, yes…actor Ryan Reynolds are on board to start production on an upcoming Deadpool film. Which, of course, is based on the Marvel comic book character of the same name.

With a release date scheduled for February 2016, it would seem that Deadpool’s distributor, 20th Century Fox sat on their hands long enough that Rhett Reese decided to ask the Internet for help…

Team Pool needs your official ‘vote’ of support. Let’s break the internet. RETWEET if you would buy a ticket to the DEADPOOL MOVIE.

That rallying cry was given a shot in the arm when it was coupled with the overwhelming excitement for Tim Miller’s leaked test footage (below) for a Deadpool film that, at the time, seemed highly unlikely.

Meanwhile, Fox’s most recent Marvel-based franchise, X-Men: Days of Future Past, cleaned up at the box office, making over $700 million worldwide. Deadpool’s well-documented off and on affiliation with the X-Men, allows Fox to extend their franchise beyond costly ensemble tentpoles. After, DOFP‘s franchise resurrecting box office haul, something tells me that Fox saw the money sitting on the table, put two and two together and got Deadpool.

So what is the final takeaway from this (besides the prayers of Deadpool fans being answered)? Well, I think Ryan Reynolds has already put it best:

“There was such an overpowering reaction to the footage, you sort of feel like, ‘Oh, so we weren’t crazy for our reasons for loving this character, for loving this role.’ It’s interesting to see the power of the Internet…it’s neat that Twitter and Facebook and Instagram can move mountains when used in the right way.”