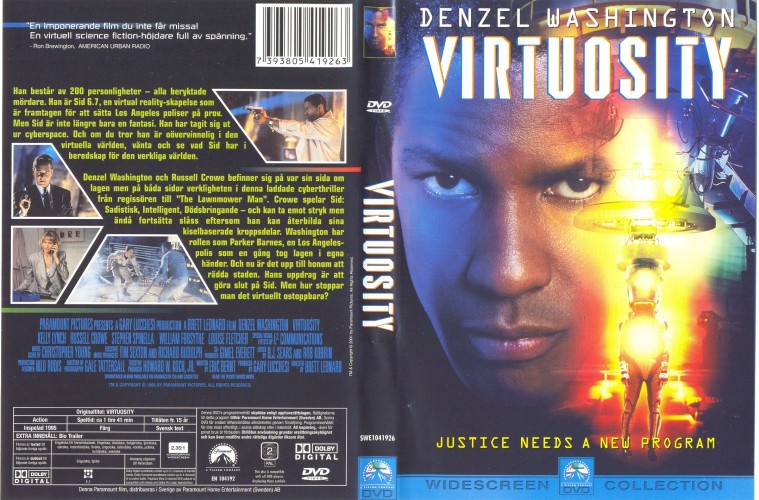 Now that Liam Neeson has had his turn at theatres it’s time for another cinematic stalwart to hit the screen. This time it’s Denzel Washington stepping up to the plate in The Equalizer, a film that reunites Washington with director Antoine Fuqua. You may remember Fuqua as the man who directed Training Day (2001) and helped Washington grab another precious Oscar.

In The Equalizer Washington plays Robert McCall, a man with a dark past trying to live a quiet life of normality. That is until he sees a young woman being abused by Russian gangsters and … well, let’s just say they have a very bad day after McCall gets back into his old habits.

But what about the days before Washington was a go-to action star? What movies solidified him as the bona fide man’s man of cinema? Well, one of those movies was Virtuosity (1995).

Even at the time, Virtuosity was weird but also groundbreaking. It featured Washington as a cop jailed for an overzealous assault and the terrorists that captured his family. He then gets pulled out of jail to go after a computer program that transplants himself to real life. The kicker? This program is an amalgamation of just about every major psychopath to ever walk the earth.

Yeah, it’s really stupid. But the program is played by Russell Crowe (another Oscar winner) and the movie is a riot of 90s computer ignorance (just like this bad boy).

So why is it here? Well, it’s got one of the most hardcore Denzel Washington scenes ever, that’s why. Below is this week’s Great Moment It’s a wild scene that is not for the faint of heart, and remains one of my favorite Denzel Washington freak outs ever.