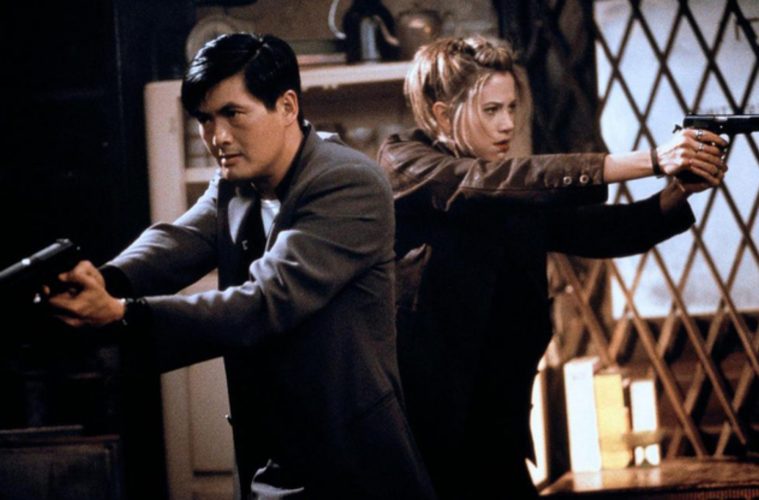 The Best Action Movies Of 1998 – ‘The Replacement Killers’

Anyone who loves Asian action cinema will instantly know the next two iconic names… Chow-Yun Fat and John Woo. Famed for their legendary blockbuster action movies such as ‘Hard Boiled’ (The greatest Asian action movie ever made) and ‘The Killer’. Woo, for me, is second only to Michael Bay is the list of greatest action movie directors on the planet. Each has his own unique styles, both with camera work and editing. But above all else, both have a way with action scenes that make me weep with joy. Everyone has their own favorite action filmmakers, but Bay and Woo are my personal tops. So imagine my delight in the 1990s when John Woo finally hit the USA action scene with the force of a nuclear weapon. First with the classic Jean-Claude Van Damme thriller ‘Hard Target’, then the magnificent ‘Broken Arrow’, and THEN his greatest work, the masterpiece that is ‘Face/Off’ (One of my favorite movies). And then in 2000, he blew me away once again with the incredible ‘Mission: Impossible 2’. Possibly the coolest action movie ever made, and Tom Cruise’s coolest performance. But for all this classic Woo, Chow-Yun Fat took longer to come to the US. But in 1998, both Fat and Woo teamed up yet again to deliver a jewel in action cinema, the perfect ‘The Replacement Killers’.

Woo may serve only as a producer on ‘The Replacement Killers’ (The brilliant Antoine Fuqua has directing duties), but his style is stamped all over it. The spinning hero, the double guns and the dramatic slow motion action shots we all know and love from Woo. In the first minutes of the movie, we’re treated to Chow-Yun Fat in his first American movie, gunning down henchman in a club and taking out his latest target. And I’m telling you now, he has never been better! Suited and booted, with all the cool and swagger we love, CYF lays waste to his enemies with pure ferocity and grace, with the wonderful Mira Sorvino by his side and kicking just as much ass.

Chow-Yun Fat stars as John Lee, a loving family man who is being blackmailed into assassination jobs by a rutless crimelord. With his family in danger, Lee takes on every job, knowing that his family will be safe once he completes his missions. But when the crime boss witnesses the death of his son at the hands of a cop (played by action movie legend Michael Rooker), he demands Lee’s skills one more time, to exact revenge against the cop. This time, however, the kill is more than Lee can live with. Refusing to take the life of his target, Lee takes hostage an expert forger, Meg Coburn (Mira Sorvino), to create documents to help his family hide from his enemies, as he readies himself for the bloodiest takedown of his life against the oncoming assassin replacements. With the help of Coburn, the two aim to bring down the criminal empire and get Lee’s family to safety.

Any action movie fan knows that there are gems hidden under rocks sometimes. We see superhero movies and Schwarzenegger everywhere. But underneath it all, we find wonderful movies that have been mostly lost to the world, movies that deserve more love and attention. ‘The Replacement Killers’ is one of those very movies. 80 minutes of pure death-defying action, with all the style and punch of a John Woo production, with Chow-Fun Fat better than ever. His Asian movies are adored, especially the two I mentioned earlier. But we know Asian cinema can be quirky, and Fat can get mixed up in some very silly dialogue and cheesy stuff in his movies. But not here. Here, we get the great man in a black suit, cool as a dead eskimo and more lethal than ever. No cheese, no nonsense, no kissing babies. Just Chow-Yun Fat spilling the blood of every bad guy who crosses his path. That’s the stuff dreams are made of. And if it wasn’t enough, we get the glorious Mira Sorvino, who ruled the 90’s by winning an Oscar, stealing our hearts with Romy And Michelle, and starring in one of the best horror movies ever made, ‘Mimic’, directed by Guillermo Del Toro. Sorvino in the 90’s is everything. Beautiful, sexy, kind-hearted and a tough kick-ass woman to boot. And in this movie, she puts all of that up on screen. She matches CYF toe to toe, always by his side and killing just as many bad guys as he does. And her performance adds a gentle beauty to the movie, as her character Meg guides Lee along a righteous path. CYF is absolutely glorious in ‘The Replacement Killers’, but Mira Sorvino adds just as much. That’s why I’m such a fan of them both and this movie.

With powerful John Woo action, Chow-Yun Fat at his best and a stunning performance from Mira Sorvino, you cannot miss ‘The Replacement Killers’. Check this movie out now!