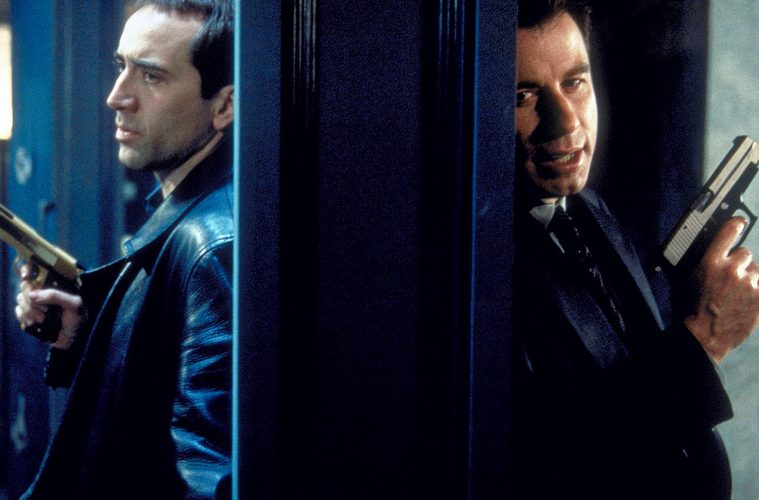 1997 was a great year for action cinema. Not just a great year, but one of the best years. Putting thoughts together on the many action classics and forgotten gems to be released that year has been a lot of fun so far. So much quality action cinema came out that year. And among those movies are several favorites that have remained in my personal list of all-time fave movies. One of them stands out especially… The John Woo action masterpiece ‘Face/Off’, starring Nicolas Cage and John Travolta. Easily one of the greatest movies ever made.

Nicolas Cage at the center of the 1990’s was a surprise star to emerge into action cinema. Known for his quirky comedies and well-loved dramas, Cage embarked on a whole new adventure by becoming an action star in Michael Bay’s ‘The Rock’. For me, ‘The Rock’ has remained the greatest action movie ever made, thanks to Bay’s unbeatable action direction, the incredible action sequences, the heart pounding Hans Zimmer score and the wonderful pairing of Cage and Sean Connery. With Cage on spectacular form as a bone fide action star in the ‘The Rock’ from 1996, it was inevitable that he would continue in the genre after the massive success of that movie. In 1997, he would give us two more of the greatest action movies ever made… The magnificent ‘Con Air’ and of course ‘Face/Off’. Trying as hard as I can, I can’t think of very many movie stars who put out two or more classic movies in one year. The incparable Jim Carrey starred in ‘Ace Ventura: Pet Detective’, ‘The Mask’ and ‘Dumb And Dumber’ all in 1994. The iconic Tom Cruise with ‘Mission: Impossible’ and ‘Jerry Maguire’. And of course Arnold Schwarzenegger had ‘Eraser’ and ‘Jingle All The Way’ also in 1996. And Nicolas Cage was right up there with the three greatest movies of his career, two in 1997. Though some may dispute that, having ‘The Rock’, ‘Con Air’ and ‘Face/Off’ all in two years is pretty hard evidence that this is the strongest period in this great star’s career. Having looked back at both ‘The Rock’ and ‘Con Air’, now it’s time to get face to face with the incredible ‘Face/Off’.

Nicolas Cage stars as Castor Troy, a brutal terrorist who is being hunted by FBI agent Sean Archer, played brilliantly by John Travolta. When Troy accidentally murders Archer’s young son, the FBI agent is determined to bring the deadly killer to justice, eventually leaving his enemy in a coma. With a massive terror attack about to take place at the hands of Troy, Archer is tasked with entering a maximum security prison, posing as the terrorist, in an attempt to retrieve the location of the attack from his target’s brother. Using state of the art medical procedures, Sean Archer is completely transformed into Castor Troy, including wearing the killer’s own face as his own. But when the real Troy awakens from his coma and takes on the role of the respected FBI agent, wiping out everyone who knew of the switch, the two foes are about to face their most explosive battle, coming face to face in the ultimate face/off.

Action movies underwent a big makeover in the 90s. Most classic pre-90s action movies relied on sporadic action scenes, peppered through the movie to flesh out the story. Scenes could range between 1 minute to 5 minutes, with various levels of thrills. But in the 90s, the action set piece was born. An almost uninterrupted car chase, shootout or fist fight, action scenes became a showcase, rather than just a part of the story. Along with the new style of action movie scene was the template of growth. An action movie starts big, then settles into a narrative groove, with following action scenes growing bigger and bigger, all the way to the massive finale. Movies like ‘Terminator 2’ and ‘Die Hard 2’ were among the first of the decade to feature showcase action scenes. And moving through the years, that new way of filmmaking became the go to style for the world’s biggest filmmakers. Three movies that show off that new breed of action movie storytelling are what I love to call the Nicolas Cage prison trilogy, ‘The Rock’, ‘Con Air’ and ‘Face/Off’. ‘Face/Off’ as an action movie is completely perfect. And much of that is thanks to the streamlined action. The airport shootout, the prison break, the speedboat chase etc… All spectacular showcases that anyone with a Blu-ray or DVD copy can skip straight to watching, and enjoy the spectacle. Not just 1 or 2 minutes, but scenes lasting up to 10 minutes each. ‘Face/Off’ is my favorite kind of action movie, I’m a fan of movies with focused epic action scenes, which outdo each other as the movie thunders on. That level of excitement is impossible to beat, and ‘Face/Off’ is the perfect example of 1990s action cinema, showing just how much things have changed since the 1980s.

John Woo has long been greatly respected for his Hong Kong action movies, like the classic ‘The Killer’ and the greatest Asian action movie ever made, ‘Hard Boiled’. His first foray into American filmmaking was for the fantastic Van Damme classic ‘Hard Target’. He then went on to make the incredible thriller ‘Broken Arrow’, starring John Travolta and Christian Slater. Packed with insane action and that powerful Hans Summer score, ‘Broken Arrow’ is still one of the best action movies ever made. But Woo would soon go on to make the most awesome movie of his career. Teaming once more with the legendary John Travolta, Woo brought every classic trademark of his movies into one spectacular blockbuster with ‘Face/Off’. Perfect gunfights, slow motion glides through the air and of course the peaceful doves that fly through Woo’s total chaos and violence. No one puts action on the screen with so much beauty as Woo. And the action scenes here are incomparable. The prison break is especially heart stopping, with bullets and sparks flying everywhere as the hero makes a desperate dash for freedom. The apartment shootout is yet another example of Woo’s expertize in action directing. Big, violent, but with a mix of beauty, thanks to a very touching scene involving Troy’s little boy, set to a soundtrack of Olivia Newton-John’s version of Over The Rainbow. Scenes like that are very rare, making ‘Face/Off’ a one of a kind experience. But above all else is the finale. Going back to an earlier point of 1990s action and evolution in the genre, ‘Face/Off’ takes full advantage of this new need to have a finale bigger than the rest of the movie. And the speedboat chase that ends this movie is beyond magical. From a stunning church shoot em’ up, straight to a death-defying boat chase that pits Archer and Troy together, the finale is something that stands above almost any action scene from the 90s.

Composer John Powell’s score adds much of the excitement and emotion to the whole movie, and just like most movies from that decade, is one of the greatest action scores ever recorded. But it’s in the final chase that Powell’s music springs to life the most. The chase itself is dazzling and beautifully filmed, but the score adds so much more to it. It really is a truly sensational sequence of action and power. It’s the reason I adore ‘Face/Off’ as much as I do. You’d never see that kind of glorious action in a movie these days. Beautifully framed shots of explosive action backed by a raging exciting score, that’s what the 90s are all about. Ironically, ‘Face/Off’ is released by Touchstone Pictures (And Paramount Pictures). Touchstone is a Disney company. It’s ironic because if Walt Disney were alive to make action movies, this is the movie he would have made. John Woo and Michael Bay are the Walt Disney of action cinema. And having followed ‘Face/Off’ is the absolutely gorgeous and spectacular ‘Mission: Impossible II’, Woo proved why he’s a God in the action world. It’s a shame a couple of later American projects would eventually see him turn his back on the US in favor of returning to his roots. Maybe one day he’ll give us another American action masterpiece. Until then, the four American masterpieces he directed will always be more than enough for me. Anyone reading this, you need to watch Woo’s first four US movies (‘Hard Target’, ‘Broken Arrow’, ‘Face/Off’, ‘Mission: Impossible II’) in one day, it’s an experience like no other.

With action movies, it’s easy to push aside performances in favor of action. And with the magnificent action ‘Face/Off’ has to offer, it’d be easy to forgive bad acting. But alas, that is far from the case here. Both John Travolta and Nicolas Cage are wonderful. As a child, I was never a fan of Travolta until ‘Broken Arrow’ and ‘Face/Off’ came to town. With the first, it’s remarkable what a fantastic villain he makes. And to return with John Woo to once again play a villain, but this time with a twist, is amazing. For many people, Travolta is ‘Grease’ and ‘Saturday Night Fever’. For others, it’s ‘Pulp Fiction’ and ‘Carrie’. For me, it’s ‘Face/Off’ and ‘Broken Arrow’. To see him play both the gentle and tough Sean Archer, to the violent and sinister Castor Troy, is a revelation. In my opinion, John Travolta has never been more wonderful than he is in this movie. His switch between both characters is absolutely fantastic. And the exact same applies to Nicolas Cage. With Travolta, ‘Face/Off’ was his birth for me. But with Cage, he’d already established himself as an awesome action star, thanks to ‘The Rock’ the year before. But to have him deliver not one, but two incredible action movies in one year is beyond words. And especially when those movies are ‘Con Air’ and ‘Face/Off’. Just like Travolta, his performances as both Troy and Archer are pure perfection. He plays the duel roles completely different, while keeping the manic Nicolas Cage persona we all know and love. A random yell, a crazed grin and a good ass kicking, that’s what Cage is all about. And he does it beautifully here. What connects both stars is a beautiful performance from the Bourne movies’ Joan Allen. Playing Archer’s wife, Allen brings so much heart and soul to the movie, bridging the gap between awesome John Woo action and touching family drama. If action movies won Oscars, I’d certainly have no problem awarding one to Joan Allen for her role in ‘Face/Off’. One of my favorite performances from a woman in film. Gina Gershon also brings a lot of fun and drama, as Troy’s ex girlfriend and mother of his child. An action movie that brings so much violence needs a lot of heart, and these two women give so much that we almost forget the flowing bullets and blood for a while. There’s so many great acting performances in ‘Face/Off’ that it would take a separate piece to cover them all (Alessandro Nivola from ‘Jurassic Park III’ is also wonderful!). Yet another reason this wonderful movie has the loyal fanbase it has garnered over the years.

1997 is an almost impossible year to compare with, in terms of action movies. And ‘Face/Off’ not only stands as my second favorite movie of that year, but as one of my top ten favorite movies of all time. If you want to see an action master at work, with two of the finest leading men in cinema, beautiful performances from some amazing women and some of the most incredible action you’ll ever see, ‘Face/Off’ should be top of your viewing list right now! As for the point of this being my second favorite movie of 1997, come back soon to see which movie has the almost impossible task of topping this.