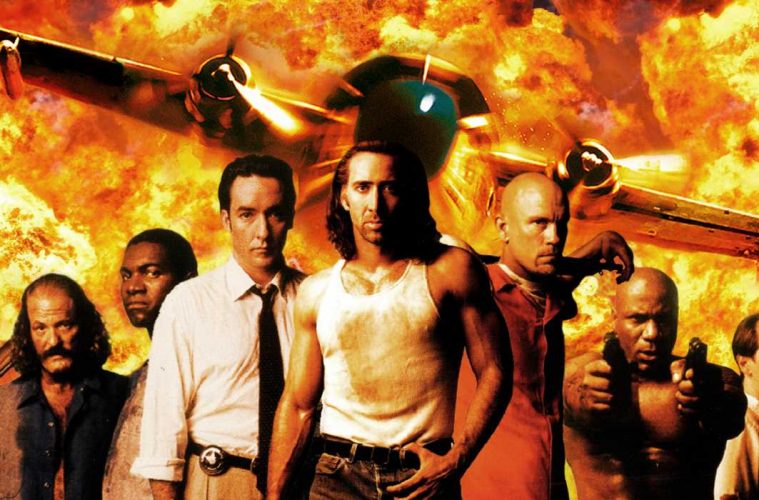 1997 was a heck of a year for action movies. This project started out as a labor of love for me. But dang, the labor has pretty much vanished, with now just total fun for these retrospectives. Time is a strange thing, especially in movie land. Those treasures we’ve enjoyed so frequently over the years never seem to age. But then, out of nowhere, it hits us, like “Wow, this movie is 20 years old now!”. The first time memories of seeing many of these movies always seems so fresh. My first time seeing ‘Event Horizon’ was filled with fear, disgust and the only nightmares I’ve ever had from a movie. George Clooney running over cars in a New York traffic jam, chasing a nuclear terrorist, in ‘The Peacemaker’ still excites me as much as it ever did. And of course Harrison Ford as the US President belting out “GET OFF MY PLANE!” in ‘Air Force One’ is ageless. But has anything from 1997 endured so well as Nicolas Cage’s performance as Cameron Poe is ‘Con Air’? Absolutely not. So let’s take the bunny out of the box for a look back at genuinely one of the greatest movies ever made.

Cameron Poe (Nicolas Cage) is a tough as nails army ranger who arrives home to his beautiful pregnant wife (Monica Potter), ready to begin the next chapter of his life. But on his first night home, Cameron is drawn into a battle of honor, to protect his wife. When the showdown results in murder, the American hero is sentenced to 7 to 10 years in a maxium security prison, with the worst criminals the USA has to offer. Hitching a ride home after parole, Cameron is once again forced into war, as the prison plane he’s traveling home on is hijacked by the brutal killers that fill its passenger manifest. With Cyrus the Virus (John Malkovich), a genius psychopath, leading the pack of evil monsters to freedom, it’s up to Cameron Poe to “Save the f**king day!”. With only the help of a cool, smart ass U.S. marshal on the ground (John Cusack), the awesome hero is ready protect his country and get home to his wife and child. And he’s gonna put that bunny back in the box!

Nicolas Cage has starred in several magnficent action movies, such as Michael Bay’s masterpiece ‘The Rock’ (My favorite action movie of all time), the incredible ‘Face/Off’ and the horribly underrated ‘Gone In Sixty Seconds’. And he’s also turned his hand to many a great comedy, horror and romantic classic too. But Cage has never been greater than he is in ‘Con Air’. Cameron Poe is a fictional national treasure. The most patriotic American to ever feature on screen. Tough, cool, loyal and funny as hell, Cameron is everything a movie fan could ever ask of a big screen character. From the brilliant accent, to the death-defying action, rarely has an action hero been so absolutely awesome. The last half hour especially features Nicolas Cage at his very finest. the star has never shone so brightly as he does during that breathtaking firetruck chase through Las Vegas. “You won’t be getting NEAR my daughter! Now BUCKLE UP!”. What a total legend. He may not have had so great a career of late, but even putting aside ‘The Rock’ and ‘Face/Off’, if all he ever did was ‘Con Air’, Nicolas Cage would still be one of cinema’s most wonderful action stars.

Comparing to a character like Cameron Poe is extremely difficult. But the golden rule of action is, for a spectacular hero, there needs to be a spectacular villain. And they couldn’t have chosen better than John Malkovich as Cyrus “the damn” Virus. After his fantastic performance as a terrifying assassin in Clint Eastwood’s classic ‘In The Line Of Fire’ (Directed by ‘Air Force One’s Wolfgang Petersen) and terrific role as Jekyll and Hyde in ‘Mary Reilly’ Malkovich once again played a glorious bad guy, with Cyrus the Virus. Spitting out seemingly intelligent speeches alongside vicious threats, Cyrus brings so much anarchy and fun to ‘Con Air’, even being the one to actually mention the real-life term Con Air. From start to finish, Malkovich relishes his time as the epic villain, as he leads his band of unmerry men to almost certain freedom. A character like Cameron is hard to contend with, but Cyrus delivers such violent threat and venom that he always feels like a superb challenge to the great kickass hero. And that goes also for the army of brutal killers and thugs that follow him, with a stellar cast including Steve Buscemi as a demonic cannibal, Ving Rhames as the larger-than-life Diamond Dog and action movie supremo Danny Trejo as a sadistic rapist who names himself Johnny 23, the number of victims he’s been setenced to prison for. Also featuring is controversial comic genius Dave Chappele as the brilliant Pinball, who means a grusesome end.

Altough Cameron Poe is all the hero an action movie ever needs, John Cusack provides fantastic support as Larkin, the arrogant and lovable U.S. marshal, who does his all to stop the killers escaping the USA in their plane of doom. The scenes with Cameron and Larkin are some of the movie’s great highlights, with the pair forming a loose friendship in the trail of destruction. Also starring in a major role is one of Ireland’s greatest stars, Colm Meaney, from ‘The Commitments’, ‘Die Hard 2’ and ‘Star Trek: The Next Generation’. Meaney is a total joy as DEA agent Malloy, as he spends the movie hating every single thing Larkin does and constantly remaining untrusting of Cameron. Meaney is known well for his one-of-a-kind comic style, and he showcases it perfectly in ‘Con Air’. And last but certainly not least, are the two passengers whom Cameron Poe lays his life on the line to save… His prison friend Baby-O (Mykelti Williamson) and Sally Bishop (Rachel Ticotin), Con Air’s female security guard. And his beloved wife Trisha, played by the very wonderful Monica Potter (‘Saw’, ‘Along Came A Spider’). Both Williamson and Ticotin bring a lot of heart to the movie, both as characters and also fleshing out Cameron’s character, as a caring hero who refuses to leave good people at the mercy of murderers, even though it could cost him his life and family. And Potter is just enchanting. ‘Con Air’ could easily feel like a one-man show, thanks to Cage’s greatest screen character, but the supporting cast of heroes and villains do so much to aid the movie that it feels like a project reliant on many elements, rather than just selling one star. That’s why this movie stands the test of time, it’s a perfect example of a stunning cast giving their all to deliver top-flight entertainment.

With iconic blockbuster producer Jerry Brucheimer onboard ‘Con Air’, there is one thing that any movie fan expects… Action. And ‘Con Air’ has some of the greatest action we’ll ever see. Not 1 action scene, not 2 action scenes, not even 3, or 4! But 5 incredible and spectacular action scenes make up Bruckheimer’s blockbuster. The hijacking, the Carson City shootout, the helicopter attack, the spectacular Las Vegas crash landing AND that glorious firetruck chase. Rarely has a movie had the thrills and spills this movie offers. The firetruck chase has long been one of my all-time favorite action movie scenes. As I think of it, Nicolas Cage features 4 of my top 10 action movie chases of all time… The Hummer/Ferrari chase from ‘The Rock’, the spectacular boat chase from ‘Face/Off’, the incomparable GT500 finale from ‘Gone In Sixty Seconds’ and of course ‘Con Air’s lethal finale. My love of firetucks began with Sir. Roger Moore’s awesome James Bond thriller ‘A View To A Kill’. And continued with this movie and the absolutely perfect action movie ’12 Rounds’ (John Cena, Aiden Gillen). I love me a massive firetruck chase. And ‘Con Air’ delivers instant perfection with its finale. Every action scene here is perfect. The Vegas landing is a joy to watch, and the Carson battle is action cinema at its best. Director Simon West (‘Lara Croft: Tomb Raider’, ‘The Expendables 2’) showcases his action skills to great lengths, even at times rivaling Michael Bay’s own brand of spectacular blow-em-up thrills. West sadly doesn’t get much praise as a filmmaker, but he certainly always will from me.

As with all classic 90’s action movies, we expect a pounding action-packed score. And ‘Con Air’ has one of the best 5 ever created. Mark Mancina (‘Bad Boys’, ‘Speed’, ‘Speed 2’, ‘Twister’, ‘Money Train’) is one of the best score composers in action cinema. The music he constantly delivers with the action on screen is amazing. The ‘Speed’ movies and ‘Bad Boys’ benefit so much from his love of heart-racing music, with stunning beats and epic tunes that stick in our heads long after the movie is over. But pair him with the legendary Trevor Rabin (‘Bad Boys II’, ‘Armageddon’, ‘Enemy Of The State’, ‘Gone In Sixty Seconds’, ‘The 6th Day’), and you’ve got yourself an action score that just won’t quit until Cyrus the Virus is sent to hell. Again, the final half hour especially gains so much from this music, with its pounding urgency and fantastic orchestra never missing a beat. One of the reasons I adore 90’s action movies is the scores that have come from them. And ‘Con Air’ is almost unbeatable for its action score’. And the classic theme song ‘How Do I Live’ has long since been one of the biggest movie songs in the world. Originally sang by LeAnn Rimes, but sang by Trisha Yearwood for the movie, it’s a stunning song that captures the movie’s themes of love and loyalty perfectly.

While critics were somewhat harsh and website ratings are not where they should be, if anyone asked me what I think of ‘Con Air’, I tell you as clearly as possible… It is one of the best movie experiences you will ever have. Cameron Poe is an action God. Nicolas Cage has neve been better. And the joyful score is something you’ll never hear in a modern action movie. ‘Con Air’ is a blessing from the Gods of action cinema. And at 20 years old, it hasn’t aged a day. It was a masterpiece then. It’s a masterpiece now. It will always be a masterpiece. I could never imagine my movie-loving life without it.

If you think I’ve heaped a lot of praise on ‘Con Air’, be sure to check back for the next choice in our best action movies of 1997. You’ll need a sick bag for the thrill ride!