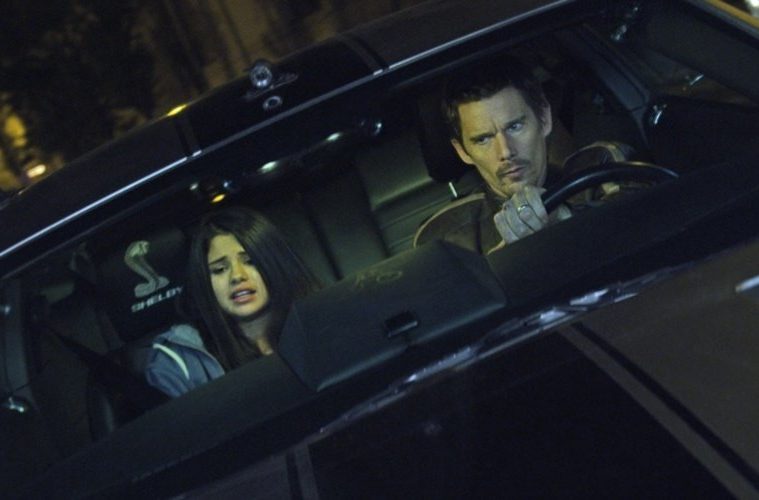 Movies have a way of bringing out the worst in people. And bringing out the stupidity. And very few movies have shown that on the same level as 2013’s action-packed car thriller ‘Getaway’. With reviews ranging from “Dull and lifeless!” to “Oh, Selena Gomez plays herself!”, and to my personal favorite… “It is exhausting, it has too much action!”. That last one always makes me smile. Imagine complaining that an action movie has too much action and leaves you exhausted afterward? Hilarious! Sadly, this spectacular flick has never had the love it deserves. So it’s time to put forward a case in defense of a horribly underrated gem, by presenting its 5 biggest and best assets. And of course, a few glorious clips have been included throughout.

Ethan Hawke is one of the most dependable movie stars in the world. Having been a child star in Joe Dante’s wonderful and sadly forgotten ‘Explorers’ in 1985, he has since risen to become one of the best B-movie stars in Hollywood. With wonderful horror movies like ‘The Purge’ and ‘Sinister’ to his name, he also presents himself wonderfully in action thrillers such as the remake of John Carpenter’s classic ‘Assault On Precinct 13’ and the Oscar-winning Denzel Washington classic ‘Training Day’. And for lovers of sweet romance, he also has the beloved ‘Before’ trilogy, including ‘Before Sunrise’. And possibly most popular of his movies, the Robin Williams masterpiece ‘Dead Poet’s Society’, which has held on to a loyal fan base since its release in 1989. And while he doesn’t have the chance to give the same level of performance in ‘Getaway’ as we’re used to from him, he does his best, considering he spends most of the movie behind the wheel of a car, playing a former racing star-turned criminal. We can only expect so much of him. He gets the job done, with his usual coolness and stern look, that makes him such a great actor to watch.

Selena Gomez is honestly one of the prettiest and most talented people God has put on the Earth. Beautiful, smart and strong, Selena is one of the biggest stars to emerge in the 21st century. From her brilliant stint on ‘Barney And Friends’, she went on to major fame with Disney’s ‘Wizards Of Waverly Place’ and her music career, garnering many hit tunes around the world. While her movie career has been less successful (‘Spring Breakers’ is so awful that even Selena and co. in bikinis couldn’t save it, and made worse by the fact she disappears half way through), she still remains one of the most bankable stars in the world. ‘Getaway’ doesn’t push to her to any great acting extremes, but again, like Hawke, she gets the job done. And even in a dressed-down state, she’s still totally glamorous. I adore her.

Jon Voight stars as the villain of the movie. Jon. Voight. One of the world’s most successful and respected actors. With iconic movie classics like ‘Midnight Cowboy’, ‘The Champ’ and ‘Deliverance’ to his name, he has also starred in some of the greatest action movies ever made, including the legendary ‘Heat’, ‘Mission: Impossible’ (The first in the spectacular Tom Cruise franchise) and ‘Enemy Of The State’. He even had a major role in season 7 of the greatest show on television, ’24’. Again, he’s not pushed to any extent gin this movie, but his voice alone adds some great fun to the story, with his instantly recognisable rasp. Defnitely a real legend and great to see him yet again as another villain.

Bruce Payne. One of cinema’s most brilliant and entertaining villains in the Wesley Snipes action classic ‘Passenger 57’, Charles Rane. He hasn’t had quite the career he deserves, but even that one role has placed him in the hearts of every action movie fan in the world. Seeing him in ‘Getaway’, even only for a short time, brings goosebumps from the memories of “Charles Rane is not insane!”. Legend.

Every action movie fan has a deep love for a massive action score. And ‘Getaway’ has a score worthy of its countless action scenes. Justin Burnett is a man who has worked for many years with the incomparable Hans Zimmer. And much of that Zimmer magic has rubbed off on him. Although fronting very few movies has a lead composer, Burnett has that hunger for excitement that brings so much more to modern action cinema. With every chase, with every stunt, Burnett does his best Zimmer impression as he throws caution to the wind and goes all out on fast beats and countless instruments. Going back to one of those negative reviews where someone claimed the movie is “exhausting”, that beautiful exhuastion comes a lot from the score. The action, which I’ll get to soon, is glorious. But the music brings so much more excitement, taking on a Jason Bourne feel as it thumps along at breakneck speed. While not technically as brilliant and thematic as Zimmer or other action composers, the score here is spectacular and a joy to hear. Hollywood needs to give Justin Burnett more work. Now.

A 2012 Shelby Mustang GT500. Oh God. What a car. What. A. Car. Very much like Selena Gomez… Beautiful, strong and extremely talented. Think back to the awesome ‘Gone In Sixty Seconds’ from 2000, with Nicolas Cage in an older Shelby Mustang GT500. Such a fantastic action movie with a fantastic car. So naturally they had to go back to basics and give us a new action movie with a Shelby Mustang in the spotlight. ‘Getaway’ showcases this car as the must have power car, the muscle car that every man desires. Sleek, fast and looks magnifcient on film, this is simply one of the greatest cars ever made.

‘Getaway’ is far from original. The story has been done. The situation has been done. And Ethan Hawke, while a terrific movie star, is not Arnold Schwarzenegger or Jean-Claude Van Damme, or any of the other icons of action cinema. So what the movie must do is seriously deliver on its promise of action. And boy does it ever. That Shelby Mustang smashes its way through everything from Christmas markets to police cars. On and on, one spectacular chase after another, the action constantly ramps up a notch with every scene. And a lot of praise must go to director Courtney Solomon. While he doesn’t have much to challenge him in the way of drama, he handles the countless car battles with great passion. I personally have always loved when cars hurtle toward the screen in car chases. There’s nothing like thinking for one second that a car has just come through the screen and is about to hit you. And ‘Getaway’ does that contstantly. Throwing cars and people around the screen, Solomon does the job brilliantly. While the movie’s gimmick of showing the various chases through the car’s rigged cameras (The villain watches the characters’ every move through customised cameras) can be unsettling at times, as a whole, the action here is some of the greatest you will ever see. The stunt drivers on this movie are the very finest, including the legendary Steve Picerni (Check out his credits here and swoon!) who drives the lead car in place of Ethan Hawke. And yes, it’s all totally exhausting. Which, in an age of being cheated with so-called action movies that deliver almost nothing in the way of thrills, is exactly what we need. A 90-minute smash-fest which only slows down long enough to give us several close-ups of Selena Gomez. Matched with the music score, ‘Getaway’ is a perfect showcase for action cinema. And to top it all off… Three of the biggest and best producers in the action movie business – Joel Silver (The two biggest Christmas action classics ‘Die Hard’ and ‘Lethal Weapon’, along with ‘The Matrix’ and ‘Commando’), Mosh Diamant (Van Damme’s long-time producer, including the movies ‘Sudden Death’, ‘Timecop’ and ‘Maximum Risk’) and Julius R. Nasso (Producer for Steven Seagal on ‘Under Siege 2’, ‘Marked For Death’ and ‘Out For Justice’, plus many more) – all serve as producers on ‘Getaway’. Very impressive roster.

Action movies set at Christmas time are just the best. From ‘Lethal Weapon’ to ‘Die Hard’, festive violence is so much fun. And ‘Getaway’ embraces its Christmas time background, with much of the action surrounded in Christmas trees and bright lights, and the occasional Christmas song playing from somehwere ofscreen. It even ends with the immortal classic ‘Jingle Bell Rock’, which also played over ‘Lethal Weapon’s brilliant opening. For a list of brilliant Christmas action movies, check out this list created last year of the Top 10 Christmas Action Movies. Sadly, I’d only seen ‘Getaway’ for the first time this year, but consider it as being very high up on that list.

Be sure to get yourself a copy of ‘Getaway’ for your Christmas viewing. It’s a genuine must-see for action fans. My new number one favorite car movie.