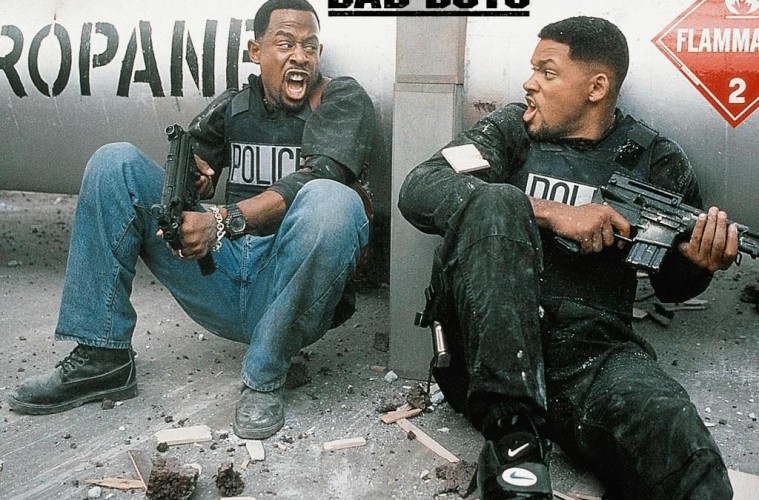 In honor of action movie juggernaut, Michael Bay, celebrating 20 years since his first movie, ‘Bad Boys’, hit cinema screens, and the great man turning 50 this year, it seems right that we mark the rise and career of such an iconic and hugely successful man in the genre of action film making. Over the next few weeks, the movie career of this Hollywood giant will be covered, with a review of each of his movies, including ‘Bad Boys’ (Of course), ‘Armageddon’, ‘Pearl Harbor’, the ‘Transformers’ series and my personal favorite action movie of all time, ‘The Rock’. And then hopefully next year, we will have a new Michael Bay blockbuster to flock to the cinema for… ’13 Hours – The Secret Soldiers Of Benghazi’, which is based on the true life events of the September 11 2012 terrorist attacks in Libya, which claimed several lives, including the U.S. Ambassador, J. Christopher Stephens. From what we’ve seen in the trailers, it’s sure to be up there with Bay’s best. Have a look at the stunning red band trailer…

In 1995, a young director named Michael Bay was handpicked by blockbuster-producing icons Jerry Bruckheimer and Don Simpson to take the helm on a project that had gone through several major changes including cast and directors. With the legendary funny man Dana Carvey and the hilarious Jon Lovitz cast as the two lead stars, the movie was originally titled ‘Bulletproof Hearts’. But upon the exit of Dana and Jon, the project was re-titled to ‘Bad Boys’, and after 80s legend Arsenio Hall turned down the role of Mike Lowry (Which he says he regretted after the movie came out), ‘Fresh Prince Of Bel-Air’ star Will Smith was then given the role, alongside another then big TV star, Martin Lawrence, would be playing Marcus Burnett. But while Will and Martin were well known TV stars and Bay well known for his non-movie work, ‘Bad Boys’ would be Michael Bay’s first time directing a motion picture, and both Will and Martin’s first major movie starring roles.

Known for his early work, on music videos for massive artists like Lionel Richie and Meat Loaf (Bay directed the epic video for ‘I’d Do Anything For Love (But I Won’t Do That)’) and his work with Playboy Entertainment (Including directing the 1990 Playboy Video Centerfold for the incomparable and very wonderful Kerri Kendall), Michael Bay’s next challenge was to prove his worth to Bruckheimer and Simpson, with their first movie for Columbia Sony Pictures. It was risky, but knowing how Bay worked and the style he had to offer, the producers had faith in him from the start. Taking on ‘Bad Boys’ was a challenge for the new film director, as he didn’t like the script (Insisting that both Will Smith and Martin Lawrence feel free to play out with improv on set), and he had a hard time working with Smith during certain scenes of the movie, including the “I love you, Marcus!” line in the finale, which Smith flat out refused to say, until he finally gave in and blurted it out during filming. He also had a very small budget, in Hollywood terms, with no more than $19 million to spend, which made his job a lot harder. It’s funny to think these days of Michael Bay with such a tiny budget for action sequences and special effects (One scene from a ‘Transformers’ movie would practically cost that now!), but yes, he’d very little to work with, and had to get things right the first time around, for there wouldn’t be a second. Like the incredible airfield hangar explosion in the finale… A rainy day, a building full of expensive explosives and his very own magnificent Porsche 911 Turbo (The greatest car of all-time!). But luck was on his side, through most of the production, and he finally got ‘Bad Boys’ onto the screen. For $19 million. Which then went on to make almost 8 times that around the world, making it a massive success for the studio and turning Michael Bay into a must-have director for Bruckheimer and Simpson.

‘Bad Boys’ focuses on two longtime cop friends, the wealthy and womanizing Mike Lowry (Will Smith) and the smart mouth family man Marcus Burnett (Martin Lawrence), who get tangled up in a dangerous assignment, when a $100 million haul of drugs is stolen from a police station lock-up by a ruthless French drug dealer (Tcheky Karyo) and his cohorts. When a friend of Lowry’s is murdered, the victim’s friend, Julie (Tea Leoni), contacts the police looking for Lowry, but ends up duped into believing that his complete opposite, Burnett, is the man she’s looking for. From then on, Lowry and Burnett must pretend to be each other, through an incredible chase around the streets of Miami, to keep the witness on their side and out of danger.

‘Bad Boys’, after 20 years, still stands as one of the greatest action movies ever made. Not just for the story, the cast, the producers etc… But for Michael Bay’s own love of an all-out action-packed thrill ride. Bay will never cheat a cinema-goer, you get bang for your buck, and plenty of it. And this movie was his first chance to show that off on a big screen. The man’s vision is perfect, his timing is unmatched and his style is second to done on the field of action cinema. He directs the hell out of every frame, he takes his time and perfects each shot, delivering a maximum blow to the viewer with every explosion and every bullet fired. And his skills as a director of cars is something to behold. The chases of ‘Bad Boys’, to this day, still outdo most chases you’ll see in a movie, timed perfectly and created with complete love and respect for both the cars and the stars. Never in a Michael Bay movie have we seen a chase that forgets the characters, both are always perfectly intertwined. For example: The final car chase. Emphasis on both the vehicles and the stars, delivering a thrilling sequence of action and speed, but all the while staying in touch with Mike, Marcus and Julie. Perfect. And the way he directs people, no one gives more focus to a movie’s stars in an action movie the way Bay does. From ‘Bad Boys’ to ‘Transformers’, the screen is shared equally between the spectacular action scenes and the characters taking part in those scenes. Anyone wanting a perfect example of how brilliantly Bay directs people, you need only hunt down a copy of Kerri Kendall’s Playboy Video Centerfold, it will literally take your breath away. A flawless spectacular Playboy legend being directed by Michael Bay is something you truly need to see in your lifetime.

But for a while, let’s look past Michael Bay and his rise to Godly greatness (Yes, I say Godly, and I mean Godly!) and look at the movie itself. Will Smith and Martin Lawrence have both never been better on screen. Will shines in ‘Independence Day’, ‘I, Robot’, ‘Men In Black’ etc…, but for me, both ‘Bad Boys’ movies show him at his very coolest and very best. He carries himself like a superstar, he delivers those lines with glee… “Now back up, put the gun down and give me a pack of Tropical Fruit Bubblicious!”. And Martin Lawrence, while he’s done a lot of great movies (‘Blue Streak’, ‘National Security’, ‘Big Momma’s House’, ‘Life’ etc…), has never had a better role than Marcus, he’s hysterical in almost every scene he has in these movies, I couldn’t love him more. As for Tea Leoni, we go back to Kerri Kendall… There are people who complain about the way Bay directs women, some cry sexism, some just cry for the sake of it. But I am one of those people who watches an action movie and wants it all. Fast cars, cool guns, big explosions, epic soundtrack and extremely sexy women. Michael Bay gives me all of that. And, he does with Tea Leoni this time around. Julie is a brilliant character – Fun, sassy, tough and sexy. She easily holds up against the boys, and delivers a lot of the movie’s great quips (The “Did you go to college” gag gets me in stitches every time!). And her costume is just stunning. She’s the perfect woman for an action movie on such a high level as ‘Bad Boys’.

The action scenes and the music score are two things that, aside from Michael Bay and the cast, really bring ‘Bad Boys’ to life. I have a question for fellow action movie fans… Can you name an action that came before ‘Bad Boys’ which had perfectly synchronized score with its action scenes?… This movie is the first I remember that had its score cues timed perfectly with scene changes, stunts and chases. The now iconic sequence of Will Smith in pursuit of the criminals and Martin Lawrence atop a taxi cab, still stands for me as the best marriage of direction and music in any action movie scene I can think of (Although there is a hilariously low budget car smash that shows just how little money Bay had at the time of filming, and how his following success is mirrored in ‘Bad Boys II’). Mark Mancina, the music master behind several wonderful 90’s action movies, such as ‘Speed’, ‘Speed 2’, ‘Con Air’, ‘Money Train’ and ‘Twister’, shows off his talents here, giving his best work. The score is spectacular, from start to finish, the opening credits scene with Mancina’s music and the beautiful shots of night time Miami still gives me goosebumps, a wonderful setup, I wore that scene off the first videotape I had of the movie. The music pumping through the action scenes adds a whole layer of excitement to everything, and like I mentioned, always seems perfectly timed (Check out the taxi shots especially!). One of the best movie scores ever recorded. The action itself is unbelievable, from the claustrophobic police station robbery, all the way through Julie’s hotel escape, the ice cream truck and taxi chases, right through to the spectacular finale. ‘Bad Boys’ delivers thrills that have rarely been rivaled, and shows Michael Bay at his very best, proving why he really is the king of action cinema, despite what many people think. Will, Martin and Tea are all wonderful in their roles, and the supporting cast also deliver the goods. Tcheky Karyo is fantastic, for me he’s up there with the most memorable movie villains. And Joe Pantoliano also turns in a hilarious performance as the police captain, who does his best to control the crazy situation his cops are in. Everyone just delivers the goods and make a fantastic movie just completely perfect.

For 20 years old, ‘Bad Boys’ hasn’t aged a day. It’s still the bombastic, joyful and hilarious action-packed thrill ride it started out as. And despite its then low budget, it still remains up there with the greatest action movies ever made. At least in my opinion. Anyone who hasn’t seen it, it’s a must. And if you want an earlier taste of Bay’s genius, take a look at Meat Loaf’s ‘I’d Do Anything For Love’ video ( and especially Kerri Kendall’s Playboy special, I’m not kidding, it’s incredible!). What a career you’re having Mr. Bay, I salute you!

Check back with us soon for an even longer review on the next movie of our Michael Bay list… ‘The Rock’.