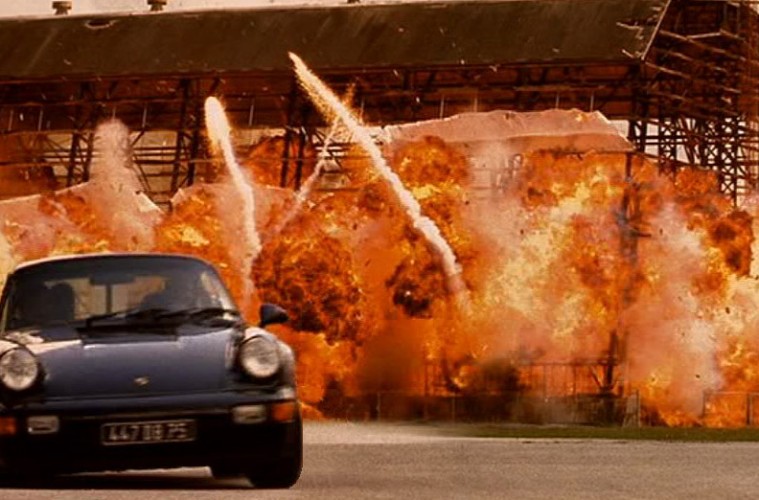 Is there anything finer than a spectacular car chase in an action movie? The classic cars, the revving engines, the heroes saving the day… You just can’t beat a good old car chase. So in tribute to the greatest legacy in action movies, we want to present you with the very finest of those car carnage spectacles, the most exciting and out of control street wars that could be gathered. As there are so many incredible chases in movies down through the years, it has almost become impossible to select even a top 10 from a selection like this (Although I have tried, to no avail!). There are even more that clips from just could not be found online, so sadly have been excluded from this selection (A special mention must go to the wonderful car chase from Arnold Schwarzenegger’s classic ‘Commando’. Thank you, the late great James Horner, for that amazing score also!). So without order (The numbers are to keep count, not to signify preference, until we get to the best of all, the big number 1!), without rules and without further delay, here are the first 25 scenes from the 50 greatest movie car chases of all time.

To kick start the list, a truly spectacular and epic chase from a movie I haven’t seen since I was a kid. In my opinion, the greatest of the classic car chases, a showcase of pure driving genius and thrills unmatched by any other chase of its time. Roy Scheider was awesome in this movie.

I remember seeing this at the cinema and thinking “Holy Jesus, a Dragster! This is heaven!”. One of my favorite scenes from the ‘Fast And Furious’ franchise. Who doesn’t love a Dragster?

The first of several James Bond car chases in the list. This one stands out as the very finest car chase of the classic Bond movies. The legendary Sir. Roger Moore (I love Roger!) starring in his second 007 action blockbuster, ‘The Man With The Golden Gun’ is everything that’s wonderful about the James Bond movies, and this chase is one of my highlights from the franchise. Fantastic scene.

A short but stunning car chase from one of my favorite Van Damme movies. Only Van Damme could make a crappy car like this look so cool. Check out those tight corners, incredible driving.

I don’t think there was a kid in the 1980’s who didn’t want Cobra’s car. Stallone in top gear for his 80’s action classic ‘Cobra’, one of the great chases in 80’s action cinema. Gorgeous car.

As if I would ever do a car chases piece and not include every single one that Michael Bay directed. As the master of action, Bay pulls out all the stops for his 4th ‘Transformers’ outing, with mind blowing action scenes like this. The whole movie is magnificent, but this chase stands out in my mind, as it’s one of the few scenes in the franchise that focuses on human action over Transformer action.

The Bourne movies are known for their highly-charged chase scenes, and while this is not my favorite one, it is a stunning piece of film making, with a wonderful tune over it (Paul Oakenfold’s ‘Ready, Steady, Go!’).

One of the most iconic car chases in cinema history. Thelma and Louise come to the end of a long chase, as they evade the police one last time, atop the Grand Canyon. Everyone loves this scene, it’s magic.

One of a few ‘Mission: Impossible’ chases coming up, this one is really spectacular. Sadly, only a short clip is available, but the entire scene and the continuing motorbike chase is one of the most dangerous and exciting scenes in the awesome Tom Cruise franchise.

The first of two fantastic car chase scenes from ‘The Blues Brothers’ movie. Legendary is not a big enough word. This scene especially is one I love, I’m mad for a piece of ‘Can’t Turn You Lose’.

‘The Dark Knight’ is a very hard movie to beat, extremely hard, almost impossible. And with explosive action like this, and a performance of such high quality from Heath Ledger as Joker, it’s easy to see why. The whole sequence is spectacular, this is just half of it. Christopher Nolan’s masterpiece.

Many people don’t like this movie, either as a remake of the original or just a stand alone movie. I completely disagree. While I enjoy the original, I have no difficulty in saying this one is in every way superior. Bigger action, better villain (Sean Bean is super cool and a total bad ass!), and Michael Bay as producer. ‘The Hitcher’ also has a killer soundtrack, as you’ll know from the clip. My favorite scene from the movie.

The first movie from Dreamworks, ‘The Peacemaker’ has largely been overlooked, despite i starring two of the biggest stars in the world, George Clooney and Nicole Kidman. But I’ve adored it since it was released. One of the greatest action movies ever made, and my favorite movie of either star’s. Brilliantly directed, with a terrific story and heart pounding action scenes like this fantastic car chase, ‘The Peacemaker’ is a sadly forgotten gem, begging and deserving to be loved by so many more people.

Michael Bay’s first action spectacular ‘Bad Boys’ is riddled with one giant chase scene after the other, all leading to this death-defying finale, featuring the world’s most awesome car – The Porsche 911 Turbo. Short, but absolutely wonderful. There will be more ‘Bad Boys’ featuring very soon.

Possibly the most horribly underrated action movie ever made, ‘A Good Day To Die Hard’ features one of the best chases I’ve ever seen, as John McClane hurtles through Moscow to rescue his son. The movie may not be perfect, but dang, with action like this, who really cares? Bring me ‘Die Hard 6’!

Before we go further, I know that the chases of Pierce Brosnan’s Bond movies relied heavily on gadgets and special effects. They may not have the classic reliance on the cars themselves like Sir. Roger’s movies, or Connery’s, but they’re so wonderful to watch. And this is one of the best of the series, as is the movie one of the best in the Bond series. I’ve wanted a remote-controlled BMW with rockets ever since I first saw this movie.

One word is needed… Wow.

Perhaps more of  a truck chase than a car chase. But perhaps it still counts. Watching scenes like this reminds me how much the musical score can have an effect on the overall action. This is genius stuff from Brad Fidel and James Cameron. One of ‘T2”s best scenes,

I must admit, I’m not a big fan of this movie. But the driving scenes are some of the best we’ll ever see in movies. This scene is by far the best from the first movie of the series. I’m personally a huge fan of ‘Transporter 2’, it’s the complete opposite of the first, such a stunning action movie. But this chase is terrific.

As someone who never really thought much of the original ‘Mad Max’ trilogy, I wasn’t sure what to expect from Fury Road. But wow. The action. All of it. The chases, the explosions, the absolute lunatics doing the most random things in vehicles. While I don’t agree with many who claim it’s utterly perfect, I do absolutely love it, and I’m delighted to see it nominated so much at this year’s Oscars. The first time a ‘Mad Max’ movie has rocked my world. And this opening chase scene rocked me most.

The one time that a spin off of sorts has happened in the ‘Fast And Furious’ franchise, this movie tends to divide fans of the other movies. I have nothing but love for it, and think it fits perfectly into the ‘Fast And Furious’ family. It’s silly, it’s over the top, but the chases and races are some of the best in the franchise. And the score here by Brian Tyler is the best of them all. Listen to the theme over this awesome climactic chase. Wonderful. (This clip also includes an addition from ‘Fast And Furious 6’)

While I always love a massive Michael Bay-style smash em’ up car chase, I always have a lot of love for these smaller crazy chases. Intimate, realistic, and extremely fast. ‘Vantage Point’ is another forgotten movie that I love a great deal, it’s totally my kind of movie. And this finale chase is my main highlight from it.

I still remember when I was a kid, seeing this for the first time on TV. It blew me away. The action, the comedy, the music and Eddie Murphy’s fast mouth. Up there with the greatest movies of the 80’s. I don’t know even now how they got this chase done, but I’m glad they did, it’s one of the very best.

To wrap up this first part of the 50 greatest movie car chases, something spectacular is needed. And here’s one so spectacular, even Michael Bay is sitting somewhere wishing he’d directed it. While ‘The Matrix’ is largely celebrated as one of the greatest action movies ever made, the sequels have long been slammed and cast aside. But for me, I have a lot of love for the first movie, but these sequels are just so much more wonderful. They’re flawed, they’re stupid, they’re overly long, but God damn, the action scenes are some of the most incredible ever filmed. And this chase from ‘The Matrix Reloaded’ will long stand as a masterclass is action film making. Watching it just now gave me goosebumps again.

That’s all for now, folks. Check back soon for the second half of our look at the 50 Greatest Movie Car Chases, I’ve saved some really spectacular stuff for that. If you have any personal favorites, let us know.