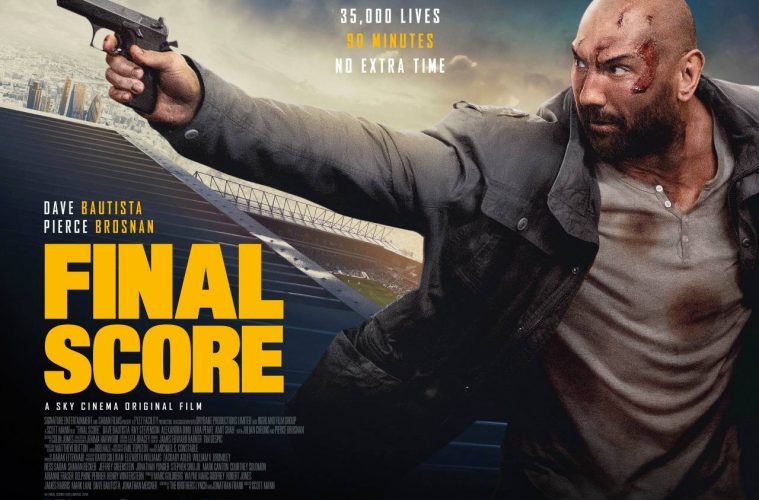 The end result was a recording fundamentally the same as the original, but one substantially inferior in quality.

I was reminded of all this whilst watching Final Score (2018) – a sort of Z-generation facsimile of the Bruce Willis classic.

Excitedly marketed as ‘Die Hard in a football stadium’, the story sees a former soldier (Dave Bautista) arrive in London to take his niece to her favourite team’s big match.

But in the finest traditions of wrong guy in the wrong place at the wrong time, their path crosses with a Russian militant – and his gang of heavily muscled and tattooed terrorists – who has taken control of the stadium so he can hunt down his brother.

What follows is the usual fly-in-the-ointment, monkey-in-the-wrench shenanigans as our unexpected hero is pitted against the Russkie foe.

Now, there’s nothing fundamentally wrong with this set-up. After all, it’s uncannily similar to Jean Claude Van Damme’s thoroughly enjoyable ‘Die Hard in a stadium’ effort Sudden Death. Unfortunately, this effort is so lacklustre it may make you think fondly of A Good Day To Die Hard.

Bautista is fine as the accidental hero thrust into the middle of an emergency. But many of the roles are taken by actors who’d disgrace a daytime soap opera. Particularly egregious is Amit Shah who, in a catastrophically misjudged comic turn, plays Bautista’s sidekick Faisal.

The casting is compounded by a dreadful script (much of the story-telling is done by the Exposition News Network which conveniently runs on TVs throughout the film). And even seasoned Hollywood pros like Pierce Brosnan cannot escape its deadly choke hold.

In what could be a Razzie winning supporting turn, the one-time 007 (attempting an abysmal Russian accent and a beard so bushy it suggests he doesn’t want to be seen in the film) has to recount a supposedly moving story about Clara – his beloved childhood chicken. Better actors than Brosnan would fail to sell the dire dialogue, and it’s no surprise that he lays an egg.

Worse still, is that director Scott Mann cannot make the football stadium location work. Filmed at Upton Park – prior to its demolition – much of the action feels like it is taking place in a deserted building about to be knocked down than on the day of a big match.

Mann was obviously working with a limited budget, but he managed to provide a superior gloss to the similarly small-scale – and actually rather good – crime flick Heist (2015). Hampered by either time, money or his own imagination, Mann is unable to create a convincing atmosphere.

All of this makes Final Score a disappointing 90 minutes. Rather like watching a drab nil nil draw.

Final Score is available in cinemas and Sky Movies now.