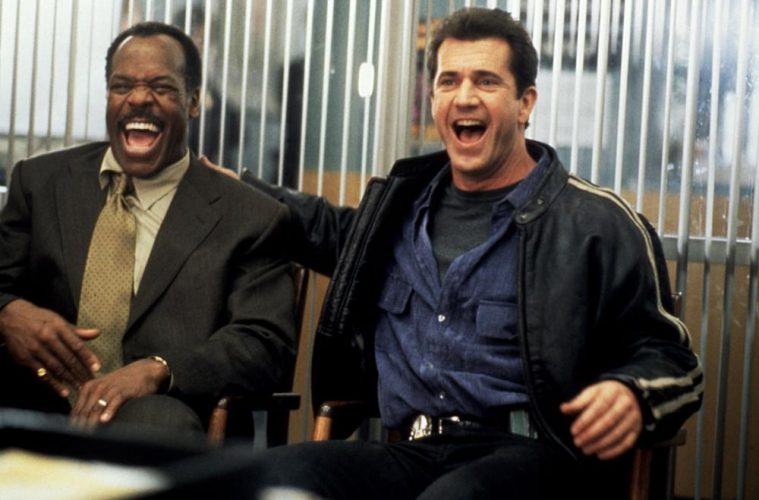 To look back at the greatest action movies of 1998, a year filled with incredible blockbusters, but a lack of anything from several major action stars (As was the case with our look back at 1997), has been difficult. A year without a Schwarzenegger movie is sad. But 1998 served up some of the most awesome action I’ve personally ever seen. And to kick off this series of retrospects, I’ve gone to an iconic name in action movie history… Lethal Weapon!

In 1987, an action movie classic was born when Shane Black’s story of a rage-fuellled suicidal cop and his unfortunate play-it-safe family man partner hit big with audiences worldwide. Starring Mel Gibson as Martin Riggs, the suicidal cop, and Danny Glover as Roger Murtaugh, the family man, ‘Lethal Weapon’ threw the pair into a desperate fight against drug-running military veterns. With more action and gags than anyone could imagine, and stellar performances from the leads (Gibson is especially fantastic!), the movie became a major success at the box office and lead to a resurgence of the buddy cop movie genre. So naturally sequels were a given. After all, a studio is there to make money, so why shouldn’t there be sequels to a popular product?

With ‘Lethal Weapon 2’ and ‘Lethal Weapon 3’ packing in the crowds, and the second movie becoming almost just as loved as the original, director Richard Donner and his stars would surely come back for one more movie. Despite people believing that the third movie watered down the voilence and malice of the first two movies, I never agreed with that. Sure, Riggs has become a little more balanced, lost his suicidal thoughts and found a new love in his life, but that’s the nature of sequels, a little growth. Riggs is still insane, still a wild force of action and stil haunted by the murder of his beloved wife. And that carried over into the fourth movie.

Riggs and Murtaugh are caught up in a money counterfeit scheme, when it emerges that Murtaugh has been hiding an Asian family illegally in his home. When the father of the family is murdered, Murtaugh is determined to bring the killers to justice, tracking down the men behind the fake cash and the death of his friend. With Murtaugh and Riggs on the case, things get more lethal than ever, as their own loved ones soon become targets of the criminals, leading them into the craziest chase of their lives.

While I’m a huge fan of the Lethal Weapon series, my personal taste has always saw me love the series in reverse, with the order of 4,3,2,1. The reason for that comes down to a great love for not just the two main characters, but for the supporting characters that were added, beginning with Leo Getz (Joe Pesci) in ‘Lethal Weapon 2′. Bringing in the brilliant Rene Russo as Riggs’ new love, Lorna Cole, for the third and fourth movie was also a great leap forward. You can’t have a man lost and alone for four movies, constantly trying to take his own life, that wouldn’t work. Many people have forgotten the point of the original movie… To heal Riggs and to make Murtaugh a little less conventional. The rest of the movies simply build on that friendship. Having both Russo and Pesci back makes the fourth movie a must. But the addition of the wonderful Chris Rock in his best movie role, just propelled the movie to insane heights of fun. Anyone who didn’t laugh to the point of crying during that phone call scene between Rock and Pesci has something wrong with them. And the laughs don’t stop there. Although now considered un-PC (What boring times we live in!), the scene at the dentist with gas-induced laughter is hysterical, as are the many racial insults Riggs throws around throughout the movie with the Asian cast. And at the top of that Asian cast is the small but mighty Jet Li as the movie’s lead villain. Brutal, silent and extremely violent, Li made a name for himself in America during the late 90’s, and there’s no doubt this huge hit proved more than helpful. We’re used to Jet Li the hero, so to get Jet Li the villain is beyond awesome. And he more than matches up to the movies characters, despite what others tell you. He’s a terrific bad guy. The whole cast here is a joy.

With Lethal Weapon, while characters are extremely important to the series, so is the action. And dang, ‘Lethal Weapon 4’ offers up some of the greatest action I’ve ever seen. Countless chases, stunning fight scenes and more explosions than almost anything Hollywood puts out now. But the two biggest scenes are the firepowered opening scene with Riggs and Murtaugh trying to take down an heavily armoured killer who torches the city with a massive flamethrower. Complete with Riggs is his heart-covered boer shorts. And my highlight of the whole movie, and favourite action scene of the franchise (With the pick-up truck chase from the third movie coming up right behind), the stunning car chase that sees Riggs ride a coffee table along a freeway, and then has our heroes drives their car through an office building and straight out a window. A magnificent action scene, that alone is enough reason for me to value this movie as high as I do. The action of ‘Lethal Weapon 4’ is pure class, exactly the escapism I look for in an action movie. And thanks to a brilliant supporting cast, the addition of Chris Rock and Jet Li, and a terrific story, ‘Lethal Weapon 4’ delivers more bang for buck than ever before. Easily one of the greatest action movies ever made.

While we wait (and wait) for ‘Lethal Weapon 5’, I hope everyone is enjoying the new TV show as much as I am. Watch out for a piece on that later.