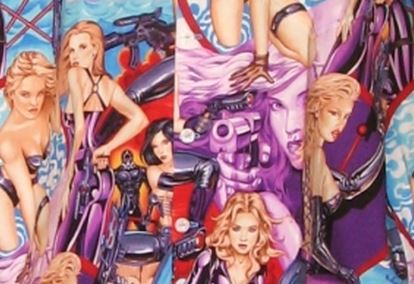 Hey,Verge! Your Troll Is Showing: How #SHIRTGATE Has Brought Out The Worst The Internet Has To Offer (Editorial)

In the last few days, a significant scientific achievement was accomplished. Specifically, the ESA (Europes NASA) launched a craft into space tasked with firing a probe named Philae onto a comet. The purpose was to collect precious data that could tell us about the origins of our own solar system and perhaps even life itself. It’s been a decade since the initial launch and the odds of this working were not good.

To put this project in perspective, imagine throwing a football at a jet plane and then having that football shoot a golf ball onto the plane. Well, they threw said football into the sky and hit their target on the first try.

Now, the mission is in jeopardy for a whole bunch of reasons. But none of that matters according to Chris Plante over at TheVerge.com (a website I typically hold in high regard). In Chris’ piece titled “I don’t care if you landed a spacecraft on a comet, your shirt is sexist and ostracizing” he waves his “misogyny wand” and begins to unleash all of his self-righteous rage on Dr. Matt Taylor, a genius with a PHD in Space Plasma Physics (I don’t even know what that means) who, along with his colleagues, is trying to fight against incredible odds and save a mission a decade in the making.

And what, pray tell, was Dr. Taylor’s sin? What object has the power to set off a Twitter firestorm and raise the ire of Chris Plante, misogynist hunter in chief over at the The Verge. According to him it was wearing “a bowling shirt covered in scantly clad caricatures of sexy women in provocative poses” during interviews.

Much like Alice falling into Wonderland, Plante goes even deeper to justify his oh so delicious outrage. He questions what could have been going through Dr. Taylor’s mind to make him choose such a terrible shirt — as if even considering such a thing would render anyone, not just Dr. Taylor, devoid of intelligence. It isn’t until later in the article that Chris reveals that it was a woman who made it for Dr.Taylor.

Who is this an talented designer? She goes by the Twitter handle Elly PriZeMan, and her reaction is key to this conversation.

@DanielVavra I’m not sorry for having a hobby and making a one off. Just feel bad it’s got so much negative attention. Matt is awesome!

When faced with such inconvenient things like facts, Plante wipes all of this away with the phrase “But none of that actually matters.” He then makes the point that “no one at ESA saw fit to stop him from representing the Space community with clothing that demeans 50 percent of the world’s population.” I mean…I just can’t fathom all of the stupidity happening within this statement. One of those demeaned “50 percent” made the shirt and is glad she made it and won’t apologize for it. But because he is in the “right” here he can just ignore her…because her opinion doesn’t matter in the grand scheme of things, right?

Besides the blatant disregard for the reality of the situation when did the “Space community” involve so many individuals? Last I checked, most everyone I know has their feet firmly planted on the ground and, as we speak, only 3 people are floating around this planet. None of which have released an official statement on the offending shirt. Hell, they may even like it as much as I do. Regardless, take heart, “Space community. “Chris Plante is here to save you from Dr. Taylor’s Rock and Roll fashion sense.

Not stopping there, the longest paragraph in the piece is the most damning. It begins with “This is the sort of casual misogyny that stops women from entering certain scientific fields.” Let me stop you right there. According to Merriam Webster misogyny is “a hatred of women”. Now, I’m no misogyny scholar but I know if I hate something I don’t cover my torso in that thing. Like, if I hate spiders, I don’t buy spider shirts. That’s not how hate works. Chris obviously thinks otherwise and then links this shirt to every possible scenario that could involve a woman feeling “not welcome.” The shirt was not directly involved in any harassment cases and is not a “smoking gun” in any ongoing investigation. But Plante feels perfectly at ease shoving these trumped up charges on this innocent piece of apparel.

No no women are toooootally welcome in our community, just ask the dude in this shirt. https://t.co/r88QRzsqAm pic.twitter.com/XmhHKrNaq5

He then quote’s Rose Eveleth of the Atlantic who makes a joke about the shirt being intimidating to women. I’m not sure if she knew it was made by a woman…but yeah, a woman made this shirt.

Finally, he gives this shout out: “Update: The amazingly talented Arielle Duhaime-Ross added some powerful thoughts to this piece that I wish I’d included when it was originally published.” Translation: Someone who is a woman, and therefore capable of wielding misogyny powers far greater than my own, contributed to this piece and it is now infallible.

And that is it. Cue fire and brimstone in the always entertaining Verge comments section.

Of course #shirtgate is just a minor symptom of a much larger problem, and these “issues” will continue to flare up.  People are going to continue making mountains out of mole hills and connecting something to all manner of terrible things in the world in seemingly every way possible. Even if people just like Dr. Tayor “meant it to be or not.” But I don’t have to agree with them or not like this fantastic shirt.

Rosetta is a grand achievement that shows PEOPLE working together to make it a true success despite the adversity ahead. It’s just a shame that we are stumbling over pebbles when we have mountains to climb.

UPDATE 11/14/2014 12:10PM EST:  Well, looks like the article has been updated again, this time with a tearful apology from Dr. Taylor to the people he’s offended. I stand by the points I have made in this editorial and respect the decision that Dr. Taylor has made in addressing this issue and wish him and his entire team the best of luck.