Disclaimer: The following piece is one of humorous analysis. So if anyone gets offended by this, “GOOD! Pick up the phone & start dialin’!“. 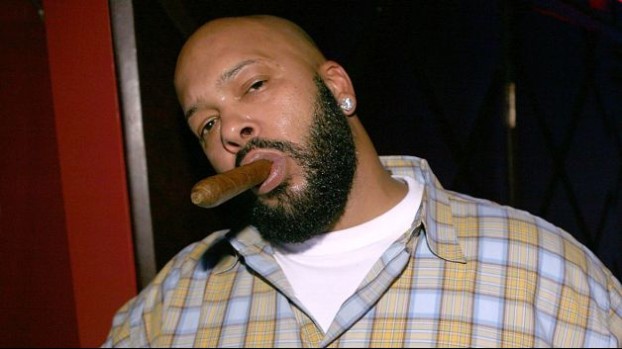 Marion “Suge” Knight is a polarizing figure. Like anyone, one simple label cannot encapsulate him: Record label CEO, L.A. Bloods-affiliate, extortionist are all negative tags used by the media to slap a convenient definition on Mr. Knight. But, I wouldn’t mind the media. They’re just biased, fault-finding, and (more importantly) right. Slam him with any label you’d like, but all of them fall under one umbrella label: “Gangsta”.

But as much as society glorifies the term, it doesn’t equate to being smart. No, the two are almost always mutually exclusive. But combine ’em and you’ve got a lethal combination than can go in either direction. President Obama has it. Steve Jobs had it. Richard Sherman has it. Suge Knight has exhibited strokes of both, but only sporadically. And even then, those instances are marred by whatever his current legal troubles may be.

Recently, he was arrested for involvement in a hit-and-run. Apparently, he had an argument with two men on the set of the upcoming film Straight Outta Compton and then tracked them in his red pick-up truck. He found them at a burger stand parking lot, and ran over them. Not once, but twice. One lived, but the other (deceased) was a childhood friend of his. In light of this, I believe Knight’s exploits have been influenced by the characterization of criminals in fictional mediums. In this case, it’s Michael Corleone from The Godfather series. The irony of this? These are mostly White fictional crime figures. 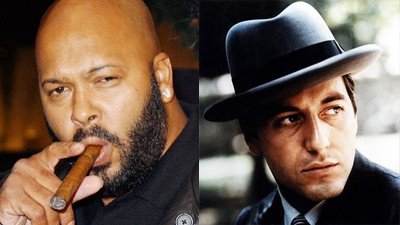 1.) For the aforementioned connection, Suge mimics Michael’s cold ruthlessness. He demonstrates this by killing his childhood friend. Michael had his own brother killed for betraying him to his enemy. If you’re trying to send a message to your enemies that you’ll count anyone (even friends and blood relatives) who betrays you as enemies, then keep watching mob flicks. That’s where that kind of cold, emotional detachment is a way of life and where getting away with murder unscathed is possible. Suge may not be afraid to get his hands dirty, but he gets caught red-handed with blood on his hands, pun intended, damn near every time. 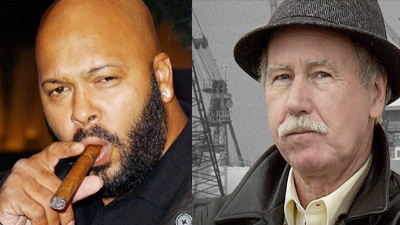 2.) The Greek from “The Wire” was capitalism personified and the most powerful criminal depicted in the whole series. His manipulations kept illicit activities up and running in Baltimore and removed powerful figures from the chess board. Him giving tacit permission to Marlo Stanfield to have his primary Baltimore drug distributor, Proposition Joe, killed was a way to get Marlo out of the game if you think about it.  Suge administered similar manipulations, but didn’t hide in plain sight. He was the mastermind behind the mid-90’s “east vs. west war”. He launched the opening salvo at the Source Awards that led to the eventual deaths of 2Pac and the Notorious B.I.G. Taking out the two biggest stars in music left a vacuum that he probably thought he could fill. But he just didn’t count on the fallout when one of his major artists, Dr. Dre, left Death Row. Dre went on to become bigger and now he’s a billionaire. Come on, Sugar Bear, were you thinking about the big picture at all? 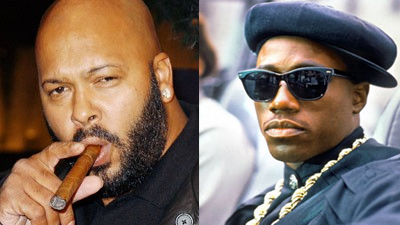 3.) Nino Brown from “New Jack City“. Through a combination of size, bodyguards and a plethora of intimidation tactics, Suge successfully extorted pop-rapper Vanilla Ice for the royalty rights to his mega-hit “Ice Ice Baby”. He or his bodyguards held Ice by his ankles over a hotel balcony, threatening to drop him if he didn’t give up the goods. Knight’s impetus for this was because one of the artists on his artists management label wrote parts of “Ice Ice Baby” and never got paid for it. Again, an example of not thinking. He should’ve dropped Ice. He wouldn’t have gotten away with it, but I doubt the world would’ve missed Vanilla Ice. Plus, it would’ve prevented the near decade-long setback Ice caused for White rappers until the advent of Eminem. 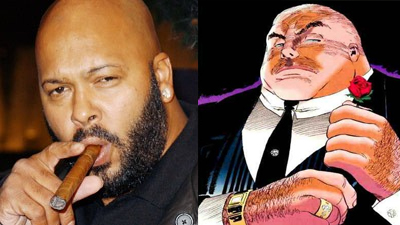 4.) Wilson Fisk, the Kingpin of Crime. A long standing Marvel Comics villain,  Fisk poses to the public as a respectable and wealthy merchant with several lucrative businesses. But in reality, he’s an underworld figure that most dare not cross. His reach is so vast that he can ruin the lives of the costumed vigilantes who oppose him….namely Daredevil, Spider-Man and the Punisher. Knight’s got the size, the bald head, penchant for cigars and the fear factor, but that’s about it.

Suge Knight epitomizes “life imitating art imitating life”. Where will his criminal genius take him next? I have no idea, but it’ll provide plenty of fodder for the folks in my arena.