Of all of the films announced as part of Marvel’s Phase 3, Inhumans is the one I’m worried about the most. Though Marvel Studios has a proven track record of success and most likely will turn these characters into household names (as they did this summer with the D-list characters from Guardians of the Galaxy), the concept and the ideas behind them (as portrayed in the comics) gives me cause for concern. More than that, I don’t believe an audience will be able to identify with these characters on film based on the sheer ridiculousness of their relationships, powers, and their isolated society. The concept is slowly being introduced now in Agents of S.H.I.E.L.D. via the blue-skinned Kree alien that was recently portrayed, but I’m still a tad cynical. I have five ideas for why I think Inhumans will be too much for its audience. But first, here’s a brief run-down: 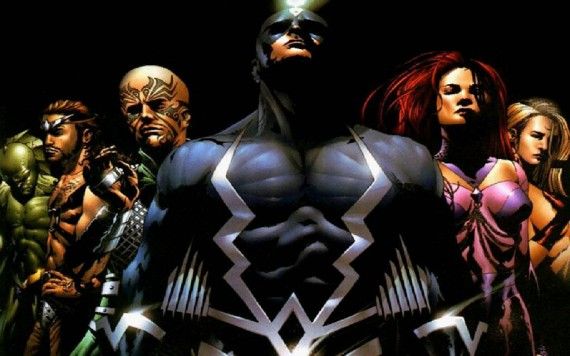 One million years ago, a group of armor-clad, 2000-foot-tall extraterrestrial beings called the Celestials came to Earth to experiment on the planet’s highest lifeform: The nascent human beings. Testing the versatility and adaptability of the human gene resulted in two sub-species of humanity: The Eternals, near-immortal/indestructible humans powered by cosmic energy which they can manipulate in a variety of ways; and the Deviants, who possess an instability in their genetic code that results in monstrous beings born in each generation. For the rest of humanity, the Celestials empowered them with a more generalized genetic potential for mutation which arises in various ways. In some cases, it arises as a spontaneous benevolent mutation in which a certain type of gene appears (such as the x-gene for mutants). In other cases, individuals have no X-gene but are particularly susceptible to outside forms of mutation, becoming superhuman after exposure to radiation, chemical agents, and so on (i.e.: Spider-Man, the Hulk, the Fantastic Four, et. al.). Mind you, the Celestials didn’t install particular genes in humanity that cause mutations. Rather, they redesigned the inherent genetic structure of humanity to be more prone to evolution and mutation through a wide variety of triggers.

Twenty-five thousand years ago, the militaristic alien race known as the Kree discovered a group of Eternals on one of their outposts set up on the planet Uranus. After vivisecting some of them, they determined that these beings came from Earth, the Kree travelled there and began their own experiments on a handful of humans. Their goal was to modify the evolution of these beings to make them super-powered soldiers in the army. Though experiment was a success, the Kree abandoned it entirely and left Earth, leaving their subjects to fend for themselves. The subjects, now calling themselves the Inhumans, formed a city named Attilan. Within it, they formed their  own royal society separate from humanity. They speak their own language, Tilan. Though many also speak English, Russian and Chinese. Inhuman society also requires its children to study English. Inhumans have a longer lifespan than humans and all have a stronger-than-athlete physiology. They learned to unlock their Kree enhancements to their DNA through exposure to the Terrigen Mist (a gaseous substance capable of awakening latent genes that code for superhuman attributes).  The Inhuman Royal Family (above) have all been exposed to the Terrigen Mist and each have their own special abilities on top of their birthright as Inhumans:

Some of the Royal Family have been members of the Avengers and are allies of humanity. But given the source material, here are the reasons for my skepticism:

1.) The Inhumans are a royal society of super-powered gypsies.

To an extent, Inhuman society is a caste system consisting of classes of royalty, warriors, artists, teachers, civil servants and healers. They also have artificially-engineered slaves called Alpha Primitives. I describe them as gypsies because of how the entire society will pack-up at a moment’s notice and seek refuge elsewhere once the current one becomes threatened or uninhabitable. Attilan has had three different locations: An island in the Atlantic Ocean, the Himalayas and the Blue Area of the Moon. On film, there could be multiple settings for Attilan.

Despite having a genetically-superior physiology to humans that’s further enhanced after obligatory exposure to the Terrigen Mist, Inhumans possess the immune systems of AIDS patients when exposed to anything outside of Attilan’s hermetically-sealed environment. They take one breath of Earth’s atmosphere, they could potentially die from inhaling a particle of smog. On film, you know what this means? That these characters may spend more time on screen dying than anything else. Yeah, Inhumans is an apt title, alright. Two-hour long snuff films are inhuman as is.

Several, if not all, of the Inhumans are products of in-breeding. The Inhuman Genetics Council (a 12-member body of internally-chosen Inhumans acting as Attilan’s governing body) prescribes marriages based on the probable offspring’s genetic potential. Those with the best genes are awarded superior positions in society. Even for enhanced humans, there’s still a chance of having defective offspring via incest (which probably explains the weakened immune systems). But these super-powered West Virginians have no apparent issue with that. Black Bolt and Medusa, king and queen of the Inhumans, are actually first cousins who’ve been betrothed since birth. They both have a son together named Ahura. That makes me curious about how Black Bolt is able to physically consummate his marriage. His power is to manipulate electrons and gains an enormous array of powers from that. All of his powers can be channeled silently through his body or the fork on his brow. However, the energy flow in his body is connected to his brain’s speech center, causing his power to erupt through his voice uncontrollably whenever he speaks. He can’t speak without triggering his powers. If he got his cousin pregnant the old-fashioned way, he should’ve obliterated her with his voice when he climaxed. If Marvel Studios chooses to address the incest of these characters, it’s actually a plus. It’ll be one step further for Disney to be more lax in allowing MS to portray more darker/adult-themed characters.

Because X-Men and all related terms have been sold to 20th Century Fox, Marvel Studios can’t even utilize the word “mutant” on-screen (unless they buy back the rights from Fox). Mutant characters set to appear in the Avengers sequel like Quicksilver and the Scarlet Witch have been called “miracles”. Right now, Inhumans are the closest thing that MS has to mutants in terms of species and concept. Mutants are humans born with genes that grant them powers that typically manifest during puberty. They’re also hated by humanity for being born different. Inhumans have faced that same blind prejudice as well, they also treat exposure to the Terrigen Mist (Terrigenesis) as a rite of passage for young Inhumans, to be performed at a certain age. In the comics, mutants and Inhumans also have their own species classification/taxonomical designations: Homo sapiens superior and Homo sapiens inanthropo, respectively. But because they have an isolated society, relating to them may leave viewers polarized.

5.) They have a giant teleporting dog.

Lockjaw is an intelligent four-legged creature who can teleport through time and space. He speaks with extreme difficulty and his origin is just as muddled. At first, Lockjaw was stated to be an Inhuman transformed into a giant dog after undergoing Terrigenesis. Later, he was retconned to be a canine that was transformed by the Terrigen Mist. Currently, the writers still can’t make heads or tails about his origin.

You people know nothing about Earth culture, and yet you have a massive seeing-eye dog. Hmm….