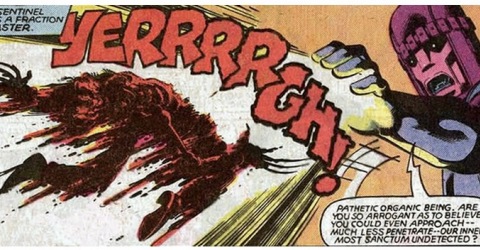 SHACK HOUSE: Countdown to X-Men Days of Future Past

Hi folks. For the next few weeks, the SHACK HOUSE will be providing summaries of the alternate future timelines depicted in the X-Men universe. My reason for doing this is actually three-fold:

1.) In honor and preparation of the upcoming film X-Men: Days of Future Past which will be released on Memorial Day week.

2.) To flex my extensive knowledge of X-Men comic book lore and to remind folks why I’ve been dubbed the “X-Men dictionary” since childhood.

This being the first week, we’ll start off with the upcoming film’s basis: The Days of Future Past storyline as originally presented in Uncanny X-Men #141-142 (January-Feburary 1981). This two-part storyline was produced during Chris Claremont and John Byrne’s peak of popularity on the title and has been revisited several times since its release. It contains elements from George Orwell’s 1984 and the 1979 film The Warriors. And just to be clear, these events take place in a possible future of the main Marvel Universe. Alternate futures and alternate realites are designated by numbers. For example, the main Marvel Universe is Earth-616. The Days of Future Past reality is Earth-811. Below is a history of what led to the DoFP:

A new incarnation of the Brotherhood of Evil Mutants (led by Mystique) assassinates United States Senator Robert Kelly at Capitol Hill on October 31st, 1980. Senator Kelly has reasonable concerns about the growing number of super-powered individuals, but isn’t a bigot, per se. The Brotherhood’s plan to subjugate humanity through a political assassination backfired. Kelly’s death exacerbated mutant-human relations, with American citizens wanting action and revenge. In 1984, a rabid anti-mutant candidate is elected President. As President, he enacts the Mutant Control Act which would strip the United States’ mutant citizens of all of their rights. The United States Supreme Court deemed the act as unconstitutional, so the administration responded with a Presidential Order that reactivated the Sentinel program. The P.O. gave the Sentinels full authority to police the mutant population. The Mutant Control Act is eventually re-introduced and accepted, making it open season for mutants. The Genetic Purity Act is also introduced to regulate breeding. Citizens were divided into three different groups: “H” are the baseline human (allowed to breed), “A” are normal people with genetic potential for mutation and as such forbidden to produce offspring, and “M” for mutants (who have no rights whatsoever).

By the turn of the century, the Sentinels established Martial Law and completely took over the entire North American continent. Most super-beings, mutant or otherwise, were killed or incarcerated. They intend to establish their new world order throughout the rest of the world, prompting the preparation of a full nuclear strike on the United States once the Sentinels leave.

So, I bet you’re wondering where were the X-Men in all this?

After Kelly’s death and the enactment of blatant anti-mutant policies, Charles Xavier was killed and his mansion was demolished. The military units assisting the Sentinels found a survivor in the debris named Rachel Summers (she’s the daughter of this future reality’s version of Cyclops and Jean Grey). Rachel is handed over to the Sentinels’ chief scientist, the cybernetic Ahab, who conditions her and other mutants to hunt down and kill their own kind. Rachel (a telepath/telekinetic) excels at this task, but eventually broke her conditioning. Her punishment was a life-sentence at the South Bronx Internment camp controlled by the Sentinels. While here, mutants are forced to wear collars that inhibit their abilities and to perform slave labor.

There, she met up with the surviving members of the X-Men: Storm, Colossus, Kate Pryde, a wheelchair-bound Magneto and Rachel’s lover, Franklin Richards (son of Mr. Fantastic and the Invisible Woman of the Fantastic Four). Wolverine also survived in this future, but was never captured by the Sentinels. He acted as a liaison between his teammates and the Canadian Resistance Army. While imprisoned, the X-Men formed a plan: Escape the camp and cripple the Sentinels (the heart of their operations was in the Fantastic Four’s old headquarters, the Baxter Building). The other part of the plan was to change the past. They managed to create a device that neutralized and allowed them to remove their collars. Then, using Rachel’s ability to project astral forms through time, Kate Pryde’s mind was sent into the body of her present-day younger self to prevent Kelly’s assassination.

After convincing the present-day (Earth-616) X-Men of her story, they rushed to Washington, fought off the Brotherhood and successfully prevented Kelly’s death. Kate Pryde’s mind eventually returned to the future only to find that nothing had changed. She and Rachel were now the last X-Men remaining: Magneto volunteered to cover their escape from the camp (resulting in his death); Franklin Richards was burned to ashes by a Sentinel while escaping; Storm, Colossus and Wolverine all met their ends during their last stand against the Sentinels in the Baxter Building. It turns out, Earth-811 is just one of many divergent futures of the Marvel Universe, not its definite future. So when Kate Pryde was sent into the past, she actually landed in the past of Earth-616, not Earth-811 and thus accounting for why her reality wasn’t changed.

Aftermath of the Days of Future Past storyline:
1.) Rachel Summers transported herself into the present day and became a member of both the X-Men and Excalibur. Despite a rocky start, she has been accepted by the present-day Scott and Jean as their daughter. She’s operated under the code-names Phoenix and Marvel Girl.

2.) The highly advanced Sentinel known as Nimrod followed Rachel into the past and forced the X-Men to team with the Hellfire club to combat it. Nimrod later merged with the giant Sentinel known as Mastermold and was mystically transformed into the being known as Bastion.

3.) Earth-811‘s Franklin Richards appeared in the main Marvel Universe, but it was only his mental self projected into the past at the moment of his death during the X-Men’s escape. This four-part storyline was known as Days of Future Present (see below).

4.) Claremont introduced the idea of a possible relation between Nightcrawler and Mystique due to the similarity of their appearances. Thirteen years later in X-Men Unlimited #4 (March 1994), it was officially established that Nightcrawler is the son of Mystique abandoned by her at birth.

5.) Senator Robert Kelly’s near-assassination led to the creation of “Project: Wideawake”, a government sponsored failsafe Sentinel program to be used in case of an all-out mutant rampage. Ironically enough, mutant billionaire industrialist Sebastian Shaw provides his resources for the program.

2.) Dr. Bolivar Trask, the original creator of the Sentinels, died several years prior to this storyline trying to prevent his creations from taking over humanity. His impetus for creating the Sentinels was due to the fact that his own children were mutants. In X-Men: Days of Future Past, he is portrayed by Peter Dinklage.

3.) Some of you may remember elements of the DoFP from the 1990’s X-Men cartoon that appeared on Fox, in which the character of Bishop (see above) was the main focus along with the X-Traitor theory. The events depicted in the cartoon series are designated under Earth-92131.

4.) Uncanny X-Men #141 also marks Kitty Pryde’s first training sequence in the Danger Room. Professor Xavier’s weeks pf preparing it to be difficult for the young mutant were for naught as Kitty used her phasing ability to evade every obstacle.