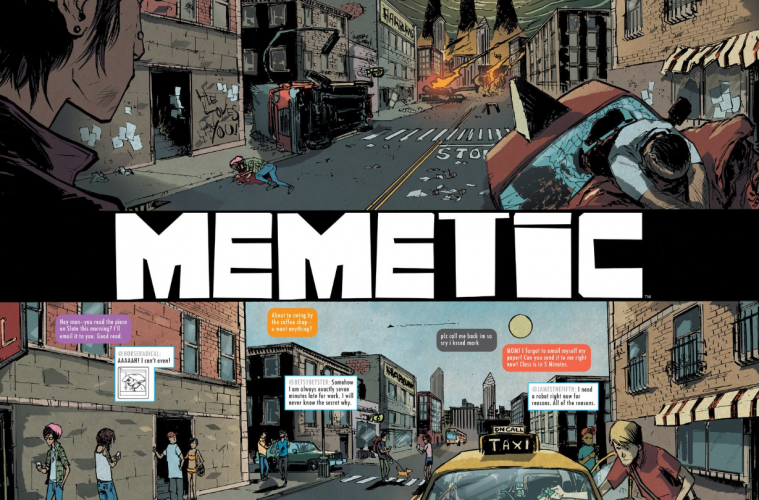 Memes drive people crazy, like the one released this week about how bacon and sausage cause cancer. 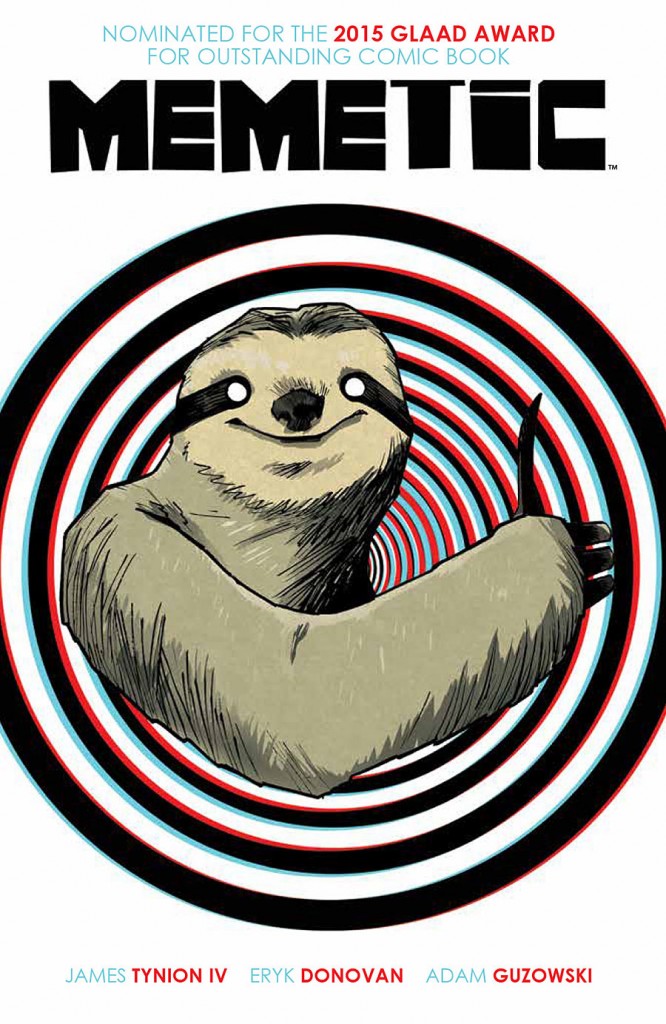 To the uninitiated, the medium of comic books is one consisting of three groups of characters: Costumed super-heroes, costumed super-villains, and everyone else. To them, these characters represent a simplistic view of good vs. evil on par with WWF story lines circa 1988. Seminal works such as Watchmen and The Dark Knight Returns took the archetypes of those aforementioned characters and deconstructed them in order to tell a story. Grant Morrison’s We3 took it further by using cybernetically-enhanced pets to create a parable about animal cruelty. These examples prove that comic books are literature and, if done right, can make for good stories laced with biting commentary. Mimetic is one of those examples. 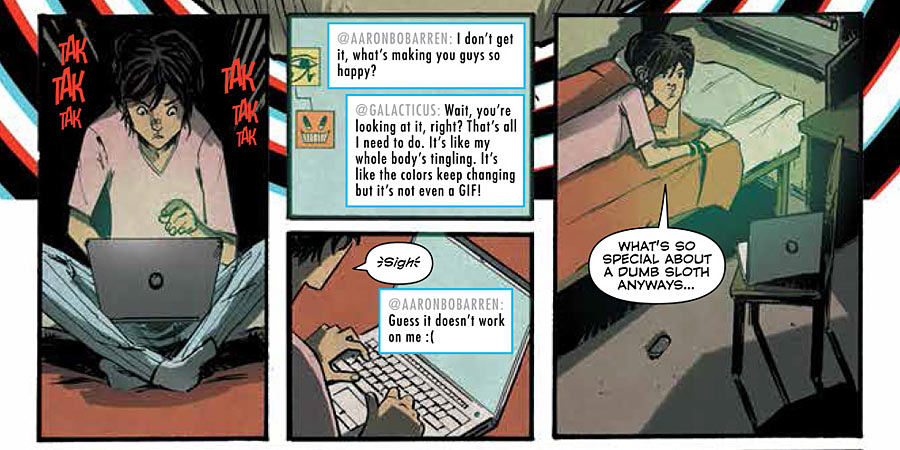 ABOUT: The premise behind this three-issue limited series is how one little idea can affect almost an entire population of people. In this case, the force directly responsible for this change…is a sloth. Or, more accurately, a picture of a sloth. It’s a mere image on the internet and the story begins when the image reaches Mimetic’s protagonist, Aaron Sumner. Aaron’s a college student who becomes aware of the Good Times Sloth (as the image later became known as) through his friend, Sarah, who treats the image like it’s the greatest thing ever since sliced bread. But she’s not the only one either.

Pretty soon, the image goes viral and ignites a trend among users of social media. After viewing the image, they feel euphoric. But that tingling euphoria later gives way to a gruesome, homicidal, bloody-eyed, cannibalistic zombification akin to AMC’s The Walking Dead. Aaron is spared from the effects of the image due to being colorblind. As is Marcus Shaw, a former U.S. military intelligence officer who’s near-completely blind. He refers to the rapid dissemination of the Good Times Sloth as memetic warfare. The zombies, “screamers” as they’re called, are driven by a homicidal urge to destroy anyone who isn’t a screamer.

I won’t give away too many spoilers, but it does have a 4-day narrative structure starting on the third day. Despite finding the creator of the Sloth image and getting half-ass explanations for why it affects viewers, the ending for the major and minor characters can most aptly be summarized with two words: “Surrender” and “Assimilation”.

MY TAKE: Eryk Donovan’s pencils have a Larry Stroman/Coraline influence to them. It’s comedic, disproportionate, and viscerally-cartoonish. Donovan’s style is appropriate since the story itself satirizes humanity’s absurdities. James Tynion IV gives life to the story by making it character-driven. Aaron’s immunity to the Good Time Sloth is partly due to him being heartbroken by his estranged boyfriend, Ryan. With his youth, he represents the current generation and their knack for both mastering and being enthralled by new technology.

Marcus Shaw, with his advanced age, blindness, and lack of tech-savviness is a symbol of the older generation’s view on technology. His inability to see is an ironic call-back to his time as the head of an intelligence agency. Learning of the “Good Times Sloth”, he immediately dubs the phenomenon as “memetic warfare” with an almost-paranoid fervor. With Memetic, Tynion uses a zombie apocalypse to ridicule humanity’s preoccupation with and dependency on information technology. The Good Times Sloth is a parody of frivolous internet trends, like that image from several months ago of that striped dress with a color that most people on social media were obsessing over to figure out. Considering the way that the Good Times Sloth affected people (so many characters claimed that “It changed my life!”), I think that’s Tynion’s way of commenting on the conformity and collective narcissism of social media. He even included a caricature of President Obama that was fair game for the sloth.

Feel the tingling yet?

The title, “Memetic”, which means “imitation”, is an elongated form of “meme”. A meme is “an idea, behavior, or style that spreads from person to person within a culture“. In this case, the sloth is a meme. It’s a wordless meme, but one that spreads from person-to-person with the same destructive effects because of how it was created. It was also a nice easter-egg touch on Tynion’s part with how Aaron’s Facebook friends list consists of Memetic’s creative team along with characters from Silence of the Lambs and The Shining.

What I didn’t like was the creative teams inability to give an explanation for why exactly the sloth image causes homicidal euphoria or what the real meaning was at the end. If a trivial image can unite humanity in the worst way possible, then Memetic is one of many wake-up calls for the digital-era’s single-minded obsessiveness.