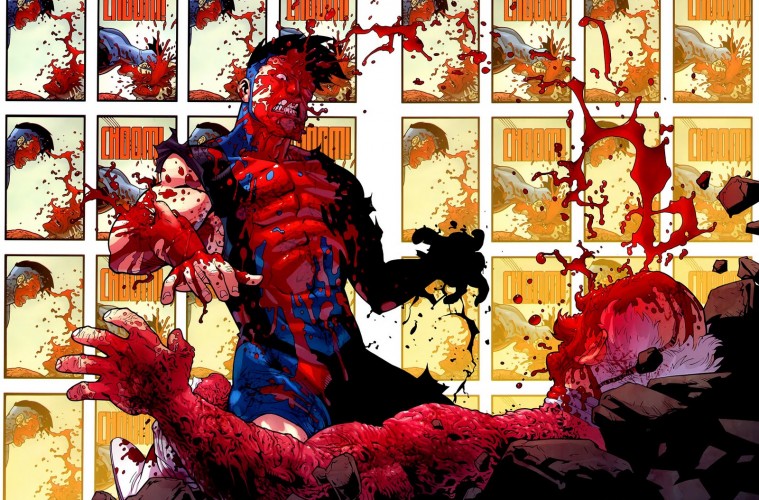 10 COMICS WE WANT HOLLYWOOD TO TURN INTO R RATED MOVIES

Guest WriterMarch 4, 2016
BooksComicsMovies0 Comments555 views
It’s no big secret that Hollywood is seeing red after Deadpool kicked ass and took names at the box office in February. Red as in “restricted” and not suitable for children under the age of 17, that is. Suddenly, the film industry is reconsidering their hard stance on R rated comic book to film adaptations. Already Warner Bros. has announced an R version of Superman v. Batman for home video. Meanwhile, Fox announced at Toy Fair that they will be pushing for a 17 and up theatrical release of the next Wolverine.
Is this a good trend? Time will only tell. If the studios go too far then we may be seeing a lot of needless sex and violence being applied to characters that don’t need it. However, if the studios adapt the following 10 comic storylines into blood-splattered action extravaganzas…we sure as hell won’t complain.
These are…10 Comics We Want Hollywood To Turn Into R Rated Movies! 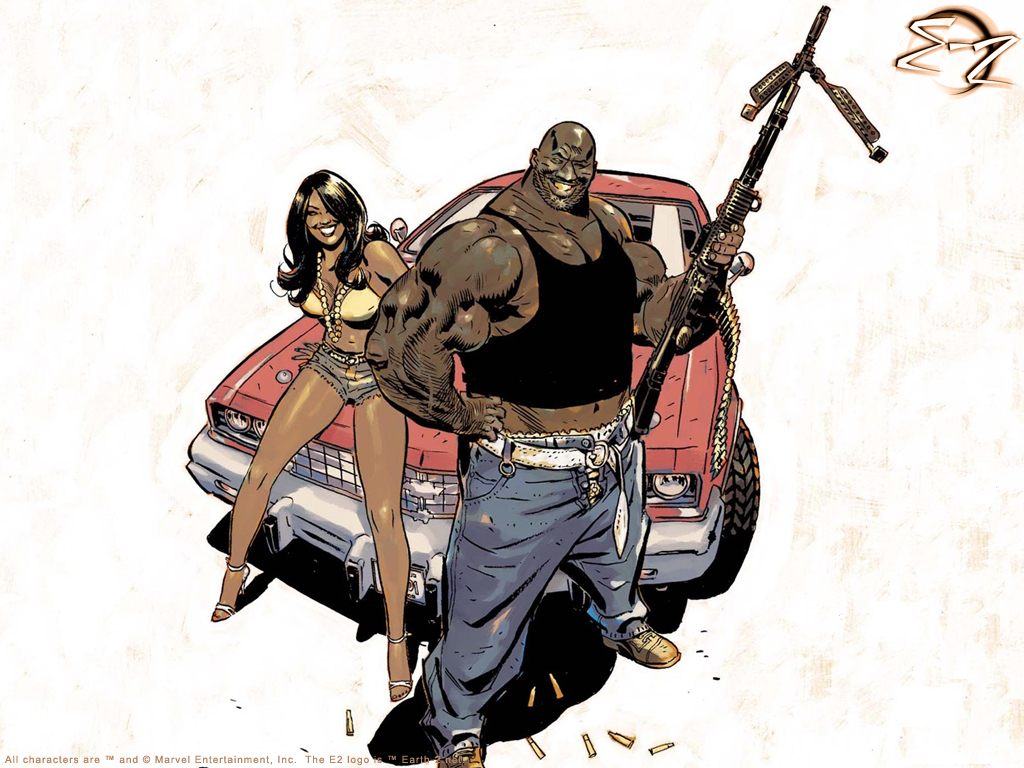 Barracuda (fittingly inspired by Nick Cave’s song ‘Stagger Lee’) was created by Garth Ennis and Goran Parlov as a foil to Frank Castle on their ‘Punisher MAX’ run.  He was immediately tagged as an irredeemably violent, racist, and misogynistic creation.  That’s why I want to see him onscreen.  Maybe Hollywood knows better than me and it will never work, but there has rarely been a more despicable protagonist.  Even the most brutally incorrigible of cinematic anti-heroes needs to “save the day” at same point (I’m looking at you, Wolverine).  While Barracuda’s standalone mini-series where he’s paid to accompany a hemophiliac kid in a warzone was a bit goofy (the same criticism that keeps Ennis’ gleefully regressive ‘The Boys’ off the list), I would love to see an adaptation that focuses on the true darkness of the character.  Think a drugged-up, bullet-filled Blaxploitation version of Yojimbo by way of the grit and provocation of The Devil’s Rejects.  Whoever helms the film just needs to be prepared for the onslaught of criticism as a result of basking in such politically incorrect nihilism. -Zak Attack 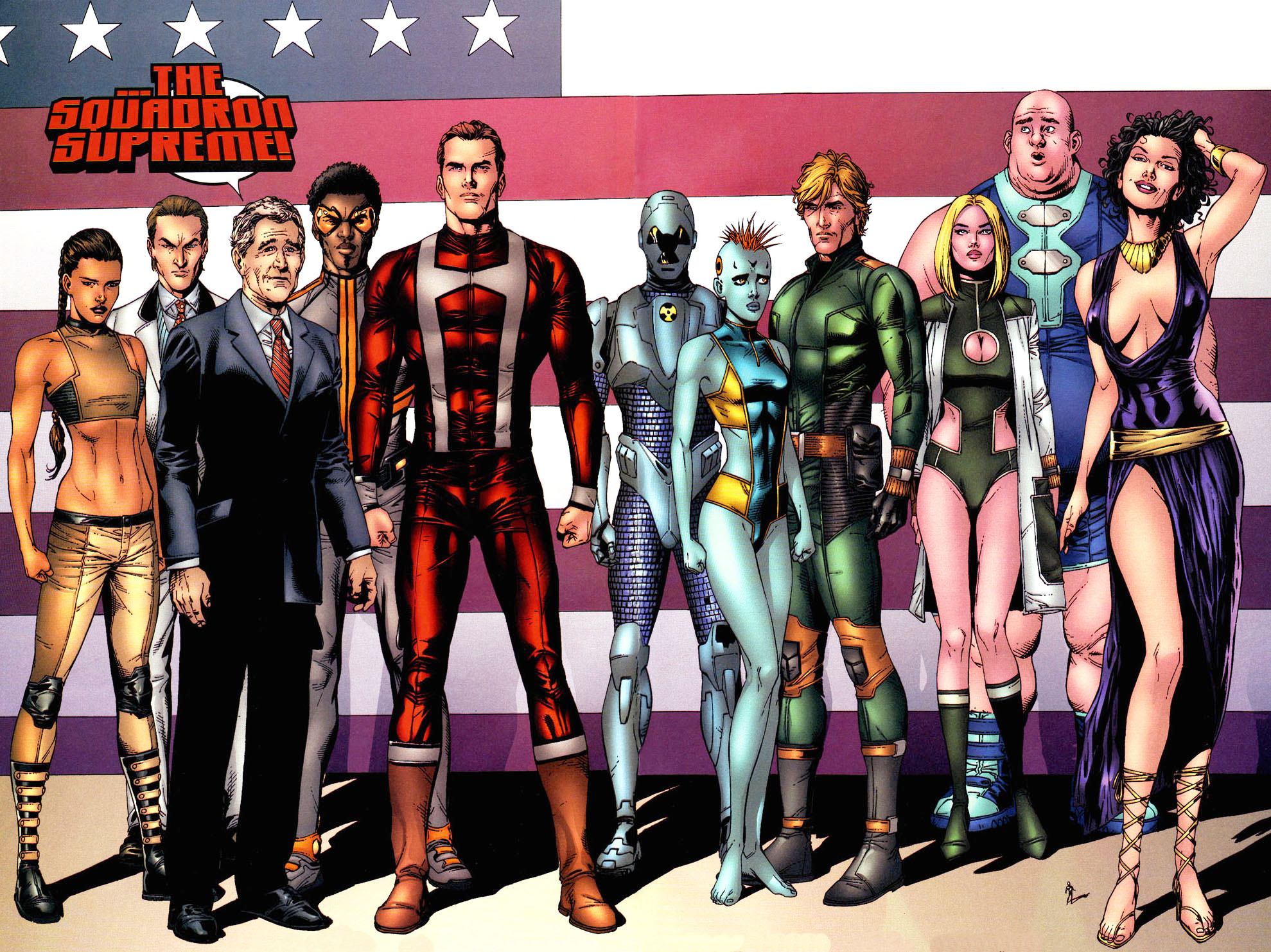 Originally conceptualized in the 1970s as Marvel’s reexamination of DC’s JLA, the super team called “Squadron Supreme” were rebooted and relaunched in 2003 with Supreme Power. Written by J. Michael Straczynski and artist Gary Frank, Supreme Power took the “Marvel’s JLA” idea and spun it into a mature readers only story that dared to ask what would happen if Superman, Batman, Wonder Woman, Green Lantern, and the rest of the Justice League took matters into their own hands. In Straczynski’s world, Kal-el’s ship got intercepted on the way to Kansas by the US government, Batman was a Black youth whose childhood trauma resulted in absolute distrust of white people, and Wonder Woman was a sexually liberated princess determined to put humanity under her boot. Unfortunately, Supreme Power was never allowed to meet its final conclusion in print (too controversial?), but an R-rated film adaptation could finally answer the question: What happens when the heroes don’t need humans anymore? -Troy-Jeffrey Allen 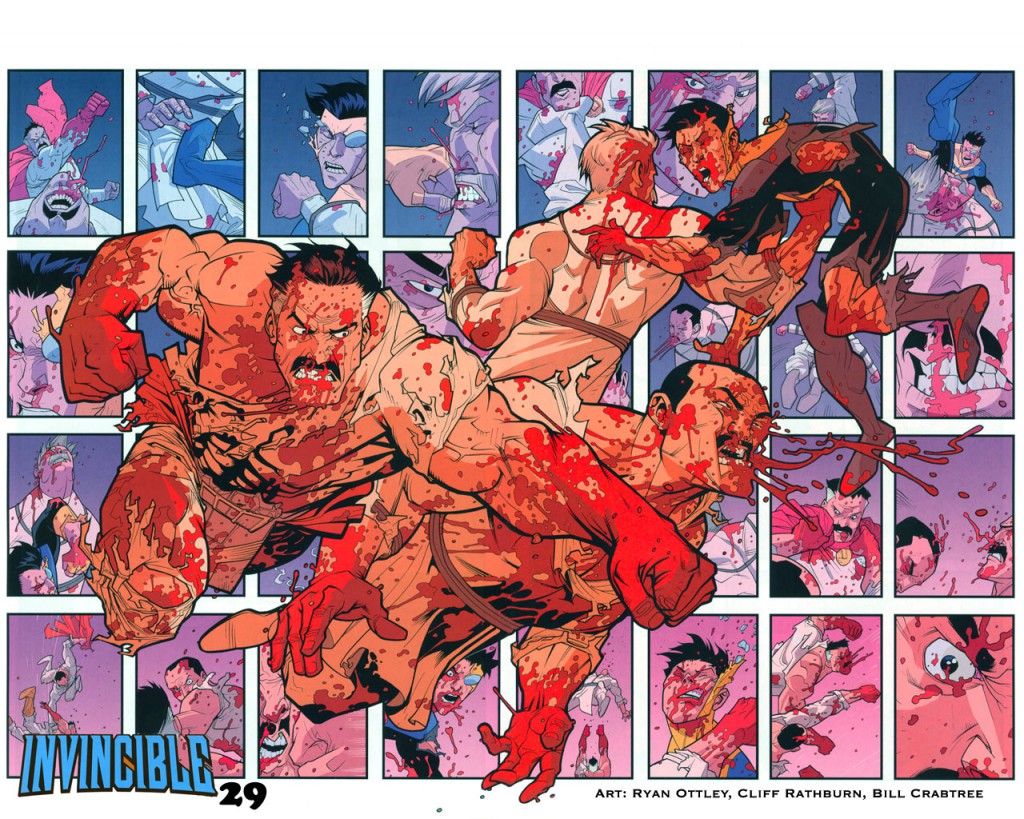 While not the first place someone might go when thinking of an R-rated comic, Robert Kirkman’s ‘Invincible’ has never shied away from violence, even if mostly on a cartoonish level.  Artist Ryan Ottley loves his viscera and the title has been sure to employ expert colorists like FCO Plascencia, John Rauch, and Jean-Francois Beaulieu who put the gore front and center without reveling in it.  It’s just a fact of life in the Invincible Universe that a super-powered person could, hypothetically rip someone in half or leave their face a bloody pulp.  This fact is most often used to powerful effect as an exclamation point to some of Kirkman’s stories instead of the entire statement.  I envision the film version fully committing to the real-world implications just barely touched on in Will Smith’s ‘Hancock’, but this would exist in a brightly colored world full of dense comic book mythology that also happens to have Tom Savini on gore effects. -Zak Attack 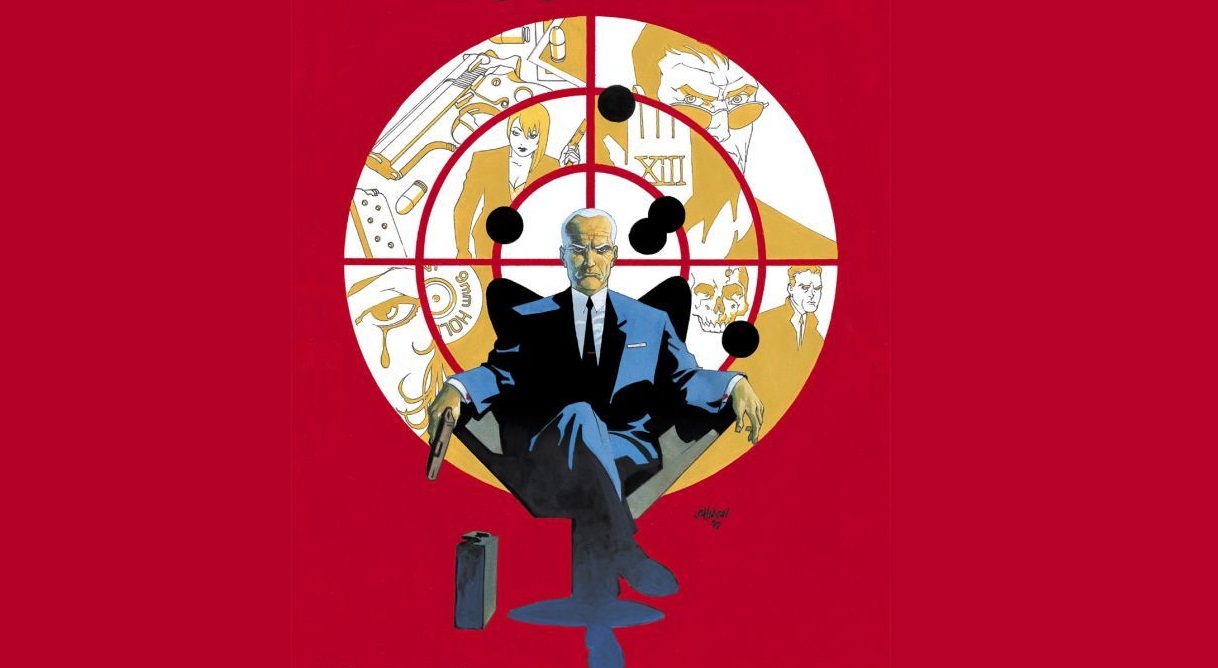 Revenge. C’mon, we’ve all been mad enough at someone once in our life to want to get back at them.
Well, Agent Graves gives people just that. Seemingly random, the mysterious Graves picks one person from anywhere in the world and gives them 100 untraceable bullets, a gun with no serial number, and he assures you that the cops will not get involved and not a single witnesses will come forward. You see, Graves already knows who you are, who destroyed your life, who cost you your job, who your wife cheated on you with, or who murdered your husband. Now he wants you to get back at them. But be warned: There is a possibility he might come back and ask you a favor. Written by Brian Azzarello and drawn by Eduardo Risso, Vertigo’s 100 Bullets is modern day crime fiction at its finest — a twisted tale of get back that turns out to be part of a conspiracy as old as sin itself. If the long rumored showtime series doesn’t eventually get off the ground then this series would be perfect for an R rated trilogy. –Troy-Jeffrey Allen 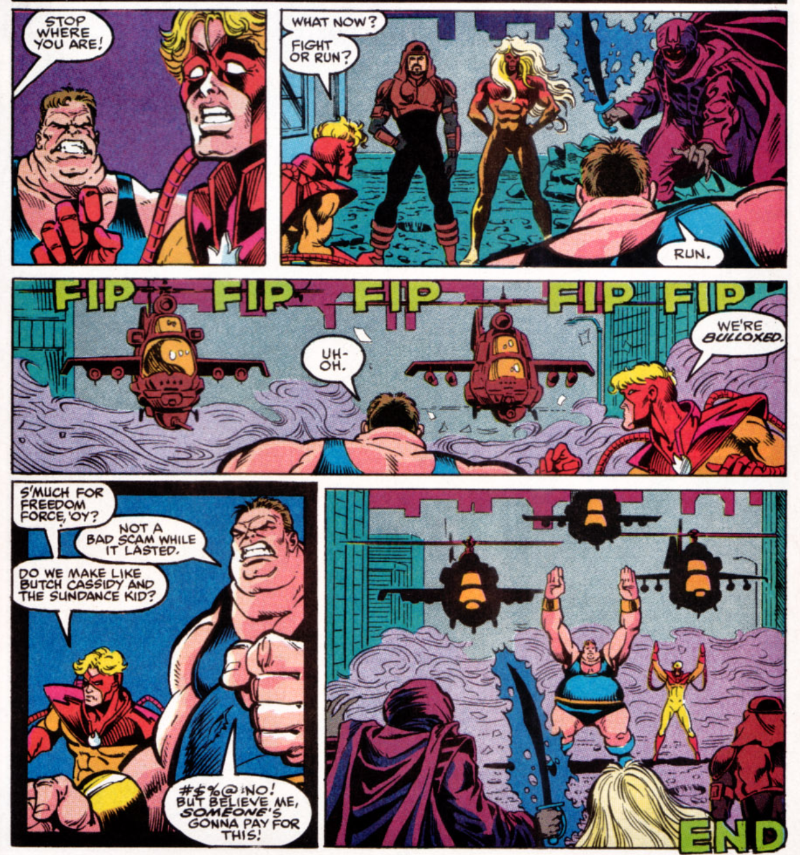 This was a storyline that took place in the 1991 annual editions of “The New Mutants”, “Uncanny X-Men”, and “X-Factor”. It was the Freedom Force’s final mission. They were sent to Kuwait to liberate a German scientist, but they encounter an superhuman Arabic group called the Desert Sword. They hold him hostage and kill the Super-Sabre, maim the Crimson Commando, and force the rest to separate during the battle. Pyro and the Blob kill the German to prevent the DS from keeping him, claiming they were following orders (they had no such orders). Avalanche manages to get himself and CC to safety and leave the Blob and Pyro behind. Government-sanctioned mutants in the middle east could make an intense rated R action film. -Sy Shackleford 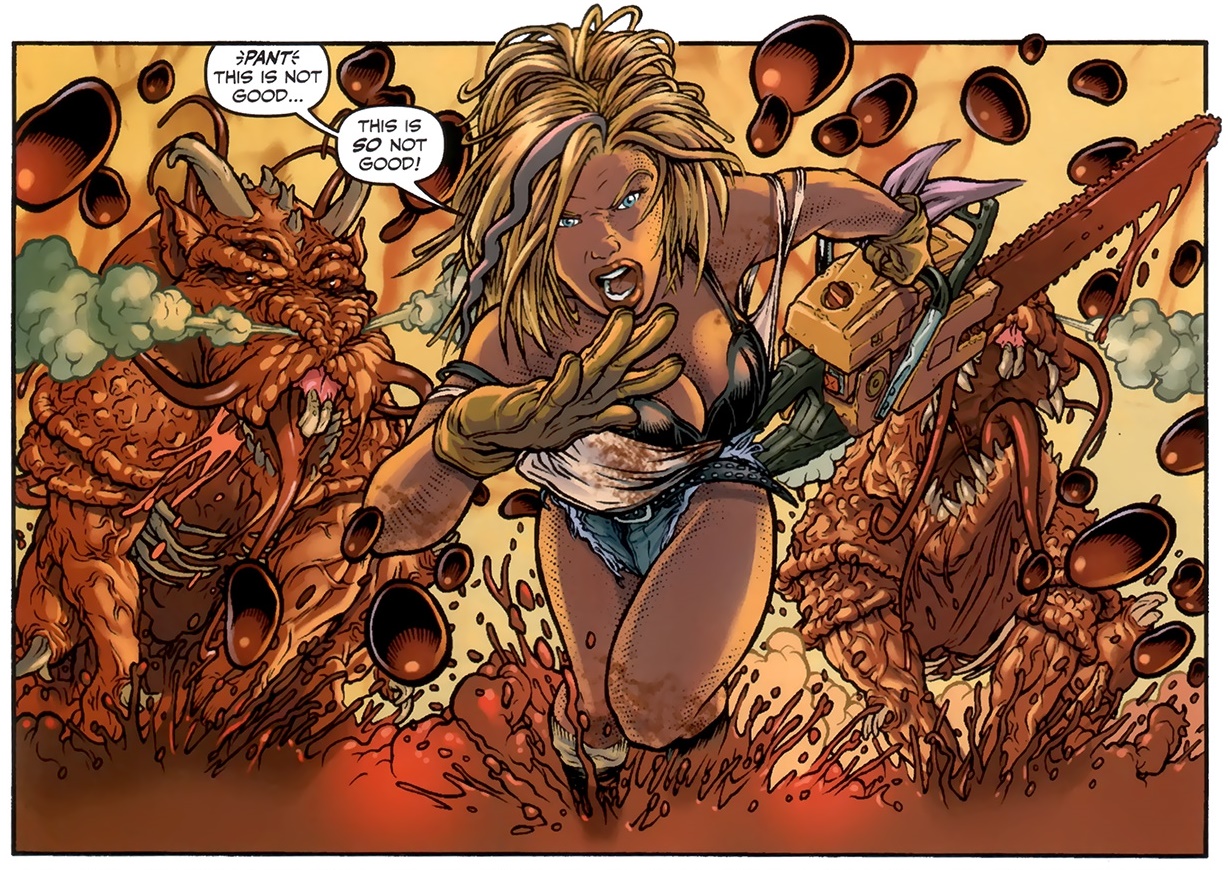 If Buffy Summers is the Nerf Herder of the supernatural slayers, then Nancy in Hell is the Lamb of God equivalent. Filled with crotch shots, heaving bosoms, phallic symbols, and explosive chainsaw action, Nancy In Hell is grindhouse insanity realized in comic form. Ideal for a b-movie adaptation with an obviously hard R.  Artist Enrique Lopez Lorenzana and writer El Torres knew exactly what they had and weren’t afraid to just let the gore and tits fly. Surprisingly though, the book (and it’s sequel: Nancy In Hell On Earth) pairs up all the nonsense with tongue-in-cheek dialogue and a shocking amount of biblical references. Conservative views aside, all this end of days stuff is appropriately unsettling and ballsy (and I’m not just talking about all the peek-a-boo loincloth shots). Especially when you consider the fact that this could’ve just as easily have been another bad girl/demon hunter comic. –Troy-Jeffrey Allen 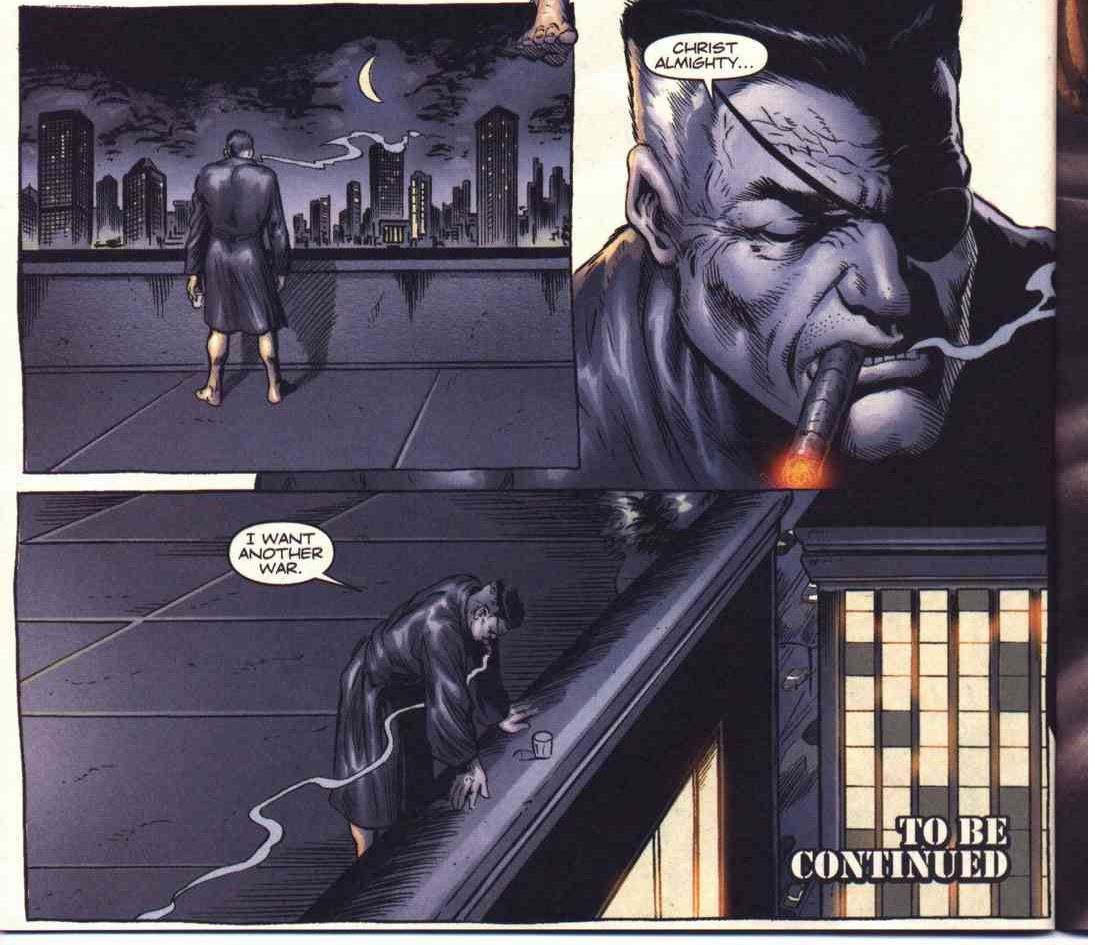 I recently revisited this short run comic written by Garth Ennis and drawn by Darick Robertson and I am so glad I did. It takes the old school version of Fury and explores what an obsolete warrior looks like in a technical age of manufactured war. It’s a fascinating deep dive into a character that always sits on the sidelines and is very hardcore, with loads of sex jokes and violence. While Fox having a runaway hit with Deadpool is making R rated films de rigueur, it’s hard to imagine Marvel proper letting Samuel L. Jackson cut loose on a random island hungry for war.  Regardless, it sure as hell would be fun watching them try. -Derek Scarzella 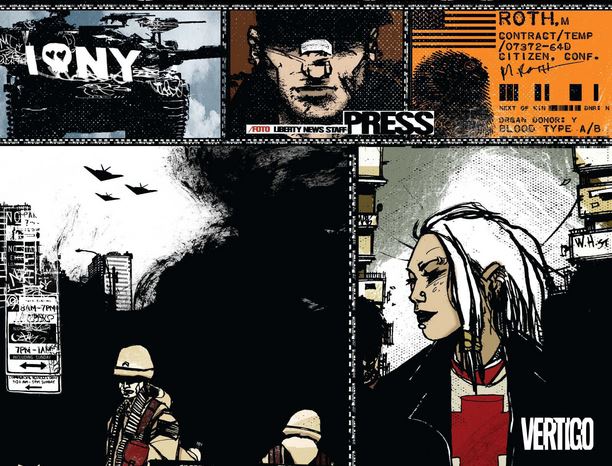 Out of all the many titles that Vertigo has printed under DC over the years, I think Brian Wood’s DMZ is probably the most ripe for the screen. Similar to Mad Max: Fury Road, DMZ has the potential to be an action-packed commentary on where we may end up if we don’t attempt to work together. The story follows photojournalist Matty Roth as he documents (and ultimately becomes a pawn in) America’s next civil war. Roth is dropped into Manhattan, a declared demilitarized zone and the convergence point for both the organized militia calling themselves “The Free States Army” and the actual US military. New York is caught in a stalemate between the US government and secessionists determined to take back their country over an ideal.  Rumor has it that DMZ is being developed as a TV show for the SyFy Channel. However, in order to capture the pure scale of Brian Wood’s dilapidated vision of NYC, DMZ needs a big Hollywood budget, a 2.5 hour runtime, and an R rating to make sure it gives viewers an honest take on the “two Americas” citizens of the United States live in. According to me anyway. -Troy-Jeffrey Allen 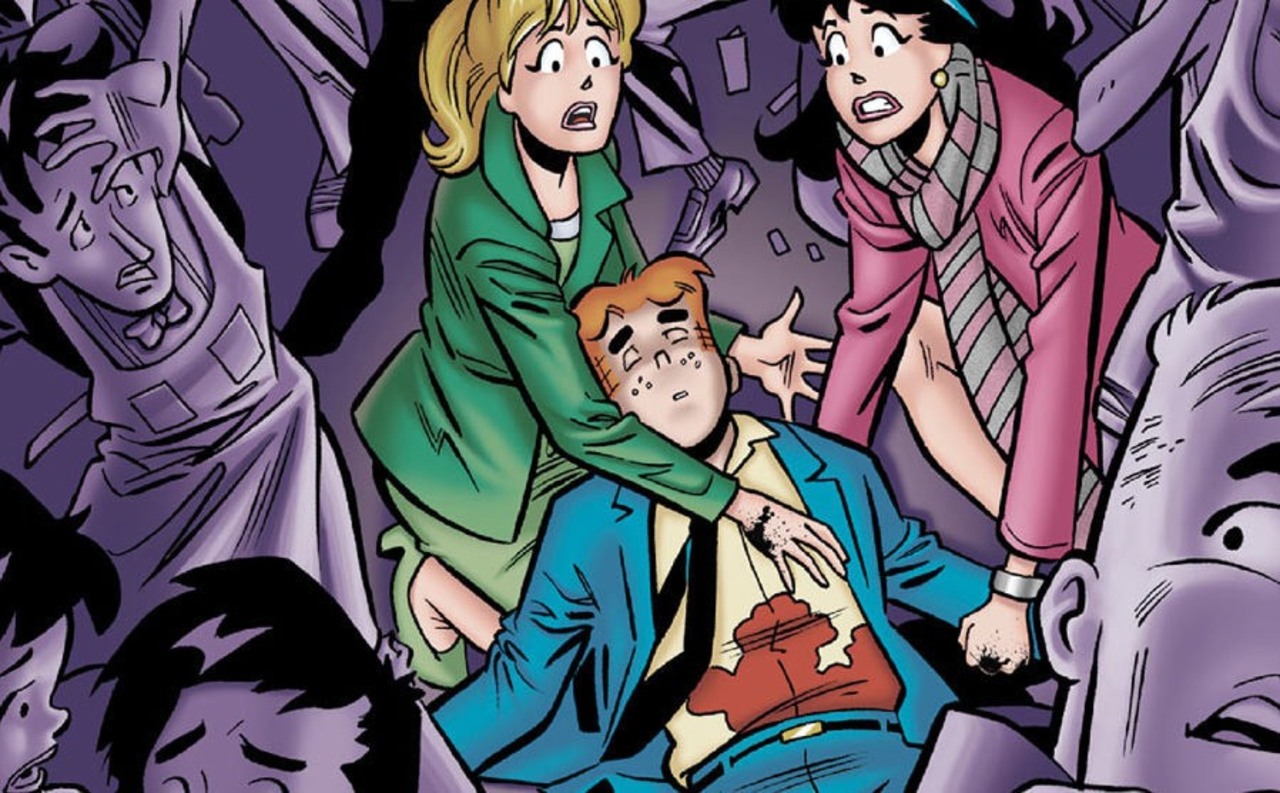 The CW show notwithstanding, a live-action Archie film should be in almost the same vein as 2010’s “Kick-Ass” to reflect teenage humor, cynicism, and obsession with sex and fantasy. An unconventional choice, yes. Archie has been wholesome and fun with no dark undertones since its inception, but it’s mired in the 1950s even with the recent edgier re-launch of the title. It needs to be more modernized with real teenage issues added to it. While there have been pornographic parodies, my idea of the film will be NC-17 at the most. Think of it like “Superbad” (2007), with Archie and Jughead being the main characters and best friends. Both have a plan to get with both Betty and Veronica, but neither one knows it. Here’s a twist: Jughead is Black. A rated R tale of teenage angst. -Sy Shackleford 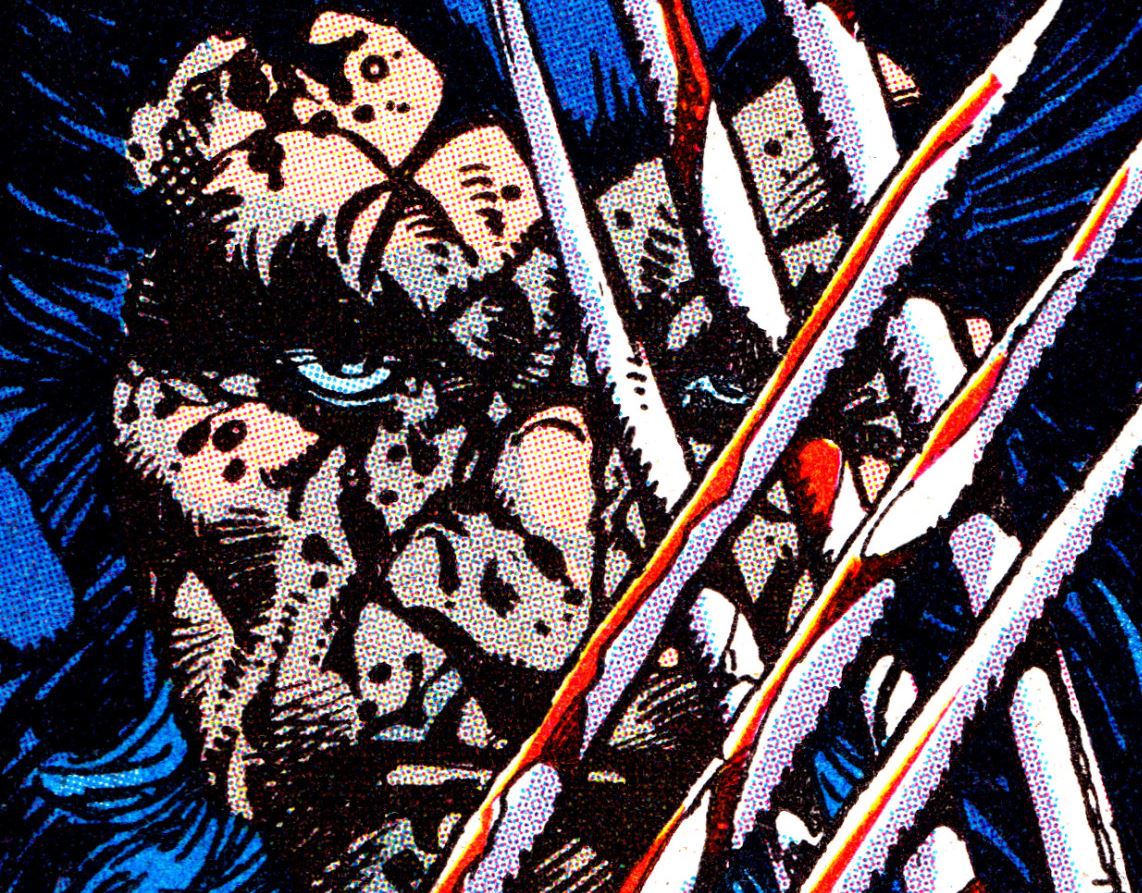 Yes, I know. This was called “Wolverine: Origins,” but no one wants to remember that abortion of a movie anyway and, most importantly, it didn’t do the infamous Wolverine origin story justice. The real Weapon X (technically “Marvel Comics Presents” Issue 72 – 84) was written and drawn by Barry Windsor- Smith and is a tour de force of psychedelic art, psychological intrigue, classic horror, and violence. It was the type of comic that had to be hidden from your parents. It also provided an air of mystery around Wolverine that lasted for two decades until Marvel decided to reveal the origins of everyone’s favorite X-Man. It is NOT a classic superhero story and only a true R rated showing could gives fans an origin of Wolverine that features torture, amnesia, and the epic creation of a brutal murderer. -Derek Scarzella 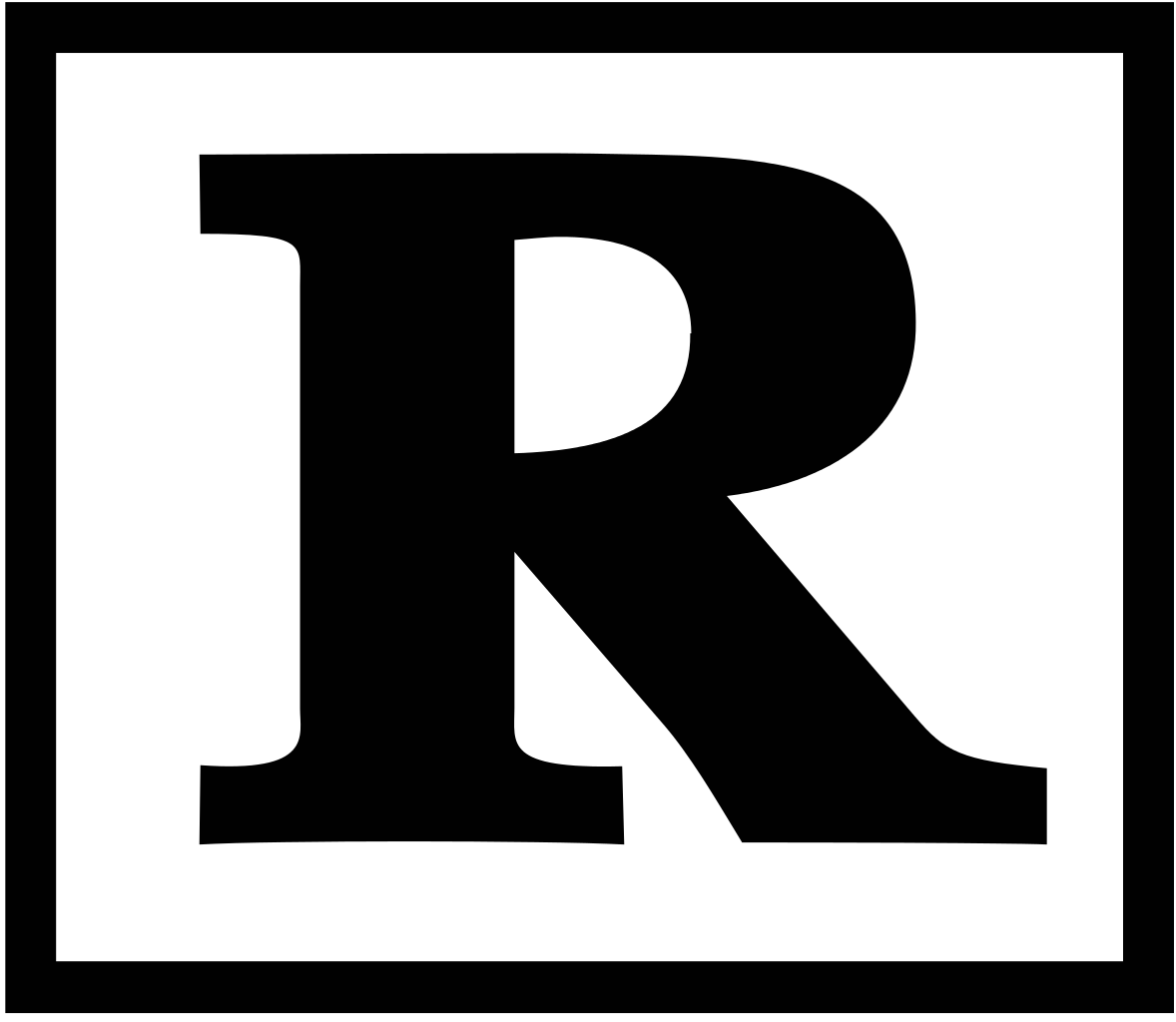 And that’s it. With so many comics however, it is incredibly easy to gloss over plenty of other stories that deserve an R rating. What are your picks, readers? Let us know in the comments section below.