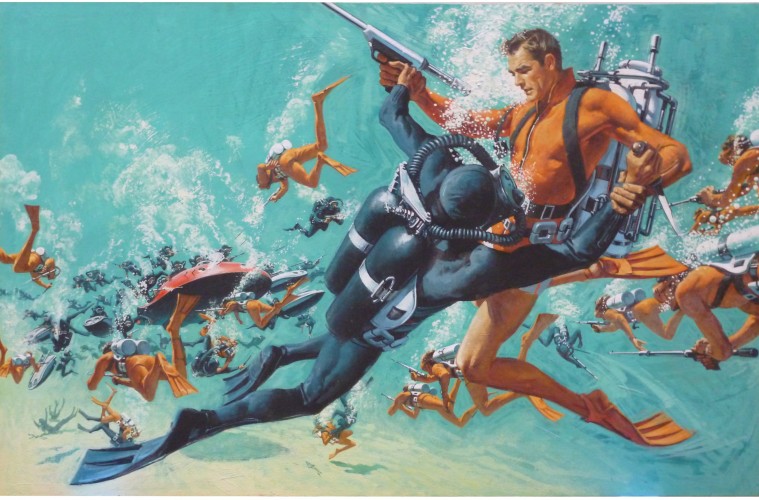 GREAT MOMENTS IN ACTION HISTORY: THE UNDERWATER BATTLE IN THUNDERBALL

After three critical and commercial successes, Thunderball was the first misfire in the James Bond series.

After Dr No introduced the world to 007, From Russia With Love and Goldfinger refined the elements that were to be become the hallmarks of the franchise: charismatic villains, exotic locations, glamourous women, and dangerous henchmen.

But while the two sequels that followed Dr No expanded the Bond universe, Thunderball was the moment where those elements became formulaic. The thrills lack the verve and originality of their predecessors. A fact not helped by a cumbersome plot which takes an age to crank into gear.

Yet, despite the flaws, there is one element where Thunderball clearly outstrips the films that had gone before it: the action set-piece.

With an insatiable desire for the spectacular and bigger budgets at their disposal, producers were free to dream up ever more ambitious sequences with which to wow audiences. And in Thunderball this determination culminates in the bravura underwater battle that provides the film’s finale.

This 10 minute sequence sees 30 or 40 armed frogmen battle each for control of two nuclear weapons. Judged today it’s perhaps easy to overlook just how eye-popping and original this scene must have been.

We have multiple action franchises providing huge, imaginative set-pieces. In the Sixties, outside of Bond, no-one attempted scenes of this scale or novelty.

And let’s not ignore the technical challenges. Even now this would be a difficult sequence to film. Imagine trying to choreography this many stuntmen and divers underwater. Yet director Terence Young and his team, without the benefit of lightweight cameras, fancy radios or computer effects, pulled this off in 1965. Thunderball won an Oscar for best visual effects. It’s hard to argue that it wasn’t deserved.

Accentuating the visuals is John Barry’s fantastic score. It helps propel the scene along. It’s insistent melody repeating at ever increasing speed, adding urgency and drama to the brutal battle raging on screen.

Thunderball may only be mid-ranking Bond, but that should not stop us recognising that it features one of the great moments in action history.