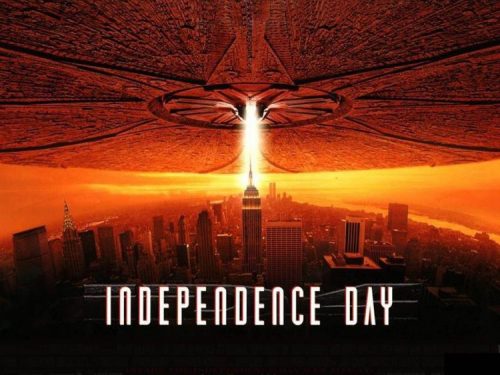 When I was 13 I went to the cinema with my family. My mother has never been very big on watching movies so her taking us on a trip to the movies was a big deal, a rare treat. It was 1996 and the cinema had just been updated, meaning much more comfortable seats, a bigger screen and, most importantly, Dolby Digital Surround Sound. According to the trailer the movie we were going to see had cutting edge special effects, epic battle scenes and the destruction of at least one major American landmark.

For the next two and a half hours I was glued to my newly upholstered seat at the visual and aural spectacle unfolding before me. I had never seen or heard anything like it, never imagined that a cinema experience of that magnitude was even possible. My 13 year old mind was completely blown and I left the cinema with a feeling that going to the movies would never be the same again.

That movie was Independence Day. 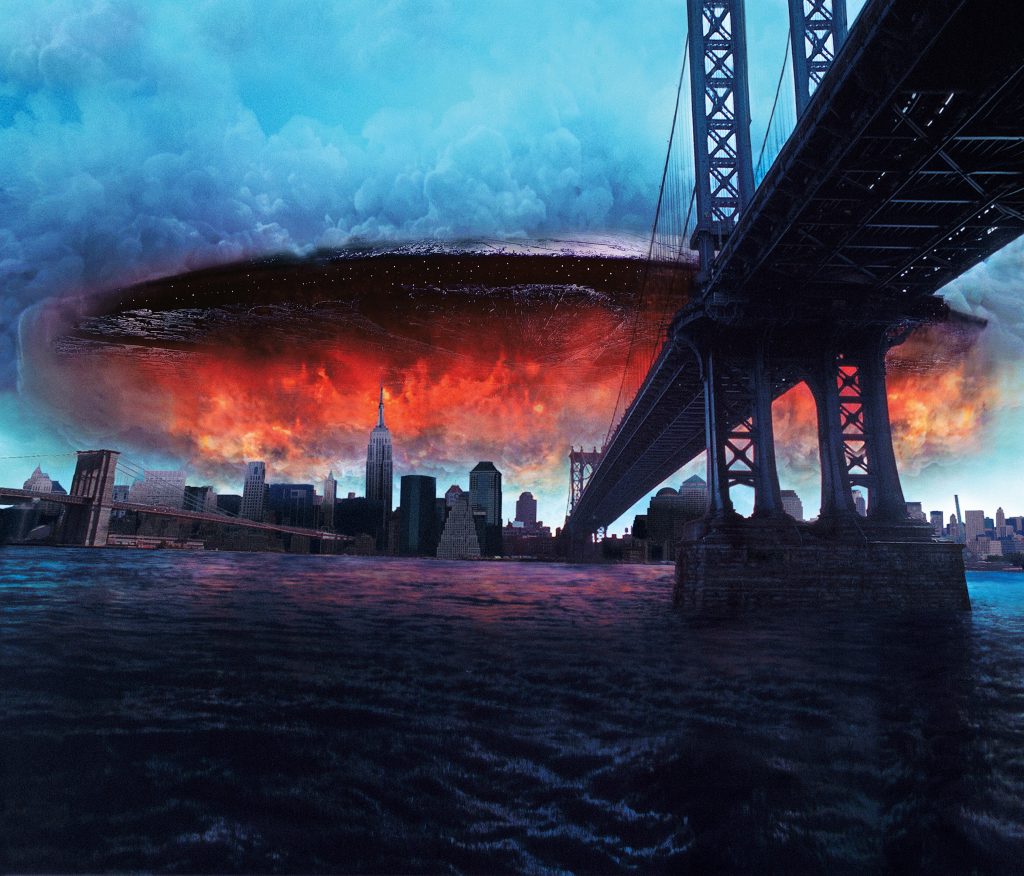 Independence Day: Resurgence is out at cinemas on 23rd June, a sequel nearly two decades in the making. But before I sit down once more in my local theatre, snacks and slushie in hand, I thought it was worth taking a look once more at its predecessor, once loved but now more often maligned.

Independence Day is a sci-fi disaster movie directed by Roland Emmerich. The movie featured an all star ensemble cast which included Will Smith, Bill Pullman, Jeff Goldblum and Vivica A. Fox. In the days before the 4th of July a huge spaceship arrives containing large and unattractive aliens. The aliens have much more advanced technology and are hell bent on the annihilation of the entire human race. As the intentions of our visitors become clear it is up to the President of the USA, a cable repair man and a fighter pilot to defeat the aliens and save the world.

Even at the time this kind of story was nothing new. Independence Day is basically a classic 1950s alien invasion story updated for the 1990s, and by updated I mean given a hefty dose of steroids. The film is big, it is loud and it is grandiose in its execution. At the time of release it wasn’t just a movie, it was an experience. This movie even helped inspire a fad for ordinary people, including my father, to buy the biggest home cinema sound system that they could get their hands on in order to try and recapture the visceral feel that the movie provided at the theatre. 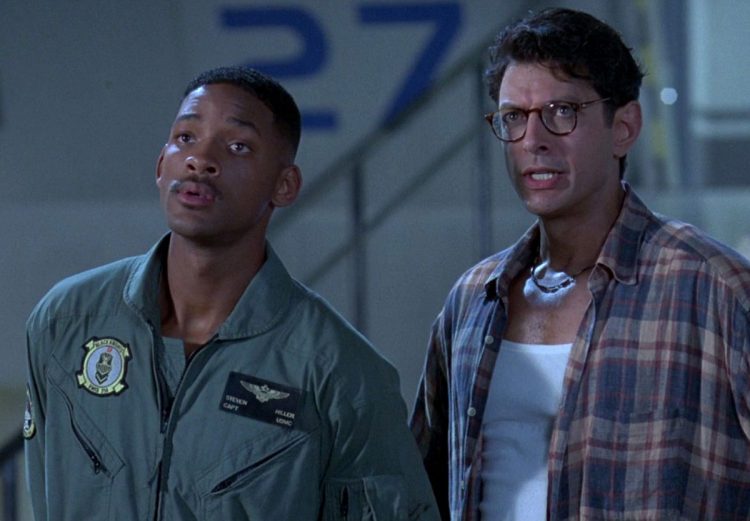 In the time honoured tradition of dumping all over popular things the critics in the years since the release of Independence Day have not been kind. A common criticism of Independence Day is that the characters, while likable, are nothing but vapid stereotypes. A movie with such a large cast leaves little room for in-depth character building and so Independence Day does rather rely on existing well established character tropes, combining them with a lively script to introduce and endear each character to the audience in as efficient a manner as possible.

Another common complaint is that there are some fairly big plot holes. How do David and his father manage to drive from New York to Washington in time when the roads are jam packed with people fleeing the cities? If the aliens wear biomechanical suits to protect themselves how come they can be floored by a single punch? How is a 40-year-old space ship still compatible with the modern technology of the mothership? In what universe would the leader of the free world be allowed to just jump in a fighter jet and join a battle?

These are legitimate questions. However for me, even as someone who enjoys overthinking movies, answering them is not really that important. Independence Day is the definition of a popcorn movie, 145 minutes of pure no brain needed entertainment. If you’re looking for deep meaning or intellectual stimulation? You are barking up the wrong alien invaded tree. This blockbuster does not offer introspection or some kind of thought provoking message about the human condition, what it offers is a feelgood spectacle. I vividly remember an older teen sitting next to me in the cinema who was so awed by the first alien attack that he spent the whole thing repeatedly shouting the F word. The destruction of the White House was such a memorable moment that it became a Roland Emmerich trademark, so much so that he used it in two other movies (2012 and White House Down) 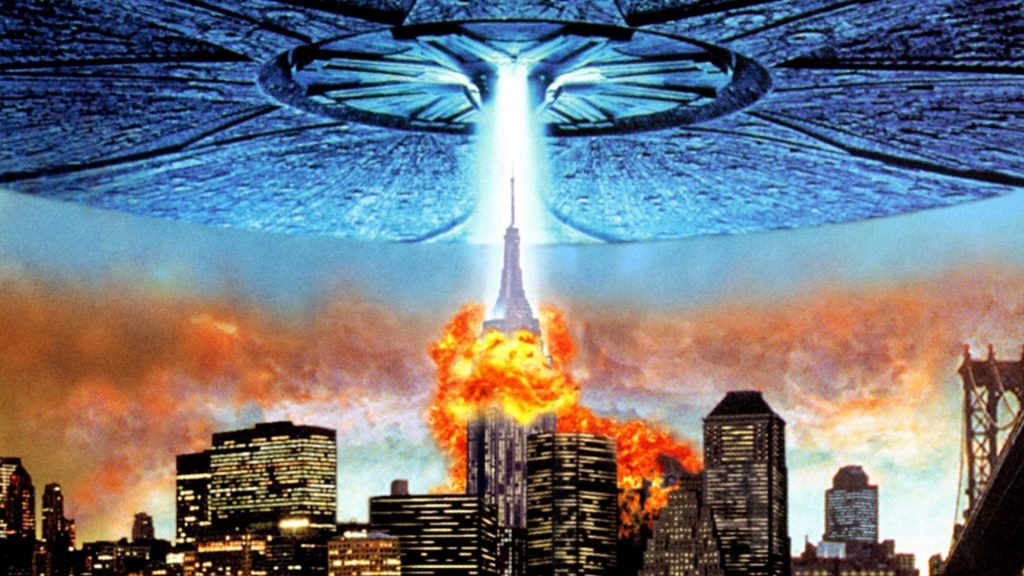 For me movies like Independence Day and Jurassic Park were the beginning of a new era of cinematic presentation. The technology to create striking computer generated imagery was just coming into its own and awe inspiring visuals were now held equally as important as characters or storyline. The visuals were stunning at the time but it was moments like this, the pre-battle speech, that really stayed with us. It all may seem a bit hokey and critically unfashionable now but these are the movies that are remembered by an entire generation. I’m not ashamed to say that Independence Day holds a special place in my heart and probably always will.

Which brings me to Independence Day: Resurgence. It has become increasingly obvious that Hollywood is willing to exploit every bit of nostalgia that an audience holds and making sequels decades after the original is increasingly becoming a thing (particularly if they can’t get away with a reboot) The problem with this is that nowadays complex computer rendered visuals are so commonplace as to be barely worthy of note. Anyone can use these kind of effects on a home computer and put the videos on YouTube. My concern is that Independence Day: Resurgence will suffer from the same problem as Jurassic World, focusing so much effort on trying to recapture the awe generated by aesthetics that it forgets to make the story interesting or the characters likable, or even memorable. Independence Day: Resurgence can have the best effects that the modern movie making process can offer but without an engaging plot and interesting characters? It’s just fireworks on a screen, a moment of flash and bang and then almost instantly forgotten. It is safe to say that I greet Resurgence with a degree of cynicism, after all I am not 13 anymore. However I do hope that this sequel is at the very least a worthy successor, but without the charm of Will Smith? It is going to be a difficult sell.

So welcome back to Earth biomechanical suited beings. The entire planet has changed and the audience has changed along with it. The world is ready for you, and so am I.