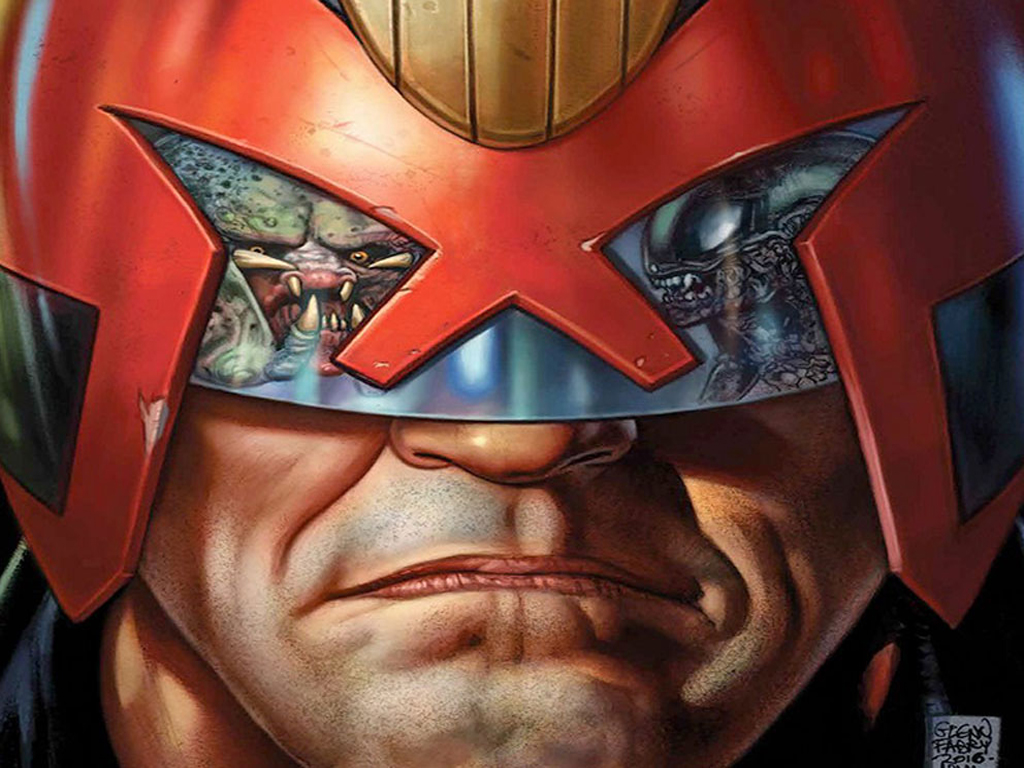 ABOUT: In a dystopian future, Judge Dredd is out with fellow Judges seeking criminals who have escaped Mega-City One. Determined to bring them all to justice, one of the convicts escapes into a swamp and jungle area of the Cursed Earth called the Alabama Morass. Within are a group of animal men created by a mad geneticist named Dr. Niels Reinstöt. These animal men don’t take kindly to trespassers, especially when a Predator shows up in this region. In a rare turn of events, the Predator’s own game is turned against him and he gets captured by the animal men.

After his transport ship is examined, it’s determined that he’s an intergalactic hunter/trophy collector. Revealing that he’s genetically engineered his own breed of Aliens, Dr. Reinstöt intends to use it on the Predator. But before he can, his animal men alert him to two sets of intruders: One being Judge Dredd hunting his elusive criminal and the other being a group of Predators looking to retrieve their captured member…by force. 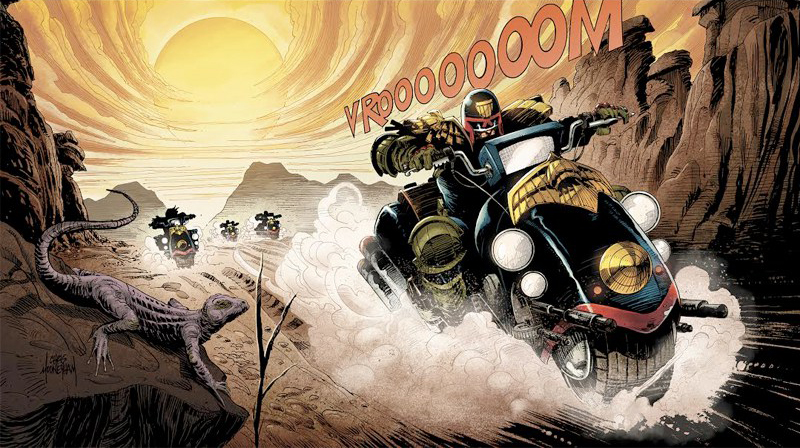 MY TAKE: Though I’m only familiar with their on-screen counterparts, this wasn’t a bad start to the crossover. I like the allusion to The Island of Dr. Moreau that Dr. Reinstöt and his anthropomorphic animal men represent. The lead animal man, a bipedal deer aptly named Buck, draws some connotations to recently-deceased auteur Michael Cimino, director of the Oscar-winning film The Deer Hunter (1978). Seeing the Predator get captured by them early on set the tone for the action that’s going to follow when his people break him free from captivity.

Dr. Reinstöt used a sample of Aliens DNA to duplicate their species. He believes they represent adaptation to its ultimate extent, so it’ll be interesting to see just how wrong he is. He also has traits of a typical Bond villain: Using exposition dialogue to explain his master plan, only to have his speech interrupted by one of his henchmen. Honestly, the Aliens I can do without for now. It’s the potential dynamic between Judge Dredd and the Predator that’s more interesting. Once Dredd perceives the Predator as a criminal, he’ll be treated as such. The Predator may see in Dredd a worthy opponent and may play against him for sport until he kills him and gives his body to an extraterrestrial taxidermist.

John Layman’s writing starts off good, but it’s Chris Mooneyham’s art that takes the cake. I like his depictions of the Predators in battle-mode and the hybrid animal men. His style is most certainly reminiscent of John Romita, Jr. Dredd’s original prey in this issue, a smiley-faced robot named Archbishop Emoji, may also make a re-appearance during the crossover. His gimmick seems like a foil to Dredd’s grim seriousness and may turn out to be some form of satirical commentary on the prevalence of emojis as a form of communication. Whatever the case is, I’m interested in who will be the last man standing in this crossover. My money’s on Judge Dredd.