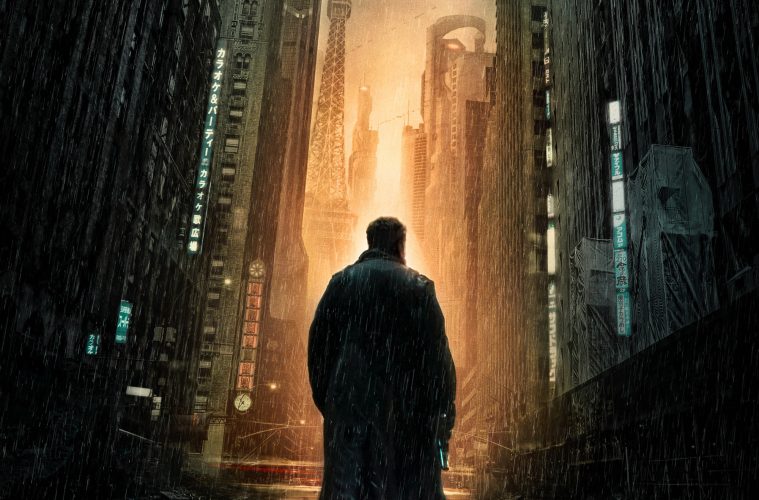 “The revolution did happen, just not really the way people thought it would.”

This slightly awkward line of opening narration is our introduction to the dystopic sci-fi world of 2047:Virtual Revolution (dir. Guy-Roger Duvert). The revolution has taken the form of ‘verses’, virtual reality worlds where gamers, connected through a neural interface, can explore, adventure and screw to their hearts’ content. Most of the world’s population have permanently linked themselves to these virtual worlds and are known as the ‘connected’. This leaves a small population to roam the real world either eschewing the verses entirely or living as ‘hybrids’ who only spend part of their time in the virtual world. One such hybrid is Nash (Mike Dopud, Arrow), a shadow operative/detective working for Systernis, one of the big corporations behind the virtual world technology. 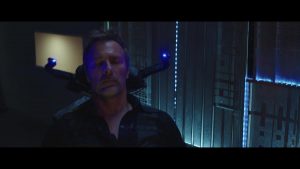 A fringe group known as Necromancers have made it their mission to disconnect humanity from the verses, sometimes resorting to lethal means. Nash is tasked by Dina (Jane Badler, V), the head of Systernis, to investigate this group both in the real and virtual worlds and shut them down. As he uncovers more truths about Systernis and the Necromancers, Nash begins to question his loyalties and must ultimately decide the fate of the new virtual revolution. 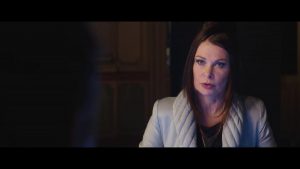 Frankly put, the story beats won’t catch anyone off guard. One can guess from the outset that the megacorporation might have ill-intentions and that the resistance fighters might actually be the good guys. It’s pretty stock standard reluctant revolutionary stuff that you’ve seen in everything from Star Wars to Casablanca. Without spoiling anything I’ll say that the script does make some bolder narrative choices on the back end that leave interesting questions for the viewer to ponder as the credits roll, even if they do seem to come out of left field.

While the story may be lackluster the overall production design fares much better. It’s quite impressive what the filmmaking team was able to accomplish with a modest budget. The aesthetics are unmistakably Blade Runner, dark, grimy, rain-soaked streets with loud neon technology assaulting the eye sockets at every turn of the head. The highest compliment I can pay here is that the world of 2047: Virtual Revolution could conceivably be part of the Blade Runner universe by the looks of it. Beyond that, however, the film fails to find its own unique visual style and lacks the sort of monumental or iconic art direction that the best science fiction films can deliver. There just isn’t much that stands out, unfortunately.

Ditto with the ‘verses’. There was an opportunity here to create something incredibly striking and the film misses the mark. What’s on display is a high-fantasy sword and sorcery Game of Thrones-esque world and a futuristic warzone à la Gears of War or the latter Call of Duty games. They are essentially represented by a forest/dungeon and a dusty warehouse respectively. Nothing particularly special, nothing particularly exciting. Consider the unique virtual world of Sword Art Online for example or the way The Matrix used color and sparse art direction for its artificial reality. I suspect that budgetary concerns played a part in the design decisions here but it’s kind of disappointing that the *real* worlds within 2047: Virtual Revolution are more visually interesting than their virtual counterparts.

Another element that holds the film back is the shooting style. Some of the action sequences are exciting, for example, there is a shootout that occurs in the warzone world that I found entertaining. However, a lot of the action is relegated to wide shots that tend to make the fight choreography look awkward at times and boring at others (a lot of older movies tend to suffer from this phenomenon). The dialog scenes also suffer from visually uninteresting camera work, the shots ping pong between mediums of the characters as they speak their lines (short/reverse shot-itis – let’s call it.) For example, take the scenes featuring Nash and Dina, there are 3 or 4 of them and they all take place in the same room with nearly identical camera shots. No doubt this was done for the sake of expediency and budget, which I can appreciate, but this would be all the more reason to drastically change up the camera work for each scene. It’s a very workmanlike way to shoot a movie and I’ll stress that it’s not necessarily bad, it’s just not very captivating.

Couple other minor critiques of the film: First off, it’s way too reliant on narration, there is a lot of it and it all comes off as a lax way to convey plot points, recap events or define what Nash’s next move will be. It’s a classic case of ‘show don’t tell’. There’s way too much telling and not enough showing. Lastly, and this is super-minor, but I couldn’t stop thinking about it all throughout the film, I wish the movie was in French.

A large portion of the cast appear to be native French speakers, and it’s not that they have any trouble speaking their English dialog, it’s more that it comes off as somewhat stilted. You get a sense that they’re not as comfortable with their lines as they could be if those lines were in French. Ok, some of the English line deliveries are downright awkward, but it’s more about how the language barrier is holding back some of the performances. You get a definite sense of this when a character will rattle off the occasional French street name or word. It just sounds so much better. The setting is New Paris for corn’s sake!

Okay, so all of that being said, did I enjoy the film and should you watch it? Yes, I did and yeah you’ll probably dig it. At the end of the day I can appreciate most indie film efforts, especially when you can tell that a lot of passion and hard work has gone into a project. Again, given what Duvert and his team were able to achieve with the resources they had is great. What we have here is an ok sci-fi story with some entertaining moments and solid, if not standout, production design.

The film has interesting things to say about our lust for the fantasy and escape that gaming can provide and how we’re all on the path to becoming techno-veggies in one way or another. We trade our humanity and personal connections for comfort and the artificial connections we make with people in the virtual world. There is also an interesting comment on how people tend to represent (or misrepresent) themselves via avatars in the verses. But these are only slight branches on which 2047: Virtual Revolution hangs an average storyline. If the film had dug deeper into some of these topics it would have been all the better for it. As it stands, the film does enough to warrant a look if the trailer looks at all interesting to you, just don’t expect anything that will stand heartily amongst the films that inspired it. 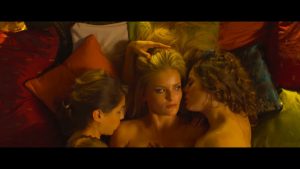 What I will do is keep a keen eye out for Guy-Roger Duvert’s next film. The composer turned director has a nice effort on his hands with 2047: Virtual Revolution and I think given a more unique story to tell that allows him to get out from under the shadow of his influences, he could create something truly special, and I very much look forward to seeing that.