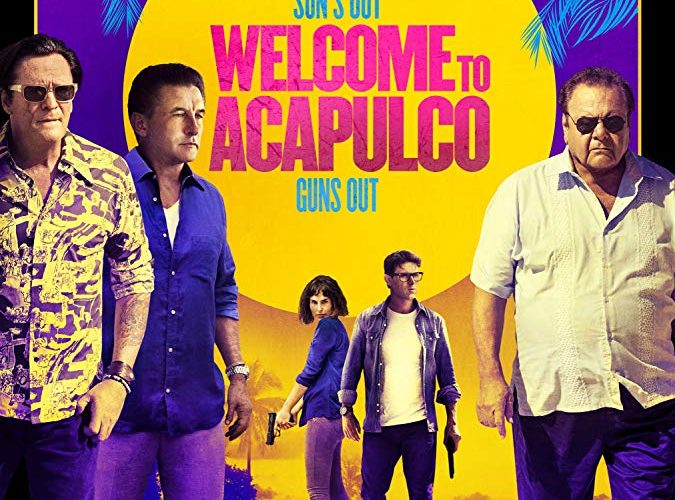 WELCOME TO ACAPULCO, a Crime Fantasy with Sun-Soaked Action and A Video Game Vibe

WELCOME TO ACAPULCO (dir Guillermo Iván) is a fun little meta, mistaken-identity crime comedy that is heavy on cliché and light on plotting. The best way that I can describe it for my fellow pop-culture nerds would be to call it the indie lovechild of SCOTT PILGRIM VS. THE WORLD and the 1991 Richard Greico classic IF LOOKS COULD KILL. There are probably better, more widely known examples of films featuring fish out of water protagonists on the run from dangerous criminal elements (NORTH BY NORTHWEST and TOTAL RECALL are other good examples.) but God damn it I have a soft spot for IF LOOKS COULD KILL so we’re going to go with that.

Matt Booth (Michael Kingsbaker) is a thin caricature of a video game designer; nerdy, feckless and annoying. He is off to present his newest game idea, a Call of Duty clone called ‘Wrath of Todd’ when he meets up with his best friend Tony (Bradley Gregg) at an airport bar. Matt gets trashed and wakes up on a plane headed to the titular city. Turns out Tony is a low-key bad dude and his devious plans are going to cause Matt a lot of hardship in the near term. Upon landing, Matt immediately runs afoul of local officials and is being hunted by everyone from criminals to the CIA. The rogues’ gallery includes the likes of Michael Madsen as a violent bounty hunter, Paul Sorvino as a corrupt senator and William Baldwin as a rogue CIA agent (whose line delivery, to my ear, sounded exactly like his brother Alec channeling Donald Trump. – And that’s not distracting at all I assure you.) A mysterious and deadly stranger comes to Matt’s aid in the form of Adriana (Ana Serradilla). And even if she actually doesn’t actually say ‘Come with me if you want to live…’ she might as well have.

I’m just scratching the surface of all of the folks quickly entering Matt’s life and if it sounds like there are too many characters in this film it’s because there are. Frankly put, trying to keep track of them all is dizzying and justifying each of their roles in the story is even harder. Por ejemplo, there’s the beautiful Miss Ryker (Jeannine Kaspar) who shares a couple scenes of intrigue with Tony and the Senator but is otherwise unimportant to the plot. There is local tough, Rafael (played by Iván himself) who chases Matt for a bit, has some back story with Adriana and a stylized streetfighter-esque bout. Why couldn’t Matt have had that fight instead? Why couldn’t some of Miss Ryker’s dialogue, scenes or backstory been given to Adriana? Either would have been way more motivated. Consider the ensemble films of Guy Ritchie (SNATCH in particular, another likely inspiration) or even the way INTO THE SPIDER-VERSE handles multiple spider-people. Every character is crucial to the plot or central themes in some way, each of them get just enough shading for the audience to register them and as soon as their usefulness to the story has run its course, the film then disengages with them. Here, it’s a simple matter of too many folks with not enough to do. Ultimately, they just jack screen time that could have been used to bolster Matt’s character, develop his arc or at least make him a little bit more likable (let’s stick a pin in that one for later.)

So Matt and Adriana spend the bulk of the film ducking and dodging their way out of danger, killing a lot of people and  unraveling the mystery of Matt’s sudden and dangerous popularity; a mysterious item known as ‘the package’.
Yes, they actually refer to it as ‘the package’ and it serves as the old school ‘macguffin’ of WELCOME TO ACAPULCO (‘the goober’ if you’re new school.) Matt is completely in the dark but all of the other characters in the film are after him over it. What’s more, all are infuriatingly vague about what it is and what it does. Every other time it is mentioned the film takes us into a fourth wall breaking segment where Matt opines on what it could possibly be. These segments are entertaining if detrimental to the pace of the film, as are most of the dozens of ‘now hold on a second’ freeze-frame liberties that Matt takes throughout.

On that note I would mention that Matt has *a lot* of voiceover lines in this film and unfortunately it doesn’t much serve the story. There are a lot of inner-thoughts that Matt’s character should be saying out loud to the other characters and a lot of meta-commentary that Matt delivers in VO that feels out of place or unnecessary. Either an obvious observation or the punchline to a joke that doesn’t land. Moreover, I question why Matt’s vo’s have this omnipotent power and why is his ‘in-movie’ self so clueless. Is he speaking from the future? The afterlife? The DVD commentary track? The film never tells us.

Getting back to Matt as the main character, I used some negative adjectives earlier in my description of him (‘nerdy’, ‘feckless’ and ‘annoying’ if you don’t feel like scrolling up…) again it feels like the film leaning into the cliché, this time of a stock video game nerd and it’s a lazy way to go about it. Subsequently, Matt is a largely unlikable. He is whiney, weak and fairly unintelligent. That’s not to say that all film protagonists should be likeable but they should have *some* outstanding and/or redeeming quality to get us interested in their story. Think of Daniel Plainview from THERE WILL BE BLOOD, a greedy, craven, hate-filled man, but charming af and whose ruthlessness is enthralling. Matt’s negative qualities don’t make him entertaining, just grating. Furthermore, his character doesn’t grow organically. Towards the end of the film after the umpteenth chase, for no apparent reason, Matt suddenly snaps into action-hero mode, guns down a bunch of assailants and concocts a sneaky scheme to upend the bad guys’ plans. Not because he has spent the film building to it, but because the movie is almost over and it’s about time that he did something. The turn feels sharp and unearned.

I’m afraid at this point in the review you might be thinking that it’s all bad, or even mostly bad. It really isn’t, just filled to the brim with standard crime comedy bromides, and if that’s your jam then you will dig this movie. It’s actually a largely fun time. I mentioned SCOTT PILGRIM at the jump because aside from it’s constant meta-commentary WELCOME TO ACAPULCO is downright drenched in the video game aesthetic. This aspect is actually a good fit for the film based on Matt’s profession even if the implementation is hit or miss. Elements like descriptive stat screens each time a new character enters the film or pixelated hearts crowding the background of a shot as Matt fantasizes about Adriana, even the aforementioned fighting game sequence complete with life bars and announcer exclamations totally work for me. However things like the ‘in-game’ footage of Wrath of Todd, where the video is just overlayed with a posterized filter, look cheap. Still, I can appreciate what the filmmakers are trying to do here.

The performances are generally good as well. Sometimes the bigger stars in these types of movies are unabashedly phoning in their lines but that isn’t so much the case here. Michael Madsen in particular does fun work. I really liked Seradilla’s no-nonsense action hero and I actually dug Kaspar’s Miss Ryker, even if I never figured out what her character was doing in this movie. Also enjoyable is Gregg’s inexplicable best friend/heel Todd, although it must be said his plan makes no sense and his various costume changes throughout the film are ridiculous. (Matt even says as much in one of his many…many asides).

The scenery of Acapulco itself is captured beautifully and all of the on-location work is lush, vibrant and a welcome change to your standard gritty city action-movie locales.
I also just really appreciate the fantasy scenario that the film sketches. A loser with a dead-end job gets dropped into a paradise and inexplicably becomes the star of his own action flick, complete with badass highlight reel moments and a beautiful and deadly lady by his side. Who among us loyal AAGG’ers doesn’t have that fantasy cooking in the back of their brain?

In that vein I do respect the itch that this movie tries to scratch even if it isn’t entirely successful in its attempt to do so. If you love any of the films I’ve mentioned in this review (Especially. Especially IF LOOKS COULD KILL – I’m seriously going to rent that right now.), can bear the copious tropes and are up to wading through a bit of a messy plot then the stylized video game aesthetic, crime fantasy and earnestly fun action of WELCOME TO ACAPULCO will ensure that you enjoy your trip. 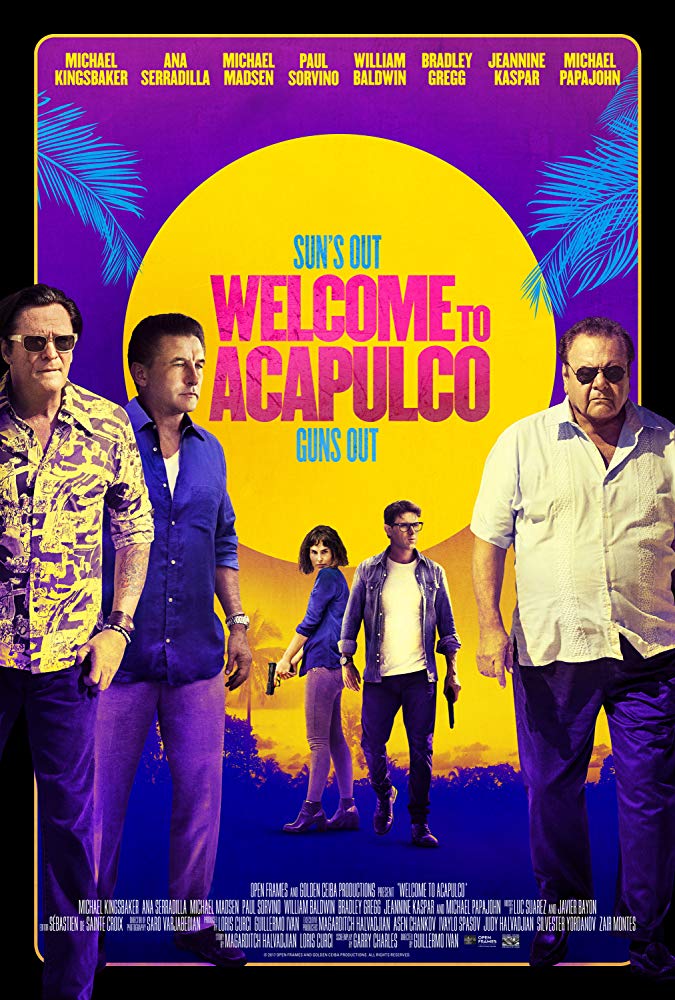