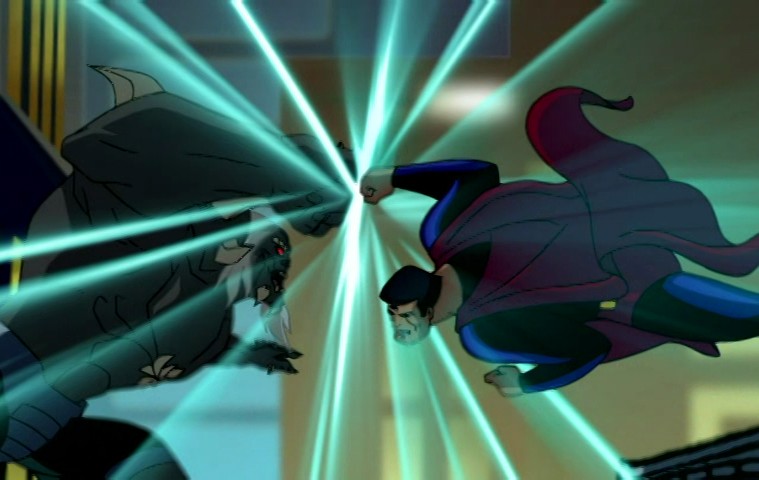 As of this writing, people are crowding clamoring for the Blu Ray of Man of Steel.  However, prior to Henry Cavill (Immortals, The Tudors) taking up the iconic cape, DC Animation hit the ground running with a new avenue to showcase the best of Superman (and other DC characters). Coming off the heels of animated success (Batman: The Animated Series, Superman: The Animated Series, Static Shock, etc.)  DC/Warner Bros. Animation took off with a standalone movie front that would not only hook older fans, but grab new eyes as well with shocking surprises, intense action, and grittiness to boot in regards to the DC Universe.   The first of this new effort since Batman: Mask of the Phantasm was Superman: Doomsday, an adaptation of the controversial and groundbreaking storyline where Superman meets his untimely demise at the hands of his ominous new foe, Doomsday.
The animation in this movie is very good.  The best of Bruce Timm’s signature character designs, Clark, Lois, and the rest of the cast are rendered well.  Those fans of The Batman: Animated Series will love the designs and set pieces across the film.  Fluid, without only a few minor spots, the animation is seemingly sleek, especially during the action scenes.  Each explosion is blazing and every punch is crackling crisp in visually and audibly.  The musical score also amps the suspense with a rich selection across the board.   The characters are portrayed sufficiently; especially Superman/Clark Kent, Lois Lane (who is elevated as the woman of action in this film) and Perry White while others like Jimmy Olsen and Lex Luthor take a few radical turns for this yarn.   However, their character changes, as well as the way this film was adapted, attempted to add a different dynamic to the fray. 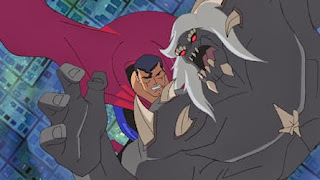 However, that dynamic twist is also prevalent in adapting this large scale story into a 78 minute feature.  There are particular elements missing to explain Doomsday’s reasons or even how he ends up on earth, which nullifies the core of this story.  Despite ringing true to the comic in terms of certain, more visceral scenes (PETA wouldn’t be happy with one scene in particular involving a Deer), the story elements are altered in the second half to a more atypical flair, making Doomsday himself an opening act rather than a main event or, as the name should put it, the whole freaking show (slight RVD reference to the wrestling fans out there).  In addition to that, logical flaws and downright bad plot holes are apparent in the simple fact Superman seems so alone in his epic.   So, a giant monster shows up, kills the most influential icon in history, and no other hero goes to the funeral?  No Batman?  No Wonder Woman? No Supergirl?  Are you serious?  The omission and outright removal of important elements such as these and the legacy front that followed after Superman’s death (very much apparent in the original source material) hurt this film, especially the absence of Papa Kent at a critical point in the feature.

These problems are compounded by mediocre voice acting.  Adam Baldwin’s mellow tone is sufficient, but not the best of the Man of Steel compared to established Superman voice Tim Daly.  Despite DC’s best efforts to make Lois Lane standout, Ann Hesch’s voice hampers all of it.  The emotional breakthrough she has in the second half with Mama Kent is the only thing successful of her voice work in this film.  Jimmy Olsen’s voice is indifferent while Perry White (Ray Wise [Reaper, 24, Robocop]) and Lex Luthor (James Marsters [Buffy, Angel, Ultimate Spider-Man]) seem to be the most effective in capturing their characters (despite a slight twist in Luthor’s character). 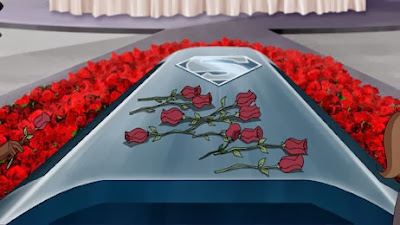 The pacing in the film is brisk to a fault.  It’s effective in aiding the first act of the film, but warps the second act.  Although a very climatic battle occurs in the second half, the exposition is flat and the movie suffers for it.   In the spirit of my previous review, majority can wait for it to show up on Netflix or check it out on the cheap.

Chis Campbell is Action A Go Go’s  resident Otaku expert and can be followed on twitter at @CAIMERMAN.