Those who read all of my previous Sequelbration! columns may be surprised at my choice of film series this week. Admittedly, The Fast and the Furious franchise isn’t exactly one that lends itself to deep thematic exploration. None the less, I believe the series, it’s last two entries, to be specific, have done something that other franchises of a similar nature have lacked the insight to do. Which is why F&F is flourishing six films in, whereas as other franchises flounder at around three.

To be honest, up until the release of Fast Five, the Fast and the Furious franchise lacked any real commendable traits. A series of films only loosely strung together in narrative, and all of them seriously lacking in the dramatic sphere. They were goofy movies about tough-talking meat heads who street race constantly and occasionally drop pseudo-philosophical wisdoms about their need for “speed”. It was occasionally fun, mostly stupid, and overall just inconsequential. Fast Five changed all of that. 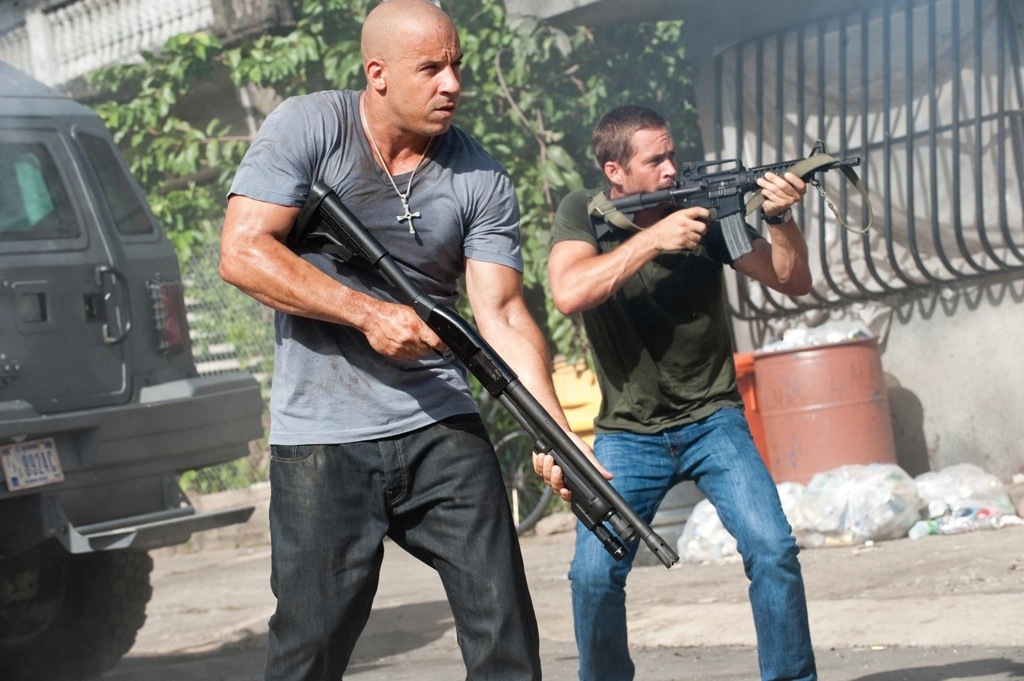 Fast Five did two very important things right. First of all, it changed the series genre. The first four films suffered from never really understanding what they were or what purpose they served. Were they dramas? Thrillers? Action films? All three? Something else? Who knows, the final results were consistently confused, their core functions as films were frustratingly nebulous for such a simple premise, trying to juggle a bunch of dramatic concepts none of them could really sustain. Fast Five gave the story elements a concrete base by definitively becoming a heist flick. A heist flick with cars, of course. Car-related robbery has long been an element tossed around in the series, but the new level of commitment to the genre gave Fast Five a focus it’s predecessors sorely lacked. This new foundational strength also made room for the addition of tongue-in-cheek humor. The freedom to laugh at itself on occasion, which gives the audience the freedom to laugh with it as opposed to at it. Franchises usually follow an opposite pattern, genre typically becomes more vague and less cohesive as time goes on. Director Justin Lin and writer Chris Morgan did the unprecedented in steering a historically under baked franchise into a franchise with focus and drive. It’s a largely overlooked accomplishment on both their parts, and they deserve some serious recognition for it.

The second crucial decision they made was tying this fifth entry back into all preceding entries. For those unfamiliar with the original F&F films, the original film starred a quartet made up of Paul Walker, Vin Diesel, Michelle Rodriguez and Jordana Brewster, as well as Matt Schulze in a supporting role. After the first film, Diesel dropped the franchise in favor of starring in xXx. And so only Walker continued into 2 Fast 2 Furious, and starred alongside Tyrese Gibson and rapper Ludacris. The third film, The Fast and the Furious: Tokyo Drift featured an all new cast, with Lucas Black playing the lead and Sung Kang in a supporting role. The film also featured a cameo appearance by Vin Diesel. The fourth film, confusingly titled Fast & Furious, reunited the original quartet along with a brief returning appearance by Sung Kang, and other brief appearances by new cast members Gal Gadot, Tego Calderon and Don Omar. 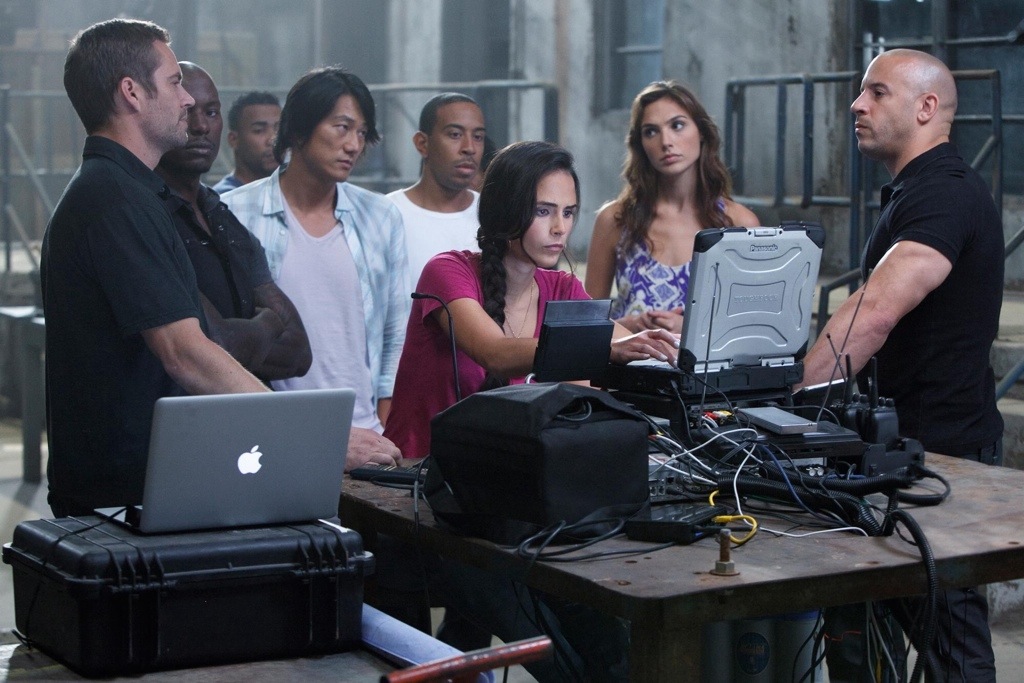 Was all that confusing? It should be. The original four films were something of a mess casting-wise. Consistency was completely out the window. As far as a fifth film goes, the simplest answer would be to pretend those first and second sequels never happened and just stick with the original stars. But that’s not what Chris Morgan and Justin Lin did. Fast Five draws heavily from every previous film in the series, bringing back not just the original four; Walker, Diesel, Brewster and Rodriguez, but also bringing back Tyrese Gibson, Ludacris, Sung Kang, Gal Gadot, Tego Calderone, Don Omar and Matt Schulze, all in starring roles. Fast Five united a previously haphazard series by making the fifth film an ensemble piece starring almost all the major players from the preceding films. By doing this it not only strongly established it’s place in the series’ canon, it also offered legitimacy to previous entries. Otherwise superfluous films like 2 Fast 2 Furious and Tokyo Drift were retroactively given a place of belonging in the series chronology. Fast Five became a uniting force for the F&F franchise, not only putting itself back onto the map, but reaffirming the franchise as a whole. It’s an unprecedented and risky move, especially considering how little people would have remembered of 2 Fast and Tokyo Drift by that point, but it’s a risk that payed off. Fast Five was a critical success and financial smash, an absolutely home run for a film series that had been largely written off from it’s very first entry.

This string of success continued into Fast & Furious 6, or, as the opening title of the movie refers to it; Furious 6. Morgan and Lin kept it fresh by shaking of the genre once again, this time turning from heists to straight up combat, like, with guns…. and cars…. duh. And though the film was less focused than Five, it still had it’s fair share of highlights. All the most beautifully over-the-top stunt work, perfectly tongue-in-cheek one liners, and a fairly intense climactic battle sequence. The best part of 6, however, comes partway into the credits. In another example of tying the franchise back into it’s preceding films, 6 not only sets up the seventh installment perfectly, but roots it in the events of Tokyo Drift. For those who haven’t seen it, I won’t ruin it for you, but it’s easily one of the most clever twists I’ve ever seen a film series pull off over multiple films, a testament to how clever the creative minds are behind a deceptively empty-headed franchise.

The fundamental thing that makes The Fast and the Furious work though, I think, is an element that has been in the series’ DNA the whole time, and only took the write story to bring it out: a heart and a soul. There’s a tangible love in these movies, both between the characters and from behind the scenes. The love was sort of drowned out in the earlier entries thanks to poor dialogue and misplaced self-seriousness, but it becomes clearer as the series goes on, and is on full display in Five and 6. There’s a sense of affection in these movies that’s very often absent from action films, both modern and old. It doesn’t take stony-faced, emotionless, hyper-masculinity to make a badass action flick, and F&F proves that. The characters in these films, the crew, are a real family. There’s a real, loving bond between them. There’s a level of emotional connection with these characters that’s rare in action cinema, even cinema as a whole. There’s a simple-minded beauty to the heart of The Fast and the Furious, it’s unashamed about its feelings and it’s affections, and those elements enhance the drama onscreen in a way that other action films can’t even touch. On it’s surface it’s all muscles and car engines, but underneath the hood is a very sweet and caring soul. It’s that soul that has sustained the franchise through six entries, and it can continue to do so, with the right creative team, for numerous films to come.

The Fast and the Furious is a great film series, even if it took awhile to blossom. It’s an exemplary testament to the fact that long-running franchises need not reboot every time things look a little messy. Sometimes the best option is judge unify your series instead of cutting bits and pieces out. Embracing everything instead of taking the easy path and starting all over. I look forward to F&F7, and I wish new director James Wan all the best. I’m a huge fan of his work and I hope his first foray into big budget action is the massive success he really deserves to have. And may Paul Walker rest in peace, he will be very sorely missed. With a film series with this much heart, I’m confident he can, and will, be properly honored.