Inspired by a recent two-day Complete Saga viewing, this week begins a series of reviews in which I will take a look back upon the entire Star Wars Saga, episode by episode. Each week I will review a different film, progressing in chronological order, with the hope of offering a new and fresh perspective on this incomparably influential series.

First up: Episode I – The Phantom Menace

George Lucas’s chronologically first entry in the Star Wars Saga is as frustratingly imperfect as it is inspirationally brilliant. Containing in equal measures some of the franchise’s greatest and worst moments, Phantom Menace is a mixed bag that manages to keep itself above sea-level through sheer inspiration and a nearly unmatched sense of wide-eyed wonder.

Phantom Menace is an interesting experiment in stakes. Where other science-fiction/fantasy films rush quickly to establish stakes of apocalyptic scale (looking at you Marvel) from the very first entry (and every entry after that), Phantom Menace is a much more patient example of its particular breed of summer blockbuster. It’s a more personal, yet grander film than it’s imitators, which establishes itself as a member of a higher, nearly uninhabited echelon of the sci-fi/fantasy genre.

It’s because of this that Menace is free to establish a narrative where, compared to other blockbusters, the stakes are relatively low. A trade disagreement leading to an invasion on a small, relatively insignificant planet in the Star Wars universe. It’s the sort of shady violation of justice that must occur multiple times aday in this unfathomable vast universe, yet, because of the personal stakes of those involved, the entirety of the galaxy may as well be at risk. No threats of global or galactic destruction need be thrown for Menace to have the motivation it needs. It’s universe is fully realized enough that even these matters of relative low galactic consequence mean everything to the narrative at hand.

It’s here that George Lucas shows his true brilliance as a storyteller. Given the opportunity to round out and fill in the blanks of the legend he established so wonderfully in the Original Trilogy, he scales back, resisting the temptation of excessive grandiosity that improved visual effects provide. This isn’t to say that his battles aren’t big and his visuals aren’t grand, they most certainly are, but never unnecessarily so. Lucas resists the urge to outdo his previous works, opting instead to reinforce their story in every way feasible. This, for lack of a better term, “humility” allows Menace to simply plant a seed that will later sprout and bloom into the tale that ultimately bears its fully ripened fruit in Return of the Jedi. There’s a consistency with its predecessors that’s unique and impressive about Episode I. In the order that we chose to watch the films (IV, V, I, II, III, VI), the jump from Empire Strikes Back to Phantom Menace doesn’t feel clunky or disjointed, the tone and look between the two films is actually remarkably similar.

Phantom Menace is only a piece of a much larger puzzle, and it’s clear that the man behind the camera knows this and has every intent to keep it that way. It’s proof that not every building block in a structure needs to be better than the last, and the stones at the bottom need to be sturdy rather than flashy. Star Wars is and has always been a big picture series. The minutia of each film is less important than the picture painted by the whole. Lucas, in writing this film, repeatedly risks alienating his audience by choosing to initiate his plans for long-term payoff rather than make Episode I a wholly satisfying narrative in and of itself. Sacrificing immediate total payoff for the sake of strengthening the whole of the series. It’s a smart move. The value of Wars is in the sum of all of its parts, each singular piece would be lost without its companions. In a way, humility is Lucas’s form of ambition in Menace, it’s strength is it’s contentedness in it’s given role. 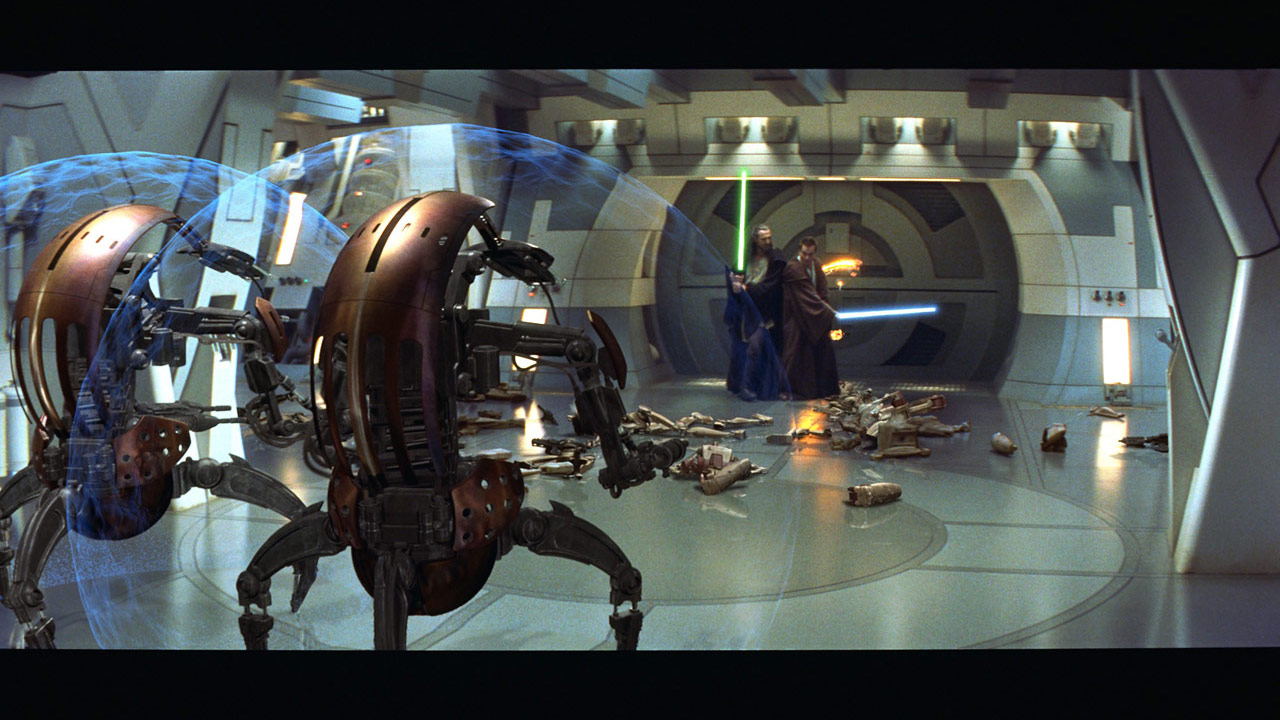 This particular breed of ambition, however, simultaneously proves to be the film’s biggest issue. Lucas’s pointed focus on the series’ grand scale does ultimately open the floodgates for pacing issues and over-expository dialogue. The lead in to the final act in particular, while vital to the overarching story, slows the action of the narrative down to a grinding halt. The film meanders and pauses on moments of less than immediate importance, and for viewers uninvested in the series as whole, this could prove to be fatal. In many ways, The Phantom Menace suffers in manners similar to most television pilots. Like a TV pilot, Episode I is tasked with the challenge of hooking viewers while being entertaining enough in its own right, and, like a TV pilot, it’s very much a “take it or leave it” sort of experience. As I stated before, it succeeds as a good pilot should, in setting up the series to come. Where it may fail, depending on the viewer, is whether or not it’s enjoyable and compelling enough as a singular experience for audiences to get to the second episode. While the audience I watched with seemed satisfied with Menace (even going so far as to select it as their favorite of the series so far, as we had watched episodes IV and V already), this will not necessarily be the case with all first-time audiences. Episode I makes little to no attempt to explain the universe it takes place in before the story proceeds upon it’s merry way. While the world is clearly fully realized and dimensional, the lack of set up or explaination (aside from the mandatory opening crawl) for the cultures, organizations and context may result in confusion and alienation for first time audiences, particularly if the series is viewed in chronological, rather than release or Machete, order.

If there is one most vital element to a Star Wars film, it’s a sense of wonder. In this regard alone, Phantom Menace climbs above both it’s predecessors and it’s successors. There’s a unique sensibility of awe-inspiring scope and drama innate in Star Wars, Phantom Menace in particular. The sequences of pod-racers flying at lightning speeds across the deserts of Tatooine, the shots of endless city-scape of Corscuant, the beginning images of the final, fateful duel between Darth Maul, Obi-Wan Kenobi and Qui-Gon Jinn. It’s a sense of dramatic majesty created when the perfect balance of fantastical absurdity and complete sincerity is struck. To this day, the Star Wars films are the only set of films I have seen that have truly accomplished this in this manner. The Phantom Menace is one of the purest expressions of imaginative power ever put onscreen. It’s the stuff of a child’s dreams, dreams of adventure dripping with universe-shaking significance. It’s an epic with a spirit of vibrant youthfulness, an energy that the many flaws of the film can’t manage to actually snuff out. A work of deeply imperfect brilliance, one that will capture the imagination of youth for generations to come, as it did my own. The Force is with Mr. George Lucas, Midichlorians and all. 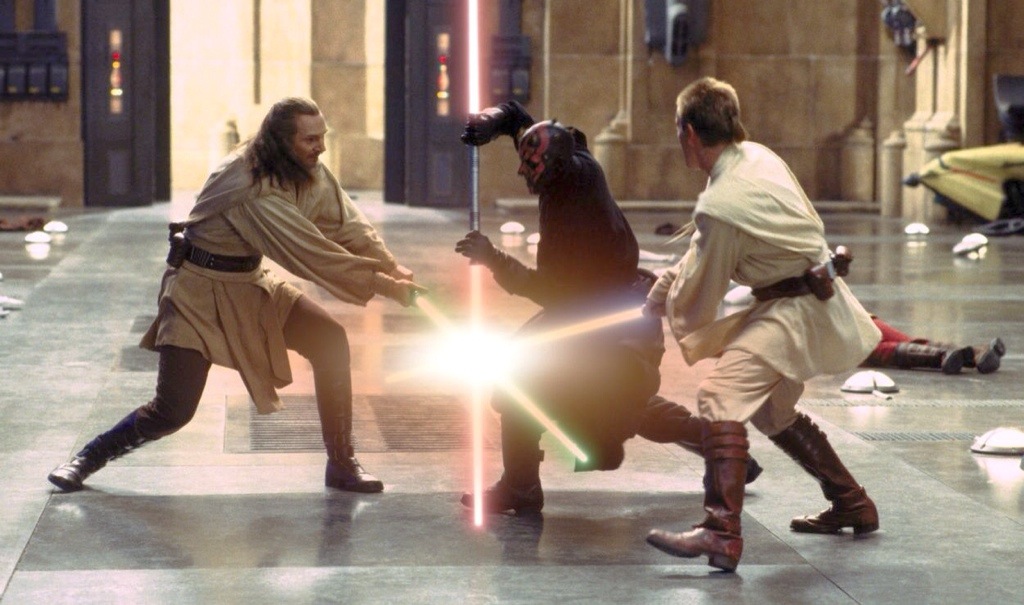