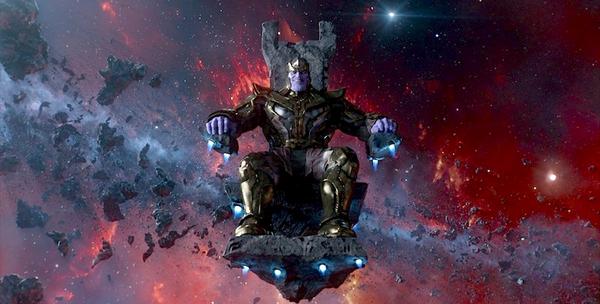 UPDATE: Marvel Gives Us Our First Look At Thanos With The Infinity Gauntlet And Twitter Goes Nuclear (Full Gallery)!

UPDATE: Someone was kind enough to post the full video of that Thanos clip from yesterday’s event. It’s a short one but still…pretty cool.

On the afternoon of October 28, 2014, Marvel Studios finally unveiled their full slate of mystery movies for Phase 3. As some had already speculated, there were some familiar names on the line-up…

However, there were also a few new ones (at least, new to those not familiar with the comics)…

For some concerned citizens however, Marvel Studios has been needing to do more in terms of diversity. It seems like the company listened. Answering prayers by revealing official titles and release dates for two solo superhero films that potentially could solve that problem…

I long suspected that Feige and friends were planning to do a Black Panther and Captain Marvel film in Phase 3. I’m just happy that they went with Chadwick Boseman as Panther over some of the stranger suggestions online.

As for Captain Marvel, time will tell if this is going to be the newer  female version (Carol Danvers) or the classic male version (Mar-Vell). Personally, I’m kind of banking on it being a little bit of both.

Then, of course, there were was this…

Admittedly, more than anything, I’m excited for two Joss Whedon films featuring Thanos and the Infinity Gauntlet (I’m assuming Whedon and Thanos are part of both). Is it a greedy cash-grab move on Disney/Marvel’s part? Sure. But I would’ve ended up seeing all these movies anyway. Who cares? Just make mine Marvel. Apparently, I’m not alone…

DC comics needs to just stick to the CW, for real.

Oh, Marvel. Getting me all excited again you abusive monsters.

Has anyone checked on DC and Warner Bros.? Are they OK? There are hotlines they can call. #MarvelEvent

I blink and Marvel just destroys Hollywood for the next several years. — Troy-Jeffrey Allen (@BamnComics) October 28, 2014

Okay. That last one was me.