Netflixing Under the Influence: Is STARCRASH Awesomely Terrible Or Just Plain Terrible?

Starcrash is one of several Star Wars rip-offs that popped up after the massive success of that obviously record-breaking hit.  I tend to enjoy the spectacular ineptitude of Luigi Cozzi and had heard this one was a pretty big failure in nearly all aspects of filmmaking.  But even more than that, check out this cast!  Caroline Munro, Joe Spinell, Christopher Plummer, and David Hasselhoff!  Talk about eclectic.

I was actually still hungover on this, the morning after my 30th birthday.  However, in spirit of the “under the influence” aspect of this feature I was able to choke back a few Coney Island Mermaid Pilsners.  I tend to enjoy this beer.  It has some tart but earthy notes with a very light caramel finish.

Our tale starts as the crew of a spaceship is attacked by a huge mass of red blobs.  The blobs are somehow both inside and outside the ship at the same time and everyone starts screaming despite there being no signs of physical trauma.   Cue the credits. 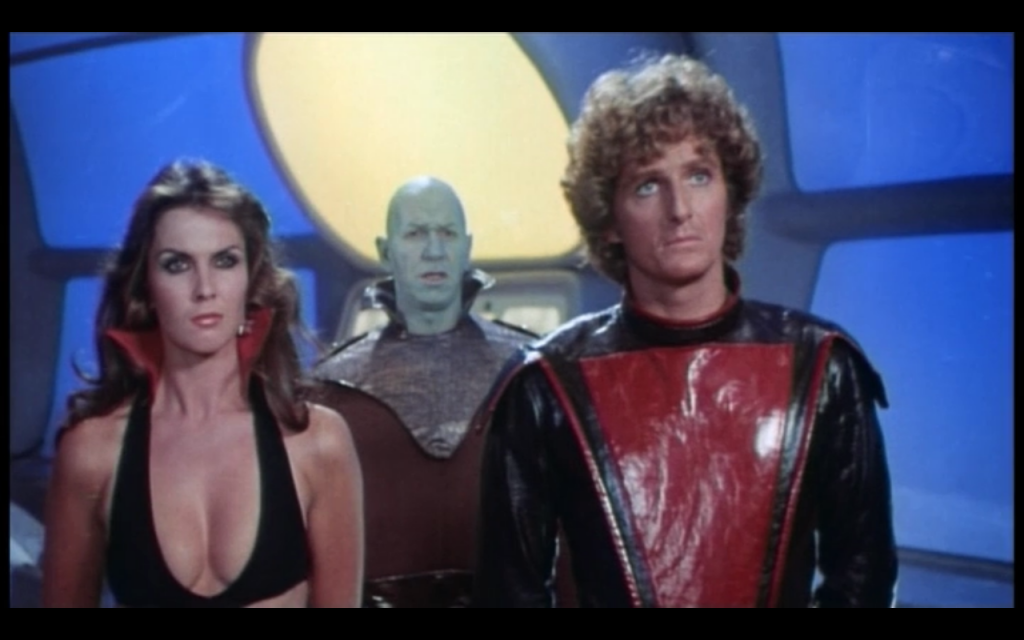 Sultry human Stella Star (Caroline Munro) and humanoid alien Akton (Marjoe Gortner) are smugglers on the run from space cops when they stumble across an escape pod ejected from the ship in the opening scene.  They rescue a single survivor but are arrested anyway and Starr is sentenced to hard labor on a penal colony planet.  It’s a needless sequence, since the next scene is of her escaping, only to be picked up by the same police officers who captured her in the first place.

Now… one of the more challenging writing exercises around is to recount some terrible science fiction or fantasy plot while making even a modicum of sense and without sounding like a total idiot.  This is even more true when the screenwriters and actors themselves can’t seem to do it either.  But here goes:

The Emperor of the Galaxy (Oscar Winner Christopher freakin’ Plummer) shows up in hologram form to explain that the ongoing war with the forces of the evil Count Zarth Arn (Joe Spinell) is approaching terrifying heights.  It seems that the count is now in the possession of a secret weapon of mass destruction that will guarantee his victory.  This weapon is what produced those nondescript red blobs from earlier.  As a result, the Emperor wants to stay the sentences of Stella Star and Akton in order to employ them to find three additional escape pods, as well as hunt down the weapon.  So they join forces with the same cops that arrested them (a green alien named Thor and a robot with a Southern accent named Elle) in order to find the missing pods. 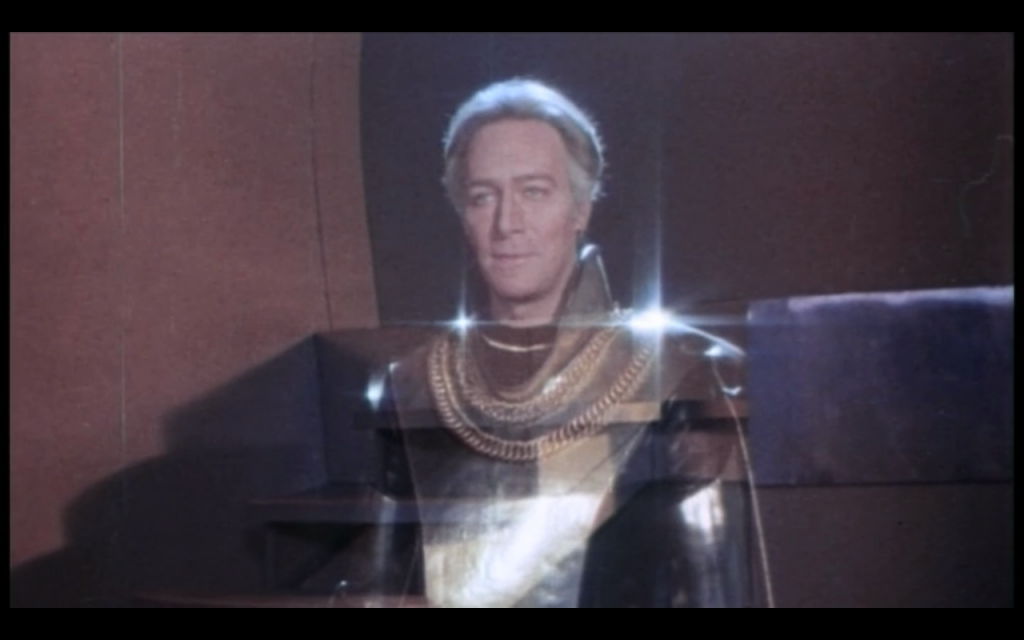 Akton uses his frustratingly vague superpowers (more on that later) to calculate the locations of the escape pods.  The first is on a planet of scantily clad Amazon women (of course).  Elle and Stella get captured, get into some fights, and escape.  The second location is a barren ice planet.  Elle and Stella go down to the surface again while Akton and Thor stay in the comfort of the warm spaceship.  It is here that Thor double-crosses them due to his loyalty to Count Zarth Arn.  He “kills” Akton by hitting him on the head with a microscope and strands Elle and Stella out on the frozen tundra.  However, Akton wakes up and it turns out he’s super strong, bulletproof, clairvoyant, and can thaw out Stella after she freezes!  One notable, less useful power is that he can make weird light shows with his hands… because science.  Stella also affectionately remarks that he’s “the most human-like friend” she’s “ever had”, whatever that means. 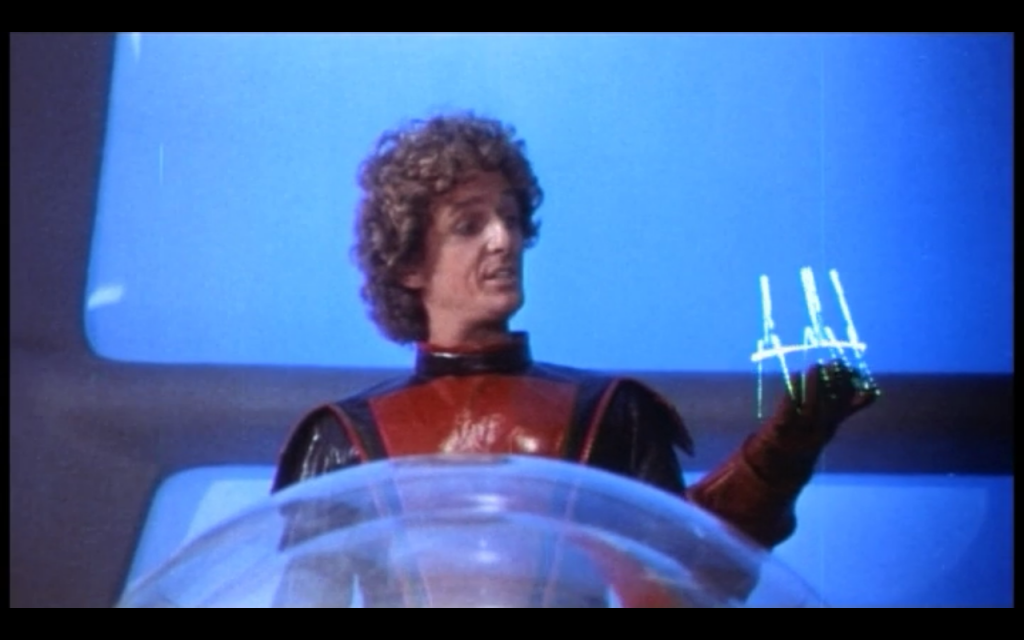 Before they arrive at the third planet, they’re attacked by those game-changing red blob monsters and survive because of Akton’s space magic.  Which immediately undercuts the stake and danger of Zarth Arn’s “ultimate weapon”.  Finally they get to the planet holding the third pod, Stella and Elle go down while, again, the all-powerful Akton kicks back in the ship.  Elle gets destroyed by cavemen and things aren’t looking too hot for Stella until David Hasselhoff (the Prince of the Galaxy) saves her with his feathered hair and dreamy eyeliner.  The two of them also find themselves in trouble but Akton comes down and saves the day, of course.  Seriously though… Stella experiences a small-scale deus ex machina roughly every 4 minutes in this movie.  It is only about halfway through and we have already had Stella rescued by Thor and Elle from the prison, Stella rescued by Elle from the Amazons, Stella and Elle rescued by Akton from the giant Amazonian robot, Stella and Elle rescued from the ice planet by Akton, Stella rescued from cavemen by David Hasselhoff, and Stella and the Hoff rescued from the cavemen by Akton. 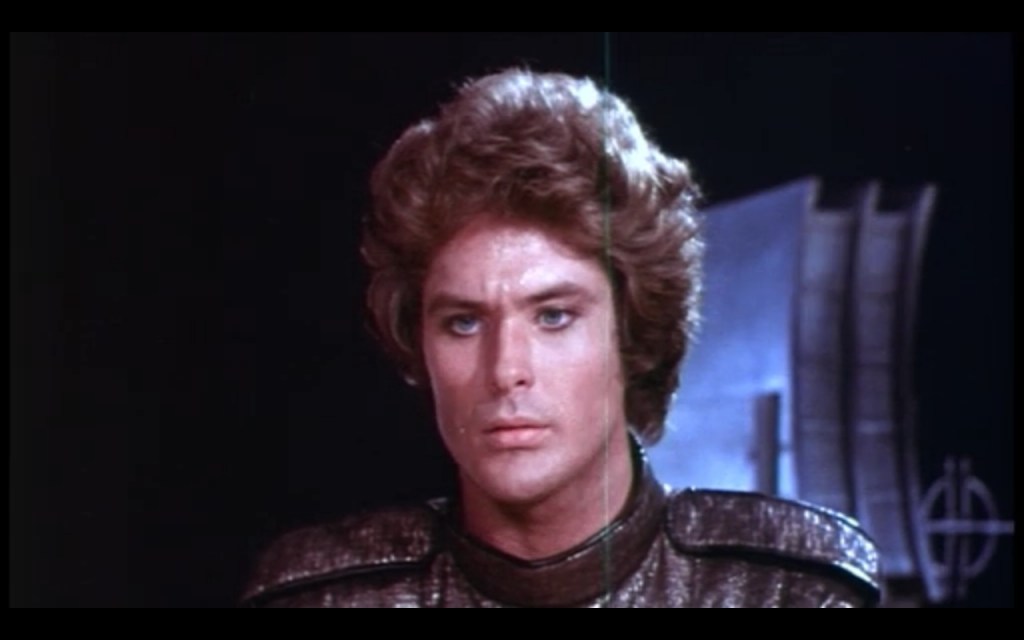 Coincidentally, the secret weapon also happens to be stored on the planet they found the third escape pod.  Count Zarth Arn explains that he wanted them to find the weapon because he has the planet rigged with nuclear explosions and is planning on blowing up the planet when the Emperor comes.   Ok, so hear me out.  He has this super weapon that will supposedly win him the war, but he’s simply using it as bait so he can assassinate the Emperor, effectively blowing it up and an entire planet in the process.  That is comically convoluted.  Why doesn’t he use the red blobs on the emperor’s ship when it shows up instead of just bouncing and blowing up the planet?  If he has the ability to blow up a planet, why does anyone even consider the red blob monsters that drive people crazy his “ultimate” weapon?  Regardless,  Zarth Arn leaves and sics some robots on them who inexplicably kill Akton (baby?).  It’s inexplicable because when Stella says, “But you can heal yourself!” He replies with, “No, it’s my destiny!”  Which is about as vague as you can get.  Hilariously enough, Stella Star is even confused by the very concept of mortality when she says “I don’t understand, you never die!” 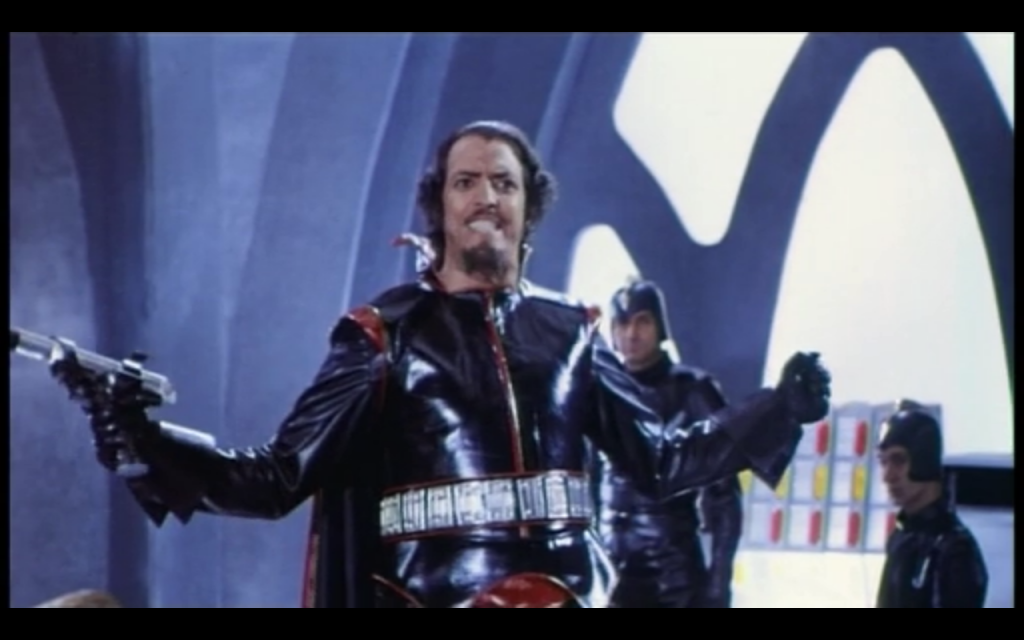 The Emperor shows up with 48 seconds left on the time bomb but mentions “I wouldn’t be emperor if I didn’t have some powers at my command” then shouts “Imperial battleship, halt the flow of time!”  He freezes time for 3 minutes and they’re able to casually stroll out from the underground laboratory and steer clear of the explosion in time.  He explains that it will “immobilize every molecule on the planet”, but not how it doesn’t do the same to any of the people.

So they escape, but the movie still isn’t over and it gets even more insane.  Zarth Arn is holed up in his space station shaped like a giant hand and the Emperor’s forces are approaching with in their battleship.  This is where the good guys decide to storm the gates with the dumbest attack imaginable… by shooting giant gold vibrators filled with armed forces through the hand-ship’s “windows”.  You may ask why a starship has windows or why nobody gets sucked out when the windows break or why they put people inside the torpedoes instead of, you know, exploding torpedo stuff (I don’t know much about weapon technology).  Like most of these movies I’ve been watching, anyone asking those questions is putting in significantly more thought than anyone involved in the silly sci-fi movie.

The foolproof plan of shooting people through spaceship windows fails somehow, so their next plan is the titular “starcrash”.  That oddly named maneuver just means that they’re going to ram the ship with another ship.  Stella Star (and a rebuilt Elle, because they’re the suicide mission duo) does just that and ejects at the last moment so the forces of good can win.  The filmmakers choose to show literally 64 seconds of close-up shots of a model space station exploding and then Stella marries The Hoff.  The end.

I’ve mentioned before how easy it is to appreciate Caroline Munro’s assets and Starcrash makes a point to put her in some uncomfortably skimpy prison wear.  But at risk of sounding repetitive and creepy, I will instead go for the humorously stilted performances as the highlights of the film. 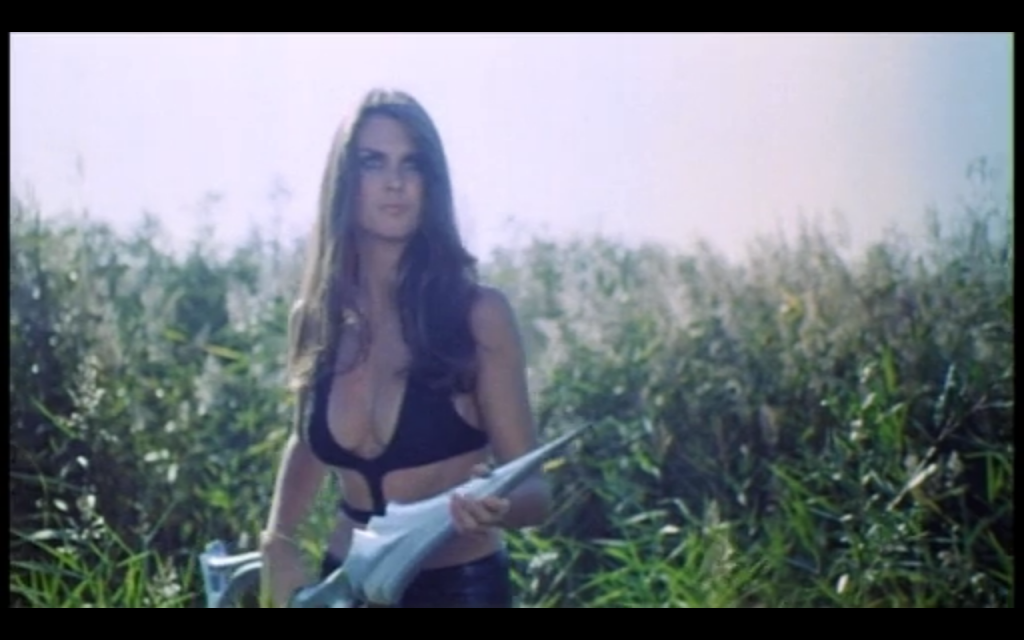 In addition to the terrible lines regarding death and “human-like friends” I’d mentioned from Munro’s character, nearly all of the actors, including her, are badly dubbed, despite the fact they are mostly English speakers.  Ultimately the performances are full of awkward pauses, inappropriate deliveries, hilariously overdescriptive and/or repetitive dialogue, and a tonal mish-mash of nonsensical jargon.

Akton: It’s here on the third planet of the next solar system.
Stella Starr: I’ve never been there. (Beat, Beat, Beat, Beat) What’s it like?

(Seriously though… it was a 4 second pause)

Elric: A floating spaceship is about to crash into us!

Zarth Arn: What?!  Zoltan, destroy the floating spaceship approaching us!

Stella Starr: So you see into the future.  All these years you never told me.  Think of the trouble I might have avoided.

Akton (nonchalantly): You would have tried to change the future.  Which is against the law.  So therefore, I can tell you nothing. (Beat) Let’s go find the third launch!

David Hasselhoff: All these power modules… what are they for?

Akton: This is the force that projected the red monsters into space.

Stella Starr: Then this is the way they produced real monsters?

Akton: No, not real.  The monsters never existed.  These machines discharged mental projections into our brains.  This is the control panel.

I could seriously go on.  The movie is pretty hilarious. 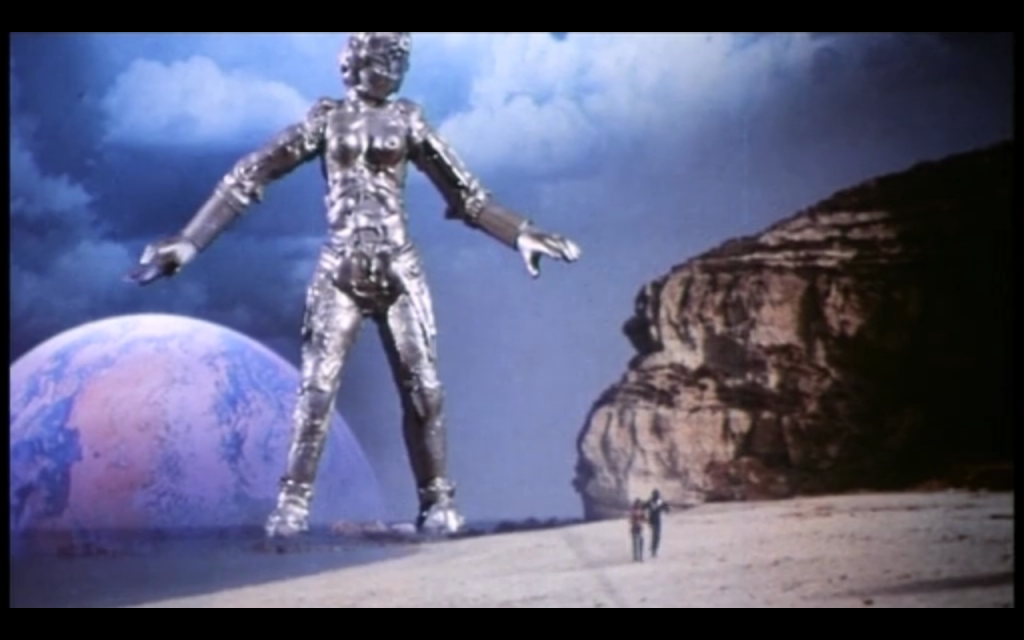 The special effects are laughably terrible, but not in the fun way the screenplay is laughably terrible.  The stop-motion animation used in the case of some robotic golems and a giant, naked animatron is some of the worst of the artform.  It’s the type of stuff that makes Cozzi’s work on Hercules and The Adventures of Hercules look like Ray Harryhausen in comparison.  The jerky movements and poorly matched composited film stock is a complete mess.  The robot lady doesn’t even move her joints when she walks.  On top of that, this movie was two years removed from Star Wars and fairly simple optical effects like lasers and lightsabers (yup, lightsabers… told you it was a rip-off) look ridiculously amateurish.  The spaceship miniatures and over-stuffed starscapes are poorly thought out as well.  At several points you can see strings holding up the ships while planets are scaled at roughly the same size as most of the spacecraft.

The jury’s still out.  I kind of hated it, but then when I rewatched scenes to finish this write-up I laughed out loud several times.  Feel free to give it a whirl, but don’t watch alone.  My fianceè was sitting next to me while doing some work and would look up occasionally to laugh and say, “Jeez, this movie is epically bad, huh?”  You actually have to actively point out the lapses in logic and odd dialogue choices, instead of the more typically passive experience of reflexively laughing at a b-movie dud.  Starcrash is just so strange, convoluted, and idiotic that the jokes are much deeper than most terrible films.

Although, Christopher Plummer shouting “Imperial battleship, halt the flow of time!” will get anyone chuckling.