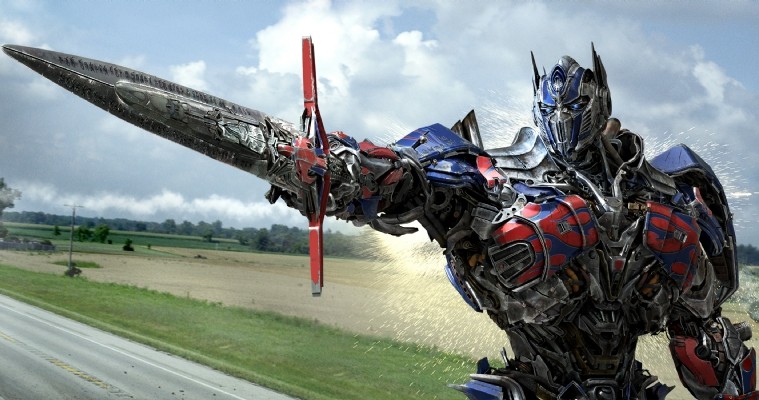 I remember my days as a young boy, clutching my beloved Transformers toys as I made my way to school. Myself and my school friends would put on Transformer battles during our 45 minute recess. The fun we had was epic. Those toys brought me a lot of joy. So fast forward to 2007… Michael Bay – the man I long consider to be the greatest action movie director and producer of all time – bringing my favorite toys of all time to the big screen. Four times. With Steven Spielberg – the director of ‘Jurassic Park’ and ‘The Lost World: Jurassic Park’ (and countless other masterpieces), my favorite movies of all time. It’s a dream even I never dared to dream. But it happened. Three “All-times” together in one franchise. And it rocked. Every time. From ‘Transformers’ all the way to ‘Transformers: Age Of Extinction’, Bay has made me feel like a little kid again.

Although there was a classic animated TV show, and an animated movie, there had never been an attempt at bring the Transformers to live action. But Bay and Spielberg, being absolute visionaries and brimming with adventure and thrills, got the ball rolling with DreamWorks and Paramount Pictures. Utilizing the best of the Transformers universe, mixed with their own brand of excitement, the two legends overcame some major hurtles to get all of these movies to the screen. But with massive budgets, terrific casts and a beloved franchise to rely on, they could never fail.

With ‘Transformers’ hitting screens in 2007, the world was re-introduced to those classic Hasbro toys with a bone-crunching action smash, a movie so huge if it had an ego it would be named Donald Trump. Made on a budget of $150 million, this first movie of the series went on to gross over $700 million worldwide, making it one of the most successful movies ever made. And the following movies would make even more at the box office.

Starring Shia LaBeouf as Sam Witwicky, a high school kid, ‘Transformers’ is the ultimate tale of the bond between a boy and his car. With a crush on the hottest girl in school, Mikaela (Megan Fox, who just happens to be one of the hottest people on the planet!), Sam sets out to impress her by getting his first car. But it’s no ordinary car. It’s actually a robotic alien, named Bumblebee, from a extinct planet called Cybertron. And Bumblebee has friends… The Autobots! A race of warriors, led by the iconic Optimus Prime, from Cybetron who battle the villainous Decepticons, who also hail from Cybertron. With Earth in danger, as the Decepticons seek out a device that will bring life to every machine in the world, and bring back their dastardly comrade, Megatron, Sam, Mikaela and the Autobots team up to save mankind from the true ‘Rise Of The Machines’.

Although on paper, it all sounds silly, it actually worked beautifully on screen. While it is crazy, and very silly, it is spectacular, it is hilarious, and it is one of the great blockbusters of our time. Where ‘Transformers’ wins is the skills of Michael Bay as an action movie director, as he helms his biggest movie to date. The action sequences are incredible, some of the greatest ever put to film. From the action-packed opening scene, right through to the fantastic desert attack on a group of soldiers, all the way to the awesome finale with the good guys taking on the bad, as the city is ripped apart in a hail of bombs and steel, ‘Transformers’ is movie heaven. LaBeouf is terrific as the leading young man, Megan Fox is glorious and gorgeous in her first major movie role, and the supporting cast including Josh Duhamel, Jon Turturro, Jon Voight and Rachel Taylor (Another absolute stunner of a woman!) are all brilliant. And topped off with an epic soundtrack from Steve Jablonsky and rock royalty Limp Bizkit (And a whole host of other rock stars), this is the movie that has it all. Near a decade on, it’s still so incredible to watch.

Michael Bay, by now, has proven his skills in every field of action cinema, and with his second sequel, it was time to get super fancy. ‘Transformers: Revenge Of The Fallen’ collects together every movie Bay made before, and stirs them all together in one big explosion-fest. With bigger action, bigger effects and bigger story than even the first ‘Transformers’, ‘Revenge Of The Fallen’ is a masterclass in action.

With Sam (LaBeouf) and Mikalea (Fox) now an item, it’s time for them to hit college. But with Sam leaving, he also must leave behind Bumblebee. But when a new Decepticon danger strikes the planet, Sam’s college stay turns into a nightmare, as once again he must save the world, with the help of the Autobots and Mikalea. This time, the Decepticons, now armed with Megatron, set out to destroy Optimus Prime and the Autobots, to make way for their leader’s return. The “Fallen”, who is intent on destroying our world and mankind.

‘Transformers: Revenge Of The Fallen’ proved to be an even bigger hit, as with a $200 million budget, it went on to create a box office take of over $830. And while it opened to far less praising reviews, it showed once and for all that the ‘Transformers’ franchise had some serious legs at the cinema. While even I would admit that the story has some minor failings (Introducing Sam back into the action by merely having a piece of the AllSpark left behind on a shirt seems lazy), I loved this movie even more than the first. More locations, more action, more effects, and more Megan Fox. You just gotta love more of everything, right? With all of the previous cast returning, except for Rachel Taylor and Anthony Anderson. and the magical combo of Bay and Spielberg, ‘Revenge Of The Fallen’ is one hell of an awesome movie.

But as a franchise grows, so must each entry. And holy cow, ‘Transformers: Dark Of The Moon’ trampled on the two previous movies. Although made on a slightly lesser budget of ‘Transformers: Revenge Of The Fallen’, you would never think it. ‘Dark Of The Moon’ is beyond mighty. I have to jump straight to the action sequences. OMG! That finale will live in my dreams forever. One hour of total chaos and anarchy. Incredible special effects, death-defying stunts and excitement that is almost unbearable at times.

This time, the Decepticons, now completely united, have come together in an attempt to bring back their destroyed planet, Cyberton. But to do so, they plan on using planet Earth as the foundation, as they retrieve the lost “Pillars” from our moon, devices that when joined together will create a bridge between our world and the remains of theirs, to newly create Cybertron, and enslave any surviving human beings. With Sam and the Autobots back in action once again, they fight to save mankind and defeat the Decepticons once and for all. Sadly, now without Mikaela, as Sam has moved on with a new woman in his life, Carly (Played by the stunning Rosie Huntington-Whiteley).

Saddened as I was to learn than Megan Fox would not feature this time around, due to a falling out with director Michael Bay, ‘Transformers: Dark Of The Moon’ is by far my favorite of this first trilogy of movies. Far bigger, far greater and far more spectacular than even the first two movies put together. 2 hours and 40 minutes of absolute joy. And it showed at the box office, as it became the first of the series to make over $1 billion at the worldwide box office. And while I do miss Megan greatly, Rosie is at least beautiful, even if she has none of the presence Megan has. And thankfully Mr. Bay and the Fox herself seem to have made up, as they continue working together on the new ‘Teenage Mutant Ninja Turtles’ franchise. And to make up for no Megan… A terrific voice performance from the wonderful and greatly missed icon Leonard Nimoy, who voices the mysterious Sentinel Prime.

However, by now, I figure that every time Michael Bay unleashes a new movie to this franchise, he is going to do his very best to outdo his past works. So it’s only fair to assume that he will do the same with ‘Transformers: Age Of Extinction’, yes? Oh yes. Oh absolutely. With the 4th movie hitting 3 years after ‘Dark Of The Moon’, everyone involved felt it was time to move on from Sam Witwicky and his family. So, as is the norm with rebooting a franchise, the human cast have been completely replaced. With Shia LaBeouf out, a new leading man was cast. Mark Wahlberg. After working together on ‘Pain And Gain’ (Which I’ll review very soon), Bay and Wahlberg struck up a great working relationship, and Marky Marky bagged himself the leading bill for the latest entry in the huge franchise. And with the new lead star comes a whole new batch of characters, including roles for the young Irish superstar Jack Reynor (Best known for his performance in the hugely popular ‘What Richard Did’, directed by one of Ireland’s top filmmakers, Lenny Abrahamson… ‘What Richard Did’ got Reynor the role after Bay saw the movie and loved it!) and Nicola Peltz. Also added are Kelsey Grammar and Stanley Tucci. Tucci’s performance is a major highlight for me, he’s wonderful in it.

‘Transformers: Age Of Extinction’, with its all new cast, now pits the Autobots against the Decepticons in their biggest battle yet, as the Decepticons have found a new weapon capable of destroying the entire world… The “Seed”, a weapon that was responsible for wiping out the dinosaur race, and can be used again to turn the human population into the very substance the Transformers are made from… Metal. With Cade (Wahlberg), Tessa (Peltz) and Shane (Reynor) along for the most dangerous mission of all, the Autobots are ready for the fight of their life, as they fight against their extinction, and call on the help of some very special guests… The Dinobots!

With a brilliant new cast, a fantastic new story (The best plot since the first of the franchise) and a budget so huge that no one knows even now how much it cost, ‘Transformers: Age Of Extinction’ is glorious. Although I’m a fan of the whole franchise, this 4th movie is the clear winner for me, standing as one of my favorite movies. Magnificent action, fantastic humor and the whole new clan of characters just make it a joy. And the Dinobots just top it off for me, at last they make their appearance in the movies, and they were worth waiting for, they’re wonderful. The action is off the chain. It’s the movie I would have always loved to make. The definitive popcorn movie.

I’m a massive fan of the ‘Transformers’ series, I have nothing but adoration for them, and they stand above most other action movies for me. I have my fingers tightly crossed for Michael Bay’s return when ‘Transformers 5’ comes around. No one else could ever replace him on these movies. And no one should be allowed.

Check back soon for the last review in this look back at 20 years of Michael Bay’s action blockbuster history, as we hit ‘Pain And Gain, starring Mark Wahlberg and Dwayne ‘The Rock’ Johnson.