Virtually in any comic book series, there’s bound to be some kind of a battle. Be it a gunfight, a good ol’ fashioned fist-fight, or just super-powered opponents tearing both each other and their surroundings apart, the writers and artists sometimes give fans the kind of battle that has them saying “DAYUM!” and talking about it for years to come. From the 1980’s to now, the X-Men titles have had several of those moments. Plenty of the characters within that universe have had moments of bad-assery in which they humiliated their opponents and surprised the readers. Here’s my top 5 fights in the X-Titles where the opponent is beaten, knows it, and the reader can’t help but to tip their hat to the characters and the creative teams behind them. 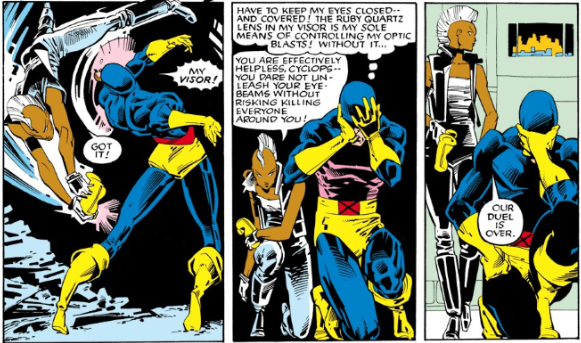 With Professor Xavier lost in space with the Starjammers and Magneto entrusted to running Xavier’s school, Scott Summers was caught between two worlds. He wanted to remain with the X-Men and be the leader, but his wife, Madelyne, wanted him to leave the team and be with their newborn son, Nathan (the baby who grew up to become the mutant soldier called Cable). This is where Chris Claremont began the trend in the 80’s of making the character of Cyclops unlikable. Being an costumed super-hero is all he’s ever known and couldn’t bear a life apart from that. He even left his wife and son behind to rejoin a team and be with the woman he truly loves, Jean Grey. Nevermind the fact that Madelyne warned him not to come back if he left, even Jean berated him for his decision. But anyway, Scott had originally left the team after the events of the Dark Phoenix Saga, leaving Storm in command of the team. When Scott returned sometime later, he was itching for the top spot, especially after Ororo was rendered powerless and adopted a punk-rock look. Shortly after the birth of their son, Scott and Madelyne argued about what’s more important to him, his family or the X-Men. Storm stepped in and offered Cyclops a duel in the Danger Room. With the Danger Room programmed to simulate an environment to put them both on even ground, they went at it. With the X-Men and the New Mutants as spectators (Wolverine placing bets for Storm to win was hilarious), the fight went up and down until Storm grabbed Cyclops visor from off his face, effectively putting him in checkmate and forcing him to leave the team dejected. What made this one a classic battle is that Storm beat Scott without her powers. That had to be humiliating for the first X-Man. I’m going to ignore the retcon that came three years later that Madelyne telepathically influenced Scott to lose. Because in this moment, the powerless weather-witch got the drop on the one-eyed monster.

Throughout 1997, this was a fight that was talked about every time I went into a comic book store. Sam Guthrie, the first New Mutant-turned X-Man called Cannonball, gets attacked by the leader of the Shi’Ar Imperial Guard named Gladiator. In a department store. On Christmas. He comes to Earth seeking the X-Men’s assistance, but ends up starting a fight with one of their members instead. Now Sam had been feeling somewhat insecure as a recent X-Man. He had trouble with his powers in his early days, but grew into a mature young man under the tutelage of Xavier, Magneto and Cable. He learned to manipulate his powers in different ways since and this issue is where he tried a knew trick that’s been often imitated, but never duplicated to this extent. Gladiator is basically Superman and delivered his most powerful blow onto Cannonball. So what happened? Cannonball absorbed the kinetic energy from Gladiator’s punch, redirected into his force field, then gave it right back to him….ten-fold. In the words of Chris Tucker, Gladiator “got knocked the f#&$ out!” Gladiator’s abilities are partially due to his confidence. After being defeated by a Kentucky corn pone, let’s just say that it left him shook for quite a long while. 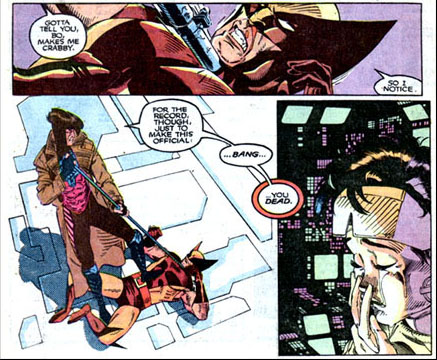 This issue served as an epilogue to the X-Tinction Agenda crossover and the X-Teams were in some serious need for decompression. Some relaxed, some argued, others fought. Wolverine decided to take his aggression out on Gambit who, at the time, was the most recent member accepted on the team. Naturally, Logan didn’t trust the mysterious Cajun and wanted to test his mettle in the Danger Room. What’s interesting is that every time Wolverine challenges another X-Man to a fight in the Danger Room, he loses. But this is the first time it happened and was unprecedented at the time. Claremont gives both men some interesting banter during the sparring, with Golden creating long shots showcasing the agility and movement of both characters. A running sub-plot at the time was that Logan’s mutant healing factor was scrambled, but that was shortly dropped. Off-panel before the fight, Gambit added a simulation of Wolverine’s enemy, Lady Deathstrike, to surprise him. Yeah, he kinda cheated, but it showed that the character learns about those around him while keeping himself enigmatic. His gambit (no pun intended) worked though, distracting Wolverine long enough to best him with his trademark bo staff and deliver a frequent Claremontism declaring him the winner: “Bang…you dead”. Jubilee was watching the sequence from the booth and was in tears at Wolverine’s loss. A Canadian beast who knows nearly every fighting style known to man got beat by younger, smart-aleck Cajun who can actually back up his gumption. Priceless. 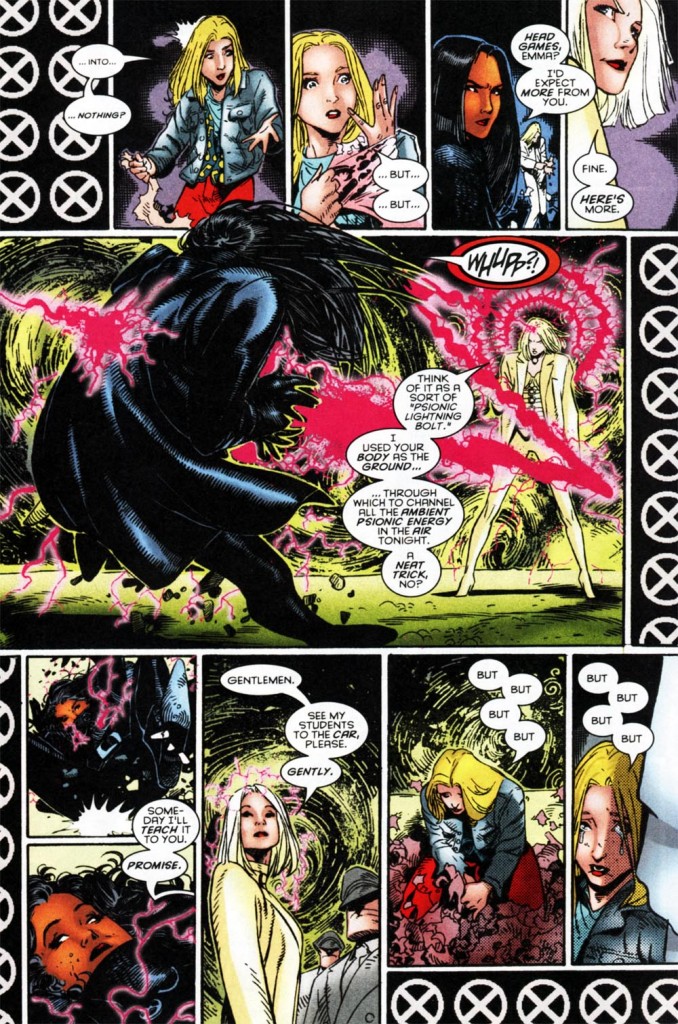 Let me be clear: Emma Frost is written as a total bitch, but she’s no bitch. By that, I mean she ain’t no punk. The former White Queen of the Hellfire Club’s Inner Circle comes off as an icily acerbic, knowledgeable, master telepath, but she has a good heart nonetheless. And she uses her telepathy with almost sadistic precision. In this issue, her telepathy made her susceptible to the Xavier-spawned psionic entity known as Onslaught. The event that brought her to the side of the angels, though, was the massacre of her first group of teenage mutant students, the Hellions, by the time-traveling mutant named Fitzroy and his Sentinels. With the threat of Onslaught out in the open, she was subconsciously using her telepathy to influence her then-current students, Generation X, to keep them safe. Of course, with them being teenagers, they put up some resistance. But Lobdell added a modicum of humor to it and showed that, as skilled as some of them were with their powers, they couldn’t stand up against Emma Frost. She took out Jubilee and Synch by causing their powers to backfire, she kept Husk from transitioning into a form useful for combat, and finally she gets to the one student she considers the most dangerous: Monet St. Croix, called “M”. Her abilities include flight, superhuman strength combined with near-invulnerability, super-intelligence and telepathy. As Jubilee described her, “M is…perfect. That’s like her mutant power or something“. She’s also similar to Emma in terms of having a wealthy background and the arrogance that comes with it. M had been upstaging Emma frequently, but this time Emma showed Monet exactly why you never challenge your teacher. She hit her with what she called a “psionic lightning bolt”, leaving Monet on the ground speechless and in pain. It’s commonly stated that women don’t like each other. But super-powered women? That’s worse, and fun to watch. Emma owned her students, especially M, without even lifting a finger. 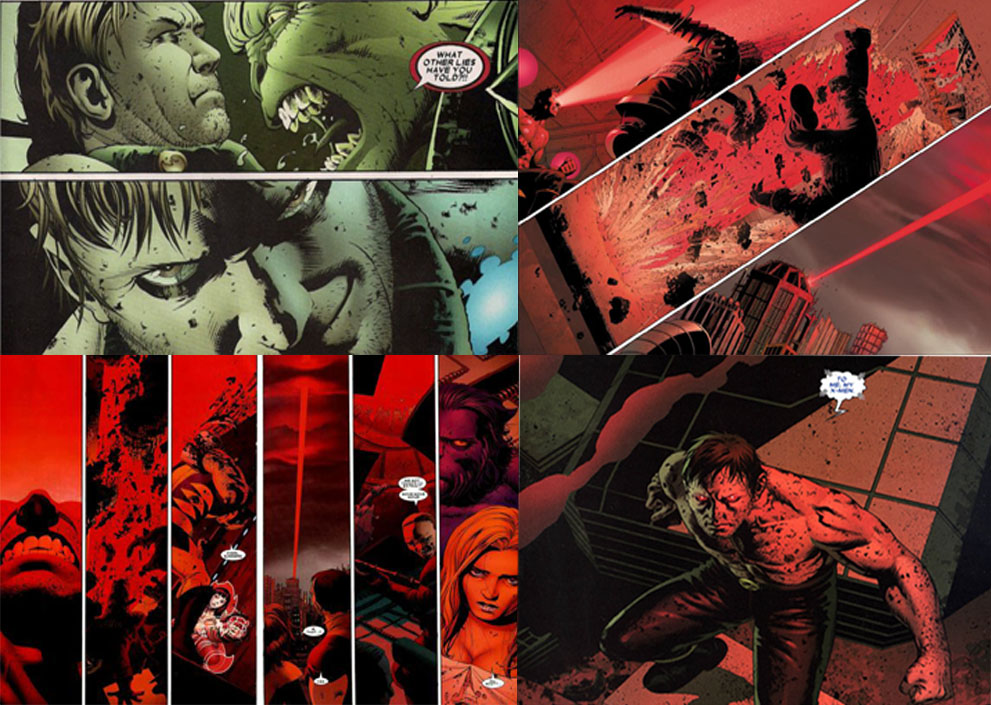 Joss Whedon’s run in this X-Men title along with John Cassaday’s amazing pencils made this the coolest book out. He gave the characters witty banter, had Kitty Pryde and Colossus consummate their relationship (read “they had sex”), expanded on some of Grant Morrison’s ideas and essentially did the one thing I hadn’t seen since Scott Lobdell was writing the title. He humanized the characters. Out of all of them, it was Scott Summers who became my all-time favorite X-character because of Whedon. He explored Scott’s issues, personality and the real reason why he can’t control his power. Emma Frost telepathically forced him to confront a repressed memory that occurred after his power manifested as a teen. Scott subconsciously decided to make his optic blasts uncontrollable, so he would be forced to remain constantly vigilant and thus, the consummate leader. When Frost removed that mental block, he seemed powerless. He was basically a human in an X-Men uniform. During the “Unstoppable” storyline, he followed through on a plan that involved him deliberately getting killed in the vacuum of space, captured, resurrected and interrogated by the Breakworld Powerlord Kruun. When Kruun learned of Scott’s plan, that’s when Cyke stopped playing possum and revealed that he’s had control of his power all along since Emma’s psychic therapy and unleashed an optic blast the likes of which have never been depicted. You know a character just got owned if it leaves Wolverine in awe. And to top it off, he uses his telepathic link with the team to steal a phrase that once belonged exclusively to Charles Xavier. It left me in shock and I still get amazed when I read this issue. This gets the top spot because it fully established Scott Summers as a cunning chessmaster who can out-think his opponents. He took a BIG chance and it paid off. Plus, you see him crack a rarely seen smile before he lets loose. 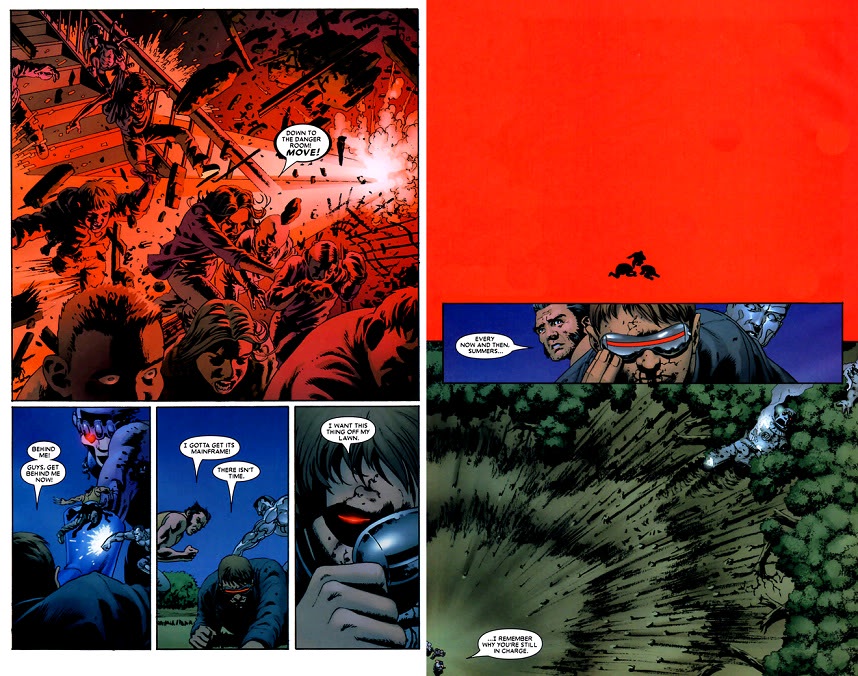 “I want this thing off my lawn.“

This one deserves an honorable mention. It’s the very  moment of awesome in Astonishing X-Men that made Scott Summers my favorite character.