One of the greatest enigmas in gaming … revealed!

The game Banjo Kazooie was released on the Nintendo 64 in 1998, and became an instant success, as well as one of Rare’s most popular games overall. It garnished perfect reviews from critics and player alike, and went on to become one of the highest selling games of the console, as well as appearing on many publication’s top 10 and top 100 lists. But what gamers would eventually come to realize is that this game harboured a great secret, which would become one of the biggest mysteries in the video gaming.

Throughout the game, many players found that there were many areas that were inaccessible, which was fairly common in games at the times, and has continued to be so to this day. It wouldn’t have even been an issue in the first place, but there were players who started noticing not only locked ff areas, but locked off items. In the level Freezeezy Peak, there’s an anthropomorphic Walrus named Wozza, who retreats to a cave every time Banjo goes to try and talk to him. What the player must do is have the game’s shaman character Mumbo turn Banjo into a walrus himself. Once this is done the player will be able to talk to Wozza, who will then give Banjo a jiggy; one of the many items that must be collected in the game.

Not only that, but Banjo will then be able to enter Wozza’s cave, where one of the level’s Jinjo collectibles are, as well as a very well hidden honeycomb piece. However, the more intrepid player will also notice another secret area in the cave that is blocked off by a wall of ice. Most players will have assumed that this was for later on in the game, and that there existed a means of entering areas like to be obtained later on. But this never happens. The wall of ice is completely impenetrable, and no conventional means can be used to enter the room. The only thing players could do was enter first person mode and see what was behind the wall of ice. If players do this, they will be able to see that the opening leads to a cave with a giant icy key rotating in the middle of it.

What this key did remained a complete mystery for the most part, since there was nothing in the game to indicate any possible use for it, such as an ice door or ice treasure chest. If the player manages to beat the game after collecting every jiggy, the game’s ending will be expanded slightly, and the Mole Bottles will show Banjo a series of photos illustrating hidden areas of the game, including the cave with the ice key inside. The other items were two hidden eggs of different colours. It was explained that these items had something to do with the game’s upcoming sequel Banjo-Tooie, and there would exist a means in the second game of gaining access to the items in the first game. 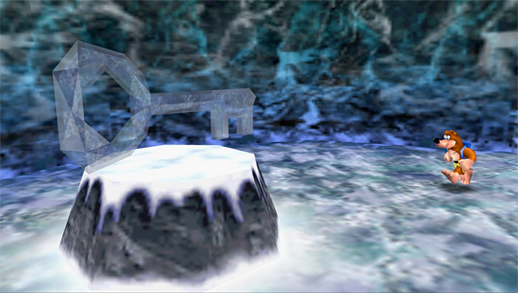 However, not everyone was willing to wait. Two Internet users named Alan Pierce and Mitchell Kleiman, who went under the Internet pseudonyms Ice Mario and SubDrag respectively, created a Banjo-Kazooie fansite named Rare Witch Project, managed to hack into the game, endeavouring to find out exactly what the deal was with these hidden items. What they found proved to be a lot more interesting than they had initially hoped. They found that aside from the ice key and the two hidden eggs, there were four additional eggs hidden throughout inaccessible areas of the game. They found that inputting cheats into the sandcastle area of the level Treasure Trove Cove could give the player the means to collect these items, and that the second game would have supposedly provided these cheats upon playing it. The items can be collected, and placed on a newly added menu in the game called the Stop N’ Swop menu. And for anyone curious, I will reveal how to get them.

To get the cyan egg, input the sentence “cheat, don’t you go and tell her about the secret in her cellar”. Head off to Mad Monster Mansion, and the egg will be in the cellar, inside a previously inaccessible barrel marked 1881, which interestingly is a reference to an old Rare game called A Tick A Tack.

To get the pink egg, input the sentence “cheat, out of the sea it rises to reveal more secret prizes”. Stay in Treasure Trove Cove, and an island will be raised from the ocean, which the payer will be able to enter, and traverse a raised area inside with the pink egg on top.

To get the blue egg, input the sentence “cheat, a desert door open wide, ancient secrets wait inside”. Head to Gobi’s Valley, and the egg will behind the door where Gobi was previously, and in the sarcophagus in the middle of the room.

To get the green egg, input the sentence “cheat, amidst the haunted gloom, a secret in the bathroom”. Head back to Mad Monster Mansion, and the egg will be in the bathroom on top of the anthropomorphic toilet.

To get the red egg, input the sentence “cheat, the secret you’ll be grabbin’ in the captain’s cabin”. Head to Rusty Bucket Bay, and break into the captain’s quarters of the boat by smashing one of the windows from the outside. The red egg will be in there.

To get the yellow egg, input the sentence “cheat, now Banjo will be able to see it on Nabnut’s table”. Head over to Click Clock Wood, and the yellow egg will be in Nabnut’s tree house, and on top of his table.

Finally, to get the ice key, input the sentence “cheat, now you can see a nice ice key, which you can have for free”. Head back to Freezeezy Peak, and the ice barrier will be gone, allowing the player to collect the ice key.

The downside to all this is that the items were revealed to do absolutely nothing, since they were originally intended for use in the game’s upcoming sequel, and that the second game would indeed give the players the means to get these cheat codes, and thus secrets would in turn be unlocked within the second game. However, in the few years leading up to the release of Banjo-Tooie, Rare seemed very coy about what method would be using to achieve this feature, leading to a whirlwind of speculation. The most prevailing theory was that the cartridge would use lock-on technology; similar to what Sega did with Sonic & Knuckles as an expansion to Sonic the Hedgehog 3. However, when Banjo-Tooie was finally released, the method was never revealed, and the entire concept seemed to be abandoned. It was instead substituted for a means of finding the ice key in Banjo-Tooie, along with three hidden eggs, which offered a range of different abilities. Most notably, the ice key revealed a creature called the Mega Glowbo, which could be taken to the level Pine Grove in order to transform Kazooie into a dragon.

Therefore, it became obvious that whatever the original plan was to implement this whole feature to begin with, Rare had abandoned it. However, the speculation was far from over; especially as Rare wanted t out of their way to taunt players with the mystery of what the original plan was with every opportunity that presented itself; even after they’re relationship with Nintendo. In the Xbox game, Grabbed by the Ghoulies, one of the blackboards contained a reference to it, with an illustration saying “collect ice key, collect four eggs, unlock secret area”, but it doesn’t hold up to closer scrutiny, since no secret level was ever found in Banjo-Kazooie’s ROM file. In the game Banjo Pilot, there was yet another reference. Upon completion, the character Cheato will have an item called Stop N’ Swop available to buy for 999 Cheato pages. If bought, Cheato will taunt the player by saying:

“So, you wanna know about Stop N’ Swop, eh? I hope you’re ready, here goes… why don’t you stop annoying me, and swap this game for a nice book or something?”

The speculation continued, especially as EGM printed their own theory that the Stop N’ Swop feature would make use of hop swapping; the practice of swapping cartridges in a console with the power still on, allowing for a small window of time for something like to be implemented. But again, this theory didn’t hold up to closer scrutiny, since the practice would inevitably have been too dangerous for Nintendo to have allowed for use in a licensed game from a second-party developer. But believe it or not, the truth wasn’t a million miles off.

The truth was finally revealed in 2004, but in a particularly low-key and obscure fashion. In 2004, the US government made public a patent that was filled in 1999 by Rare themselves; patent 6820265 B1, the patent of system method and data storage medium for sharing data between video games. In layman’s terms, the Nintendo 64 had a specific kind of memory called RD-RAM. The idea of which was that Banjo- Tooie would give the player the cheat codes to access the items in Banjo-Kazooie, and once added to the inventory, the console would be turned off, storing this information in the console’s memory for a total of ten seconds, giving the player an adequate amount of time to quickly switch the two cartridges, and power the console back on. It wasn’t too different from hot swapping in its basic premise, but since the console would have been turned off, it would pose no danger to either the console or the cartridges. The reason why this practice wasn’t implemented, however, was because it would only work in early models of the console.

In 1999, the Nintendo 64 went through some internal technological changes. It wouldn’t effect with the playing of games, but it would drastically effect the idea of the Stop N’ Swop, since the window of opportunity was narrowed from ten seconds down to one second, and whilst many would have been able to use the feature at the time, many others wouldn’t have; and so, the entire idea was dropped.

However, if players wish to experience the Stop N’ Swop feature as it was originally intended, it’s now possible to do so, since both Banjo-Kazooie and Banjo-Tooie have since been ported to the Xbox Live Arcade, and Banjo-Tooie now gives players the facility to unlock the items in Banjo-Kazooie, and Banjo-Tooie had additional secret items available. The ultimate purpose of all of this, however, was to unlock more trinkets in the third game, the ill-fated Banjo-Kazooie: Nuts N’ Bolts. But whilst the end goal would prove to be extremely anti-climactic, the entire thing still makes for an interesting story, and for the longest time remained one of the biggest mysteries in gaming.