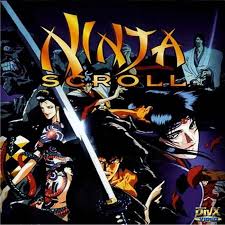 Now this is what you call a splitting headache.

It’s hard to believe but it’s been 20 years since the legendary anime Ninja Scroll hit these shores and turned thousands of U.S. citizens into giggling anime fans.

For me it’s one of my 4 bedrock anime titles, the movies that flash in my head whenever I think “Japanese Animation” (The other three are Project A-Ko, Akira, and Ghost In The Shell). If you grew up in the 90’s and were even a passing anime fan, those movies were on your radar along with whatever else you were lucky enough to find at Blockbuster Video.

What follows is the fight between Jubei, the wandering ninja, and Tessai, a stone demon working for the Devils of Kimon. There’s no real spoilers in here and this scene is from the beginning of the film. The whole movie is one giant kick ass, dare I say perfect, anime film. And this scene is just  a small sample of all the awesome to be enjoyed.

So sit back, relax, and drink in this amazing film. They really don’t make them like this anymore.