THE FANTASTIC FOUR Was Unreleasable For A Reason

Since the recent reboot came out to near universal derision, it seemed a ripe time to revisit the movie that began the Fantastic Four’s disastrous record on the silver screen.  By now it’s well-known that the production company Neue Constantin was set to lose the rights to the film property and needed to make a quick version on the cheap in order to retain them.  Enter: Roger Corman.  This man’s the king of economical filmmaking, so I was interested to see which elements worked within the Five Obstructions-like constraints of an effects-heavy superhero movie made with a scant $1,000,000 budget.  If anything, Corman is a smart producer, so it will be interesting at least.

Or at least I thought he was a smart producer.  That trailer doesn’t look too promising.

Forced this one down with several much needed glasses of Maker’s Mark.  Served neat, of course, per doctor’s orders.

Since nobody seems to care too much for the copyright for this one, it’s easy to find streaming on Vimeo or YouTube.

The story beats in The Fantastic Four happen so fast and furiously that it feels dumb to recap them without sounding like a child telling a story exclusively using the word “and then…” as punctuation.  Reed Richards (Alex Hyde-White) is a brilliant college student whose friends include the amicable Ben Grimm (Michael Bailey Smith) and the arrogant Victor Von Doom (Joseph Culp).  After a failed experiment due to his own miscalculation, Doom is burned alive and killed (or is he?!?!)

Flash forward ten years to Reed and Grimm getting ready to conduct a new experiment in space.  They return to the old boarding house they lived at in college to greet the now grown son and daughter of the woman who owned the house.  Despite not seeing each other in years, the former students ask the 20-somethings if they want to ride in a rocketship with the same inflection they would use if they were asking them to go bowling.  “Mrs. Storm!  Can Johnny (Jay Underwood) and Sue (Rebecca Staab) come to space with us?”  What if all dangerous experiments had participation chosen by previous living arrangements?

Johnny and Sue’s mother (who the brother/sister pair apparently still live with) sees them all standing together and says “Look at you!  The fantastic four!”  Were they always called that or did she just think of this on the spot?  Why did Reed and Grimm even have this weird relationship with the preteens that happened to live in the same boarding house in the first place?  What kind of mother let’s two college-aged men live with their clearly smitten 14 year-old daughter?  Were these the living arrangements for all four years of school?  Why didn’t they live in a dorm?  WHY ARE THE KIDS ALLOWED TO GO TO SPACE?

Also, did Mrs. Storm know that Reed and Grimm worked at the Baxter Building when she made that nickname?  It’s address is 4444… that seems convenient. 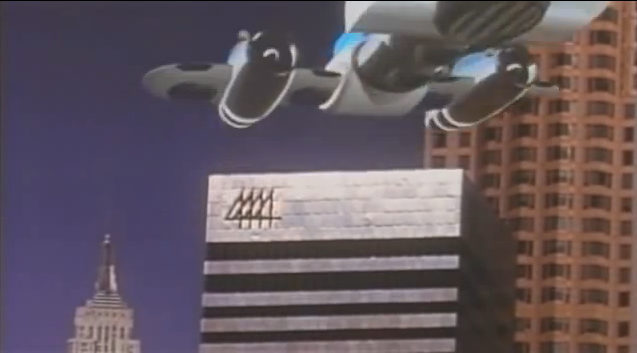 After a Rumplestiltskin-looking Mole Man knock-off named The Jeweler (Ian Trigger) steals the diamond that’s meant to power the spacecraft, things go awry and the “fantastic four” are hit by cosmic rays giving them their powers.  A cloaked figure named Dr. Doom, who anyone with a brain can identify as Victor Von Doom with a mask, also wanted the diamond.  This leads him to butt heads with The Jeweler who, in addition to stealing the coveted gemstone, has also kidnapped the recently rock-covered Ben Grimm’s love interest: Alicia Masters (Kat Green).

Every plot point is equally senseless and convenient, while the execution is excessively goofy. The Jeweler is nothing more than a harmless plot device who gets all the action started because he’s in love with the same blind woman as Grimm.  Doom then shows up to his lair, tells him to scram, and he disappears for the rest of the movie.  This is also the point where Ben Grimm inexplicably loses his rock powers in the midst of confronting Doom, runs away, and screams in frustration mere seconds later which magically causes him to get his powers back.  They also shoehorn in the catchphrase “It’s clobberin’ time!” four times. 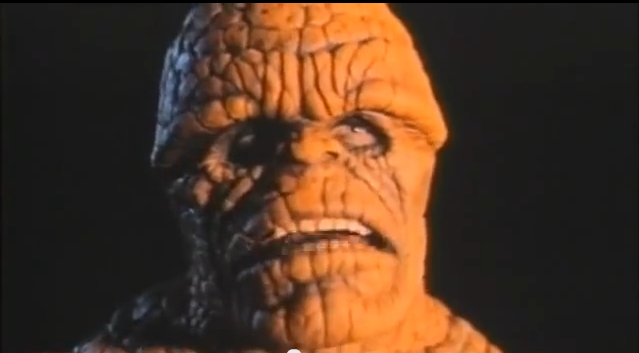 Even compared to Ben Grimm’s random power fluctuations, Dr. Doom isn’t much more consistent as a character.  Despite having a completely arbitrary plan to shoot New York with a laser, he insists on cracking wise in between his self-serious soliloquies.  “Come to Latveria.  Bring the kids!” he says in the presence of people who clearly don’t have children.

The weird thing is how a movie that threatens the violent eradication of a major metropolitan city still stumbles so heavily on setting up the stakes.  The tone has something to do with it, but the careless filmmaking is the major culprit here.  At one point, Doom says “Let me show you the true purpose of the laser”.  He proceeds to shoot it and then show stock footage of nuclear explosions decimating buildings.  Did he just blow up a different city to show the power of the laser or is this also presented as stock footage in the world of the movie?  If this is real why doesn’t anyone care about those casualties?  If it’s not, that has to be the least effective show of terroristic intent in the history of supervillainy.  Let’s get some real emotions here, people!

The members of the now official Fantastic Four take much too long to figure out that the presumed deceased doctoral student Victor Von Doom is also Dr. Doom.  But once they do, they head to his castle in Latveria and make incredibly short work of him.  Mr. Fantastic/Reed punches him with his super long arms three times (“This is for trying to kill me.  This is for trying to kill my friends.  And this one’s for being a real jerk.”) and knocks him off a tower to his imminent death.  Well that was easy. 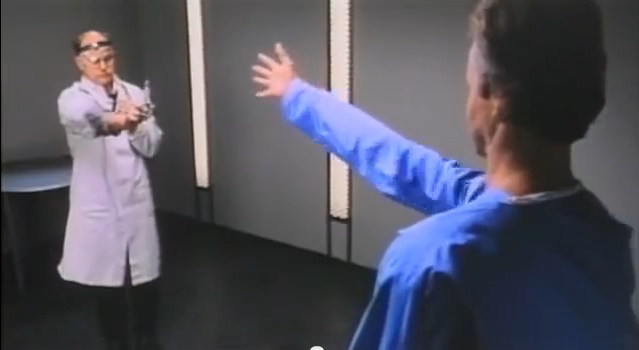 Unfortunately, the laser is still armed and aimed towards New York.  In order to save the city, Johnny “The Human Torch” Storm flies out to stop it by, uh, letting the city-leveling laser blast hit him square in the chest?  Then he shoots fire at the laser and pushes the laser beam into space and creates a spectacular explosion.  It’s lucky that this plan works since lasers never have and never will work this way.  More to the point, there are some bad computer generated effects in the last 30 years or so of cinema… and then there’s this.  The budget may have been small, but the Saturday morning cartoon ReBoot was more photo-realistic than this climactic action scene. 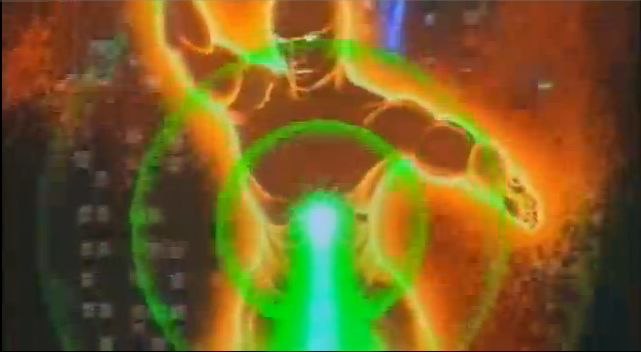 Despite The Fantastic Four clearly being the unholy cross between a preschool play and an especially boring backdoor TV pilot, there is a strong sense of earnestness.  It’s a family friendly affair with big smiles and goofy humor.  It may not make for the most entertaining of watches, but at least there’s a sense of fun involved.

It tends to shock people when they find out children’s tv show hosts are real adults who aren’t the same people offscreen as they are when they’re working.  The same idea is displayed here.  Unlike the Tim Story outings, none of the actors seem like they’re playing “down” to the material.  Because there’s some level of commitment, the unintentional laughs come pretty freely… especially in Dr. Doom’s wildly over-the-top gesticulating in lieu of facial expression.

No matter how genuine the performances might have seemed (and don’t get me wrong, just because they’re genuine doesn’t mean they’re not horrible), clearly there wasn’t that much effort in any other aspect of filmmaking.  Overall, the whole thing is plain amateurish.  Many of the people involved have made movies before, but the finished project doesn’t suggest that.  Outside of the serviceable main theme, there is a lot of ham-fisted, yet charmingly hilarious music that’s supposed to sound orchestral but might actually be composed via MIDI.  In addition to an obnoxious number of dutch angles, the cinematography is unforgivably dark giving the impression that 60% of the movie was just filmed on a black box stage. 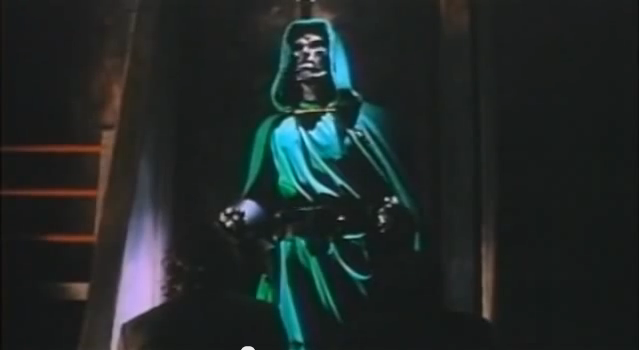 Even without the knowledge that this was a shoddily made piece of trash for legal reasons, it feels like corners were cut at every available avenue.  There are significant gaps in storytelling and character choices.  The sequence where Ben Grimm loses his powers for no reason has no bearing on the rest of the film.  Alicia Masters disappears completely in the third act despite possibly having more lines than Sue Storm herself (who was possibly invisible during the entire second half of the movie).  There’s even a hastily thrown together wedding epilogue that is barely foreshadowed at all.  But even worse, there are no real action beats.  The only time something thrilling happens with actual consequences at stake is during the aforementioned, terribly rendered “Human Torch V. Laser” fight.

No, don’t see The Fantastic Four.  And given reviews from last week, apparently don’t see ANY Fantastic Four movie… ever.  Read the Lee/Kirby historic runs on the comic book.  Read John Byrne’s 5-year run.  Read Hickman’s 616 OR Ultimate universe runs.  Hell, watch The Incredibles.  Until someone figures out to balance the tone in feature film form, these movies are all abominations.

But if you feel like torturing yourself… the entire unreleased film is available below.

All images courtesy of New Horizons