This review is of Volume 1, which collects the first 4 issues of Robocop: Dead or Alive. It’s important to lay that out because the story is not over. What we get here really is the setting into motion of a bigger next act. It’s also important to say that up front because it’s hard to gauge if my problems with this first set will right themselves in the next collection. 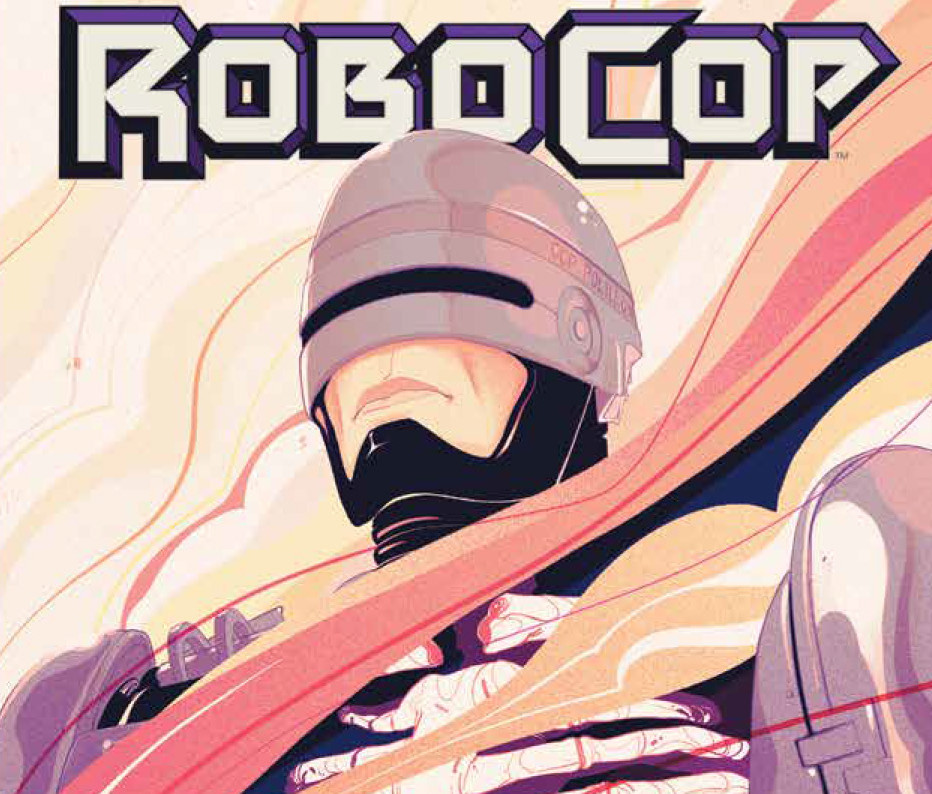 1. If you’re a fan of Robocop‘s Detroit, then you’ll love Dead or Alive. The setting, the rundown streets and alleyways, the garbage and graffiti, the rusted warehouse areas, they’re all here. Almost to a fan-service degree, you get a little tour of all the memorable places we visited in Paul Verhoeven’s 1987 film.

2. If you wanted to know what happened directly after that 1987 film, you’re in luck! The familiarity with Murphy, Lewis, and the growing divide between OCP, the police and the citizens are all still intact. The atmosphere is perfectly captured by writer Joshua Williamson (Ghosted) & artist Carlos Magno (Planet of the Apes, Deathmatch). There’s a subplot with Lewis taking the detective’s exam, and what that could possibly mean for the future of her partnership with Murphy. It’s a slight thread but I liked it.

3. It’s hard to fill the shoes of Clarence Boddicker – kind of like trying to replace Hans Gruber in each Die Hard sequel – but Killian is an above average and appropriate villain. He has the ruthless sadism of Boddicker and the deadly smarts of Dick Jones. Just out of jail, we get caught up with the current state of Detroit as Killian learns about it: the half man/half machine, the drop in crime, the privatization of the police. And as we learn about it, we also see the wheels moving in Killian’s head. He creates a devious plan that, even in 4 issues, continues to slice through layer after layer of the conspiracy onion. 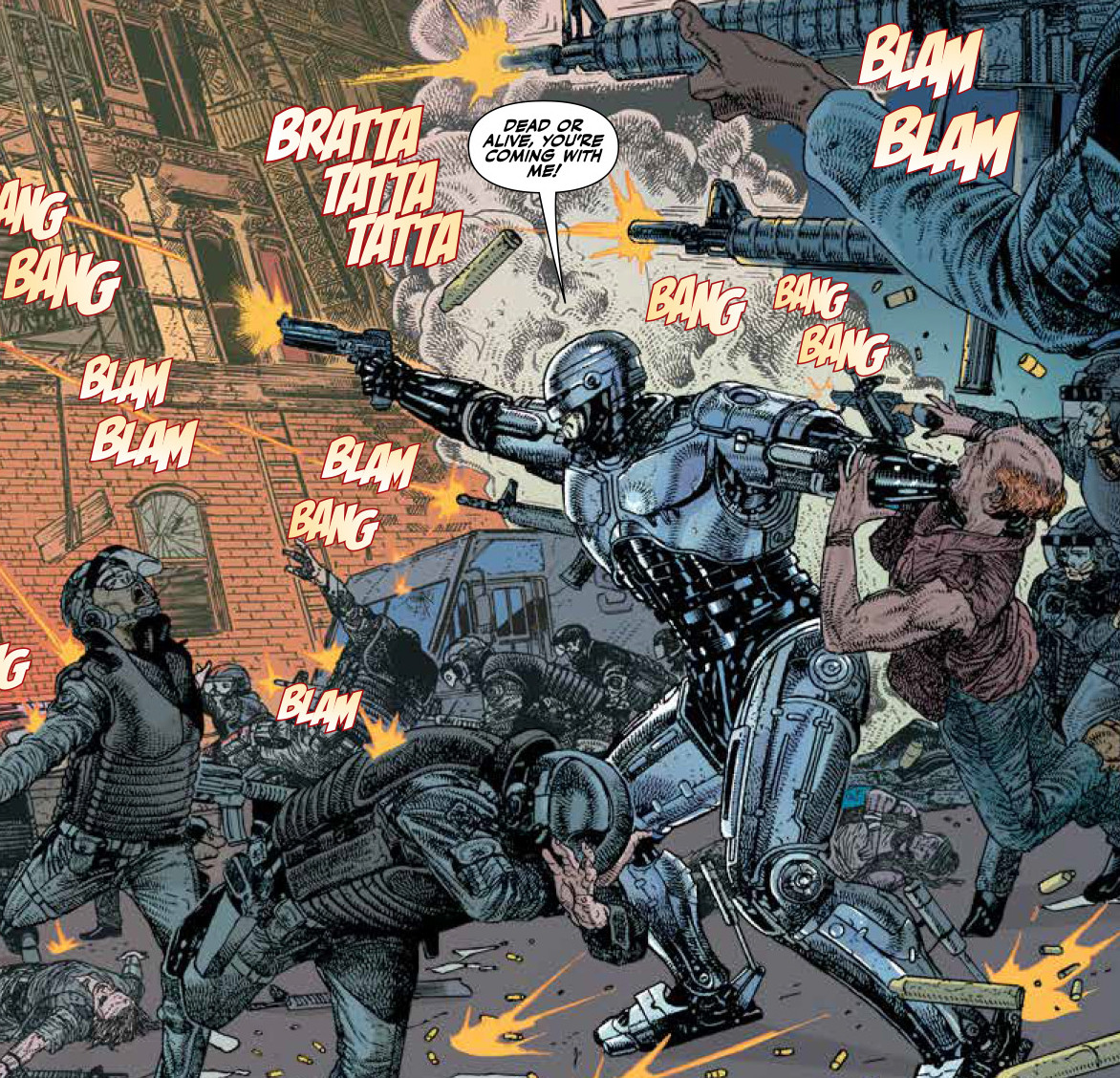 WHAT’S NOT SO GREAT

1. If you idolize Robocop the way I do, appreciate the various levels of its satire, and legitimately think it’s one of the best movies ever made, then Dead or Alive Vol. 1 might be seriously underwhelming. For one, there’s a political statement it makes that can, especially in our current atmosphere of school shootings, feel very icky.

(Some background I think is appropriate: I grew up in a very Conservative Republican household. I’ve heard every reason to protect Second Amendment rights. While I was growing up, I thought most of those reasons had validity. However, as an adult, having met more Liberals and those middle-of-the-road in the political spectrum, and considered the truth about gun ownership in the western world, I realize most of those reasons are extremely flawed and misplaced. This paints my view of this comic.)

So, it’s all well and good for Dead or Alive to tackle gun rights, and even use it as part of the bad guy’s conspiracy to own and dismantle the police, but we even have the pro-gun attitude being funnelled into dialogue from our heroes, like Officer Anne Lewis. The protection of Second Amendment rights is given such great importance that the plotline of OCP/the police enacting gun control & confiscating unregistered firearms is seen as a greater evil that will only lead to city riots. When Dead or Alive has multiple examples of a character pleading for gun availability to protect his livelihood and business, it quickly devolves into an NRA ad. That is unless…

2. There’s satire. Which there’s not. At least not discernably in these first 4 issues. And that’s the real problem with Dead or Alive, and kind of the problem with how Robocop’s universe has been handled after Verhoeven’s original. Look at how Robocop 2 & 3 and the comics and the video games have tackled Robocop, OCP and the “fictional” Reagan-like America. To various degrees, they’ve lost the satire and replaced it with tactless ultraviolence. Even Frank Miller, who penned the screenplays to 2 & 3, was more in love with the grimy, decayed Detroit and sudden bursts of violence than he was with any meaningful satire. Smart, scathing storytelling gave way to making Robocop just another “comic book character,” a reason to write and draw a violent little yarn. Funnily enough, his UK counterpart, Judge Dredd, maintained his satire and balls-to-the-wall violence across many different media.

Like I said, this might all right itself in the end. Williamson could course-correct us into some biting, dark territory that harkens back to the excellence Robocop once had. But for now, if you just want the Tin Man and a little brain splatter, be my guest. 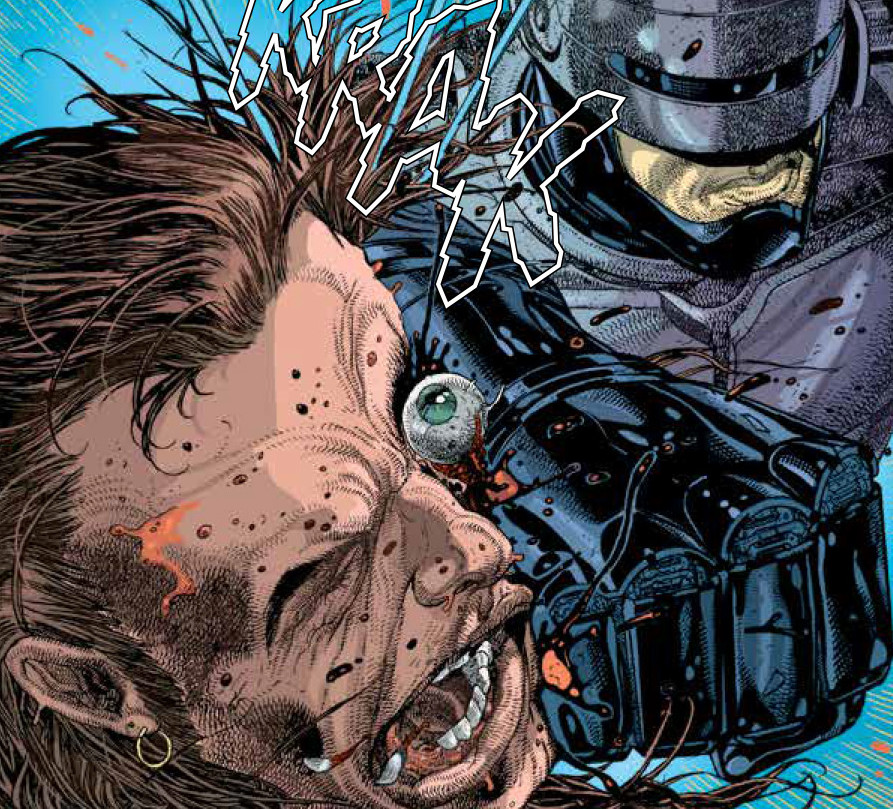 Robocop: Dead or Alive Vol. 1 is available now.
Purchase HERE | Greg on Facebook |  Action A Go Go on Twitter and Instagram |Be sure to leave your thoughts in the comments section!