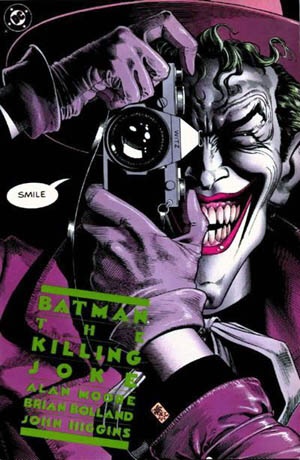 By @thechewdefense
In a semi surprising move at a panel, during the New York Comic Con it was revealed that DC Comics have given producers permission to make the animated “Batman: the Killing Joke” R Rated. This could be a big move if it goes through. 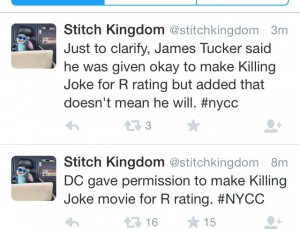 For those unaware the Killing Joke is Alan Moore’s very controversial & influential graphic novel that contains the Joker’s origin story. It also contains some graphic and shocking violence courtesy of the Joker as well. Due to the Graphic Novel being 48 pages, it will be interesting to see what they add to pad the run time. Most of the DC Animated Universe (or DCAU) moves are very hard PG-13’s to begin with. There’s surprisingly a lot of blood in “Assault on Arkham”, which is also the DCAU Suicide Squad movie. Even the Gotham tv show on Fox would probably get an R rating if it were a movie, as blood and bullet hits are generally not allowed in PG-13 movies. Some have pointed out on twitter that DC is becoming less strict on ratings with their media. The newest Batman video game for example has an M rating. There is also a chance that the upcoming Suicide Squad feature film will be R rated as well, or in the very least, a hard PG-13. 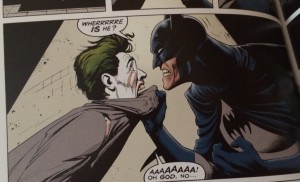 There’s also word that both Kevin Conroy and Mark Hamill are reprising their roles as the voices of Batman & the Joker respectively. Both are considered the definitive voices for any DCAU project. Batman: the Killing Joke is expected to be released sometime in 2016 though no official date has been revealed.