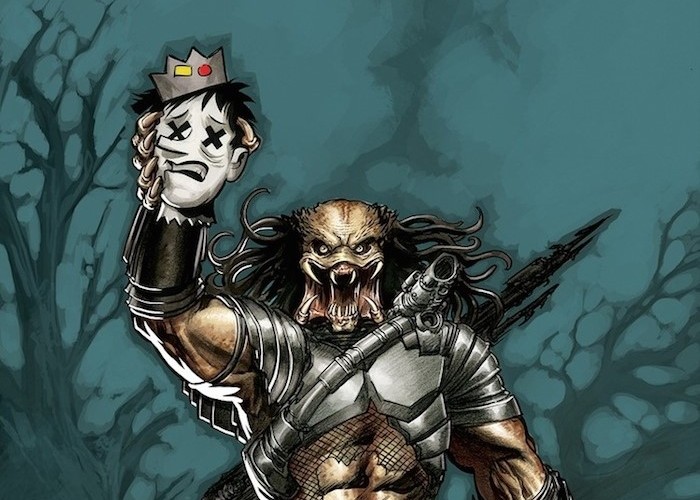 REVIEW: ARCHIE VS PREDATOR HARDCOVER STICKS IT IN AND BREAKS IT OFF

Few things in this world are as special as Archie comics crossovers. For instance, waaaay back in 1994 Archie found himself face to face with none other than Marvel Comics bad boy, the Punisher. At the time the Punisher was a huge seller and was murdering bad guys left and right. It was a match made in comic book heaven, one of those rare events that only happens once a generation and actually works despite no blood being spilt in the actual title. More than 20 years later, Archie and crew (and I do mean crew) go up against the intergalactic hunter known as The Predator in ARCHIE VS. PREDATOR. But unlike the time the Punisher visited Riverdale…the streets will run red with blood. Lots and lots of blood. 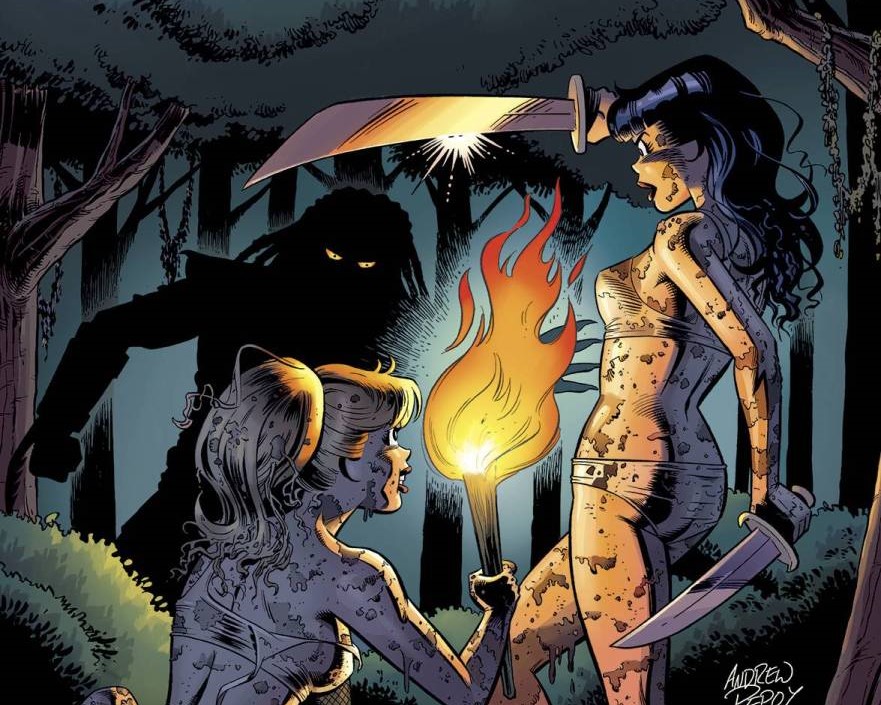 Now, even though we broke the news of ARCHIE VS. PREDATOR along with the rest of the internet, I actually missed the individual issues and have only read this as a cover to cover hardcover. In that respect, it was a lot of fun. There was a forward by Roberto Aguirre-Sacasa (Archie’s CCO) that goes over Archie’s history and explains how this partnership came about with Dark Horse, who licenses the Predator from Fox. What’s interesting here is how everyone, from the start, was “all in.” No one wanted to pull punches this time around. This was going to be a mash up of different worlds, no matter what. And you can tell everyone had fun doing it. 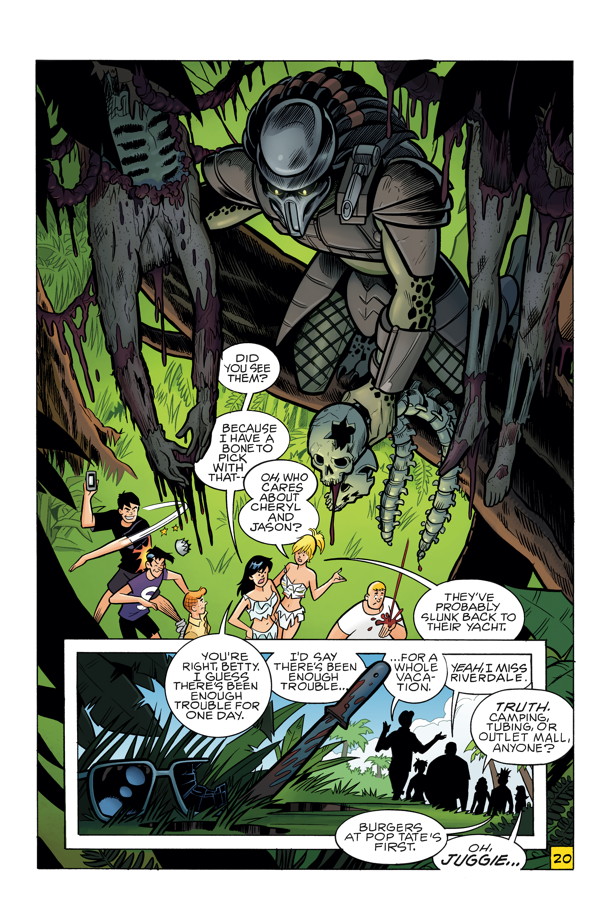 When the story itself starts its classic Archie, with Alex Di Campi writing the script and Fernando Ruiz doing the pencils. The crew (consisting of Archie, Betty, Veronica, Jughead, and Reggie, of course) are pondering what to do over spring break when some rich kids show up. They boast about their fancy vacation when all of a sudden Jughead pulls a ticket out of his potato chip bag. He’s just won an all expenses paid trip to the jungle, and the whole gang is invited.

And we all know what hides in the jungle, right? And murders people? 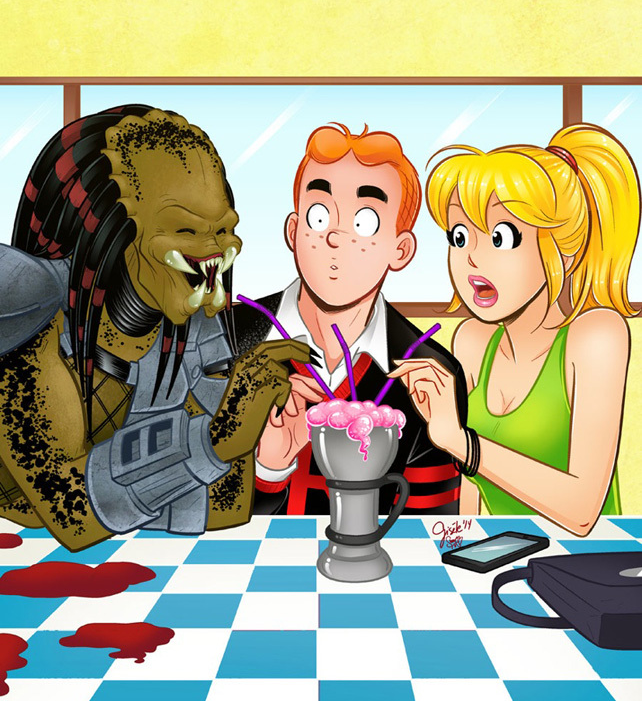 Some Archie-riffic drama happens and then they eventually they make it back to Riverdale and THINGS GET NUTS! At several turns I was laughing out loud and then pursing my lips at the straight up ownage that occurs in this book. I can’t believe they let this happen in the classic Archie style of art, but they did and somehow that magnifies the bloodshed by something like 1000%. And that bloodshed makes this is a true Predator story and worthy of the cannon. 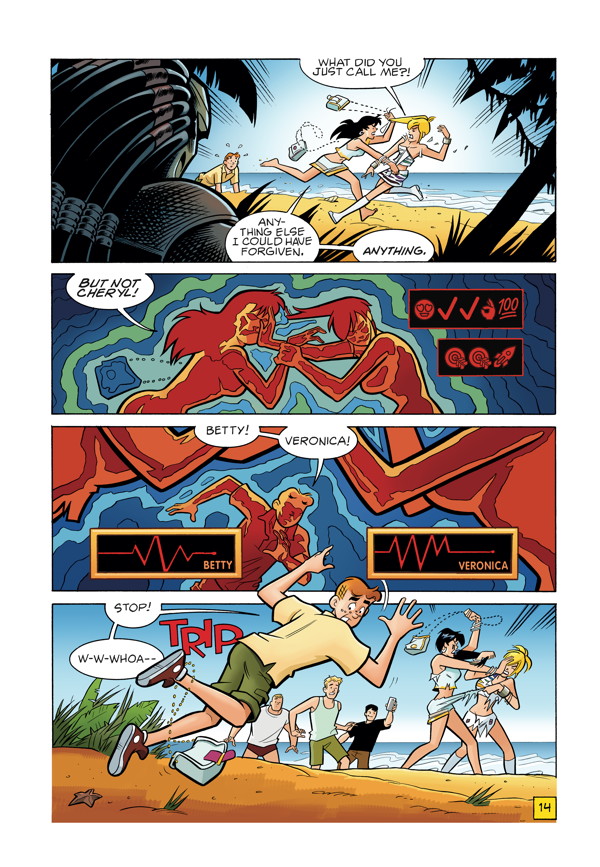 Along the way other characters from the Archie universe make cameos, as well as a certain gun toting Marvel hero (if your eyes are sharp). In fact, the story is loaded with call backs and references and the writing overall is great because the story isn’t afraid to make fun of itself in some surprising ways. The whole thing pays off because of how self-aware it is, and that just makes everything better.

Once you finish the story you get the traditional graphic novel goodies. Editor Brendan Wright does a very good afterward that goes even deeper into the gestation of this comic book anomaly. After that there are a couple other very short weird crossovers from Dark Horse and Archie Comics like Hellboy/Sabrina the Teenage Witch! The amazing variant covers make an appearance soon after, which themselves are incredibly funny. Finally, concepts for the Arch-ified Predator are revealed with sample pages and unused covers. Pretty standard graphic novel stuff, but because of the special nature of this story these extras manage to feel special themselves, as if you are in some crazy comic book skunk works that the President just declassified. 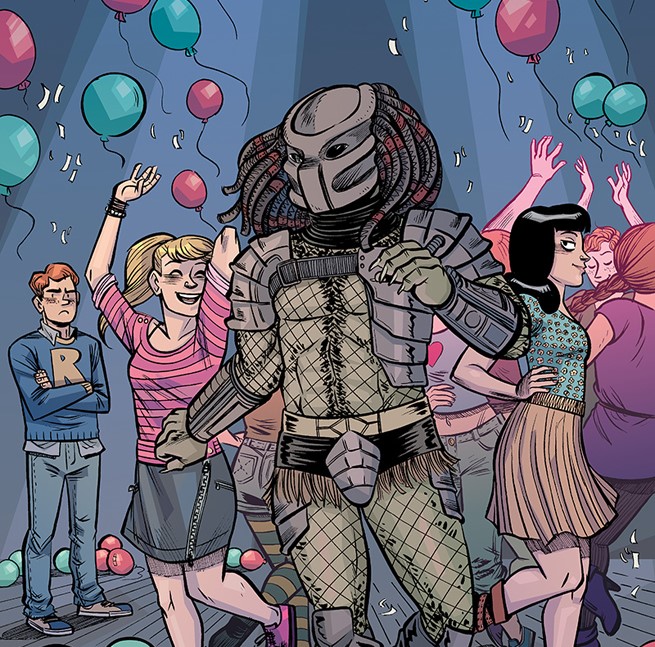 Let’s just all be reckless teens together!

Is this worth buying? If you don’t get it, it’s probably not for you. I don’t know if you can tell, but I loved this. Apart from the slow beginning to the story itself this is totally worth the money for the hardcover. If the concept makes you chuckle, or if you are a fan of either franchises, this is a great read.

And it makes me glad that there is still room out there for crazy stuff like this in comics.