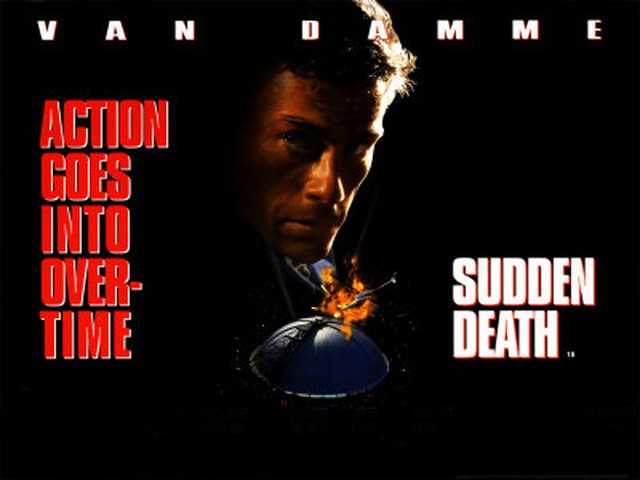 EXPLODING HELICOPTER: IS SUDDEN DEATH THE BEST DIE HARD KNOCK-OFF EVER MADE?

After Die Hard rewrote the rules of the action movie, studios couldn’t help but try to repeat its success by slavishly replicating its plot in a host of different locations.

But, such was Hollywood’s enthusiasm for churning out these thinly disguised knock-offs – it wasn’t long before they ran out of sensible locations for them.

Yet, just as it seemed there was nowhere left to regurgitate the Die Hard formula. Someone had a brainwave: Let’s do Die Hard in an ice rink.

That film was 1995’s Sudden Death which saw Jean Claude Van Damme take on a gang of ruthless terrorists who’ve taken the Vice President hostage during the deciding game of the ice hockey championship.

But while the premise sounds unpromising, Sudden Death is actually an under-appreciated action movie gem.

With a series of creative fight sequences, a fantastic moustache twirling villain in Powers Boothe, and a subversive streak of nuttiness, this is a film that’s long overdue a critical rethink.

So on the new Exploding Helicopter podcast hosts Will and Dara make the case for rehabilitation of this minor classic. And they take a look at one of the most operatic exploding helicopter scenes ever committed to celluloid.

Listen to the show on iTunes, Podomatic, Stitcher or via your preferred player.