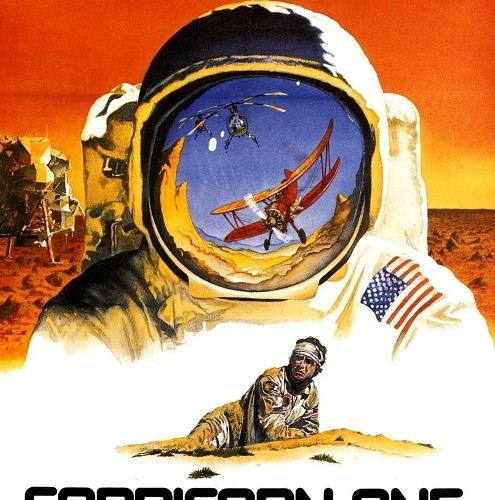 EXPLODING HELICOPTER: IS CAPRICORN ONE A CONSPIRACY THRILLER TO BELIEVE IN?

Despite the passage of many decades and the absence of any actual evidence, a handful of conspiracy theories continue to capture the public’s imagination. Did aliens land at Roswell? Who really shot JFK? And is the world secret cabal called the illuminati.

But one of the most enduring conspiracy theories is whether the Apollo 11 mission really landed a man on the surface of the moon.

That idea was the inspiration for 1978 thriller Capricorn One which imagined how NASA might fake a manned landing on the surface of Mars.

Moments before they think their mission is about to begin the astronauts are blackmailed into taking part in the fraud. Meanwhile a maverick journalist beings to suspect that the Mars mission is a huge hoax. And when a crucial part of the conspiracy goes wrong, the astronauts realise the only way to save their lives is to try and expose the fraud themselves.

The film was written and directed by Peter Hyams, who would later go on to direct a bunch of action flicks in the Eighties and Nineties, such as Timecop, Sudden Death, and End Of Days.

And while the first half of the film concentrates on the unravelling conspiracy, it builds towards a tense duel between a pair of sinister helicopters and a bi-plane one of the astronauts is trying to escape in.

So, on the latest episode of the Exploding Helicopter podcast Will and Joe discuss whether this is a conspiracy thriller to believe in, or one that should no longer be trusted.

You can download the show on iTunes, Podomatic, Stitcher or your preferred player of choice.