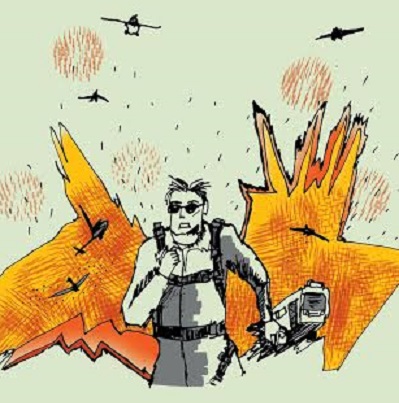 WHAT DOES IT MEAN TO DIE IN A FILM? WE INTERVIEW THE POET OF ACTION CINEMA

What does it mean to die in an action film?

That was the question which inspired writer and film fan James Trevelyan to pen Dissolve To L.A, a collection of poems about action movies from the Eighties and Nineties.

But rather than focus on the heroic deeds of Sly, Bruce or Arnie in those films, James tells the stories of the minor players. Those supporting characters or bit-part actors who briefly illuminate a film before their lives are extinguished through a violent, untimely death.

Each of the 12 poems takes a little known character from films including Beverly Hills Cop, Top Gun or Speed and imagines a brief moment or aspect in their life.

The poems answer important questions like, what did bespectacled comic-geek Hawkins make of life surrounded by a group of steroid-inflated troops in Predator? How track-suited Aryan Tony came to be a member of Hans Gruber’s gang in Die Hard. And what the final thoughts of Amanda Hunsaker were as she plunges to her death in the opening scene of Lethal Weapon. 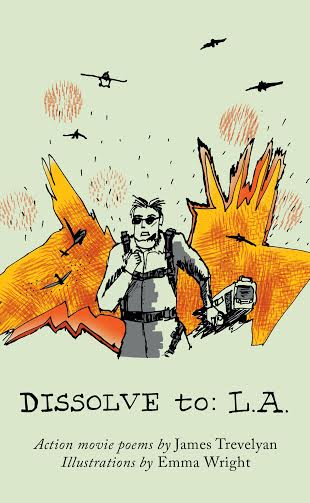 To find out more Action Ago Go tracked down James who kindly agreed to a voluntary interrogation.

Hello James, thanks for talking to Action Ago Go. Would you like to tell us a few things about yourself, and also something that you’d like to be true but isn’t.

Hi, thanks for having me! I’m James, a London-based writer and a film fan, whose poetry has received a glowing and lucrative endorsement from Tom Cruise.

Your collection of poems Dissolve To: L.A focuses on minor characters from very well-known films. But only ones who are killed or who experience misfortune or tragedy. What was it that drew you to tell their stories?

The first poem from this sequence came about during one of my several failed attempts to write a short screenplay. I had a section with no dialogue and was looking into how you might write action into a script, so went to read Terminator II: Judgement Day. There I discovered that the truck-stop owner in the opening sequences – the one who tries to stop Arnie stealing the motorcycle, but inadvertently hands over his gun and sunglasses – was called LLOYD. It struck me that, having given him a name, the writers had hinted towards a life beyond his only scene. Where other bit-part characters with one line are called FIRST JOCK or UNIFORMED COP, Lloyd had come much closer to existing.

So I decided to write Lloyd’s story as a poem – how an enormous naked man striding boldly into his bar had affected him, what might have happened after the Terminator had driven off – and found it was an interesting way in to writing about living life on the edges and morality (“I can’t let you take the man’s wheels, son”). Having enjoyed the process and the sense of discovery, I wrote one for Hawkins – the first member of Arnie’s team to die in Predator – and found there was just as much intrigue in exploring what it means to be out of place amongst macho men (…that handshake!!) and then to be the first to die. And so I continued trying to find the story in several more films.

How or why did you choose the characters that feature in this collection? Were there others you wanted or thought about including? 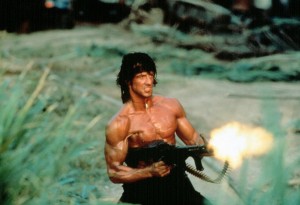 It certainly began as my favourite action films and it was fantastic to be able to rewatch them looking for characters who might have other stories to tell. As I began to show them to people or read them out, I found good reactions to the more well-known films so made sure to include poems for Top Gun and Jurassic Park. There were some pretty impassioned pleas from friends for poems on Speed and Con Air, but it was great to feel like these poems needed to be written.

When I submitted the original draft to The Emma Press there were a number that didn’t make the final cut and many more yet to be written. I was sad to leave out a Rambo poem. I had originally tried to write one for the only character he kills in Rambo First Blood, and then a line for each of the 58 he kills in First Blood Part II, but it was as long and unwieldy as it sounds! I did crowbar the exchange from the opening sequence of that film at the front of the pamphlet though as it seemed fitting:

RAMBO: Do we get to win this time?
TRAUTMAN: This time it’s up to you.

You illuminate particular moment in the lives of these minor characters. But is there one you’ve written about here or one that you’ve thought about, whose story you think could be told at greater length? Perhaps in a novel or film of its own? 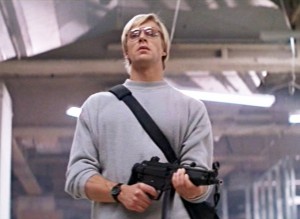 I like the idea that Tony – one of Hans Gruber’s henchmen in Die Hard – might have an origin story. My inspiration for that poem was finding on IMDB Trivia that the actor Andreas Wisniewski had been a dancer before turning to acting. He’s very tall and blonde, so I imagined that he might have been a ballet dancer, recruited outside stage-door by Gruber who is desperate to add some style to his team. I’d like to see what Tony’s family made of his decision to join and his subsequent death – if the Austin Powers reimagining of henchmen as real people with hopes, dreams and families hadn’t got there first!

You focus on characters from Eighties and Nineties action movies. Was there a reason why you didn’t include poems inspired by more recent films?

I did want to impose a bit of a constraint on the period I was writing so told myself it would be films from 1985-95 (with two exceptions). I do think it was a golden period for action cinema, and perhaps because they were more character-driven action films they were easier to write about. I do long for a time when sequels were made because of a demand to see what happened to these characters next, rather than interlinking franchises planned to exact release dates 5 years in advance. It does seem a lot of the biggest-budget films now are based on comic books, which more recently have packed the action into an exhausting hour-long fight scene at the end. Excluding Nolan’s trilogy, I’ve not enjoyed most of these films as much as I willed myself to.

We’re assuming you’re a fan of action movies. What’s your history with them? What are some of your favourites and what makes them great?

I’m a huge film fan generally, but there is something more communal about action films: I’m sure they were the first genre after animation that I enjoyed alongside my dad; and then the first films you go to see at the cinema with groups of friends and enthuse about. Other than the ones I’ve written for, I love those slightly-silly-for-being-too-serious films (step forward Wu and Stallone) and films with simple set-ups and amazing action like The Raid.

Maybe there’s something cathartic or familiar about the structure many of them follow – and then subvert – which is so appealing, or maybe it’s the individual set-pieces. Two moments stand out in particular in the last year: when Max suggests they turn back in Fury Road and when John Wick hits someone with his car and shoots him through the roof as he flies over. I love stuff like that – it makes you gasp, then smile, then settle in your chair like you’re in brilliant, terrifying company. 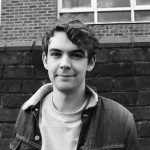 You can order your copy of Dissolve To L.A by James Trevelyan from The Emma Press.

You can find out more about James on his website.