Marvel Studios burst onto the scene 8 years ago and changed not just how super hero movies are made, but how movie studios are run. The term “cinematic universe” is well-worn in Hollywood these days. And yet, while often imitated, Marvel’s winning formula has yet to be truly replicated. Now, after multiple successful franchises, Marvel has set hero against hero in Captain America: Civil War. 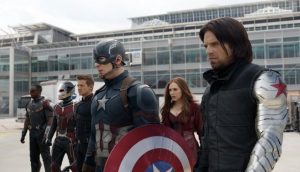 Based loosely upon Mark Millar and Steve McNiven’s Civil War comic miniseries, the story finds the Avengers reeling from a loss (and dealing with fallout from Age of Ultron) that leads to multiple governments enacting some oversight in hopes of limiting the destruction caused by the heroes. Like in the comic series, this causes a rift within the hero community. Iron Man, still feeling guilty over his role in the whole “Ultron thing”, quickly agrees to the terms. Captain America, knowing a bit about following blindly, takes umbrage at the idea that the United Nations gets to decide who the team’s enemies are. What starts as tension between the team members launches into a full-on fight as Bucky “The Winter Soldier” Barnes eneters the story, still on the run after the last Cap movie.

After the sides are established, the other Avengers (and a few new additions) quickly fall into formation between the fractured team’s leaders. The film collects heroes from many past Marvel movies as well as introduces some new (and incredibly memorable) faces. It’s easy to get caught up in the sheer number of characters, but few people seem to be discussing the characterizations. These aren’t just lip-service additions to the plot or pointless cameos. Every character brought in has something value to contribute to the overall story. A team-centered, effects heavy, summer blockbuster has never felt so cohesive.

What I find to be the most interesting aspect of the film, is how much it diverges from the comic series and how much that works to the films favor. The comic was about superhero registration (essentially an expansion of the Mutant Registration Act from the X-Men) and how that would force heroes to become SHIELD foot soldiers. Tony Stark’s stance in the comic series has been heavily criticized over the years. Aside from the fact that he doesn’t have the same personal stake within the story that the film gives him, he makes decisions that are bordering on psychopath territory (like hiring murderous super-villains to hunt down his former friends). The film gives him a logical and well-developed reason for his decision and as it progresses, the deep-seated underpinnings for why he feels the way he does become even clearer. 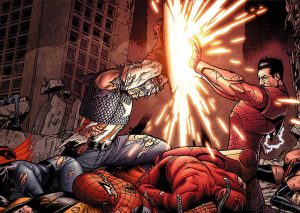 The film also scales down the degree of which the law would effect the heroes. This is partly a result of Marvel not having all of the rights to their extended base of characters in film and partly due to sticking mostly to characters that have already been introduced. This is another change that works incredibly well. Instead of armies of heroes coming to blows, the sides are smaller which inadvertently raises the stakes. We, as the audience, aren’t watching unknown or unfamiliar heroes duke it out. We’re watching people that we’ve invested time with. To an extent, Marvel’s cinematic heroes feel like a family. Seeing them fight has a distinct feeling of unease. Regardless of the fact that the fights look amazing and there is humor peppered throughout, there’s still an underlying unease that only works because it’s been slowly earned since day one.

I don’t want to compare it to the other recent cinematic grudge match, Batman V Superman: Dawn of Justice, because the two movies are really nothing alike. However, the proximity of their release dates and “hero vs. hero” overviews invite comparison. As such, I’ll only say that this film is seemingly the antithesis of DC’s attempt. Let’s just say there’s a reason one has been universally reviled while the other is getting some of the best reviews of the year.

I’m trying to avoid any major spoilers or even character beats because this film is such an experience. It deserves to be seen on the big screen. It demands to be discussed and debated before and after. Marvel has set a high watermark for this one. But with their track record, it’s just a matter of time before they surpass it.