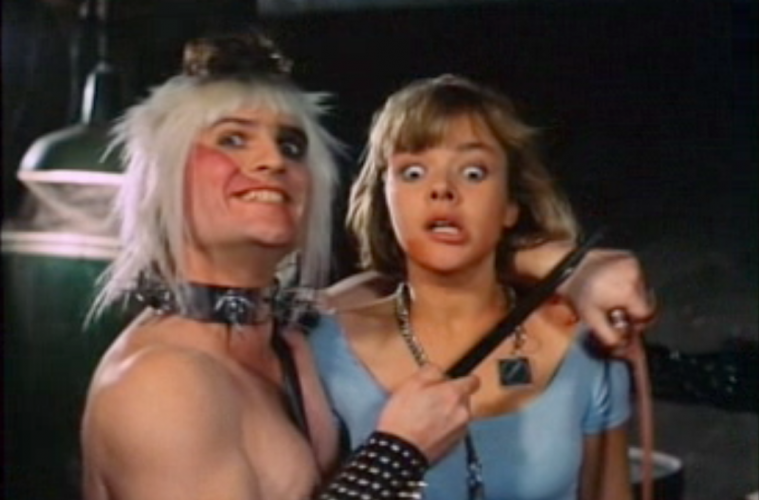 Pack your backpacks and travel through time, as El Rey Network takes you on a journey to Tromaville High School for a good old fashioned mutant takeover in the timeless classic of readin’, writin’ and radiation, CLASS OF NUKE ‘EM HIGH. The pupils of Tromaville High begin developing strange mutations on Saturday June 25 at 6:00 AM ET/PT, and remain in session for the cyborg-teacher takeover in CLASS OF 1999 until Sunday, June 26 at 3:00 AM ET/PT. School may be out, but all mayhem will get shut down by the undercover teacher mercenaries featured in THE SUBSTITUTE 1-4. Slimy monsters stalking the hallways, out of control teaching machines, AND bad-ass revenge-seeking substitutes? Sounds like our kind of weekend!

This is the first time the CLASS OF NUKE ‘EM HIGH will be reading, writing and radiating on El Rey Network, so you won’t want to miss the blend of humor and horror to come!

CLASS OF NUKE ‘EM HIGH (1986) 6:00 am ET/PT
The students of Tromaville High School, begin to develop a Troma-green glow after buying contaminated drugs from a worker of the nearby Nuclear power plant. Mutant take-over ensues.

CLASS OF NUKE ‘EM HIGH 3- THE GOOD, THE BAD AND THE SUBHUMANOID
9:30am ET/PT
The Tromaville student body is in danger again… and it’s not of flunking. Tromaville is under attack from a subhumanoid army led by the evil Dr. Slag and his perfectly proportioned partner Professor Holt.

CLASS OF 1999 11:30am ET/PT
Robot teachers have been secretly placed in the schools where the students have run riot. The teachers do a good job of controlling the unruly youngsters, until they go too far and some students get suspicious.

CLASS OF 1999 2 1:30pm ET/PT
In the original movie, the cyborg-teachers were all destroyed. Well that’s what we thought, but there’s one more rogue military robot out there determined to clean up the education system.

THE SUBSTITUTE 3:30pm ET/PT
After a botched mission in Cuba, professional mercenary Shale and his crew Joey Six, Hollan, Rem, and Wellman head home to Miami, Florida, where Shale is reunited with his fiancé who is a history teacher at a high school. When Shale’s fiancé is hurt by an alleged gang at the high school, Shale goes undercover as a substitute teacher to uncover the crime.

THE SUBSTITUTE 2: SCHOOLS OUT 6:00pm ET/PT
Karl, a professional mercenary, poses as history teacher to replace his brother at the high-school and investigate his death. Karl also teams up with the also mercenary Joey Six to investigate the gang The Brotherhood that is blamed for the murder.

THE SUBSTITUTE 3: WINNER TAKES ALL 8:00pm ET/PT
At a college visit to a war buddy’s professor daughter, mercenary Treat Williams finds her brutally beaten. He then poses as a teacher to teach a lesson to the football jocks responsible.

THE SUBSTITUTE: FAILURE IS NOT AN OPTION 10:00pm ET/PT
An undercover policeman must infiltrate a military school’s faculty to cease the actions of white supremacists.