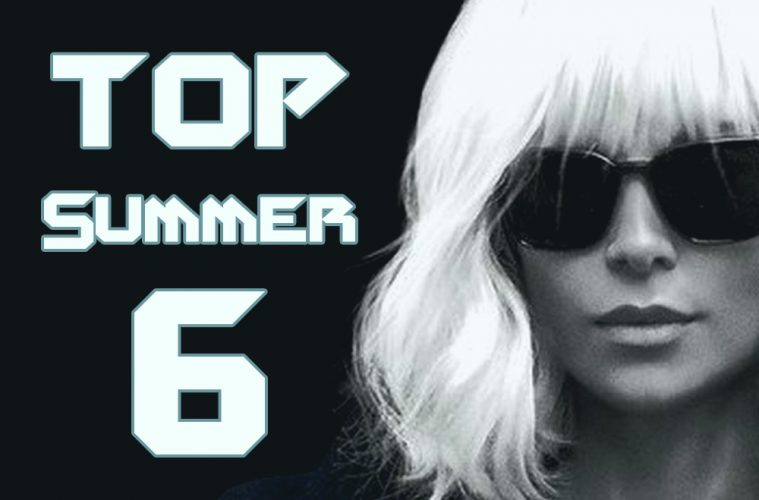 So many, in fact, we’ve decided to put a list of our top six together for you. So grab that spritzer and keep cool, it’s time for some heat.

6. KING ARTHUR: LEGEND OF THE SWORD

King Arthur has had many re-tellings. So many that maybe it’s time for a version with more attitude.

Charlie Hunnam (Pacific Rim) plays Arthur this time – a man denied his birthright as king by the warlord named Vortigern (Jude Law). One day Arthur pulls the sword Excalibur from its stone and begins to clearly see his place in history.

This all may sound painfully familiar at first, but director Guy Ritchie seems hellbent on giving Arthur’s legend a kinetic, metal as fuck makeover. If anyone can be given the benefit of the doubt to do exactly that, it’s the director of Snatch, Lock, Stock, and Two Smoking Barrels, and Revolver.

The trailer’s shower scene aside, it’ll be a cold day in hell before I miss an Alien film. I would be down to see Covenant even if it was a direct sequel to Resurrection.

Doesn’t mean I’d like it, and I’m honestly not sure I’ll like this one either. After taking a nosedive off the philosophical deep end that was style over substance in Prometheus, Ridley Scott seems more intent on delivering a franchise installment in the vein of Aliens, a crowd-pleaser with actual xenomorphs.

The basic plot is a ship crewed by couples and a robot are on a mission to found the first deep space colony. At first, their destination appears to be a beautiful paradise, ripe for harvesting a future… then they realize it’s actually hell.

The working title was Alien: Paradise Lost and it’s rumored that the true origins of the xenomorph will be revealed. Like I said, not sure how I feel about it, but I am going to see it.

4. WAR FOR THE PLANET OF THE APES

Planet of the Apes is a title I’ve never felt much interest for. The old Charleton Heston films are admittedly classic, but incredibly goofy. In my opinion, despite the decades between them, Tim Burton’s 2001 rendition was almost just as hokey.

However, the new Apes trilogy has been a pleasant surprise. Instead of settling for a quick cash-grab reboot, the first two films tell an origin story, laying the foundation for how the monkeys began to evolve into a more intelligent species.

The third and final movie will pit the chimpanzee Caesar, now the leader of the Ape forces, against The Colonel (Woody Harrelson), a crazy skinhead militant, hellbent on restoring humanity to its rightful place on the food chain.

According to the director and screenwriter, they drew a lot of inspiration from old war and bible epic films, and I think it shows. War for the Planet of the Apes looks like, well, an all out war film, and I’m ok with that.

There is definitely a pattern here with some of my selections. One that really just wants potentially great directors to make their own comeback trail.

Valerian is no exception. Directed by visualist Luc Besson (Leon The Professional), Valerian is based on a French comic series of the same name. Also, I secretly suspect the comic was the driving inspiration for one of Besson’s most well-known films, The Fifth Element. If I’m right, this may be the sequel that you never knew you wanted.

One look at the trailer for Valerian and you can tell this is bound to be an eye-popping experience with plenty of stopovers on exotic planets with creatures of all shapes and sizes. Besson is known for his narrative brevity, so expect a breezy popcorn flick with tons of imagination and style.

After Hot Fuzz and Scott Pilgrim, you’d be a fool to question director Edgar Wright’s ability to craft an action sequence.

Baby Driver sees Ansel Elgort being coerced by Kevin Spacey (win!) to be the wheelman for an impossible heist (as if there is any other kind). Elgort and Spacey are supported by the likes of Jamie Foxx (win!), John Hamm (win!), Eiza González (yum!), and Jon Bernthal (Punisher!), in a film that will no doubt make use of Wright’s fondness for sight gags.

Basically, this film has a really strong cast and is helmed by a very clever director. So clever that his recent string of career bumps, aren’t enough to make me shy away from this heist flick.

Bathed in deep, blacklight blues and magenta kickers, Charlize Theron is Atomic Blonde (aka John Chick: Chapter One), a MI6 agent sent to Berlin in 1989, the tail end of the cold war.

The hyper-stylized lighting isn’t the only thing Blonde has in common with John Wick. It’s also violent. Very violent.

The trailer dedicates a precious 30 seconds to displaying the raw ferocity in the stunt work and fight choreography. The camera doesn’t cut away from it at anytime either, immediately placing Blonde several notches above films where shaky cams saves the actor-can’t-really-do-any-of-this day.

The attitude doesn’t end with the gritty brawls either. The fan service here is unapologetic, showcasing Theron in lingerie and getting honey-potted by a female French double-agent.

All around, looks like an action movie worthy of its solid R rating. I’m looking forward to it.

Did we miss any? Let us know in the comments below.