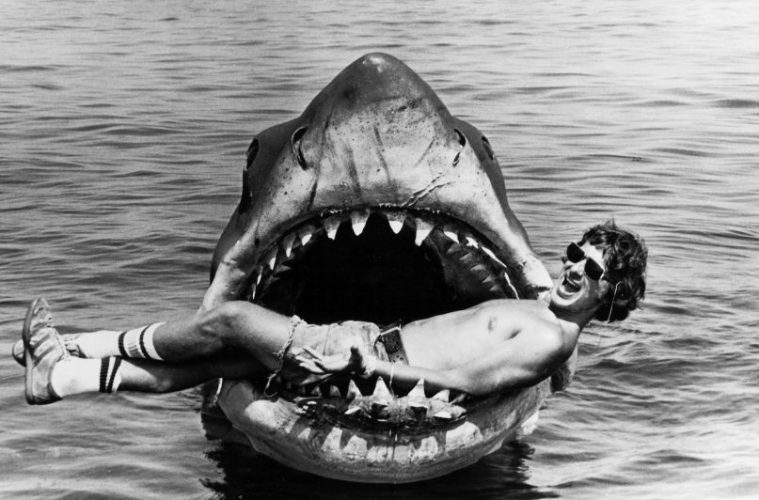 42 years ago this week, one of the great thrillers in cinema history premiered – and changed movie history forever.

At that time, Hollywood routinely premiered a film in a dozen theaters across the entire country, the film slowly rolling out to theaters over weeks and even months. 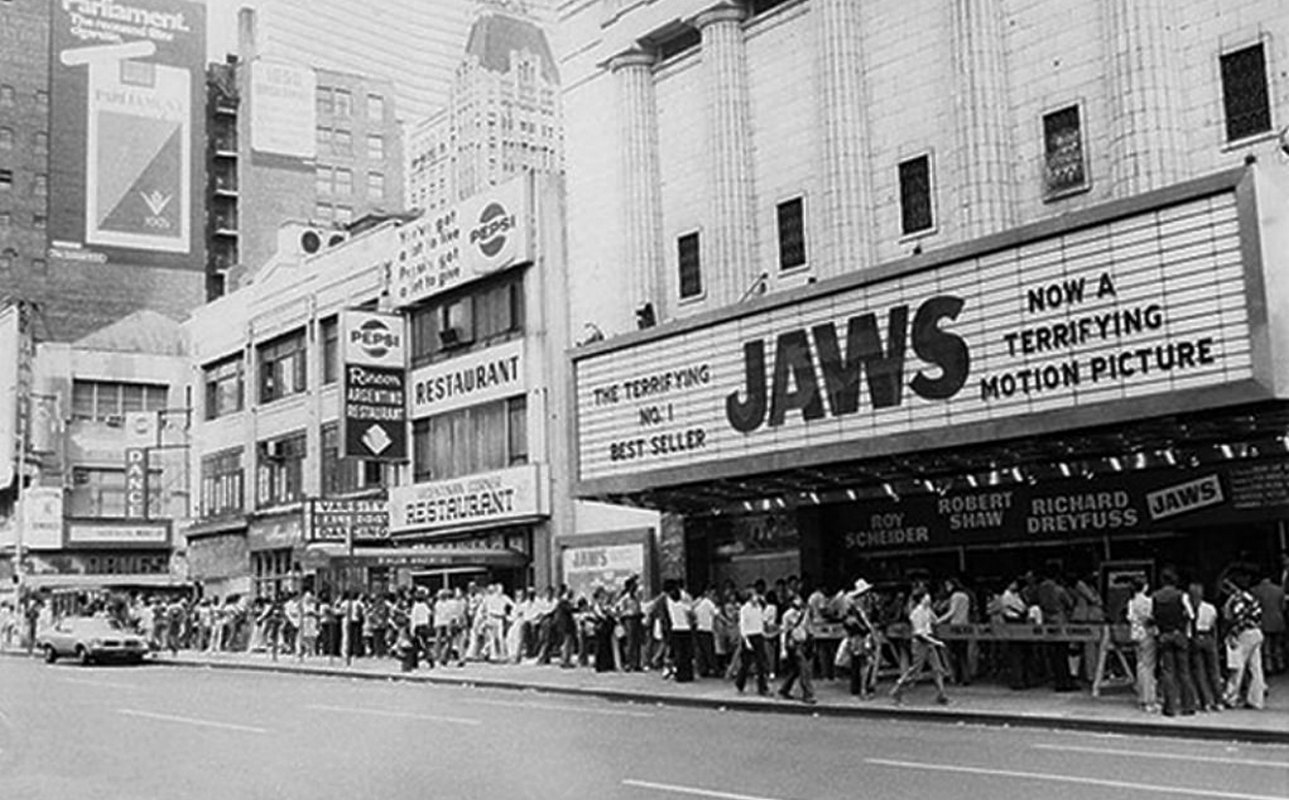 But on June 20, 1975, Universal sent this big fish out to a thousand theaters on the same day – and the way films were released changed forever.

Here are five great reasons to celebrate this shark tale: 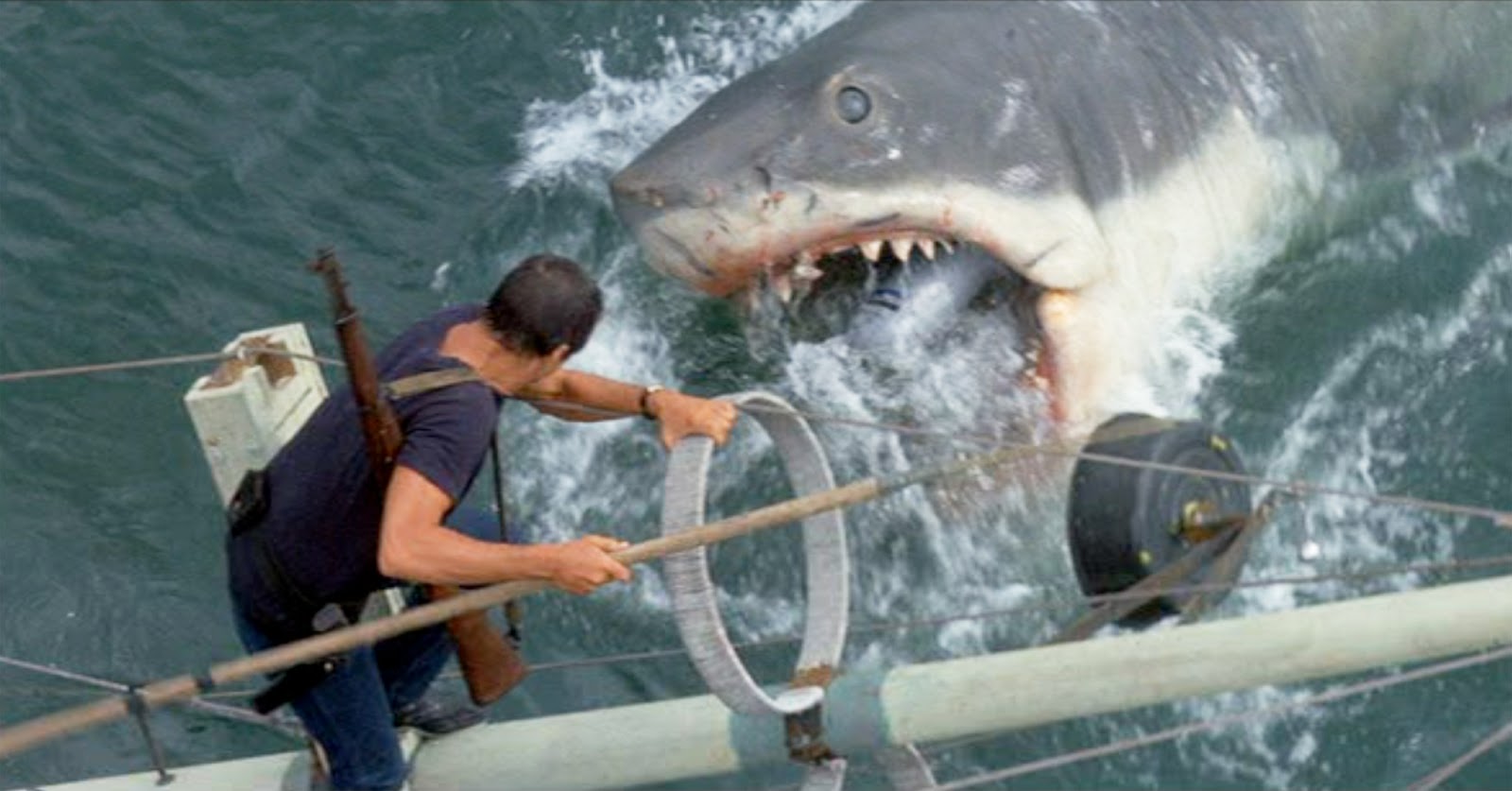 The stories that “Bruce”, the mechanical shark, was notoriously difficult to work with are now legendary. Yes, he was named “Bruce” after Director Steven Spielberg’s lawyer. Three mechanical sharks were built to play the part of the great white: a “left” and “right” shark for side shots, and a full-sized one for the straight on shots. 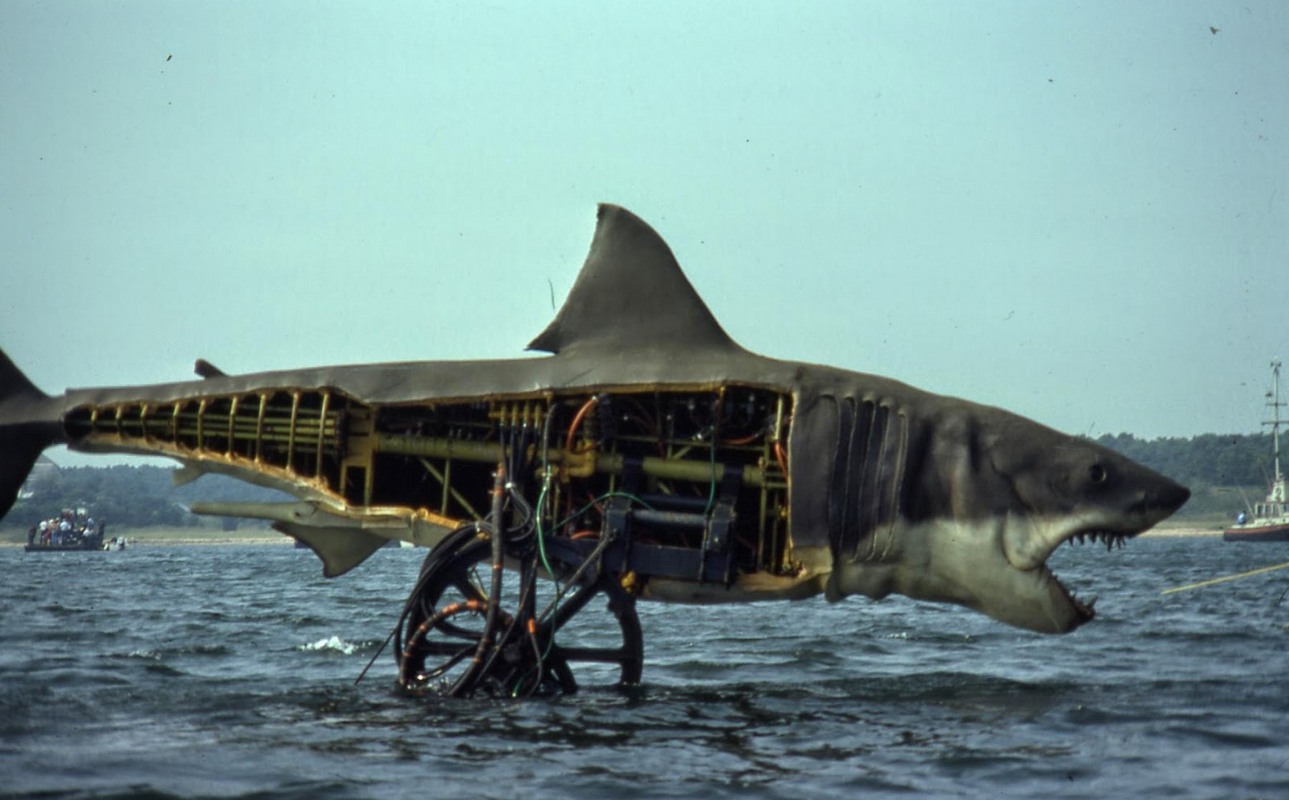 However, since “Bruce” malfunctioned so much, Spielberg filmed most of the movie’s scenes without him. In fact, the first shark doesn’t appear in Jaws until more than an hour and twenty minutes have gone by. 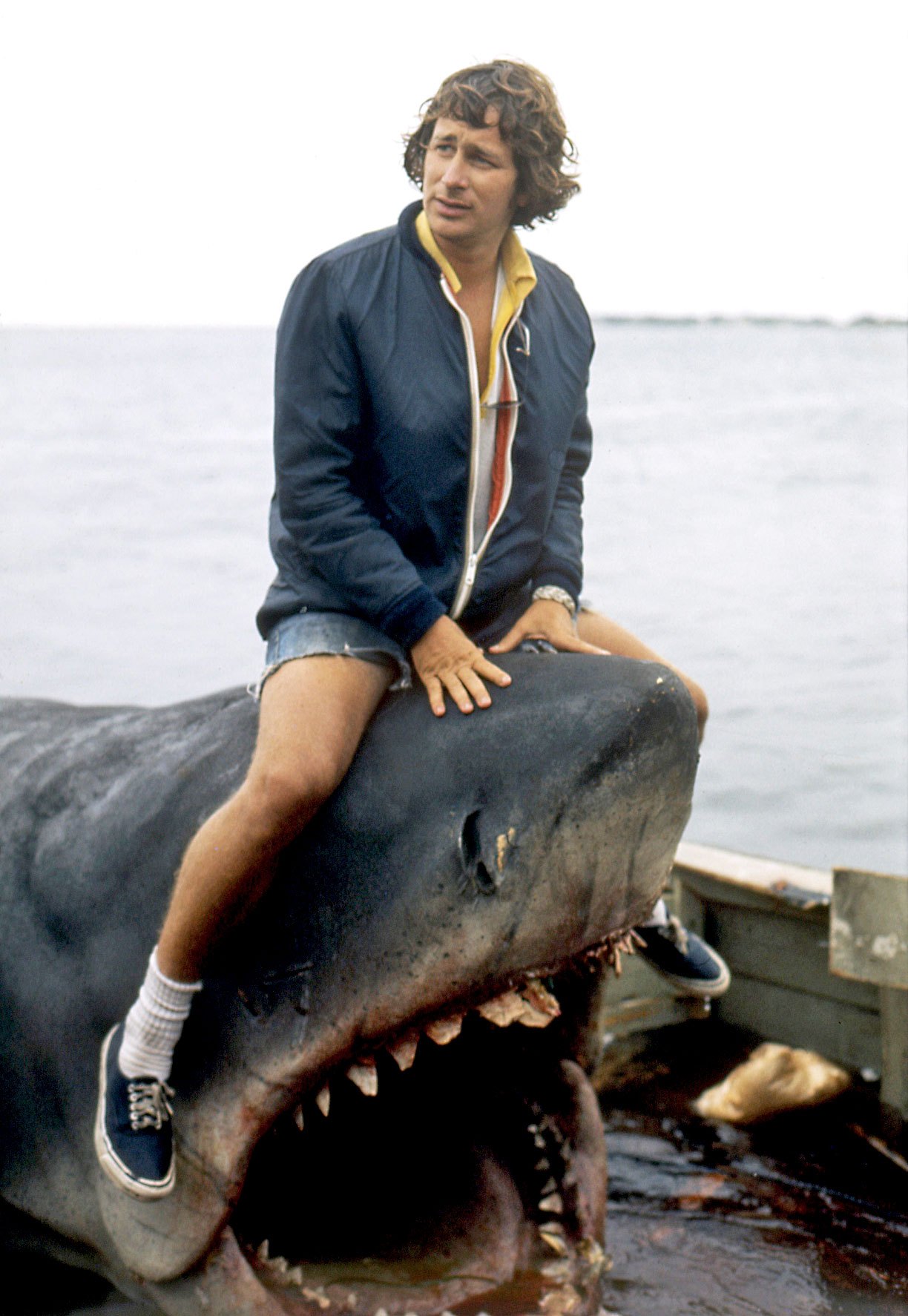 Although principal photography was scheduled to take 55 days, it took 159 days. Spielberg, reflecting on the protracted shoot, stated, “I thought my career as a filmmaker was over. I heard rumors … that I would never work again because no one had ever taken a film 100 days over schedule.”

Here’s another reason to love Jaws:

The acting in Jaws is stellar: Roy Scheider as the Sheriff trying to keep tourists safe; Richard Dreyfus as the shark expert who wants everyone to show more respect toward their prey; and of course Robert Shaw, as the crusty “shark killer” who one night tells the morbid story of his WW2 buddies being eaten by sharks after their ship was capsized during battle. 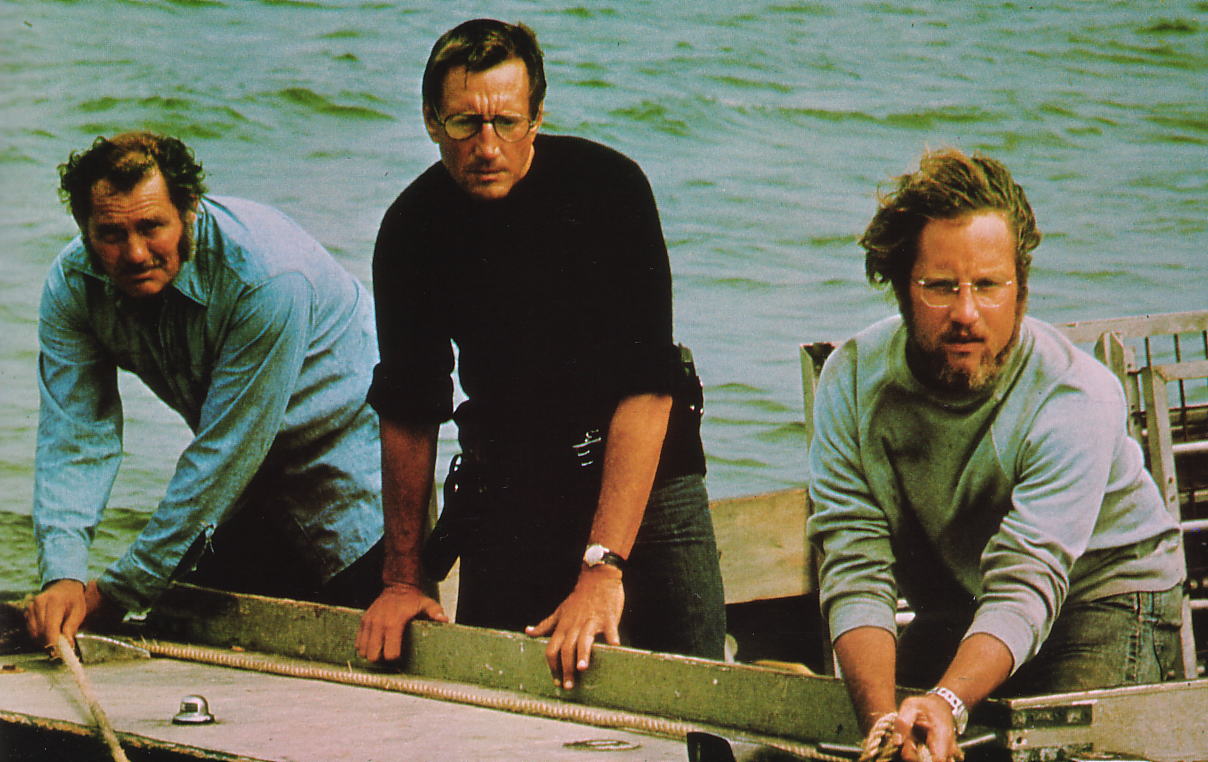 However, one line in the film has become legend – and Scheider improvised it! As the trio are searching for Bruce in their fishing vessel, it’s the Sheriff who suddenly finds himself face-to-face with the great white.

Without missing a beat, he turns to the other two and utters the immortal line:

Of course, audio also plays a huge role in the film… 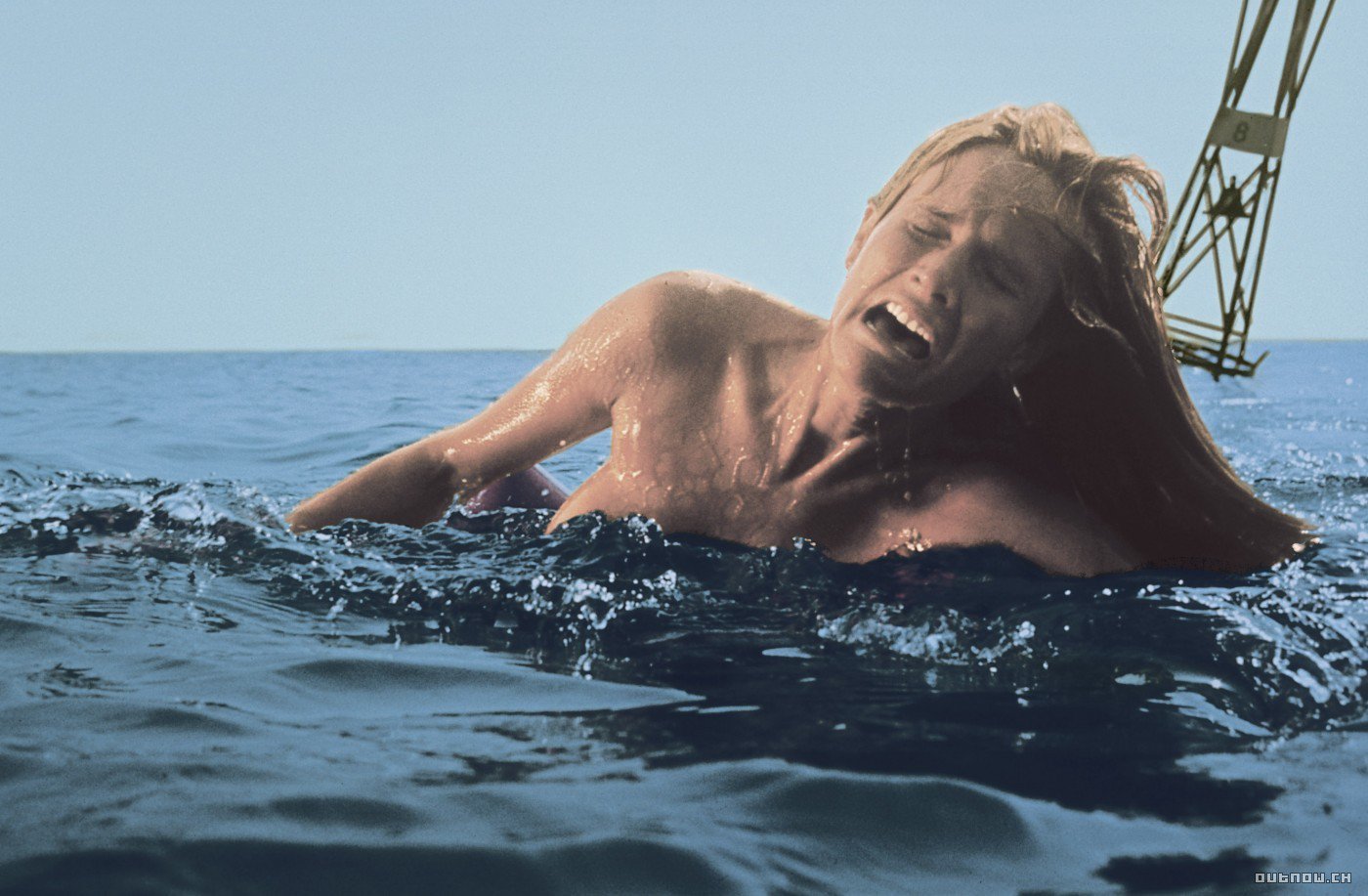 However, apparently the first time Spielberg heard John William’s opening track, he thought it was TOO simplistic. Obviously, he changed his mind and it is now one of the most iconic scores in film history.

Another reason this film is a classic is pure visual… 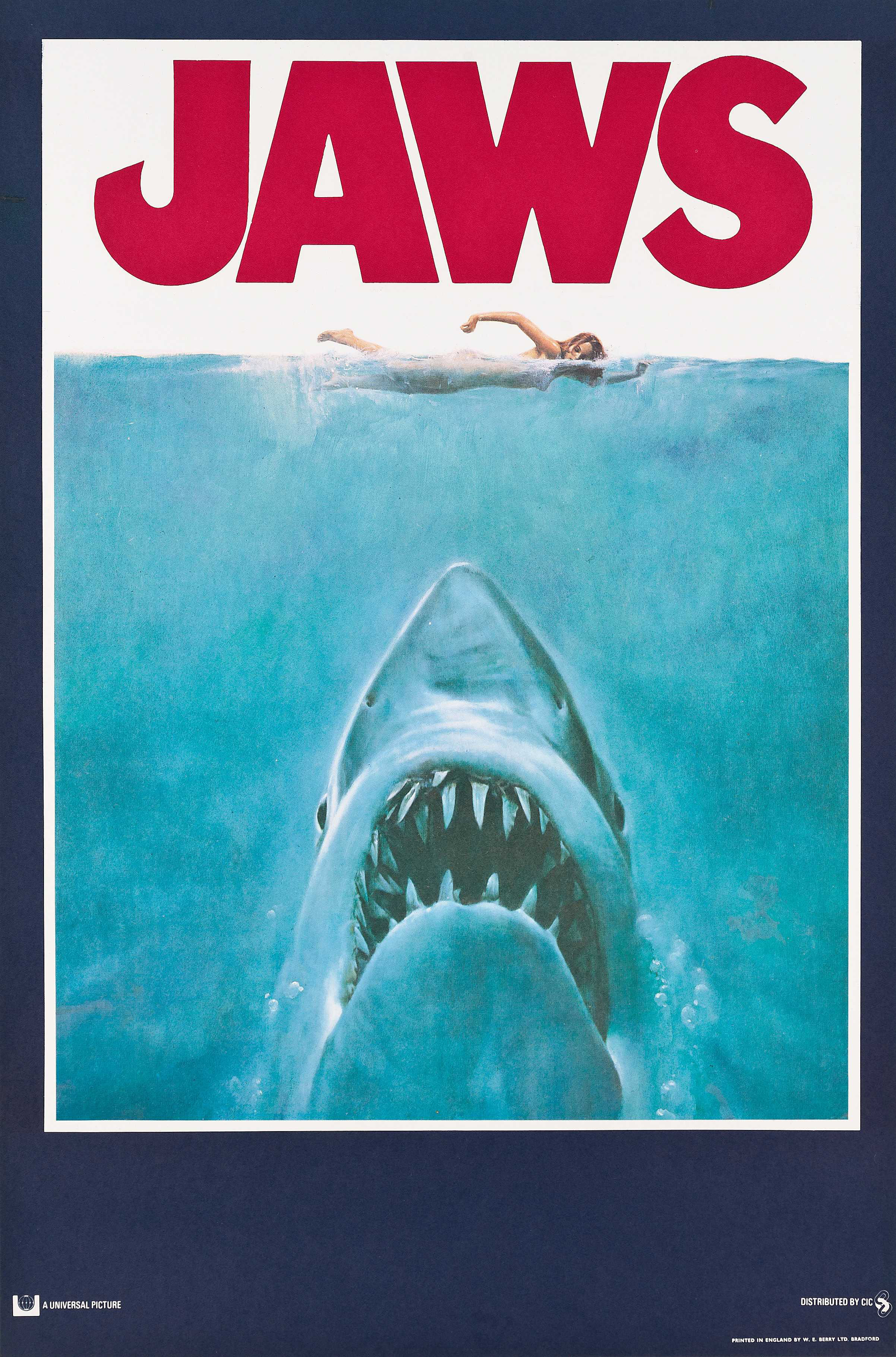 This simple, iconic movie poster says it all: there is something evil on the way, and you won’t see it until it’s too late. It is one of the most iconic images of all time.

Artist Roger Kastel designed the poster, and according to a website filled with Jaws trivia, the swimmer in the poster was a model that Kastel had been sketching for another ad he was working on. The artist asked her to pose on a stool like she was swimming, and that is the image he captured.

Now, 42 years later, here is the real reason that “Jaws” remains one of the greatest films of our generation: 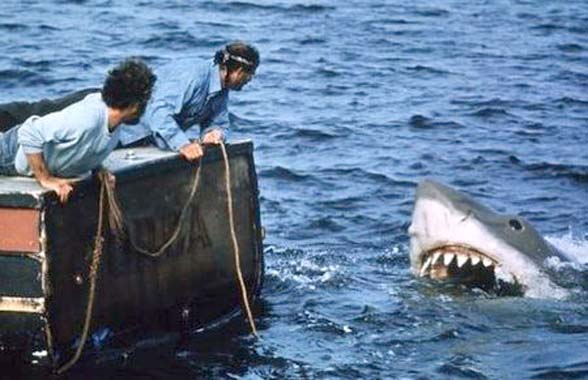 Everyone knows now that Jaws is a classic suspense thriller – but in 1975, the trailer for the film ushered in an entirely new way to promote a film as well.

Jaws was the beginning of a new era in blockbuster cinema – a larger-than-life film-going experience that needed to be seen with a large group – making it even more terrifying in a theater.

Bravo to 42 years of Bruce terrorizing audiences – here is the original trailer: