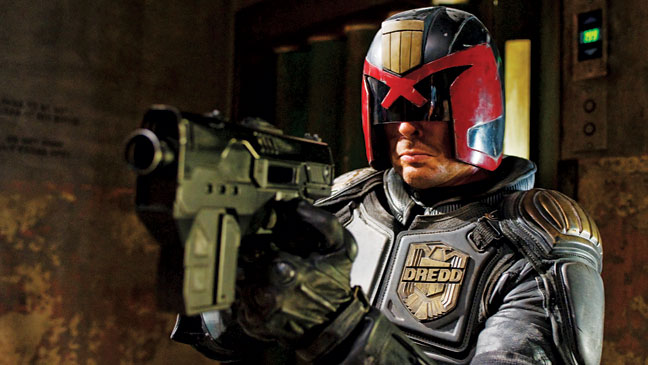 Judge Dredd first hit cinema screens in 1995, with the much criticized Sylvester Stallone blockbuster. While it made a lot of money, it was panned by both critics and fans. Fans especially disliked it for several reasons, with the top annoyance being that Dredd’s entire face should not have been shown. While sometimes shown in various profiles without his helmet in the comic books, his face had never been seen, keeping a great mystery among readers. I personally have never read the comics and I absolutely adore Stallone’s movie. I love its fun, the spectacular action scenes and the brilliant story of a feared and incorruptable lawman who finds himself a target of his own police department when he is framed for murder. Stallone shines as Dredd, it’s one of his greatest movies, in my opinion. But in 2012, Dredd got a second outing on screen, with Karl Urban now taking over the legendary role.

With Urban remaining fully masked for the entire movie, and the funny criminal sidekick replaced with a female rookie, the new Dredd sought to give fans what they desired. And while some still balked at the finished product, most audiences responded to it with great love. And as someone who has loved the Sylvester Stallone movie since childhood, I found myself loving the new movie very much too. Where the two differ for me is that the 2012 movie doesn’t feature much of an exciting story. A druglord in an appartment block orders her army of criminals to kill Dredd when he and his rookie partner are sent to arrest her. The Raid anyone? While Stallone’s movie may not be wholly original, the notion of a loyal police officer framed for murder is always very exciting. Movies like Schwarzenegger’s Eraser and Stallone’s own Tango And Cash (with Kurt Russell) cover the same ground. But it’s always a fun story to see unfold.

But although Dredd doesn’t have the story the first movie has, there can be no doubt that it’s one of the greatest action movies of the 21st century. Packed with spectacular shootouts and fantastic special effects, Dredd is a stunning movie from start to finish. And while Stallone’s Judge Dredd had some gruesome moments, Dredd is determined to go all-out with a massive body count and enough blood to fill three horror movies. And Karl Urban does a wonderful job playing the iconic hero, with a great strength in every area that makes Dredd great. The tough walk, the awesome voice and the ability to murder ass, he’s got it all. I personally do prefer Stallone and his movie, for the story, the action and to hear Stallone yell “I AM THE LAW!”. And the 1995 movie also features one of my all-time favorite movie songs – Dredd Song, by The Cure. But 2012’s Dredd is a wonderful movie that makes every effort to please fans of the comic books and regular action movie fans. I want Dredd 2. And so does almost everyone else.

Here is an awesome video celebrating the total mayhem and violence of Dredd. It’s funny when you see a movie wrapped up in four minutes, it really gives you a kick to the guts when you see all of this power in one video. Enjoy.