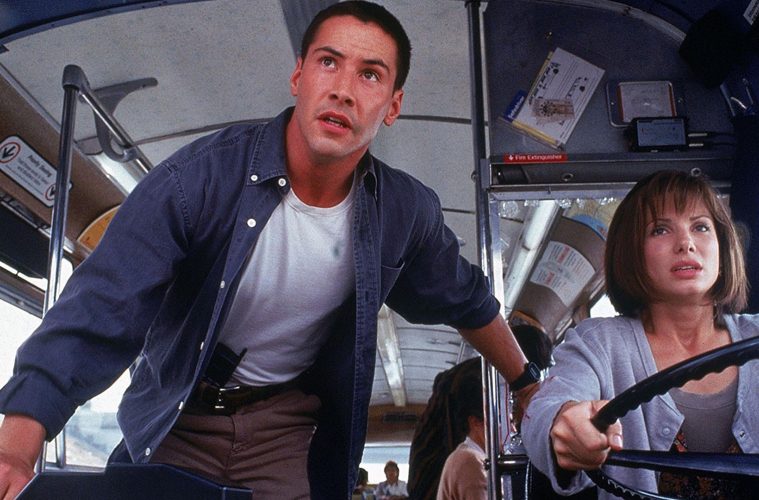 LAPD Officer and bomb squad technician, Jack Traven (Keanu Reeves) has just boarded a city bus in motion by jumping on from a now-totaled Jaguar. The driver of the bus has been shot and a passenger named Annie (Sandra Bullock) is struggling to maintain control of the speeding behemoth. She is trying to get the drivers’ foot off the gas pedal when Jack shouts: “You slow down and this bus will explode! There is a bomb on this bus. If we drop below 50 it’ll blow. If anybody tries to get off, it’ll explode.”

Speed (dir. Jan de Bont) probably has the greatest premise of any single action movie that has ever existed. It is simultaneously ludicrous and also highly relatable. Anybody who has ever taken public transportation or even been in a confined space with several other people can imagine the immediate horror a terrorist threat would cause. Living in a post-9/11 world is to be constantly plagued by such anxiety. But Speed comes to us from the mid-nineties, an era where elaborate bomb threats could be the plot points of high-concept action flicks and not a latent fear.

If the premise alone doesn’t get you pumped to watch this movie then nothing else I write here will matter. That’s of course assuming you, a proud AAGG-er, haven’t seen it. No judgement, but I don’t know what you could possibly be waiting for! Consider this your invitation to partake in a film that is the epitome of classic 90’s cool. The action scenes are over the top, the dialogue is way too snappy for its own good (likely owing to a Joss Whedon punch up of Graham Yost’s original screenplay) and the thrills are non-stop. I guess what I’m saying is I’m a huge fan of this movie and even though I said I make no judgements about you for not seeing it, I probably kind of do.

Speed is a cat and mouse thriller in three acts, a battle of wits between a mad bomber (Dennis Hopper) and our hero, Jack. The film is divided into three distinct set pieces, the first takes place on a crowded elevator, the second on the iconic bus and the final showdown happens in and on top of a subway car. The bomber ransoms the citizens of Los Angeles with his ridiculously intricate bomb threats and Jack tries to keep everything from exploding with varying degrees of success.

The films’ unique plot structure is fascinating. It’s like a three-episode novella or limited-run tv show; sort of a proto-24 that depicts the increasing stakes of the chess game between Jack and the bomber. Breaking the film up in this way keeps each segment feeling fresh and revisiting the film never feels like a slog because there are never any doldrums. As soon as one set piece nears its exciting conclusion the next starts revving up. You know how you watch an action movie for the umpteenth time and begin to dread the downtime between the action sequences? (The Matrix is a good one for this). That’s not the case here because something exciting, funny or cringey-cool is always happening on screen.

Delivering on its silly premise are some really great action sequences that are fantastically performed and shot. Ever wanted to see a bus fly through the air? The producers of this film did and there it is, just as silly as it should be. Bus leaning on two wheels as it rounds a 90 degree turn? Got ya covered. Keanu Reeves attempting to diffuse the bus bomb by wheeling under it while it’s still in motion? You know it’s there. It’s also important to remember that these are PRACTICAL EFFECTS! Very little CGI here, guys. (Some visual touchups but all of the explosions and vehicular stunts were done with real equipment or miniatures.) It feels real in a way that big action spectacles just don’t these days and that is to be appreciated.

Also enjoyable is Jack Traven as a character. The cynical might refer to this film as Die Hard on a Bus and Jack as a Gen-X John McClane but Speed transcends that label and Jack has his own distinctive personality quirks.

For one, Jack is an extremely serious cat, all business. He barely cracks a smile throughout the film and is godawful at quipping. Unlike John McClane, a world-weary washout, Jack Traven is a young hotshot on the force with a lot to prove. As such, his bravado seems more like a thin coat of “fake it ‘til you make it” than the grizzled “I’m too old for this shit” that we usually get with these types of characters.

What’s more, Jack is fully reliant on his support team and especially his mentor/partner Harry (Jeff Daniels). He utilizes all of the resources at his disposal rather than going it alone. Yes, Jack is the point man on the bus, but stopping the mad bomber is ultimately a team effort.

One thing that McClane and Traven have in common is an undeniable gut instinct. Jack might not be a man of words, but he is a man of action, able to utilize that gut to suss out suspicious situations and then apply exactly one problem solving method:

SPEED IT THE HELL UP.

Hostage standoff taking too long? Shoot the hostage in the leg to “…remove him from the equation.” Gap in the freeway? “Floor it! It’s an interchange” Runaway subway car? There’s a curve coming up. You know what to do.

Does it ever make sense? Decidedly no, but gosh darn if it isn’t fun as hell. 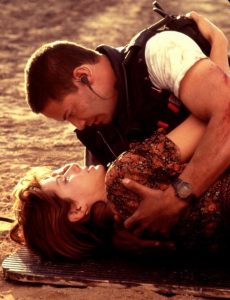 It really makes Jack the perfect character for this story and he is so fun to watch. Keanu was only a few years out from his Bill and Ted days at this point and he seems very eager to prove himself as an action-hero. To be more than a pretty face with a surfer-dude speech pattern. He also has wonderful chemistry with Sandra Bullock, whose star really took off after this film. She brings a unique blend of warmth and quirkiness to what could have been a fairly by-the-numbers damsel in distress performance. Maybe it’s the crush on her I developed while watching this movie as a ten-year-old talking but I still think their relationship is big reason why this film is so enjoyable.

Of course, a discussion of this film would not be complete without a nod towards the gleeful scene-chewing that Dennis Hopper’s brings to the mad bomber. Another cue taken from Die Hard is the employ of a charismatic villain but in a twist on the original formula it is he and not our hero who is working alone, using his evil genius to terrorize the citizenry and outfox the police. Foiling Reeve’s young hotshot with a crazy old man is an interesting choice and gives the duo a sort of father/son or mentor/mentee dynamic that mirrors the relationship that Jack has with Daniels’ Harry.

If you’ll allow me to get pretentious for a sec, in this way the film could be seen as a comment on the tumultuous relationships that young men can have with their fathers. Fathers can disappoint you, abandon you, hurt you or even hold a bunch of people for ransom on a speeding deathtrap. Ultimately all young people, Jack Traven included, have to learn to stand on their own. Maybe that’s the message of Speed. It most likely isn’t but it’s fun to extrapolate. The reason we can have fun with it is because of the nuance and depth that Hopper brings to his performance. At his core he is a vindictive, old, murderous asshole, but Hopper’s bomber is also extremely intelligent and always teetering between toying with Jack and teaching him his own brand of fatherly life lessons.

Jeff Daniels’ Harry is far more conventional surrogate father. At the start of the film he is giving him pop quizzes on hostage situations and imparting sagely advice. He is respectful and supportive of Jack while doing his best to reign in an officer who could very easily spiral into being a loose canon. Their friendship serves as the emotional core of the film (at least until Annie takes center stage) and it is so because of Daniels’ earnest performance and yet another good chemisty pairing with Keanu.

Also worth mentioning is Mark Mancina’s heart-pumping score! I don’t often pay attention to film scores so when one gets its hooks into me I tend to take notice. When the thumpy drums and somber horns kick this one into gear it just feels perfect. It’s not an iconic theme song by any means but it holds a special place in my heart.

Suffice it to say Speed is one of my favorite action films. It is certainly one of the greatest of the 90’s and very possibly the very best of 1994 (True Lies comes close but loses by a Tom Arnold). It’s cheesy good fun, like a greasy burger from your favorite fast food joint. Very little nutritional value but ah the memories…

Too bad they never made a sequel.*

*The author wishes to note that he does not acknowledge the existence of sequels he does not personally enjoy. **

**Kind of like how they stopped making Die Hard movies after With A Vengeance, but that’s another article for another day…