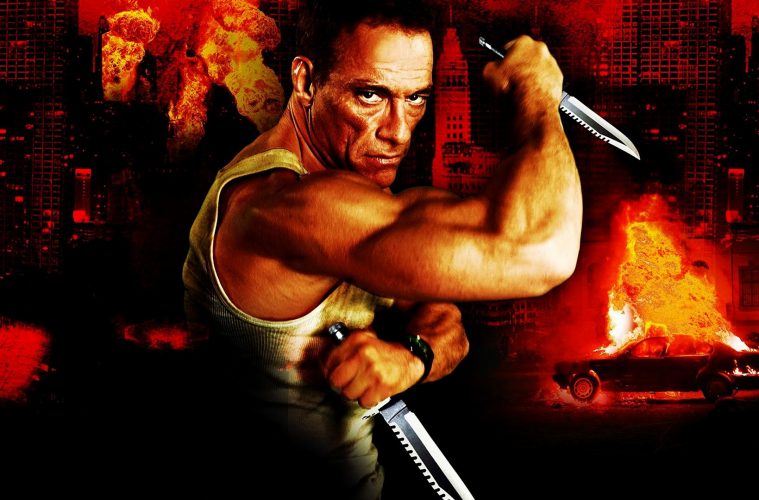 To people of a certain age, the names Arnold Schwarzenegger, Sylvester Stallone, Bruce Willis, Kurt Russell, Steven Seagal and Jackie Chan send shivers of excitement down the spine. Titans of 1980s-1990s action. The biggest stars in the world. The go-to guys when we need to escape the world we’re living in and watch our favorite heroes save the day in theirs. While Arnie and Sly remain iconic for all time, there is another name that belongs between them. A man who needs no introduction – The legend that is Jean-Claude Van Damme.

Throughout the years, Van Damme has brought us action fans an unlimited level of jaw-dropping action movies, with a wide range of genres – Thriller, horror, comedy, sci-fi, war, romance and of course martial arts. Of late, the great man may not feature at your local Cineplex often, if at all. But you must never forget the days when Van Damme ruled action cinema alongside Schwarzenegger and Stallone. So to celebrate the awesome classic movies of the one and only Jean-Claude Van Damme, here are the 5 most awesome movies from the Muscles From Brussels.

Based on the TimeCop comic book, Van Damme stars as Max Walker, a time-travelling police officer who sets out on a deadly mission 10 years back in time to prevent the murder of his wife and to bring down her killer, a senator who will become the world’s most powerful man – The President of the United States of America.

Anyone around in 1994 cannot forget how big this movie was. Especially its video campaign, which made Timecop one of the biggest earners in that year. Loved by the public and Van Damme fans, Timecop is riddled with stunning action scenes, brilliant special effects and the great humor we expect from Van Damme. And the movie’s villain is played perfectly by the late great Ron Silver, who delivers many of the movie’s best moments as he takes on the hero until the epic finale. With the legendary Sam Raimi as a producer, Timecop is without a doubt one of the best comic book movies you’ll see.

What’s better than 1 Van Damme? 2 Van Dammes! Van Damme takes on his first duel role as twin brothers Chad and Alex, separated as babies, but brought back together as they discover that their parents were brutally murdered by a Hong Kong crime boss. Hellbent on revenge, the newly paired brothers must work together to bring down the vicious criminal and his gang of many, in a ballet of blood, kicks, and bullets.

Double Impact is vintage 1990s action. Taking a major action star and having him play two ass-kicking roles in one movie was unheard of back then. Giving us not one awesome Van Damme hero, but two. And it showed off Van Damme’s skills as a movie star, playing two completely different roles – One a yoga instructor brought up in New York City, the other a hardened criminal fending for himself in Hong Kong. Both brothers are immense fun and the supporting cast of Geoffrey Lewis, Philip Chan, Bolo Yeung and Alonna Shaw are all brilliant. Alonna Shaw especially is fun, playing the girlfriend of jealous Alex, who fears her falling for his kinder nicer twin brother. A fun side plot with an amazing fantasy scene thrown in just for kicks. Double Impact is action-packed, funny and sexy as hell. One of the best action movies of the 90s.

Van Damme stars in legendary action filmmaker John Woo’s American movie as Chance Boudreaux, a homeless war veteran who becomes the latest target in an underground hunting competition, led by the brutal Emil Fouchon (Lance Henriksen), while investigating the death of a Vietnam soldier. The prize is unwinnable and the hunters are unbeatable until they finally meet their match with Chance. As the classic tagline goes, don’t hunt what you can’t kill!

John Woo is an immortal legend in action cinema. A man so supremely awesome that it was only a matter of time before Hollywood came calling. While he reached massive success with the incredible action blockbusters Face/Off, Broken Arrow and Mission: Impossible 2, Hard Target remains many people’s favorite Woo American adventure. Guns, bombs, bikes, kicks and a rattlesnake, Hard Target has all the action a fan of the genre could ever ask for. With the mighty Van Damme laying waste to hordes of assassins while constantly throwing out hilarious one-liners and delivering heavy-duty ass-kicking, this is the great man at the top of his game. Hard Target is a true action classic.

Van Damme strikes gold yet again, this time starring as Luc Deveraux, a Vietnam soldier who is murdered in the aftermath of the war by his psychotic Seargent Andrew Scott (The legendary Dolph Lundgren). With both men taking each others’ lives, their bodies are used in a top-secret government project – the regeneration of deceased soldiers for use by the military in deadly missions around the world. But when they are brought back to life, the memories that were erased from their minds also come rushing back, forcing the Vet foes into one final spectacular battle that could rip apart the US government forever.

Universal Soldier is 1990s action at its very best. Two magnificent action stars pitted against each other on-screen, going toe to toe through a series of incredible action scenes, including a fantastic motel shoot up and a blockbuster chase across the Grand Canyon. And having the wonderful Roland Emmerich as director, the man who would go on to give us many action classics including Independence Day and 2012, makes Universal Soldier an even greater thrill ride. Many great sequels followed (including the horribly underrated Universal Soldier: The Return, co-starring the awesome Michael Jai White), but the original always remains a true classic and almost unbeatable in Van Damme’s filmography. Almost…

Van Damme. The man. The hero. The legend. Starring in the most awesome, most action-packed movie of his career. This time, our hero stars as Darren McCord, a former firefighter with a tragic past, who now works as a fire safety officer. But when he brings his children to a spectacular ice hockey championship final and his daughter suddenly goes missing, he discovers that terrorists have seized control of the stadium, rigged the building with bombs and are demanding a billion-dollar ransom be delivered by game’s end. Racing toward the game’s final buzzer, the fireman must take down the terrorists, save his children and stop the deadliest attack on American soil that could claim up to 20,000 lives.

Everyone has their own favorite Van Damme movie. I’ve been a huge fan most of my life and love most of his work. Even a good share of his straight-to-video releases are terrific. But I’ve never loved him more than I do in Sudden Death. Fast, funny, absolutely lethal and at his most human. To see the iconic action star as a broken divorced father-of-two with no money, no future and a son who doesn’t look up to him is so special for someone like Van Damme. But while I enjoy that side, the main event is the action. And sweet God, it’s got some of the greatest action you’ll ever see. The iconic fight with a killer posing as a penguin mascot, the wonderful water pistol demise, the death-defying incredible finale. And all the fantastic martial arts skills and shoot-em-up action we expect from the Muscles from Brussels. Jean-Claude Van Damme is a true action legend, in my opinion second only to Arnold Schwarzenegger. But I’ve never adored him more than I do in Sudden Death. Simply one of the greatest action movies ever made.