STAR TREK INTO DARKNESS review: Face it, Trekkies…this series will continue to live long and prosper with or without you! #STARTREKINTODARKNESS 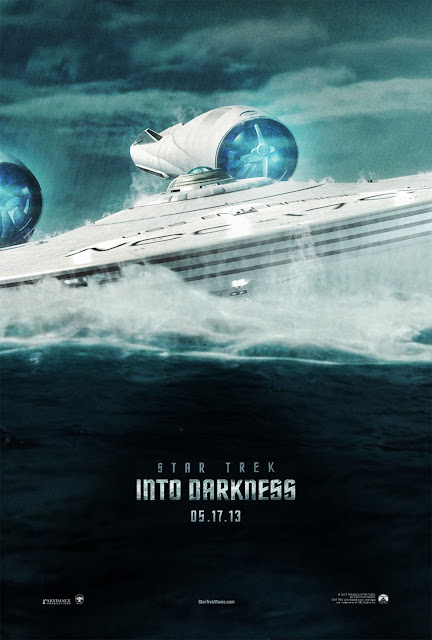 A mass-murdering maniac with apparent super-powers is on the loose in Star Trek Into Darkness. And it appears he has a serious bone to pick with Starfleet. J.J. Abrams’ sequel to his hit 2009 reboot of the Star Trek franchise lives up to it’s title, it is darker, meaner and has a body-count that dwarfs it’s predecessor (excluding the first film’s destruction of Vulcan, that is). That being said, it is a sequel in the truest sense of the word. The battles may be bigger, the stakes may be higher, but at the end of the day, it definitely feels like it is cut from the same cloth that Abrams’ used to great success the first time around.

As far as summer blockbusters go, Into Darkness is among the higher caliber entries. It is smart, slick and fun. Although it doesn’t seek to reinvent the wheel, it serves as a straight-forward continuation of the franchise, which fits with the Star Trek series’ episodic nature.
Chris Pine and Zachary Quinto are, as always, a breath of fresh air. Pine’s quick-witted smart-assery bounces easily off of Quinto’s cool, calculating performance. As the stakes of the film get higher, these two easily hold their own and deliver strong performances when things get real. The rest of the crew of the Enterprise each do well with what they’re given, Simon Pegg in particular really gets a chance to play with his role as Scotty this time, and the results are some of the films’ best comedic moments.
Finally, our maniacal super-villain, John Harrison, played by geek-favorite, Benedict Cumberbatch. Cumberbatch brings his A-game here; cold, steely, ferocious, without ever batting an eye. Unfortunately, after his character really takes center-stage as our antagonist, his role becomes limited to constant yelling and a lot of running. That being said, Cumberbatch effortlessly steals all his scenes during the film’s second act, and his performance is not one to be missed this summer.
The film’s plot, constructed by the familiar team of Kurtzman, Orci and Lindelof, almost edges into the territory of political thrillers. It’s twists and turns are both engaging and entertaining, markedly different from the mostly straight-forward nature from the first installment. Into Darkness is as much a mystery-thriller during it’s first two acts as it is an action flick. The writing team was smart in their decision to move this direction, it keeps the audience thinking on their feet, a rare move these days in the arena of big blockbusters.
Action A Go Go or Action A No No? Action A Go Go!
Star Trek Into Darkness is a big, bombastic summer action movie. It plays it straight, with a few stellar elements here and there to elevate it above the rest of the rabble. It’s funny, it’s intense, it’s cool, just an all around good time. If you’ve got a hankering for another dose of what Abrams’ brought to the table four ears ago, this will definitely do the trick.
I, for one, would love to see this series live a long, full life. Bring on the next sequel!
–Andrew Allen
https://twitter.com/a_b_allen