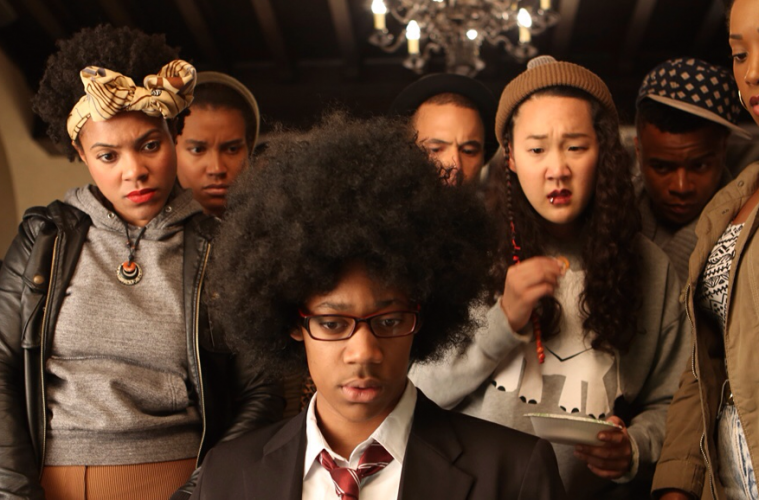 Every so often in cinema there comes a film which busts wide open a conversation traditionally had behind closed doors in muffled tones. But these films are rare. Very rare. Though Hollywood continues its love affair with Oscar-baiting biopics featuring well-documented historical black figures overcoming segregation and slavery, the industry has nary to say on the issue of race that is of any substantial or (keyword) contemporary relevance. Racism in the modern sense is an idea kept at arms length. Social division and racial alienation are made light of and played for laughs in your typical sitcom, but any real discussion of these matters presents a pool of thought too deep for most writers or directors to jump in to. It’s an awkward reality of modern American life, one that film and television have nothing to say about so they, instead, resort to the age-old “laugh the discomfort away” ploy to gloss over the issue. If your only exposure to American culture was through television and movies, you may be convinced that all was right and at peace on the U.S. racial front.

Enter Dear White People. What very well may be the contemporary black film of the Obama-age.

The most striking thing about Dear White People, the debut of writer/director Justin Simien, is the complete fearlessness with which it discusses the racial subtext that permeates the attitudes of America today. Far from the one-dimensional seminar that many presumed it to be, Dear White People skewers the minutia of the black persona and how it fits into a predominantly white culture. Self-hating blacks, militant blacks, alienated blacks, apathetic blacks; none escape Simien’s purpose-driven microscope. Yes, the film is titled Dear White People yet for all intents and purposes it serves primarily as an affectionate letter of sincere concern to the minority youth who find themselves struggling for identity, specifically as they reach early adulthood. There’s something here for everyone, to be sure, but the people that Simien is ultimately addressing are black, contrary to what the title suggests (Simien admits that the title was mostly intending to turn heads and put butts in the seats). That doesn’t, however, make the film’s title inappropriate. Simien’s screenplay recognizes fully that much, if not all of what defines “black” American identity is created in reaction to the pervasive whiteness of the surrounding culture. In a way, every statement of “blackness” in America is a message addressed to the white majority, whether the messenger intends it to be or not. Such a distinction of self-identification need not be made if this weren’t the case. It’s in this zone of reactionary limbo that Dear White People sets into motion it’s humor-infused game of racial politics.

As with many of these culture-blasting films, Dear White People is far from a technically perfect film. It’s nature as a freshman effort will be obvious to even some of the casual viewership. A micro-budget indie pic from a director still in the process of honing his craft. But it’s this very sort of film, free from studio restraint, that is suited to discuss these hot button issues in the uncautioned manner that it does. Even through unrefined editing and occasionally dubious framing choices, the heart and soul of Simien’s script shines through (which may, in fact, suggest that Simien may be a better screenwriter than a director, but that’s a discussion for another time). In a way, it’s the artistic shortcomings of the film that inadvertently contribute to the strength of it’s message: this movie doesn’t ultimately have the answers, either creatively or on it’s subject matter. But that’s beside the point. Not knowing all the answers, not having perfected presentation doesn’t invalidate the voice that is speaking. It doesn’t take smooth, seasoned directorial ability for a black man to discuss, through visual storytelling, that which is of fundamental importance to himself and others like him. It’s a bold statement by Simien, one that puts into more flattering perspective the film’s more amateurish, minor sins.

One of the most fascinating components is how it never bothers to draw a line in regards to what counts as “valid” blackness. Blackness is a deeply diverse experience that encompasses all backgrounds, sexualities and political ideologies, and Dear White People walks a tricky tightrope where it never undersells or invalidates any one of them. Black experience, no matter what form it takes, is black experience in this film. Even if that black experience wants nothing to do with the larger black community. Simien wisely never feels the need to validate any of the various black experiences, they don’t need to “earn” blackness in order to qualify. This is a film about black people, therefore all experiences of the black characters within are, by default, valid. In a move that is sure to rile some of the more prickly black audience members, the film gives it’s primary spotlight to a mixed-race girl who’s in a relationship with a white TA and a young gay black man who spends most of the film interacting with white people. By focusing expressly on these two characters, though not to the exclusion of others, Dear White People diplomatically removes itself from the “traditionally black” corner, opting instead to focus on two black people who don’t quite fit in with the culture they were born into and are struggling to find their place, in their own separate ways. It’s through these two limbo children that we experience the racially-motivated conflict that takes place on the Winchester campus, and it’s their lack of concrete identity that allows Simien’s screenplay to extend empathy to all of the characters that otherwise populate the film (I say empathy rather than sympathy, as there are quite a few unsympathetic characters in this piece). As a tale of cultural reaction, there’s no better way to experience this war of reactionary identities than through those who haven’t yet figured out how they’re “supposed” to react. It’s a brilliant subversion of the classical idea of a “black” film. There’s no cultural demographic being pandered to here because the leading characters themselves don’t really “belong” to a demographic to be pandered to. It’s an experience that’s bound to alienate many a viewer from the African American sphere, but it’s also a calculated risk that gives Simien the opportunity to cut the subject he’s intending to address down to the bone.

In many ways, Dear White People is cinema’s first clear-cut staple of post-black filmmaking. It accepts no labels and but wholly embraces all forms of blackness as a cultural experience. It’s out to ask questions, not provide answers or even solutions. It’s first and foremost agenda is honesty. To cut through preconceived ideas and antiquated notions about racial identity, then leave the newly opened space vacant for each viewer to reach their own personal conclusion. Nobody other than you can tell you “what it means” to be black or to be white or to be Asian or Latino or what have you. Dear White People simply aspires to clear the path of conflicting, angry ideas so that it’s characters, and the viewers they represent, can discover their own answer for themselves.

Many white people won’t get it, many black people will hate it. But Dear White People offers no apologies for what it is and what it has to say. In this new era of post-Obama American race relations, it’s time to clear the slate and reassess what it really means to be a black face in a white place, and Justin Simien’s imperfect but bold little fable is passionately leading that charge.