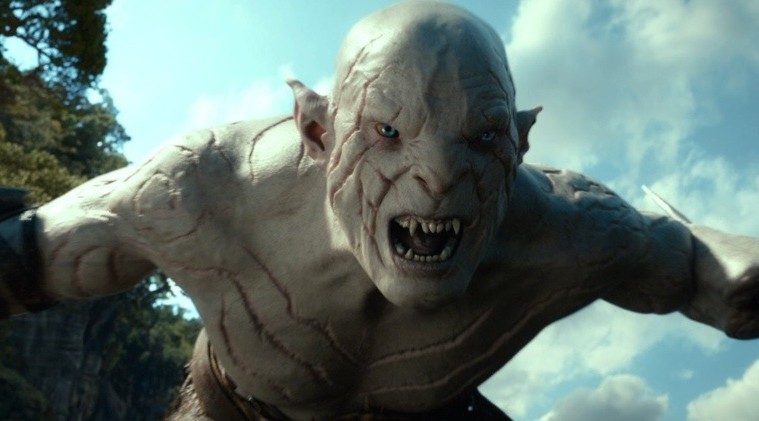 Over the past few years a debate has slowly, but steadily been growing amongst the filmmaking and film-enthusiast communities: in this age of slick CGI, how much CGI is too much CGI? And are the vibrant CGI worlds that film makers like James Cameron, George Lucas and Peter Jackson have utilized really an adequate substitute for old-school techniques? What about motion capture? We’ve seen a lot of it and none of it quite looks like real life. Where do we draw the line between CGI characters and characters created with practical effects?

After a lot of movie-viewing and a considerable amount of thought, I figured that for my first Viewfinder column, I may as well throw my two-cents in on the issue. Let me posit this theory: visual effects need not be “realistic”, so long as they aesthetically support the film they’re in.

The best and most relevant example I can think of for this argument is Peter Jackson’s ongoing Hobbit trilogy. Amongst other complaints, one of the primary criticisms lodged at The Hobbit is a purported overuse of motion-captured CGI characters and greenscreened backdrops. Numerous characters: Orc antagonist Azog “The Defiler”, The Great Goblin King as well as his diminutive cronies, have been targeted by some critics and fans as “unrealistic” looking. First and foremost, in the case of Azog I think it’s worth noting that the character experienced something of a late redesign after many of his scenes were already filmed. The original scenes had a different character design accomplished with practical make up effects in the Azog role. Peter Jackson felt the character lacked presence (after seeing the behind the scenes features, I’m very much inclined to agree) and so had him redesigned as a motion captured creation with the original design and character being relegated to the role of Yazneg, the Orc lieutenant that Azog (somewhat symbolically) kills be feeding to some of his wargs. The end result is something of an unfinished effect, with Azog lacking the same level of lighting and texture detail that some of the other characters had (although I would still argue the finished version still leaves a significantly more powerful impression than the original did).

But there still remains the other characters: the goblins of the Misty Mountains and such. Do they look realistic? No, they don’t. But I don’t think they needed to. First and foremost, I think it’s worth noting that The Hobbit is based on a book for kids. It’s a story where trolls have arguments over how sit on their victims and squash them into jelly, a story where goblins sing rousing musical numbers, a story where our protagonist beats his foe not in a battle of swords but a game of riddles. Frankly, this story, were it to be disconnected from the established Lord of the Rings trilogy, would work quite well as an animated family film (and it originally was, in Ralph Bakshi’s 1977 adaptation). But we had Rings, and so now we have our prequel to it, which has to stay true to both the established world and the massively differing tone of its source material. The solution? Finding a balance of tone and style between the two of them, make it a live-action/animation hybrid. “Why turn your live action film into a cartoon?”, you may ask. Well why make animation at all? Animation expresses something that goes further than the limits life has afforded us to express something literally that would otherwise be nuanced or subtextual. And a story as larger than life and fantastical as The Hobbit dies the second it’s constrained by “reality”. Why CGI your goblins? Well, the extended version reveals that they actually sing a legitimate musical number (one which establishes the tone of the scene much better than the theatrical version). How on earth are you going to have a city of singing goblins who are all actors in full prosthetic make up? You can’t, it’s ridiculous. Jackson wisely decided to embrace the inherently exaggerated and animated nature of the story and just straight up over-stylize and animate his characters. Do they look “realistic”? Of course not! Nor should they. There really is no way to take a character design as absurd as the one for the Great Goblin and turn it into a “believable”, “realistic” effect like the designs in the original Lord of the Rings trilogy.

CGI: The Goblin King from THE HOBBIT

It may also be worth noting, that from a narrative standpoint, The Hobbit takes place in a significantly different time period than The Lord of the Rings. The Hobbit films are addressing the rise and return of Sauron into Middle-Earth. So by the time the events of The Lord of the Rings rolls around, the world has slowly been decayed by Sauron’s evil, resulting in the more subtle, muted look and color palette we see in Rings. Fans will recall that Fellowship of the Ring itself opens with Galadriel’s narration: “The world is changed. I feel it in the water. I feel it in the earth. I smell it in the air.” Establishing an intentional contrast between this world and the vibrant, saturated, exaggerated world of The Hobbit.

Motion captured Gollum from THE HOBBIT

Of course, this argument won’t sway many. “If it doesn’t look “real” then it’s just no good.” is a common rhetoric. But really, when have films ever looked really “real”? People don’t love practical make up effects because they always look more “real” than motion capture, they’re simply variant of “fake looking” that has been endeared to many through childhood experiences with films. One good example of this, I think, would be Guillermo del Toro’s Hellboy films, or, more specifically, Hellboy II: The Golden Army. Golden Army is positively filled to the brim with wonderful character designs and practical effects work. I love that movie almost entirely for its design and how well constructed the world is. But, if I’m being honest, nothing actually looks “real” in Hellboy. From the clunky, animatronic facial movements, to the slow reaction time of stunt actors wandering around in suits that have blinded them, to the distinct plasticky texture of the fantastical characters skin: Hellboy himself is probably the biggest offender in this regard, his skin and face looks about as “lifelike” as your average GI Joe action figure. And still, I would say there is nothing “wrong” with how this movie looks. “Real”? Absolutely, positively, not even close. But del Toro put his heart and soul into these character designs and what ends up onscreen fits the world he has laboriously created. All these costumes and muppets support the film stylistically despite not looking “real” in the slightest, and so they do their job wonderfully.

A scene from HELLBOY 2: THE GOLDEN ARMY

“But hold on” you might say, “practical effects have a more real, tangible weight to them than CGI, they have real texture to them.” To which I say: you’re absolutely right. But let’s apply that same train of thought to motion capture: motion captured CGI offers a significantly wider range of physical motion and facial expression. In a movie like The Hobbit, where comedy plays just as important of a role as drama, smooth facial expression is absolutely key to telling the story. Same thing can even be said of Azog “The Defiler”. During his final confrontation with Thorin in An Unexpected Journey, the Orc commander expresses more emotional range than all of the orcs in Lord of the Rings combined, and given that he’s Thorin’s primary antagonist for this whole trilogy of movies, that level of expression is absolutely necessary in selling the burning conflict between the two of them. The decision between motion-captured CGI and heavy practical make-up effects really is a toss-up. Neither look “real”, although characters on both sides of that arena such as Pan from Pan’s Labyrinth and Gollum have come very, very close. It entirely depends on what the filmmaker is trying to communicate in each case, what is important to them to tell the story they want to tell. Unfortunately, CGI and motion capture get far more flack than often-celebrated practical effects work, celebrated above CGI simply for being a more familiar sort of “fake” that audiences (older audiences, in particular) are more actively ready and willing to accept. This will change as a new generation of film makers who grew up on a different set of films starts stepping up to make their own work, but in the meantime I fear that many gorgeous and wonderful films are being thrown under the bus by many in the film community out of commitment to arbitrary prejudices. Until a time comes when CGI becomes so refined it eclipses the need for practical effects (which, in many ways, I don’t think it will), it’s good for fantasy and sci-fi flicks to use a healthy balance of all the tools afforded to them. Both The Hobbit and Hellboy II lean on one kind of effect as opposed to the other, but neither does away with the other entirely, and as it is right now, that’s for the best. Jackson’s love of digital effects and del Toro’s love of practical gives each of their films personality and flavor, but each film maker is intelligent and tactful enough to know when the other type of effect will be necessary to accomplish the story they’re trying to tell.

As the release of The Hobbit: The Desolation of Smaug nears (approximately one week from today), perhaps we should all try appreciating what this film is trying to communicate rather than become fixated on whether it looks “realistic” or not. None of it is real, very little of it has ever looked real. So with that in mind, I think it’s time we all put a little more effort into embracing the world these film makers have lovingly labored over. It’s all a massive, wonderful game of “pretend”, it’s time we started playing along again.