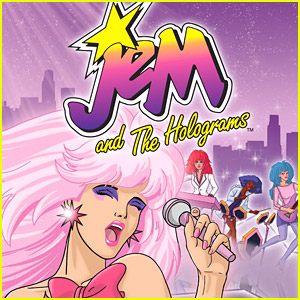 Back in the 1980’s, Saturday was truly a sabbath for every person my age who grew up with a TV. Not only did we have a double feature of WWF wrestling in the form the Superstars of Wrestling on FOX from 11AM to 1PM and then Saturday Night’s Main Event on NBC from 9PM to 11PM,  we also had Saturday morning cartoons. The animation was beautiful, the opening theme music was both catchy and cheesy, but it had a broad appeal across genders. Jem and The Holograms was one such program (well, for me anyway). It ran from the mid-to-late 1980’s and was done by the same company that did the The Transformers and G.I. Joe cartoons.

I liked how the title character was basically a corporate super-hero: By day, she’s Jerrica Benton, a music business CEO of a major-label named Starlight Music. By night, she’s Jem, a musician performing as the lead singer of the Holograms, all of whom are aware of her dual identity. With her bandmates, they fight rival bands and protect Starlight’s technological advancement, Synergy from corporate exploitation via the series’ antagonist, ruthless business executive, Eric Raymond. This technology projects advanced holograms for entertainment purposes, but later on was shown to have offensive and defensive applications. The primary use was for Jerrica to holographically alter herself to become Jem. She uses holographic machinery in her earrings to effectuate the change. Her wealthy socialite businesswoman status coupled with her alter-ego draws parallels to Tony Stark/Ironman. As do her earrings, since Tony Stark was the man who invented the holographic image-inducer in the book.

As with most cartoons from my childhood, Hollywood is now giving this one a live-action makeover. They’ve now released a full trailer for an upcoming film of the same name. Nashville‘s Aubrey Peeples will portray Jem/Jerrica, but check this out: Taking a cue from 2007’s live-action Transformers, the film will feature cameos from Samantha Newark and Britta Phillips, the voice actresses for Jem/Jerrica from the original cartoon. From looking at the trailer, it almost feels like a commentary on how anyone can become rich and famous from posting a video that goes viral on YouTube. The character of Eric Raymond is feminized and portrayed by Juliette Lewis as “Erica Raymond”, possibly a commentary as well on the oft-described soulless and exploitative nature of the music business. The title characters are much younger than their animated counterparts, they’re modernized, and the trailer indicates at an examination of duality without the use of holographic disguises. For some, that right there is a deal-breaker. Me? Meh, the Taylor Swift crowd can have this film. Have a look at the trailer, the film’s set to be released on October 23rd: