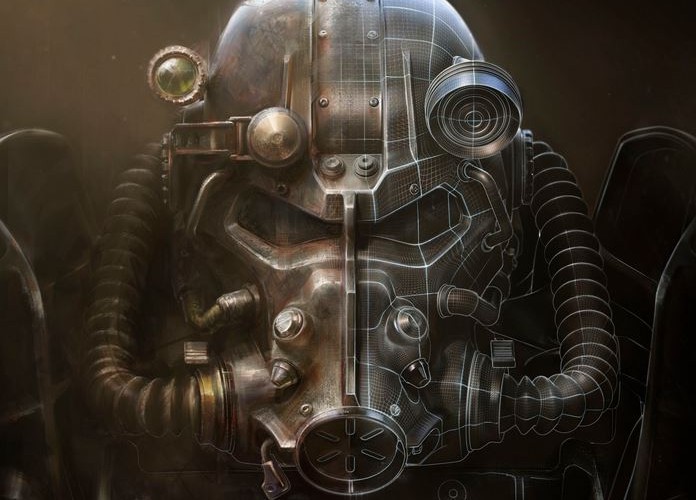 After The Fallout: Our 10 “Favorite” F@cked Up Futures

In honor of this week’s release of Fallout 4 — the latest in a series of exceptional games zeroing in on the disastrous future of humanity (er, and mutants) — each member of the Action A Go Go “task force” shared with me their absolute favorite dystopias, fake utopias, and just plain crappy tomorrows.

This time, we’ve decided to cast a pretty wide net and open the choices up to not just film but games, novels, and comics as well. As you could imagine, with such a smorgasbord of fictional realities at our disposal plenty of “true classics” didn’t make the cut (apologies in advance to any Orwell or Fury Road fans out there). Regardless of whether or not your favorite made the list, I think each of our writers have fantastic reasons for why their picks spoke to them as individuals.

Okay! Let the HUNGER GAMES begin! (Um…that is what they say, right?)

In the distant future of the year 1997 (really), New York has been turned into a giant super max prison. The President of the United States has crashed landed in this giant prison and only one man can save him: Snake Plissken as played by Kurt Russell.

Yes, it’s goofy. Yes, it’s high concept but…oh man is it  fun and chockful of 80s goodness! Escape From New York has all the tropes you need from a movie like this, also: Wild characters, scarce resources, and loads of action. Yep, this John Carpenter classic deserves a place on a post-apocalyptic list any day of the week!

Sometimes I don’t appreciate a movie right away and sometimes I do. What decides this for me regardless of the timing is the movies ability to keep me thinking about it. The Book of Eli kept me thinking, which in my book, is a sign of something good.

The Book of Eli shows a future that has had to begin again from the ground up. Searching for fragments of the past to help re-construct the future is what some people choose to determine their path. Eli has a book in his possession that he believes is the key to accomplishing a just future for all humanity. His faith in this book’s teachings is so resolute that others are determined to be the ones with it in their possession.

This film details what man has done since the Bible was written. Its commands were practiced, disobeyed and spread across the land by those who believed they were set in place by divinity. Eli, like men of those times, is a missionary. I admire his strength, faith and determination to go through what he goes through to protect and honor what is sacred to him. Denzel Washington shows true conviction in this role while Gary Oldman as the film’s antagonist is downright bad to the bone.

I love the design and scope of the desolate future in The Matrix Trilogy. Visually, the contrasting color schemes of the post-apocalyptic real word and the virtual reality of the Matrix really set them apart from similar settings. The real world has a dark blue tint that evokes the solidness of reality, while the Matrix has a green tint that reminds you of an old computer screen.

Additionally, this futuristic setting sets the stage for an exploration of the relationships between humans and machines. Ultimately asking the question of whether or not humans can survive without technology and vice versa.

If you ask me, possibly the first real post-apocalyptic film, Planet of the Apes plays one of the greatest tricks a movie has ever pulled.

Charlton Heston is an astronaut trapped on a strange world where apes keep humans as pets and workers. From there he plays a game of wits with his captors and hints are given that suggest all is not what it seems. Then…BAM! The ending makes your jaw hit the floor!

I’m sure it helps that when I saw this film I was a child and not jaded by modern special effects and other gimmickry. Sure, the special effects have not aged well but, regardless, Charlton Heston’s performance stands the test of time and the movie (as well as all of its sequels) are much loved to this day.

The explosions, the score, the weapons and characters still captures our imagination, but for me in particular, the apocalyptic future depicted in James Cameron’s two Terminator films carries an appeal that is remains unrivaled.

Cameron’s Los Angeles in 2029 was a dark wasteland with humans fighting a constant war against advanced machines. Cameron gets this point over with eye-popping visuals and plenty of detailed surprises (things like the T-800 endoskeletal machine crushing a human skull in T2 still makes audiences jump).

Still though…I have no desire  to live there.

While the film tried to capture the scope and world-weariness of its source material, there is no substitute for the World War Z novel.

Written by Max Brooks through the eyes of a nameless documentarian, World War Z‘s greatest moments come when Brooks uses his post-apocalyptic backdrop to make subtle observations about our real world conflicts. The narrator of the story off-handedly mentions society-altering events like the quiet exodus of North Koreans from their homeland, the unification of Israel and Palestine, the swift move to protect the interest of the British Royal Family, and the decimation of infected Pakistanis trying to cross the border into Iran.

Like all great stories about the unraveling of society, WWZ understands that the lengths humans will go to to isolate others and self-preserve is just as alarming as any undead horde. 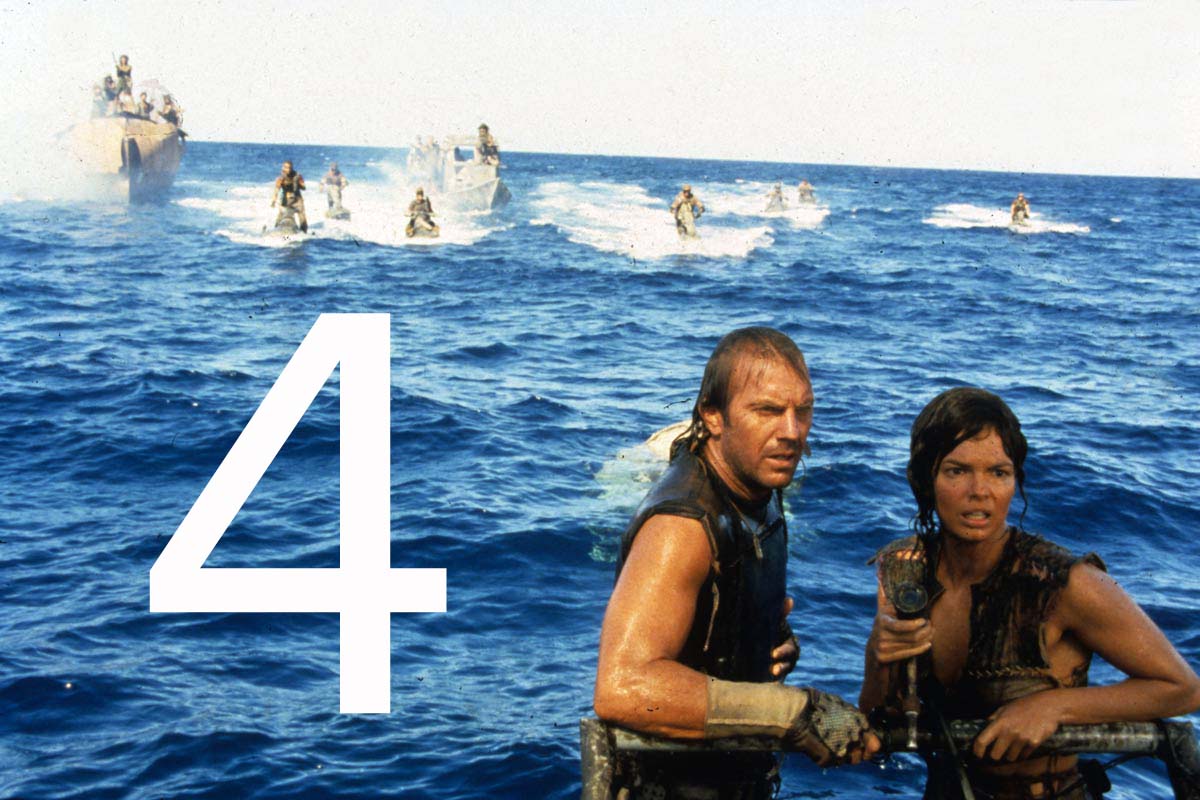 Back in the 90s, when the Kevin Costner vehicle, Waterworld, came out it made quite a splash. (Ha!) Famously over-budget and plagued by production problems, this movie ushered in a new era of studios bragging about the costs of their movies that continues to this day. But if you look past all that hoopla what we have here is a very fun movie that runs with its core concept at full speed and provides what is basically a Mad Max movie on the open seas.

Also, after close to 20 years, there hasn’t been anything that has come as close to unleashing this much filmmaking mayhem on the open water. Period.

The world created by Bethesda Softworks in their Fallout series of games asks the question: Why should the post-apocalypse be so depressing? Sure, there may still be violent shootouts and irradiated mutants trying to kill you, but there’s also a spark of wackiness to the Fallout games (particularly 3 and New Vegas) that one seldom sees in grimmer visions of the future.

This future sees a North America largely wiped out by nuclear devestation, leaving only the those rough or crazy enough to survive. The destruction of society as we know it opens up the door to droves of amusing cults, communities and factions that sprout up in its wake. Ranging from Talon Company, an extremely dangerous roving band of murdering mercenaries, to The Republic of Dave, an isolated democratic nation run by a man named Dave with only five adult members, the world of Fallout is a funny, crazy, scary little universe to play in and explore, that is filled with endless opportunities for adventure around every corner.

A particularly dark and misanthropic story, the film version of the Harlan Ellison novella stars Dennis Quaid as a young adult foraging a desolate wasteland for food and women.

I could be a touch snarky and say it’s a great future because of the explicit need for “studs” in mass impregnation of female members of society.  But really, if survival meant near-starvation while fighting mutants and androids, a sarcastic talking dog named Blood seems like a pretty cool companion to have.

A recent one, so it’s still fresh in my mind.

In Snowpiercer, there’s a level of claustrophobia and a feeling that the outside world can rip you to shreds. The type of battle against man and the elements that I haven’t seen since John Carpenter’s The Thing.

The film takes place inside a train which holds the survivors of a man-made apocalypse after a chemical used to counteract global warming causes an ice age, killing most of life on Earth.The population is broken down by class structure: Poor in the back of the train, the rich and the train’s creator, Wilford, in the front.

Part Metropolis and part The Raid, the bullet train travels over snow and ice frequently, creating an setting of unease that had me holding my breath during enclosed moments of tension and explosive violence. Journeying through each microcosm is a violent, dog-eat-dog adventure in itself. The kind that reminded me a lot of the Bioshock games.

Finally, this ensemble really is the best I’ve seen on screen in years. As Chris Evans and an all-star cast (impressively, this is director Bong Joon-Ho’s first English language feature) go on a violent uprising that is full of fake smiles and sudden threats. 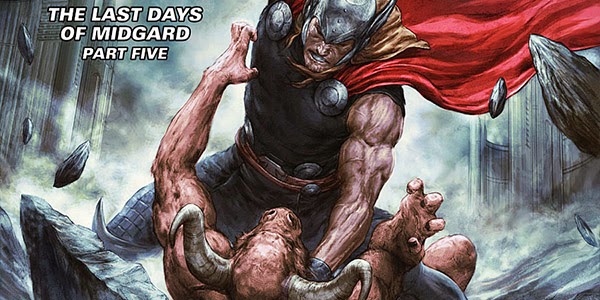 Jason Aaron’s knocked it out of the park with Thor recently, but my favorite arc has to be “The Last Days of Midgard” (issue #19-24). It’s a two-pronged tale, half of which concerns modern day Thor fighting an environmentally malicious corporation headed by an evil Minotaur. The other half of the story is set in the future King Thor at the end of time sitting over a barren, empty Earth completely desolated by the ecological destruction of mankind. It’s this second story where the magic happens.

SPOILER ALERT: To save the barely surviving Earth from a rampaging Galactus, King Thor recovers Gorr the God Butcher’s weapon and becomes Necro-Thor in order to engage in an epic battle. It’s even more nerdgasmically cool than it sounds.

Be sure to let us know what some of your favorite fictional futures are in the comments section below.